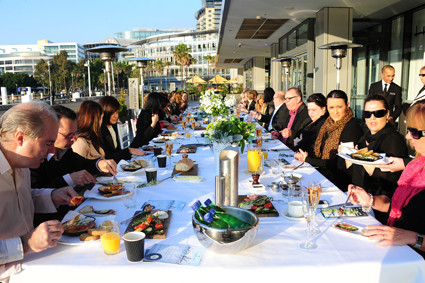 The days are both colder and shorter. Cramming it all in this month meant I even had to get up at six am! This was a world away from my usual caper of staying up until six. I did however get to enjoy a rustic, Italian breakfast by Signorelli Gastronomia as part of the Pyrmont Festival. I learned that dawn does indeed smile upon Pyrmont - go check it out some time.

While we’re talking early starts, I’ve become quite a fan of Be Natural's winter range of breakfast cereals. My nostalgia button was pushed by their delightful Pink Lady Apple and Raspberry Porridge [RRP $4.99], so much so on the second day, I added golden syrup for that real taste of breakfast at grandma’s. It actually didn’t need sweetening... Nor did a super crunchy bowl of Manuka Honey and Spice Clusters with Flakes [RRP $5.49], but they sure kept my tummy happy until well past midday.
www.benatural.com.au

After getting my fingers sticky with the Wild Turkey barbeque sauce emanating from an excellent pulled pork roll served by the new Eat Art Truck roaming the city, I felt inspired to tackle the topic of fast food. It's definitely a good beginning, but I'm itching to see some Sydney-wide improvements to our fast eats.
www.eatarttruck.com

I’m not the only one who thinks this way either! Masterchef evictee Kevin Perry (‘Big Kev’) is throwing his weight behind making a difference to stadium food. He hates both “poor tasting food” and “long lines that force us to miss the game.” Not having set foot in a stadium, I asked my rather well-informed friends what exactly is wrong with stadium grub...

Their main gripe seemed to be cost: “Even if the food is ok, the price is still frightening,” explained Kath. Kitty agreed, mentioning "Sydney Cricket Ground (SCG) and the Sydney Football Stadium have mini Domino's outlets. For an outrageous amount you get a tiny pizza with minimal toppings. One is barely enough to feed a child!” Grey concurred: “For the price, the quality should be well better. The food at the SCG isn't even hot.” Luckily I'm told the SCG have stashed a decent German sausage cart bearing sauerkraut and kranskies “behind the Member's Stand”.

Overall sausages in buns seem to scrub up best, with Candace confidently declaring, “Shark Park at Cronulla is the best stadium for hot dogs.” Down there you’ll get “fried onion and cheese on a long FRESH (very important) roll.” Helga warned non-sausage eating types that: “Vegetarian food is thin on the ground in those places.” Kath added: “veggo options are basically chips and beer. And if the chips are actually hot, it's a win.” So Kevin’s got his work cut out for him, as he takes your complaints direct to the stadiums. Onya Kev.
www.stadiumgrub.com.au

With my June dance card filling rapidly with restaurants and some of the great films on offer at this year’s Sydney Film Festival, I made note of the fact that Crust have just launched a new mobile app. I’m hoping a quick bit of button pushing on my way home from work will ensure pizza arrives during my lightening fast change before I'm off to the theatre...
www.crust.com.au

Granted I should probably be nipping in for a cheap eat in Haymarket. These days, the perfect end to such a dinner is a group foot massage. Before you go thinking something less salubrious, I’m talking about the Liangzi Health Oasis - a place you could actually take your Mum! I headed in for their official opening, and after an awkward if-these-walls-could-talk moment when I realised it was in the old Gas Nightclub, I quite enjoyed watching their team of ninja foot masseurs being drilled in their cute uniforms, whilst eating a barrage of delicious Chefs Gallery canapés. Their crack team of Chinese experts will explain the more serious health benefits, I’ll just add, it’s one place in Sydney that makes joyous cultural revolution seem close indeed.
www.liangzi.com.au
Collapse