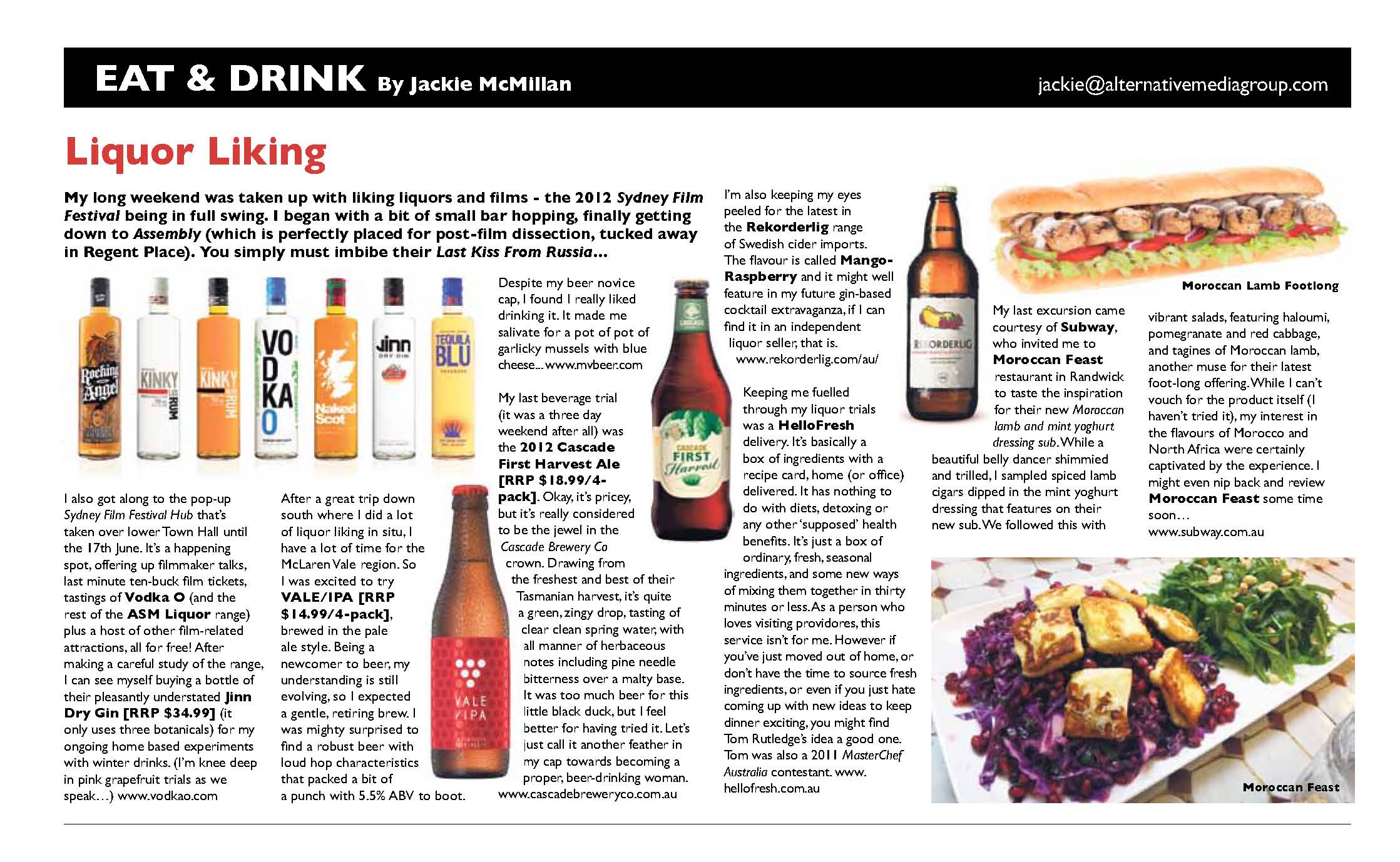 My long weekend was taken up with liking liquors and films - the 2012 Sydney Film Festival being in full swing. I began with a bit of small bar hopping, finally getting down to Assembly (which is perfectly placed for post-film dissection, tucked away in Regent Place). You simply must imbibe their Last Kiss From Russia… 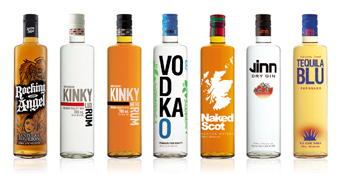 I also got along to the pop-up Sydney Film Festival Hub that’s taken over lower Town Hall until the 17th June. It’s a happening spot, offering up filmmaker talks, last minute ten-buck film tickets, tastings of Vodka O (and the rest of the ASM Liquor range) plus a host of other film-related attractions, all for free! After making a careful study of the range, I can see myself buying a bottle of their pleasantly understated Jinn Dry Gin [RRP $34.99] (it only uses three botanicals) for my ongoing home based experiments with winter drinks. (I’m knee deep in pink grapefruit trials as we speak…)
www.vodkao.com

After a great trip down south where I did a lot of liquor liking in situ, I have a lot of time for the McLaren Vale region. So I was excited to try VALE/IPA [RRP $14.99/4-pack], brewed in the pale ale style. Being a newcomer to beer, my understanding is still evolving, so I expected a gentle, retiring brew. I was mighty surprised to find a robust beer with loud hop characteristics that packed a bit of a punch with 5.5% ABV to boot. Despite my beer novice cap, I found I really liked drinking it. It made me salivate for a pot of pot of garlicky mussels with blue cheese...
www.mvbeer.com

My last beverage trial (it was a three day weekend after all) was the 2012 Cascade First Harvest Ale [RRP $18.99/4-pack]. Okay, it’s pricey, but it’s really considered to be the jewel in the Cascade Brewery Co crown. Drawing from the freshest and best of their Tasmanian harvest, it's quite a green, zingy drop, tasting of clear clean spring water, with all manner of herbaceous notes including pine needle bitterness over a malty base. It was too much beer for this little black duck, but I feel better for having tried it. Let’s just call it another feather in my cap towards becoming a proper, beer-drinking woman.
www.cascadebreweryco.com.au

I’m also keeping my eyes peeled for the latest in the Rekorderlig range of Swedish cider imports. The flavour is called Mango-Raspberry and it might well feature in my future gin-based cocktail extravaganza, if I can find it in an independent liquor seller, that is.
www.rekorderlig.com/au/

Keeping me fuelled through my liquor trials was a HelloFresh delivery. It’s basically a box of ingredients with a recipe card, home (or office) delivered. It has nothing to do with diets, detoxing or any other ‘supposed’ health benefits. It’s just a box of ordinary, fresh, seasonal ingredients, and some new ways of mixing them together in thirty minutes or less. As a person who loves visiting providores, this service isn’t for me. However if you’ve just moved out of home, or don’t have the time to source fresh ingredients, or even if you just hate coming up with new ideas to keep dinner exciting, you might find Tom Rutledge’s idea a good one. Tom was also a 2011 MasterChef Australia contestant.
www.hellofresh.com.au

My last excursion came courtesy of Subway, who invited me to Moroccan Feast restaurant in Randwick to taste the inspiration for their new Moroccan lamb and mint yoghurt dressing sub. While a beautiful belly dancer shimmied and trilled, I sampled spiced lamb cigars dipped in the mint yoghurt dressing that features on their new sub. We followed this with vibrant salads, featuring haloumi, pomegranate and red cabbage, and tagines of Moroccan lamb, another muse for their latest foot-long offering.

While I can’t vouch for the product itself (I haven’t tried it), my interest in the flavours of Morocco and North Africa were certainly captivated by the experience. I might even nip back and review Moroccan Feast some time soon…
www.subway.com.au
www.moroccanfeast.com.au
Collapse