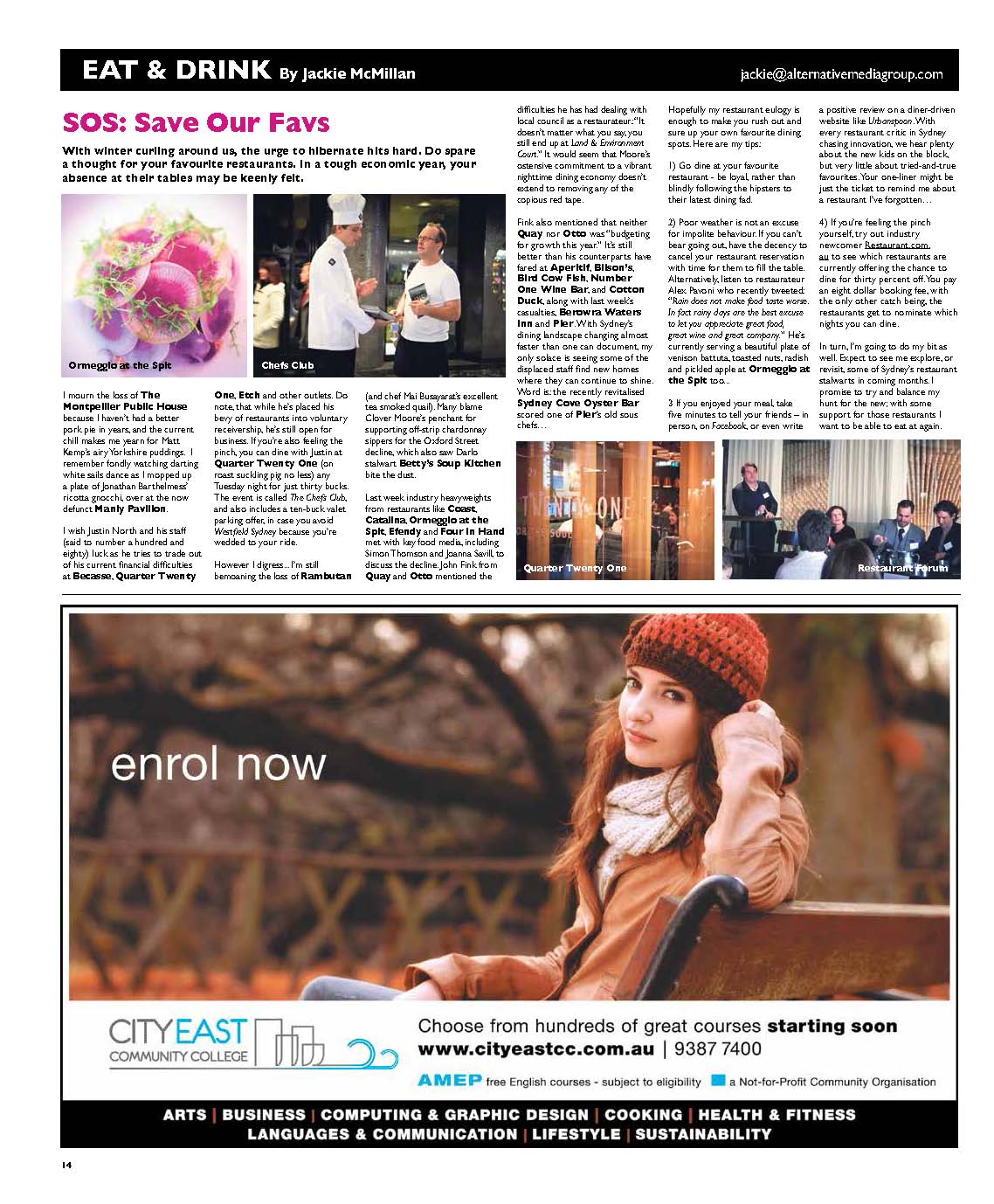 With winter curling around us, the urge to hibernate hits hard. Do spare a thought for your favourite restaurants. In a tough economic year, your absence at their tables may be keenly felt.

I mourn the loss of The Montpellier Public House because I haven’t had a better pork pie in years, and the current chill makes me yearn for Matt Kemp’s airy Yorkshire puddings. I remember fondly watching darting white sails dance as I mopped up a plate of Jonathan Barthelmess’ ricotta gnocchi, over at the now defunct Manly Pavilion.

I wish Justin North and his staff (said to number a hundred and eighty) luck as he tries to trade out of his current financial difficulties at Becasse, Quarter Twenty One, Etch and other outlets. Do note, that while he’s placed his bevy of restaurants into voluntary receivership, he’s still open for business. If you’re also feeling the pinch, you can dine with Justin at Quarter Twenty One (on roast suckling pig no less) any Tuesday night for just thirty bucks. The event is called The Chefs Club, and also includes a ten-buck valet parking offer, in case you avoid Westfield Sydney because you’re wedded to your ride.

Last week industry heavyweights from restaurants like Coast, Catalina, Ormeggio at the Spit, Efendy and Four In Hand met with key food media, including Simon Thomson and Joanna Savill, to discuss the decline. John Fink from Quay and Otto mentioned the difficulties he has had dealing with local council as a restaurateur: "It doesn't matter what you say, you still end up at Land & Environment Court." It would seem that Moore’s ostensive commitment to a vibrant nighttime dining economy doesn’t extend to removing any of the copious red tape.

Fink also mentioned that neither Quay nor Otto was “budgeting for growth this year.” It’s still better than his counterparts have fared at Aperitif, Bilson’s, Bird Cow Fish, Number One Wine Bar, and Cotton Duck, along with last week’s casualties, Berowra Waters Inn and Pier. With Sydney’s dining landscape changing almost faster than one can document, my only solace is seeing some of the displaced staff find new homes where they can continue to shine. Word is: the recently revitalised Sydney Cove Oyster Bar scored one of Pier’s old sous chefs…

Hopefully my restaurant eulogy is enough to make you rush out and sure up your own favourite dining spots. Here are my tips:

1) Go dine at your favourite restaurant - be loyal, rather than blindly following the hipsters to their latest dining fad.
2) Poor weather is not an excuse for impolite behaviour. If you can’t bear going out, have the decency to cancel your restaurant reservation with time for them to fill the table. Alternatively, listen to restaurateur Alex Pavoni who recently tweeted: “Rain does not make food taste worse. In fact rainy days are the best excuse to let you appreciate great food, great wine and great company.” He’s currently serving a beautiful plate of venison battuta, toasted nuts, radish and pickled apple at Ormeggio at the Spit too...

3) If you enjoyed your meal, take five minutes to tell your friends – in person, on Facebook, or even write a positive review on a diner-driven website like Urbanspoon. With every restaurant critic in Sydney chasing innovation, we hear plenty about the new kids on the block, but very little about tried-and-true favourites. Your one-liner might be just the ticket to remind me about a restaurant I’ve forgotten…
4) If you’re feeling the pinch yourself, try out industry newcomer Restaurant.com.au to see which restaurants are currently offering the chance to dine for thirty percent off. You pay an eight dollar booking fee, with the only other catch being, the restaurants get to nominate which nights you can dine.

In turn, I’m going to do my bit as well. Expect to see me explore, or revisit, some of Sydney’s restaurant stalwarts in coming months. I promise to try and balance my hunt for the new; with some support for those restaurants I want to be able to eat at again.
Collapse