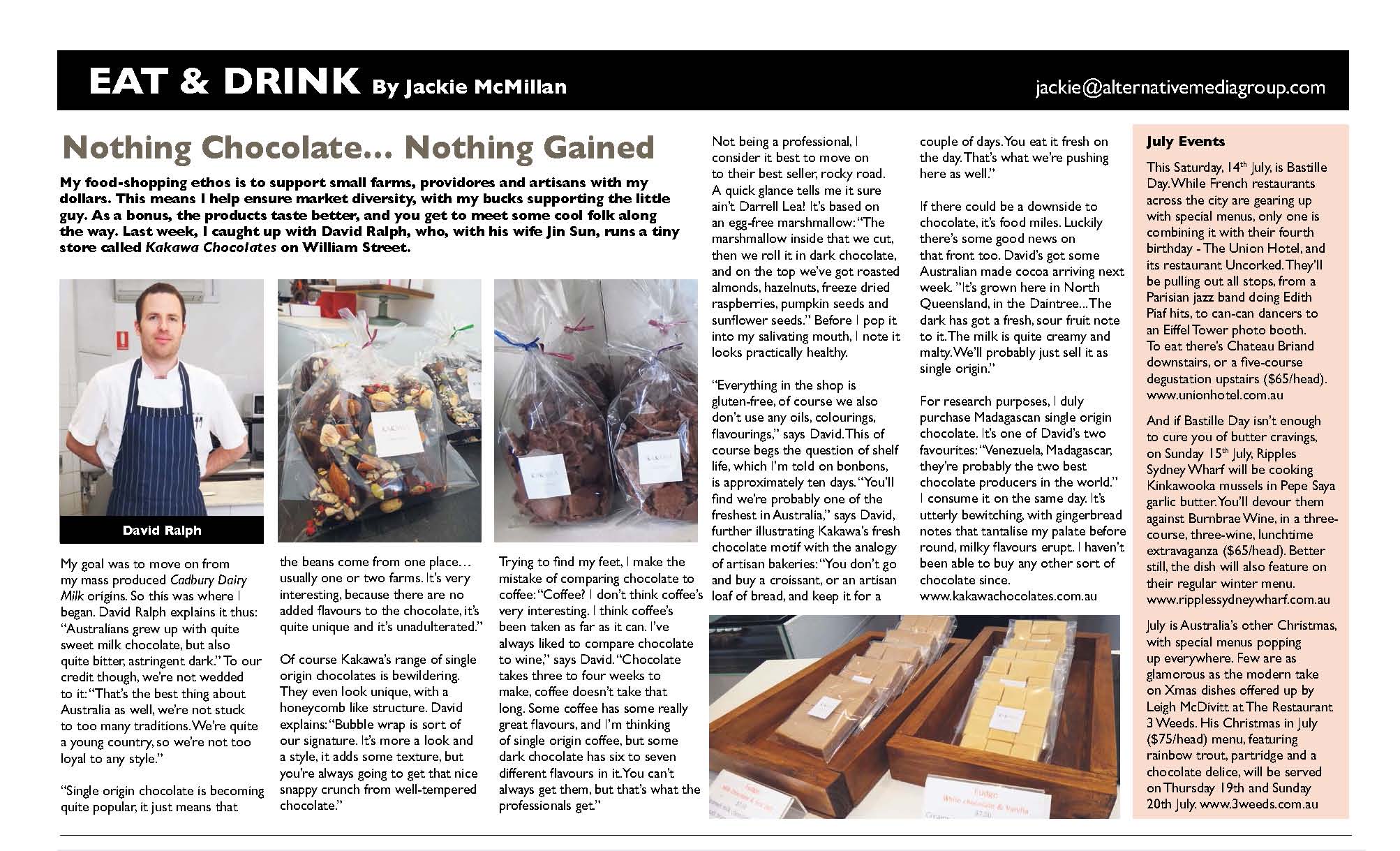 My food-shopping ethos is to support small farms, providores and artisans with my dollars. This means I help ensure market diversity, with my bucks supporting the little guy. As a bonus, the products taste better, and you get to meet some cool folk along the way. Last week, I caught up with David Ralph, who, with his wife Jin Sun, runs a tiny store called Kakawa Chocolates on William Street.

My goal was to move on from my mass produced Cadbury Dairy Milk origins. So this was where I began. David Ralph explains it thus: “Australians grew up with quite sweet milk chocolate, but also quite bitter, astringent dark.” To our credit though, we’re not wedded to it: “That’s the best thing about Australia as well, we’re not stuck to too many traditions. We’re quite a young country, so we’re not too loyal to any style.”

“Single origin chocolate is becoming quite popular, it just means that the beans come from one place… usually one or two farms. It’s very interesting, because there are no added flavours to the chocolate, it’s quite unique and it’s unadulterated.”

Of course Kakawa’s range of single origin chocolates is bewildering. They even look unique, with a honeycomb like structure. David explains: “Bubble wrap is sort of our signature. It’s more a look and a style, it adds some texture, but you’re always going to get that nice snappy crunch from well-tempered chocolate.”

Trying to find my feet, I make the mistake of comparing chocolate to coffee: “Coffee? I don’t think coffee’s very interesting. I think coffee’s been taken as far as it can. I’ve always liked to compare chocolate to wine,” says David. “Chocolate takes three to four weeks to make, coffee doesn’t take that long. Some coffee has some really great flavours, and I’m thinking of single origin coffee, but some dark chocolate has six to seven different flavours in it. You can’t always get them, but that’s what the professionals get.”

Not being a professional, I consider it best to move on to their best seller, rocky road. A quick glance tells me it sure ain’t Darrell Lea! It’s based on an egg-free marshmallow: “The marshmallow inside that we cut, then we roll it in dark chocolate, and on the top we’ve got roasted almonds, hazelnuts, freeze dried raspberries, pumpkin seeds and sunflower seeds.” Before I pop it into my salivating mouth, I note it looks practically healthy.

“Everything in the shop is gluten-free, of course we also don’t use any oils, colourings, flavourings,” says David. This of course begs the question of shelf life, which I’m told on bonbons, is approximately ten days. “You’ll find we’re probably one of the freshest in Australia,” says David, further illustrating Kakawa’s fresh chocolate motif with the analogy of artisan bakeries: “You don’t go and buy a croissant, or an artisan loaf of bread, and keep it for a couple of days. You eat it fresh on the day. That’s what we’re pushing here as well.”

If there could be a downside to chocolate, it’s food miles. Luckily there’s some good news on that front too. David’s got some Australian made cocoa arriving next week. ”It’s grown here in North Queensland, in the Daintree... The dark has got a fresh, sour fruit note to it. The milk is quite creamy and malty. We’ll probably just sell it as single origin.”

For research purposes, I duly purchase Madagascan single origin chocolate. It’s one of David’s two favourites: “Venezuela, Madagascar, they’re probably the two best chocolate producers in the world.” I consume it on the same day. It’s utterly bewitching, with gingerbread notes that tantalise my palate before round, milky flavours erupt. I haven’t been able to buy any other sort of chocolate since.

This Saturday, 14th July, is Bastille Day. While French restaurants across the city are gearing up with special menus, only one is combining it with their fourth birthday - The Union Hotel, and its restaurant Uncorked. They’ll be pulling out all stops, from a Parisian jazz band doing Edith Piaf hits, to can-can dancers to an Eiffel Tower photo booth. To eat there’s Chateau Briand downstairs, or a five-course degustation upstairs ($65/head). www.unionhotel.com.au

And if Bastille Day isn’t enough to cure you of butter cravings, on Sunday 15th July, Ripples Sydney Wharf will be cooking Kinkawooka mussels in Pepe Saya garlic butter. You’ll devour them against Burnbrae Wine, in a three-course, three-wine, lunchtime extravaganza ($65/head). Better still, the dish will also feature on their regular winter menu. www.ripplessydneywharf.com.au

July is Australia’s other Christmas, with special menus popping up everywhere. Few are as glamorous as the modern take on Xmas dishes offered up by Leigh McDivitt at The Restaurant 3 Weeds. His Christmas in July ($75/head) menu, featuring rainbow trout, partridge and a chocolate délice, will be served on Thursday 19th and Sunday 20th July.
www.3weeds.com.au
Collapse