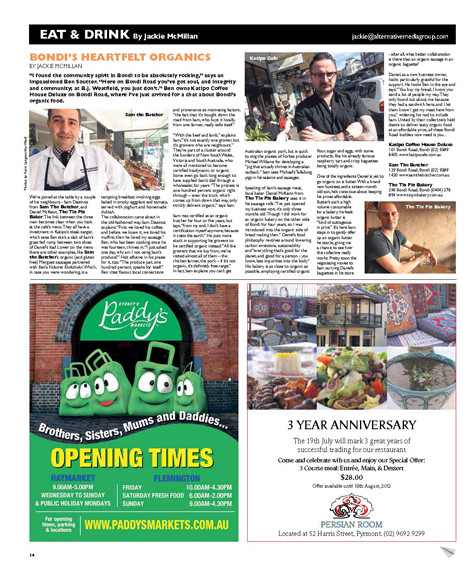 “I found the community spirit in Bondi to be absolutely rocking,” says an impassioned Ben Soutter. “Here on Bondi Road you’ve got soul, and integrity and community; at B.J. Westfield, you just don’t.” Ben owns Katipo Coffee House Deluxe on Bondi Road, where I’ve just arrived for a chat about Bondi’s organic food. 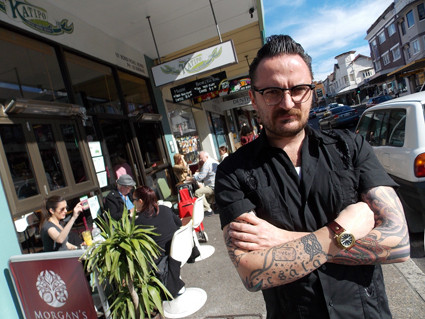 We’re joined at the table by a couple of his neighbours - Sam Diasinos from Sam The Butcher, and Daniel McKeon, The Tin Pin Baker. The link between the three men becomes clear when you look at the café’s menu. They all have a investment in Katipo’s steak sanger, which sees Ben stick a slab of Sam’s grass fed rump between two slices of Daniel’s loaf. Lower on the menu there are other examples, like Sam the Butcher’s organic (and gluten free) Merguez sausages partnered with Ben’s Kickarse Shakshuka. Which, in case you were wondering, is a tempting breakfast involving eggs baked in smoky eggplant and tomato, served with yoghurt and homemade dukkah.

The collaboration came about in the old-fashioned way, Sam Diasinos explains: “First we loved his coffee; and before we knew it, we loved his muffins; then he loved my sausage.” Ben, who has been cooking since he was fourteen, chimes in: “I just asked one day, why am I not using Sam’s produce?” He’s effusive in his praise for it, too: “The produce just, one hundred percent, speaks for itself.” Ben cites flavour, local connections and provenance as motivating factors, “the fact that it’s bought down the road from Sam, who buys it locally, from one farmer, really sells itself.”

“With the beef and lamb,” explains Sam, “it’s not exactly one grower, but it’s growers who are neighbours.” They’re part of a cluster around the borders of New South Wales, Victoria and South Australia, who were all mentored to become certified biodynamic or organic. Some even go back long enough to have supplied Sam’s dad through a wholesaler, for years. “The process is one hundred percent organic right through – even the truck which comes up from down that way, only strictly delivers organic,” says Sam.

Sam was certified as an organic butcher for four or five years, but says, “from my end, I don’t have a certification myself anymore, because it costs the earth.” He puts more stock in supporting his growers to be certified organic instead. “All the growers that we buy from, we’ve visited almost all of them – the chicken farmer, the pork – if it’s not organic, it’s definitely free-range.” In fact, Sam explains you can’t get Australian organic pork, but is quick to sing the praises of Forbes producer Michael Williams for developing a “pig that actually thrives in Australian outback.” Sam uses Michael's Tallabung pigs in his salamis and sausages.

Speaking of Sam’s sausage meat, local baker Daniel McKeon from The Tin Pin Bakery uses it in his sausage rolls. “I’ve just opened my business now, it’s only three months old. Though I did work for an organic bakery on the other side of Bondi for four years, so I was introduced into the organic side of bread making then.” Daniel’s food philosophy revolves around lowering carbon emissions, sustainability and “everything that’s good for the planet, and good for a person - you know, less impurities into the body.” His bakery is as close to organic as possible, employing certified organic flour, sugar and eggs, with some products, like his already famous raspberry tart and crisp baguettes being totally organic.

One of the ingredients Daniel is yet to go organic on is butter. With a brand new business, and a sixteen-month old son, he’s conscious about keeping his prices affordable. Butter’s such a high volume consumable for a bakery; he feels organic butter is “kind of outrageous in price.” It’s here Sam steps in to gently offer up an organic butter he stocks, giving me a chance to see how this collective really works. Pretty soon the negotiating moves to Sam carrying Daniel’s baguettes in his store - after all, what better collaboration is there than an organic sausage in an organic baguette?

Daniel, as a new business owner, looks particularly grateful for the support. He looks Ben in the eye and says: “You buy my bread, I know you send a lot of people my way. They only found out about me because they had a sandwich here, and I let them know I get my meat here from you,” widening his nod to include Sam. United by their collectively held desire to deliver tasty, organic food at an affordable price, all these Bondi Road buddies now need is you...