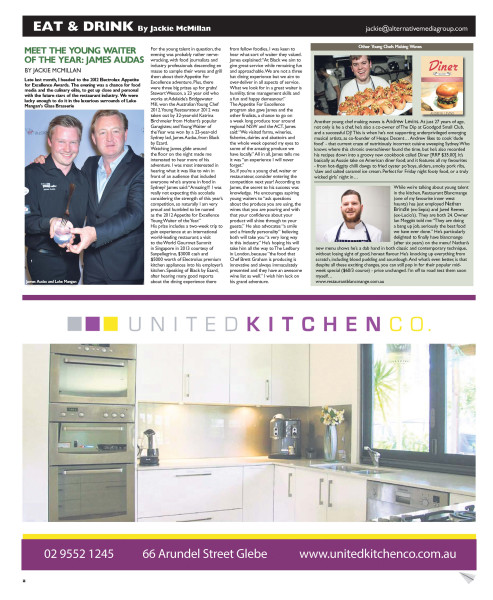 Late last month, I headed to the 2012 Electrolux Appetite for Excellence Awards. The evening was a chance for food media and the culinary elite, to get up close and personal with the future stars of the restaurant industry. We were lucky enough to do it in the luxurious surrounds of Luke Mangan's Glass Brasserie.

For the young talent in question, the evening was probably rather nerve-wracking, with food journalists and industry professionals descending en masse to sample their wares and grill them about their Appetite For Excellence adventure. Plus, there were three big prizes up for grabs! Stewart Wesson, a 23 year old who works at Adelaide’s Bridgewater Mill, won the Australian Young Chef 2012. Young Restaurateur 2012 was taken out by 32-year-old Katrina Birchmeier from Hobart’s popular Garagistes; and Young Waiter of the Year was won by a 23-year-old Sydney lad, James Audas, from Black by Ezard. 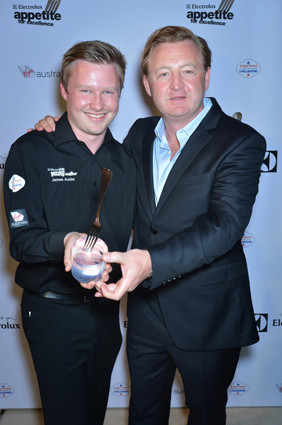 Watching James glide around the floor on the night made me interested to hear more of his adventure. I was most interested in hearing what it was like to win in front of an audience that included everyone who’s anyone in food in Sydney? James said: “Amazing!!! I was really not expecting this accolade considering the strength of this year’s competition, so naturally I am very proud and humbled to be named as the 2012 Appetite for Excellence Young Waiter of the Year.”

His prize includes a two-week trip to gain experience at an international world-leading restaurant; a visit to the World Gourmet Summit in Singapore in 2013 courtesy of Sanpellegrino, $3000 cash and $5000 worth of Electrolux premium kitchen appliances into his employer’s kitchen. Speaking of Black by Ezard, after hearing many good reports about the dining experience there from fellow foodies, I was keen to hear what sort of waiter they valued. James explained: “At Black we aim to give great service while remaining fun and approachable. We are not a three hat dining experience but we aim to over-deliver in all aspects of service. What we look for in a great waiter is humility, time management skills and a fun and happy demeanour.”

The Appetite For Excellence program also gave James and the other finalists, a chance to go on a week long produce tour around regional NSW and the ACT. James said: “We visited farms, wineries, fisheries, dairies and abattoirs and the whole week opened my eyes to some of the amazing produce we have locally.” All in all, James tells me it was “an experience I will never forget.”

So, if you’re a young chef, waiter or restaurateur, consider entering the competition next year! According to James, the secret to his success was knowledge. He encourages aspiring young waiters to “ask questions about the produce you are using, the wines that you are pouring and with that your confidence about your product will shine through to your guests.” He also advocates “a smile and a friendly personality” believing both will take you “a very long way in this industry.” He’s hoping his will take him all the way to The Ledbury in London, because “the food that Chef Brett Graham is producing is innovative and always immaculately presented and they have an awesome wine list as well.” I wish him luck on his grand adventure.

While we’re talking about young talent in the kitchen, Restaurant Blancmange (one of my favourite inner west haunts) has just employed Nathan Brindle (ex-Sepia) and Jared Reeves (ex-Lucio’s). They are both 24. Owner Ian Meggitt told me: “They are doing a bang up job, seriously the best food we have ever done.” He’s particularly delighted to finally have blancmange (after six years) on the menu! Nathan’s new menu shows he’s a dab hand in both classic and contemporary technique, without losing sight of good, honest flavour. He’s knocking up everything from scratch, including blood pudding and sourdough. And what’s even better, is that despite all these exciting changes, you can still pop in for their popular mid-week special ($60/3 course) - price unchanged. I’m off to road test them soon myself…
www.restaurantblancmange.com.au

Another young chef making waves is Andrew Levins. At just 27 years of age, not only is he a chef, he’s also a co-owner of The Dip at Goodgod Small Club, and a successful DJ! This is, when he’s not supporting underprivileged emerging musical artists, as co-founder of Heaps Decent! Andrew likes to cook ‘dude food’ - that current craze of nutritiously incorrect cuisine sweeping Sydney pubs and bars. Who knows where this chronic overachiever found the time, but he’s also recorded his recipes down into a groovy new cookbook called Diner [RRP $35.00]. It’s basically as Aussie take on American diner food; and it features all my favourites - from hot-diggity chilli dawgs to fried oyster po’boys, sliders, smoky pork ribs, ‘slaw and salted caramel ice cream. Perfect for Friday night footy food, or a wicked girls’ night in…