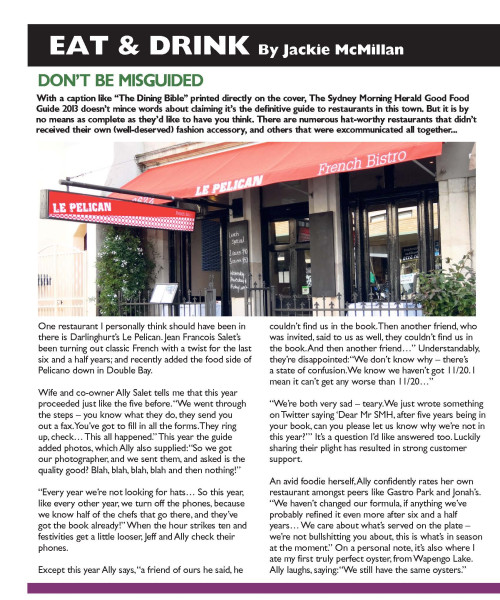 With a caption like “The Dining Bible” printed directly on the cover, The Sydney Morning Herald Good Food Guide 2013 doesn’t mince words about claiming it’s the definitive guide to restaurants in this town. But it is by no means as complete as they’d like to have you think. There are numerous hat-worthy restaurants that didn’t receive their own (well-deserved) fashion accessory, and others that were excommunicated all together…

One restaurant I personally think should have been in there is Darlinghurt’s Le Pelican. Jean Francois Salet’s been turning out classic French with a twist for the last six and a half years; and recently added the food side of Pelicano down in Double Bay. 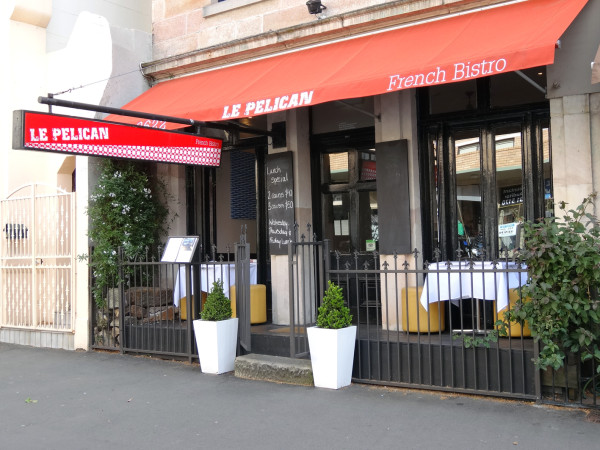 Wife and co-owner Ally Salet tells me that this year proceeded just like the five before. “We went through the steps - you know what they do, they send you out a fax. You’ve got to fill in all the forms. They ring up, check… This all happened.” This year the guide added photos, which Ally also supplied: “So we got our photographer, and we sent them, and asked is the quality good? Blah, blah, blah, blah and then nothing!”

“Every year we’re not looking for hats… So this year, like every other year, we turn off the phones, because we know half of the chefs that go there, and they’ve got the book already!” When the hour strikes ten and festivities get a little looser, Jeff and Ally check their phones.

“We’re both very sad - teary. We just wrote something on Twitter saying ‘Dear Mr SMH, after five years being in your book, can you please let us know why we’re not in this year?’” It’s a question I’d like answered too. Luckily sharing their plight has resulted in strong customer support.

An avid foodie herself, Ally confidently rates her own restaurant amongst peers like Gastro Park and Jonah’s. “We haven’t changed our formula, if anything we’ve probably refined it even more after six and a half years… We care about what’s served on the plate – we’re not bullshitting you about, this is what’s in season at the moment.” On a personal note, it’s also where I ate my first truly perfect oyster, from Wapengo Lake. Ally laughs, saying: “We still have the same oysters.”