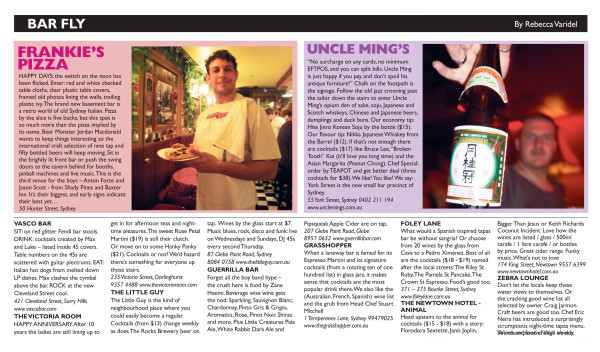 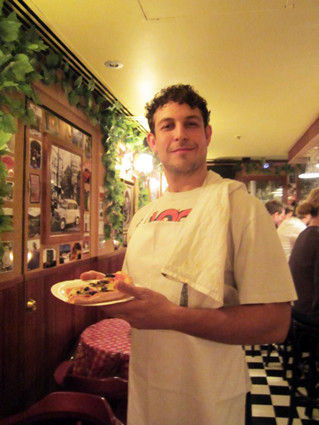 FRANKIE’S PIZZA
50 Hunter Street, Sydney (ED: So new, they don’t even have a Facebook page!)
HAPPY DAYS: the switch on the neon has been flicked. Enter: red and white checked table cloths, clear plastic table covers, framed old photos lining the walls, trailing plastic ivy. The brand new basement bar is a retro world of old Sydney Italian. Pizza by the slice is five bucks, but this spot is so much more than the pizza implied by its name. Beer Monster Jordan Macdonald wants to keep things interesting so the international craft selection of nine tap and fifty bottled beers will keep moving. Sit in the brightly lit front bar or push the swing doors to the cavern behind for booths, pinball machines and live music. This is the third venue for the boys – Anton Forte and Jason Scott - from Shady Pines and Baxter Inn. It’s their biggest, and early signs indicate: their best yet…

UNCLE MING’S
55 York Street, Sydney (0402) 211 194 www.unclemings.com.au
“No surcharge on any cards, no minimum EFTPOS, and you can split bills. Uncle Ming is just happy if you pay and don’t spoil his antique furniture!” Chalk on the footpath is the signage. Follow the old jazz crooning past the tailor down the stairs to enter Uncle Ming’s opium den of sake, soju, Japanese and Scotch whiskeys, Chinese and Japanese beers, dumplings and duck buns. Our economy tip: Hite Jinro Korean Soju by the bottle ($15). Our flavour tip: Nikka Japanese Whiskey from the Barrel ($12). If that’s not enough there are cocktails ($17) like Bruce Lee, “Broken Tooth” Koi (it’ll love you long time) and the Asian Margarita (Peanut Chong). Chef Special: order by TEAPOT and get better deal (three cocktails for $38). We like! You like! We say: York Street is the new small bar precinct of Sydney.