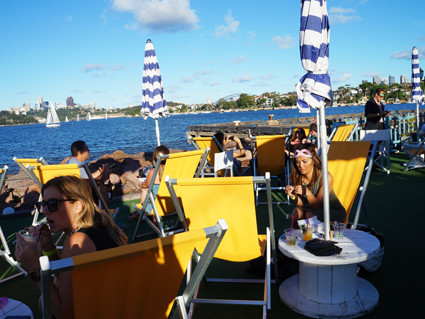 THE ISLAND BAR
Cockatoo Island (0420) 220 885 theislandbar.com.au
Getting shipwrecked at an island bar might just be my number one fantasy (if you don’t count the foot fetish, that is). Though in the open-air setting of Cockatoo Island: I satisfied both. I got my groove on dancing barefoot last Friday night to the New Orleans sounds of the Blue Tongue Brass Band, with a mint julep or two to keep me company. Before you get too excited I’ll admit, I was wearing something - shiny beads and a mask to get me in the Mardi Gras mood. The Bourbon Street festival was just one of the themed happenings at The Island Bar between now and the end of April. Getting shipwrecked required a ferry ride but I was more sensible at the end of the night and indulged in a Makers Mark-induced water taxi home.

CAKE WINES TROPFEST POP-UP
77 George Street, Sydney Facebook: CakeWines
Pop-ups are one of the best things about Sydney at the moment, opening up versatile venues to keep our drinking mojo at its peak. Cake Wines has partnered with the amazing Tropfest film festival in a bouncy underground sandstone bunker bar in one of Australia’s oldest warehouses in The Rocks. Opening night this BAR FLY had the first glass of wine, Cake Wines Rosé, and watched the venue fill to capacity within its first hour. It’s enough to make the morose John Malkovich happy. Adelaide Hills Cake Wines Shiraz, Rosé, Pinot Noir, Sauvignon Blanc and Pinot Grigio by the glass or bottle, Four Pines Pale Ale, Apple Thief William Pear Cider and pizza are on offer. Online bookings are available through Facebook for nightly events – such as Wok+Wine 21st February - and for the closing party on the 2nd March.
Collapse