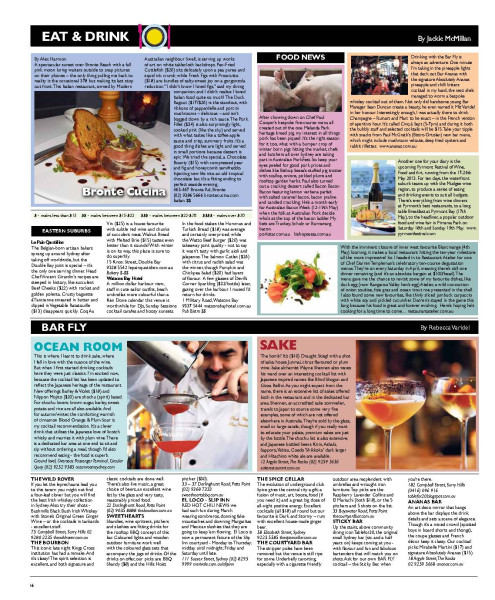 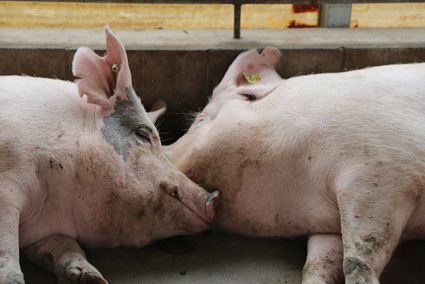 After chowing down on Chef Paul Cooper’s bespoke five-course menu all created out of the one Melanda Park heritage breed pig, my interest in all things pork has been piqued. It’s the right season for it too, what with a bumper crop of winter born pigs hitting the market, chefs and butchers all over Sydney are taking part in Australian PorkFest. So keep your eyes peeled for good pork prices and dishes like Bishop Sessa’s stuffed pig trotter with scallop, onions, pickled plums and rooftop garden herbs. Paul also turned out a cracking dessert called Bacon Bacon Bacon featuring lemon verbena parfait with salted caramel bacon, bacon praline and candied crackling. He’s a month early for Australian Bacon Week (12-19th May) when the folk at Australian Pork decide who's at the top of the bacon ladder. My bets are Trunkey, Schulz or Burrawang bacon.
porkstar.com.au
bishopsessa.com.au

Another one for your diary is the upcoming Pyrmont Festival of Wine, Food and Art, running from the 17-26th May 2013. For ten days, the waterfront suburb teams up with the Mudgee wine region, to produce a series of eating and drinking events to suit all budgets. There’s everything from wine dinners at Pyrmont’s best restaurants, to a long table Breakfast at Pyrmont Bay (17th May), to the headliner, a popular outdoor food and wine fair in Pirrama Park on Saturday 18th and Sunday 19th May.
www.pyrmontfestival.com

Drinking with the Bar Fly is always an adventure. One minute I’m taking in the pineapple lights that deck out Bar Ananas with the signature Absolutely Ananas pineapple and chilli bitters cocktail in my hand, the next she’s managed to worm a bespoke whiskey cocktail out of them. Not only did handsome young Bar Manager Sean Duncan create a beauty, he even named it Miz Varidel in her honour. Interestingly enough, I was actually there to drink Champagne – Ruinart and Marc to be exact – in the French version of aperitivo hour. It’s called Cinq à Sept (5-7pm) and during it both the bubbly stuff and selected cocktails will be $15. Take your tipple with snacks from Paul McGrath’s (Bistro Ortolan) new bar menu, which might include mushroom veloute, deep fried oysters and rabbit rillettes.
www.ananas.com.au

With the imminent closure of inner west favourite Blancmange (4th May) looming, it makes a local restaurant hitting the ten-year milestone all the more impressive! So I headed in to Restaurant Atelier for one of Chef Darren Templeman’s celebratory ten-course degustation menus. They’re on every Saturday in April, meaning there’s still one dinner remaining (and it’s an absolute bargain at $100/head). The menu gave me the chance to revisit some of my favourite dishes, like duck egg (now Kangaroo Valley hen’s egg) Atelier, a wild concoction of onion soubise, foie gras and ocean trout roe presented in the shell. I also found some new favourites, like thinly sliced jumbuck carpaccio with white soy and pickled cucumber. Darren’s stayed in the game this long because his food is great and forever evolving. Here’s hoping he’s cooking for a long time to come...
restaurantatelier.com.au
Collapse