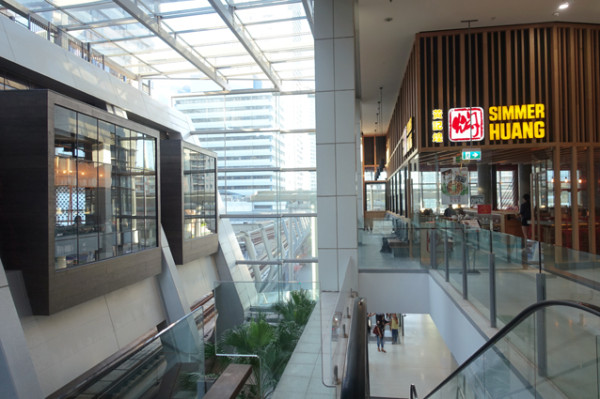 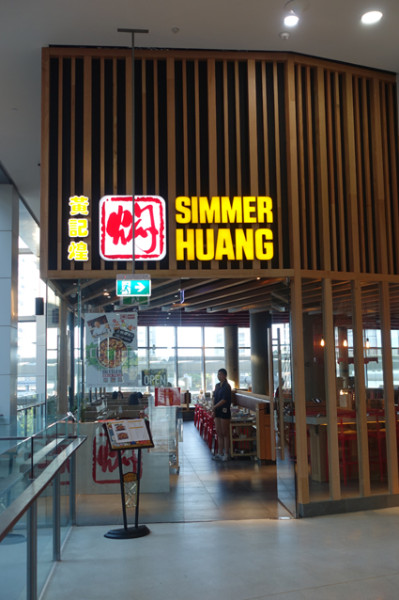 Hovering above Chatswood Station, The District is a futuristic food court you’re going to want to visit. Suppressing the urge to parkour, I explored the colourful indoor ‘laneways’ on foot - earmarking a few Asian street food outlets for a return visit. 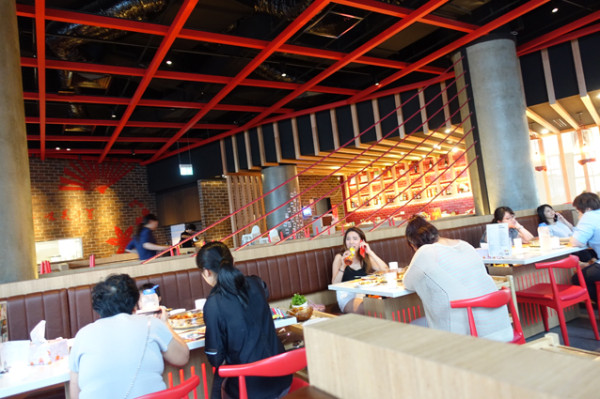 Tonight I’m eating at Simmer Huang, a Chinese mega-chain that boasts more than 500 restaurants worldwide. Their mainstay is the “simmer pot” - their own offshoot from the traditional Chinese hot pot. 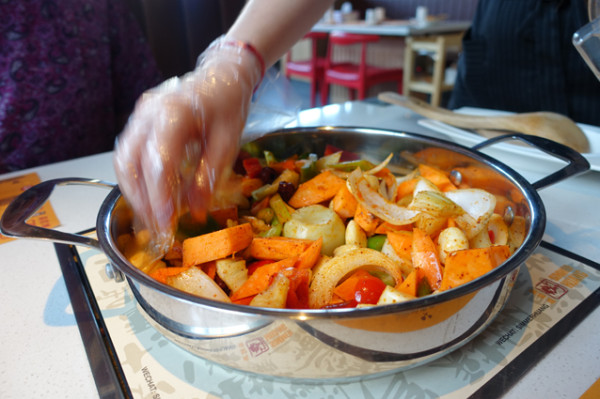 Simmer pots are cooked at your table by enthusiastic Simmer Huang staff. 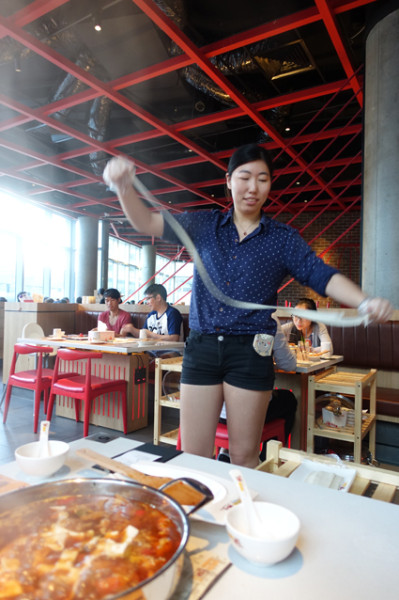 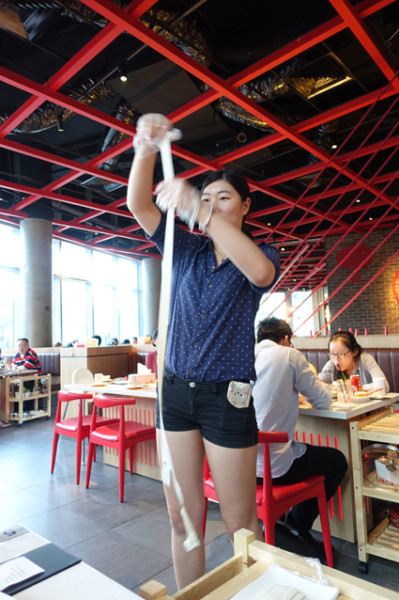 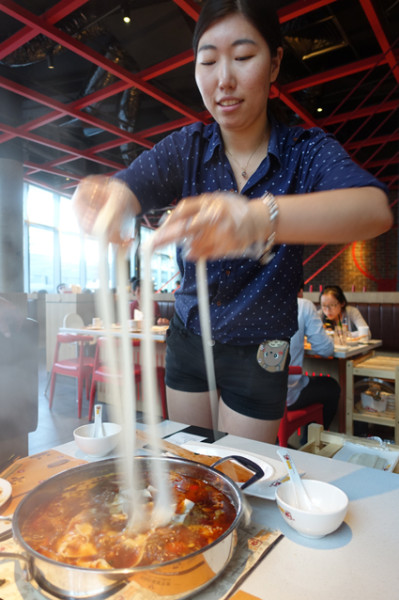 Even better: after you get bored with your main dish, staff return to your table to hand-stretch noodles. They throw them into your leftovers with broth, creating a second steaming course of soup. 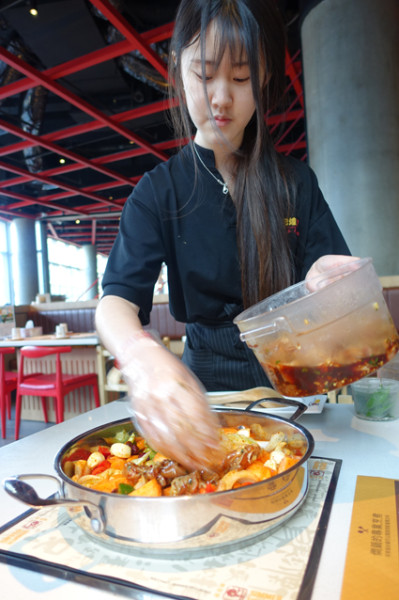 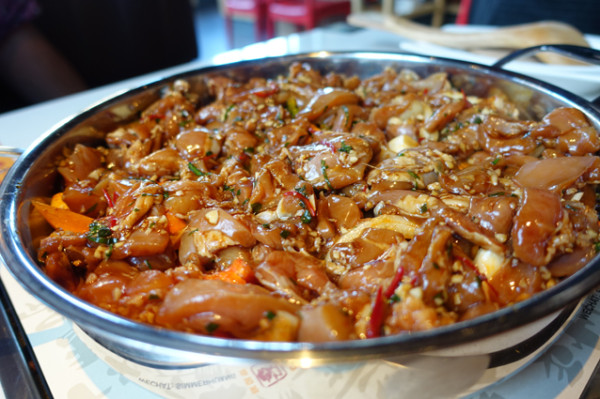 Touted as a “fourth generation” restaurant for the chain, this is the first Simmer Huang outlet to include a bar. The cocktail list may see you raise an eyebrow at ingredients like osmanthus, Chinese hawthorn sugar, peanut soup and jujube tea, but they’re surprisingly well handled across the inexpensive range of drinks. 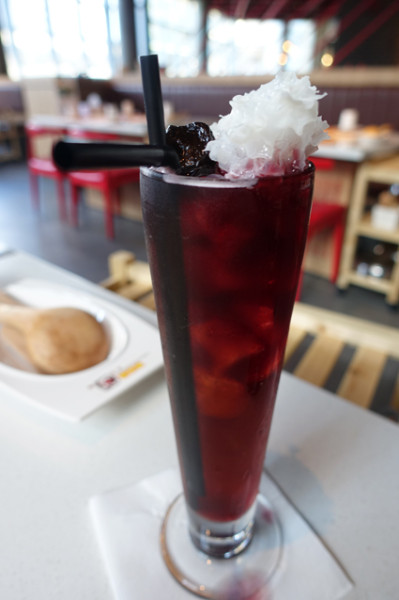 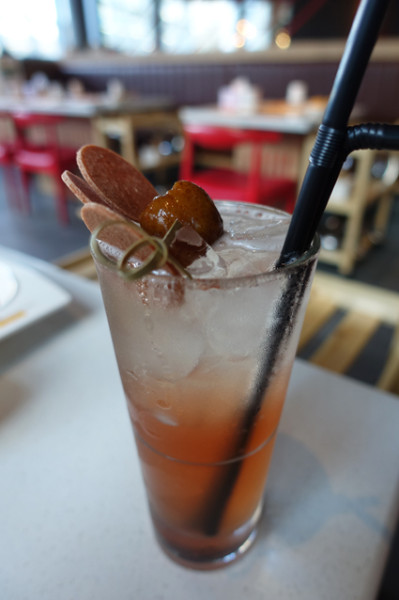 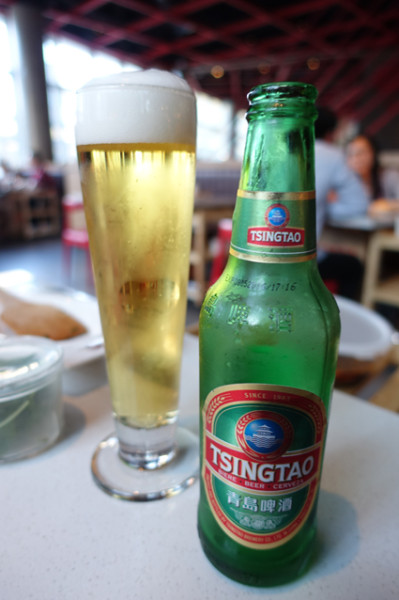 In Plum Blossom ($13), 12-year-old Glenlivet whisky is combined with Aperol, osmanthus, smoked plum juice, and lemon juice, then garnished with edible white fungus. It’s clever because it still allows the whisky to speak. Under The Hawthorn Tree ($13) takes the same whisky and teams it with Chinese hawthorn sugar, hibiscus tea, Crème de Mure and sea salt, then lengthens it with sparkling apple juice into a tall, balanced and refreshing drink - one I like even more.  However if they’re too weird for you, there’s always Tsingtao ($6.50) beer. 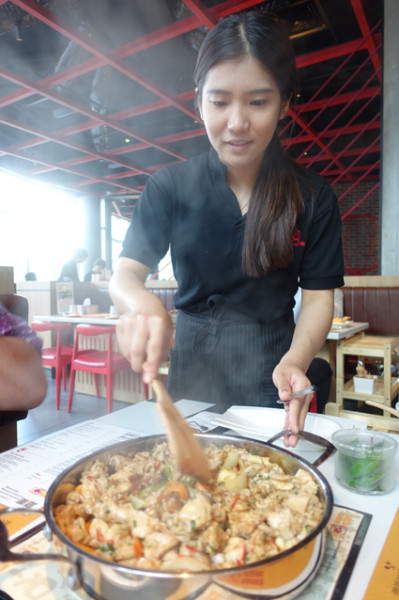 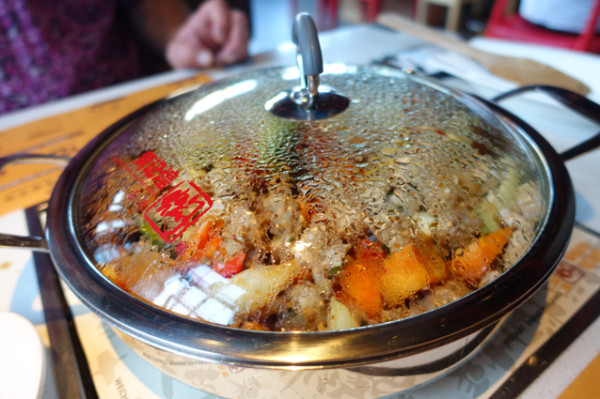 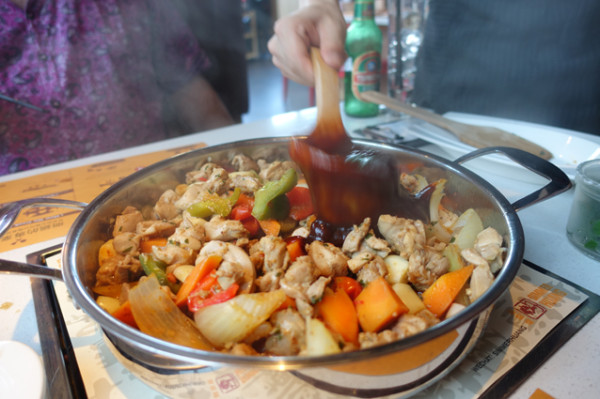 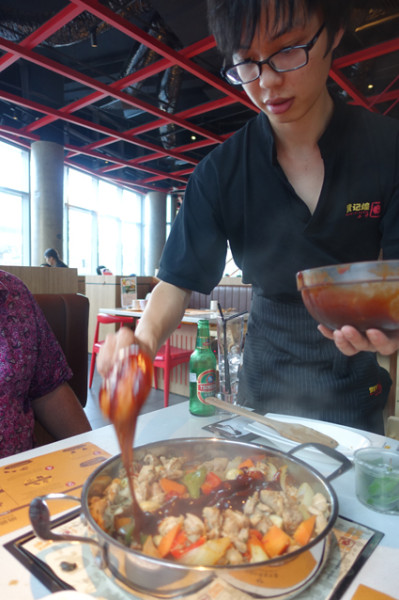 Available until March 7, this dish takes its inspiration from the Jiangxi province of Southern China, and is named for the three key ingredients - Shaoxing rice wine, sesame oil, and soy sauce. Billy's suggested three-cup sauce is used as a marinade for the chicken, which is then treated to Simmer Huang’s own secret saucing. 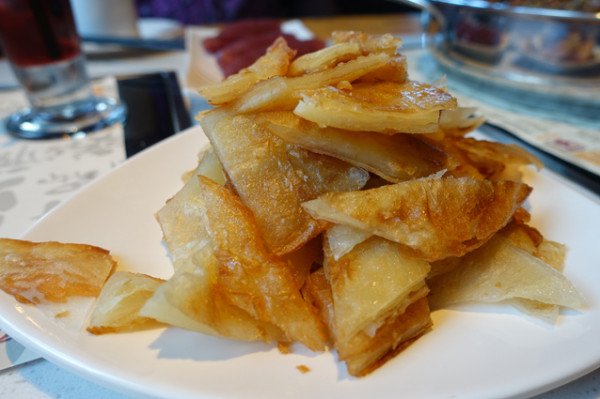 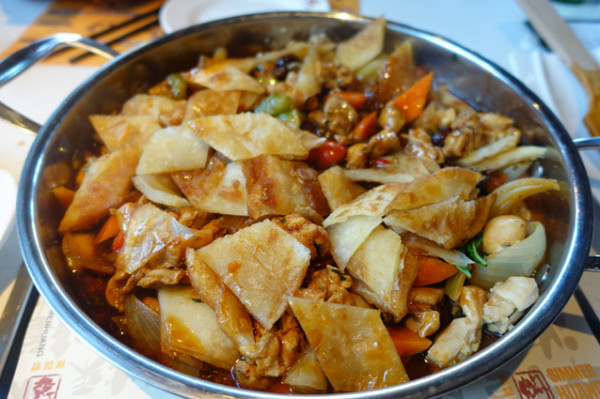 Extra ingredients like Pancakes ($6.90) are thrown into your pot by staff just before serving; and the dish’s heat level is left totally up to your discretion - just select ‘salty’ if you don’t like chilli. My dish was cooked ‘hot’ and had a reasonable kick. Keep your eyes peeled for jujubes (wolfberries) which were my favourite dish element. 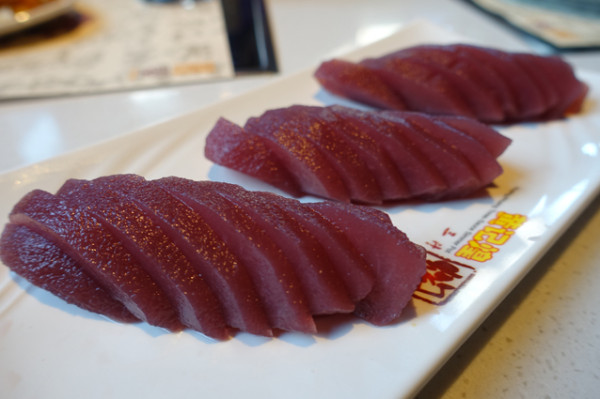 One simmer pot is a big meal for two people (it would better suit groups of four), however my endless quest for new things saw me start my meal with juicy Red Pears ($6.50) marinated in red wine, and... 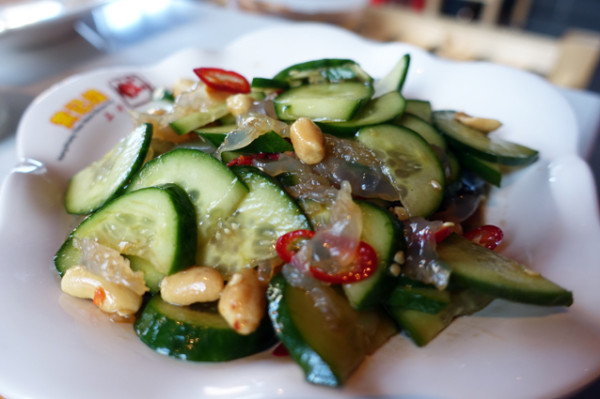 ...an even better Sour Bowl ($6.50) with jellyfish, peanut, cucumber and preserved eggs. They both help prepare your palate for your simmer pot. 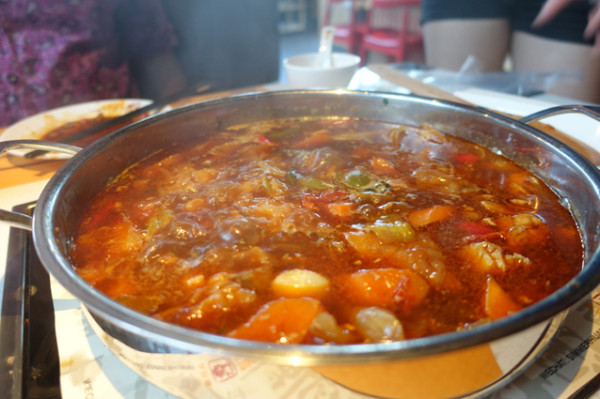 Handmade Noodles ($6.90) are stretched at the table, and added when your simmer pot is turned into a soup. At this point you can also throw in any manner of vegetables from Potato ($5.90) to Lotus Root ($5.90), though the dish would probably most benefit from something green, like lightly bitter Garland Chrysanthemum ($5.90) leaves. 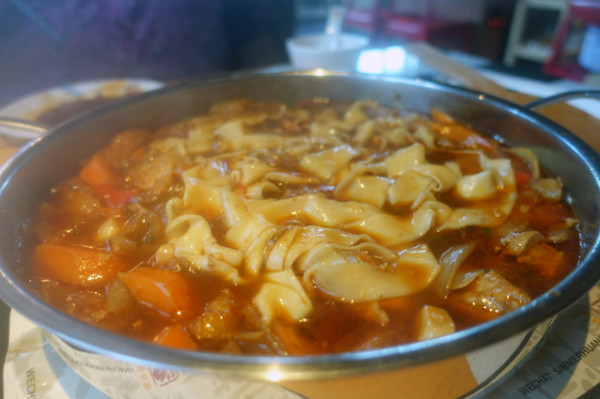 This is one-pot cooking kicked up to a whole new level, and definitely worth a look.