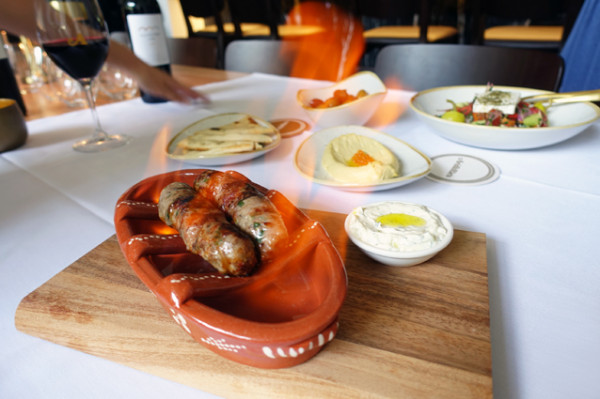 Continuing her journey as a Greek restaurateur, architect and interior designer, Maria O'Meagher (Aurora Design), has built upon the lessons of The Crazy Donkey in Dee Why, to open Aristotle’s in Neutral Bay. 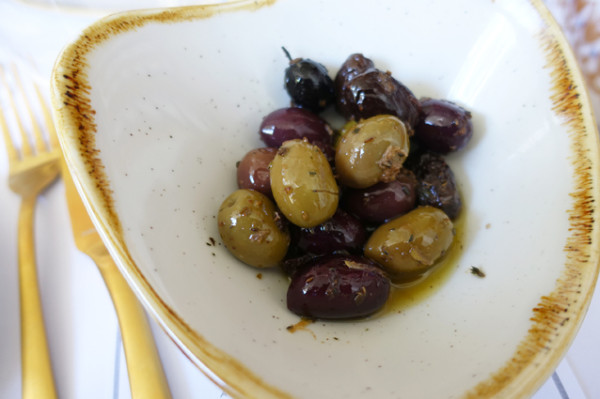 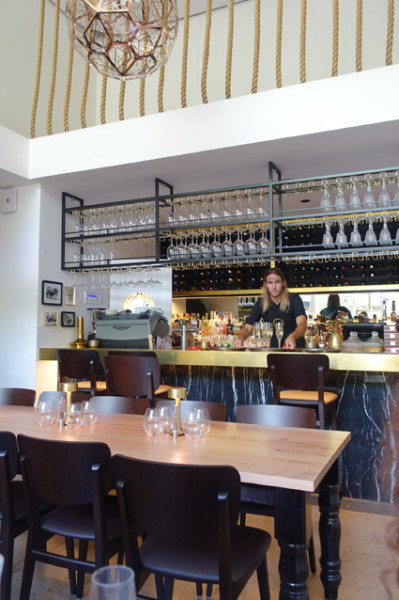 Summoning the yachting lifestyle of Aristotle and Jackie Onassis, this compact white space is given a luxurious nautical bent with gleaming gold portholes, a padded banquette, and rope rigging running across the room’s aerial space. Large dangling lampshades are a through line between O’Meagher’s two restaurants, though here in a maritime context, the round lights look like modern representations of antique glass fishing floats. 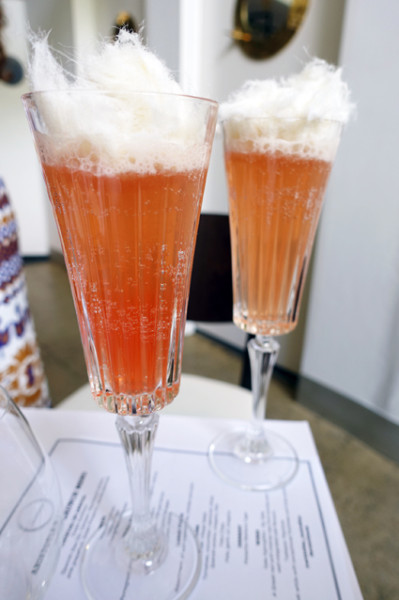 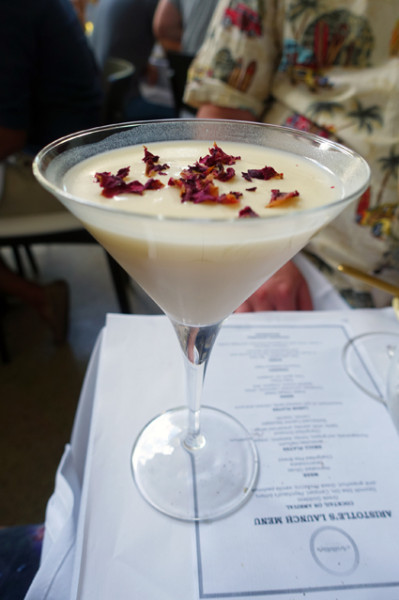 Beyond the stylish décor, the intriguing cocktail list is also largely O’Meagher’s creation. Spying a fluffy top of Persian fairy floss (pashmak) I was dubious about the Greek Goddess ($17) - sure she looked beguiling, but I was scared she’d be too sweet. Turns out she’s expertly balanced by a blend of Sipsmith Sloe Gin, Campari, Peychaud’s bitters and pink grapefruit, with sparkle added by Greek Prosecco. The First Lady ($18) also caught my attention by being the first cocktail containing Greek yoghurt I’ve seen in a decade of reviewing food and drink. By teaming it with Brockmans Premium Gin, lemon, almond and rosewater, O'Meagher has created an intensely floral but soothing drink that’s reminiscent of a Greek panna cotta. 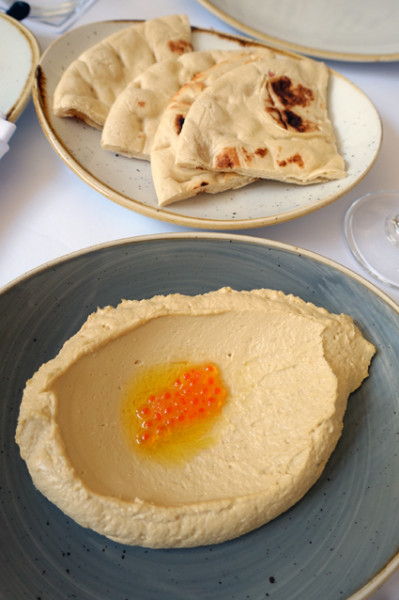 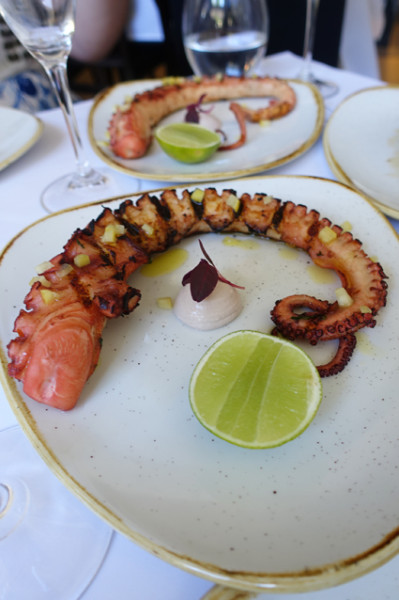 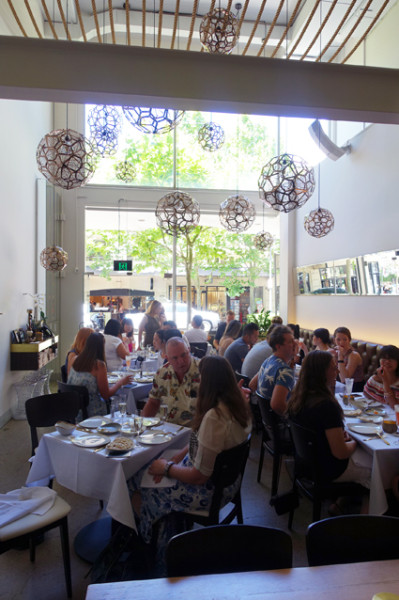 Load your table up with small share plates – they’re what this restaurant does best – starting with fluffy Taramosalata ($9). If you’re wondering why this version isn’t pink, it’s because here they don’t use any artificial colours in their tarama (salted and cured roe). An elegant curl of Char-grilled Octopus ($18) arrives simply adorned with preserved lemon, garlic, chilli and parsley and a cheek of lime, and is both tender and flavoursome. 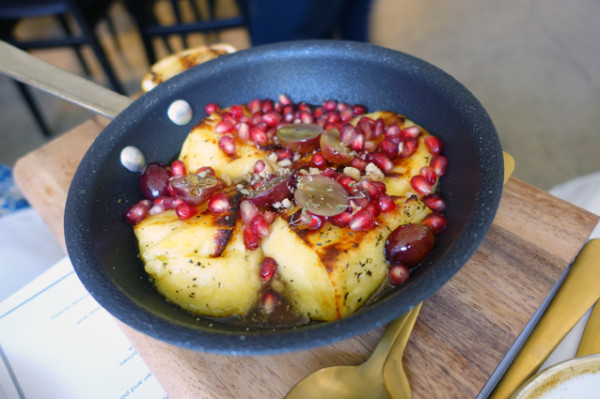 "I'm loving getting pretty coming to work each day," our smiling waiter Miguel volunteers as he pours me a glass of the 2014 Tselepos ‘Mantinia’ ($11) from the Greek Peloponnese. Miguel is wearing a crisp white shirt with grape cuffs; and the wine is a lively, lemony, dry white. They’re both perfectly suited to the cuisine. Miguel - who has been with Maria since The Crazy Donkey - is visibly puffed up with pride as he presents a skillet of Aristotle’s Haloumi ($16). 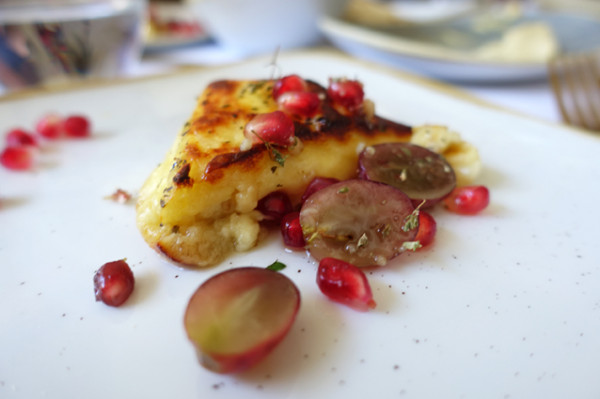 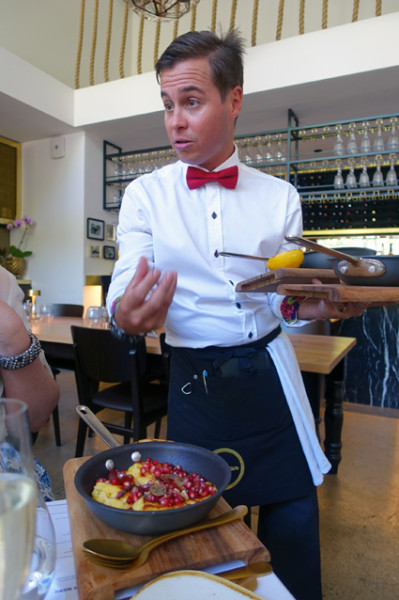 And proud he should be, topped with ruby red pomegranate, red grapes, oregano, walnuts and a drizzle of honey and balsamic, this puffed haloumi is the most successful version of this dish I’ve tried. Keeping the airy melted cheese warm inside the pan, and passing charred lemon separately (so each diner can balance their own dish), are both strokes of genius. 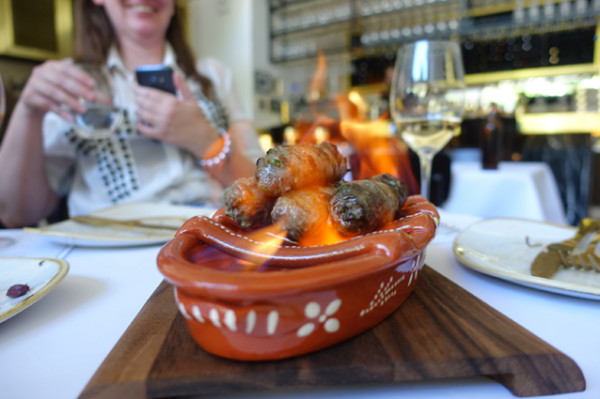 Head Chef Heydon Young’s (ex-Ecco) triumph however is a quartet of flaming sheftalia, or Barbequed Cypriot Sausages  ($18). These hand-cut lamb and pork sausages are wrapped in caul fat, and flamed so they’re charry on the outside and textural and pink within. 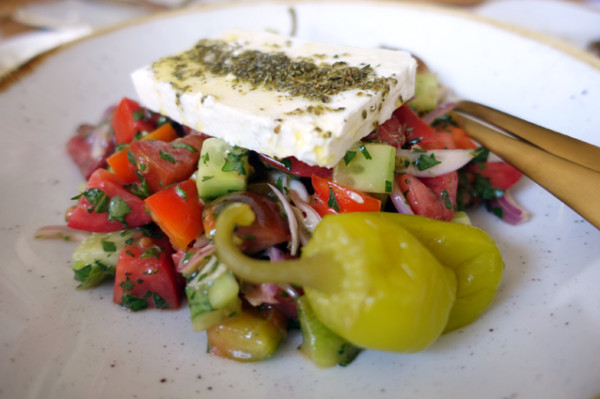 With a squeeze of lemon and a dab of tzatziki, their simplicity shines; making them well suited to being eaten with a well-dressed Greek Village Salad ($14). 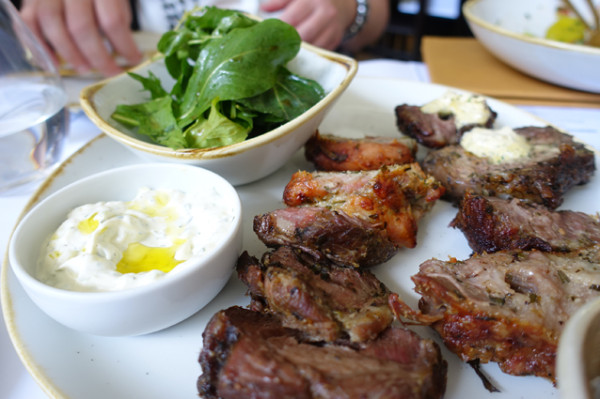 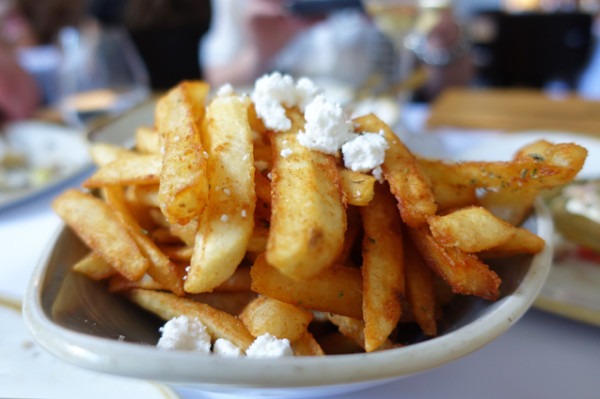 Rotisserie meats, running from single meat plates of lamb, pork, chicken ($28) or beef ($29) to a shared mixed meat platter for two ($60), are offered as large plates, but lack the nuance and excitement of the earlier dishes. I do however find myself reaching for more Feta Chips ($9). 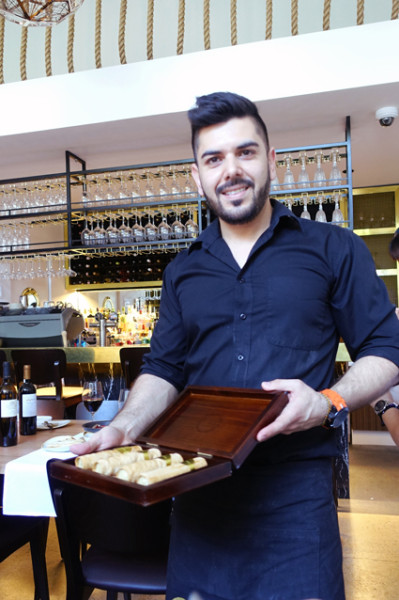 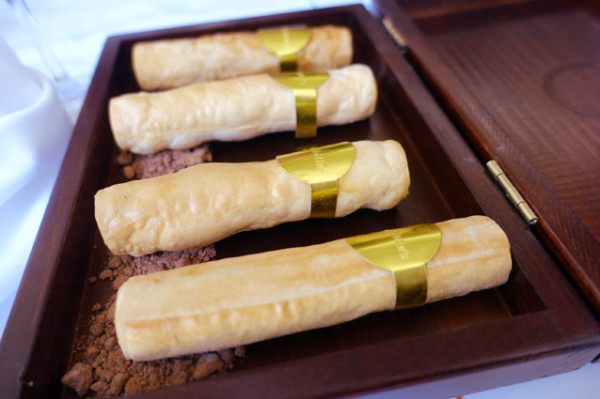 Friendly staff bearing cigar boxes of Pistachio Baklava Cigars ($9/each) will produce one more smile, as you dabble in the yachting lifestyle of the super rich.  If I had my way, we’d be sailing all the way to Tahiti…