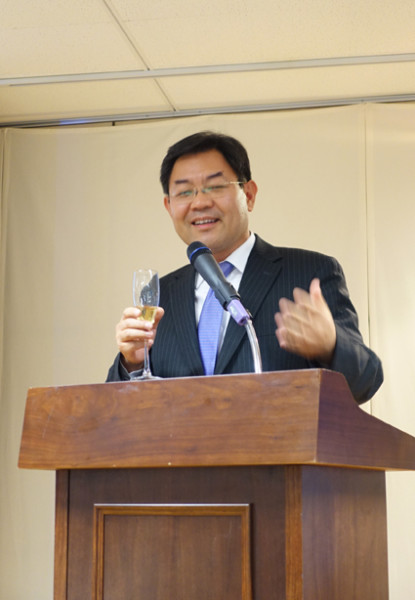 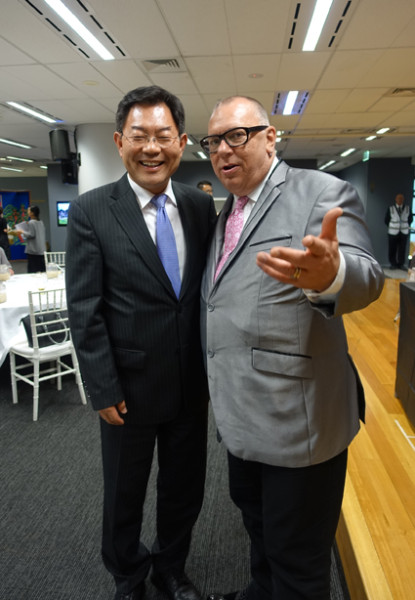 "The best way to learn about Korea, the country's culture, is through its food," Sangsoo Yoon, the Korean Consul-General explains, before adding, he "can't imagine Korean food without complementary beverages." We’re seated at his table at the 4th Korean Banquet Showcase, which is focused on Korean alcohol. Over the last course of the last three years, this event at the Korean Cultural Centre Australia, has rapidly become one of my favourite annual functions. The food – prepared by celebrated Korean chef and educator, Heather Jeong, is always a highlight; however my favourite part of the evening is participating in a cultural exchange with our Korean tablemates. 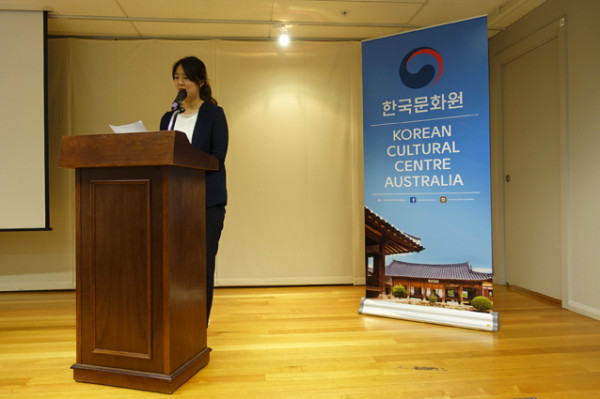 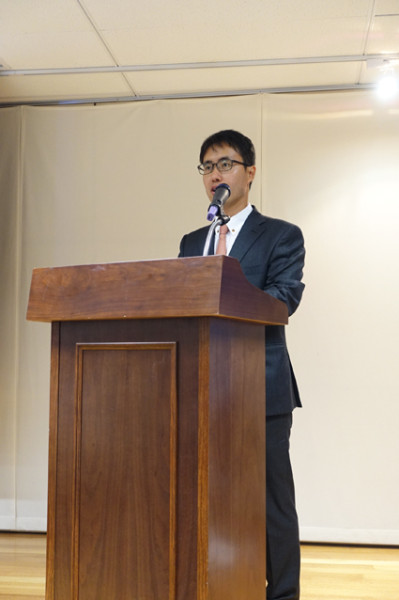 "Drinking with someone is considered one of the fastest ways to get closer together," explains Sin Young An, the head of the Korean Cultural Centre Australia. He introduces us to the term masineun chingu (마시는 친구) or drinking friends. 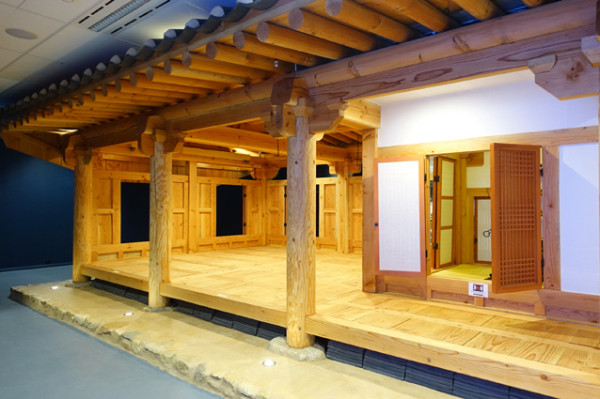 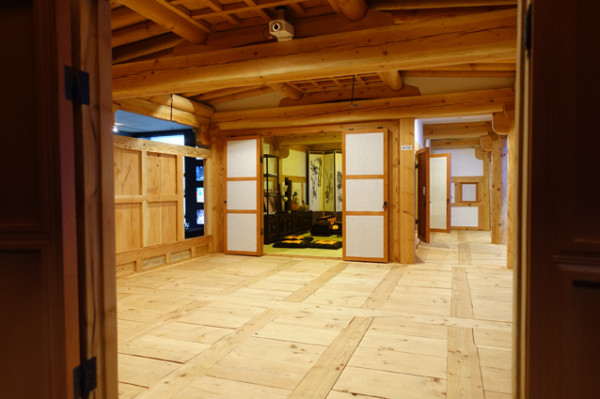 “Koreans are well known as hard drinkers around the world," he explains, and I instantly see parallels with Australian culture. However unlike Australians, Koreans are currently engaged in a return to heritage booze, which is both better tasting and healthier for you. To explain more about this, Sin Young An introduces us to Julia Mellor, an Australian who has lived in Seoul for nearly ten years, utilising her time there to become an expert in makgeolli. 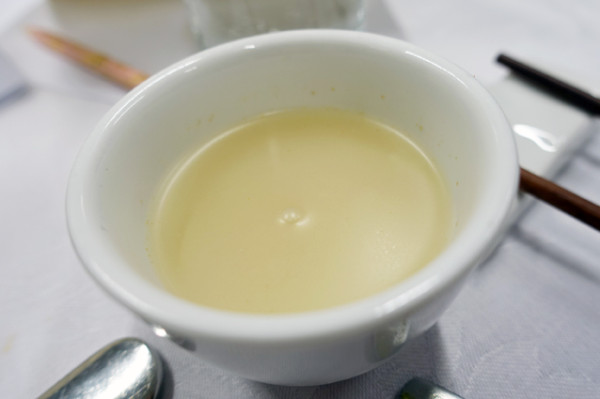 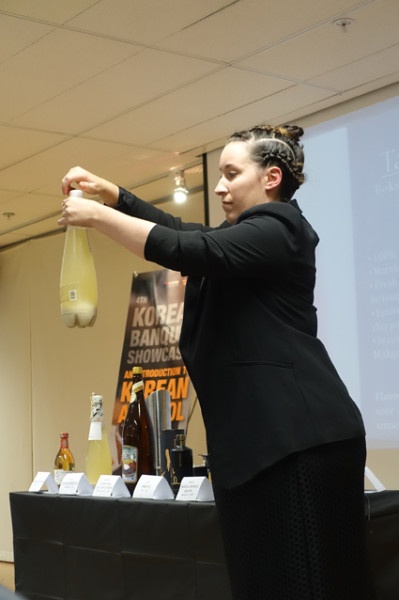 So what even is makgeolli, I can hear you ask? It’s a light, fizzy Korean home-brew, traditionally made from rice, water and nuruk. The latter is a fermented wheat cake that helps turn rice into sugars, and sugar into alcohol. This alcohol is very easy to make at home; as a matter of fact I currently have some fermenting away in my basement where it’s nice and cool (all thanks to the Korean Cultural Centre Australia). But I'm getting ahead of myself... 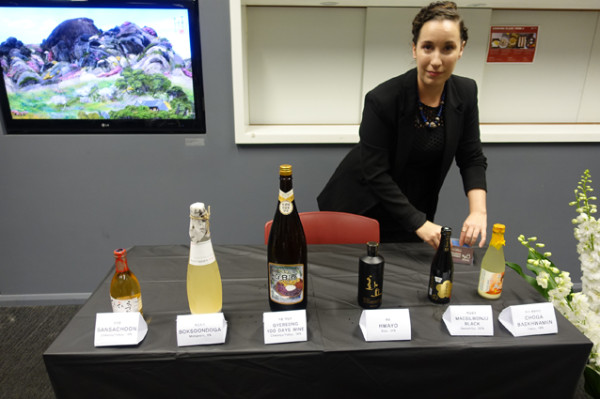 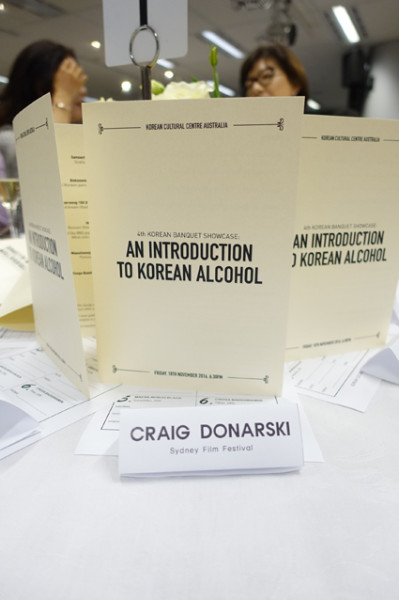 I’d tried both makgeolli and soju before attending this event, but I was unaware how closely these two alcohols were related. Along with takju and cheongju, which were both new to me, all four stem from the same basic fermentation process that I described above. 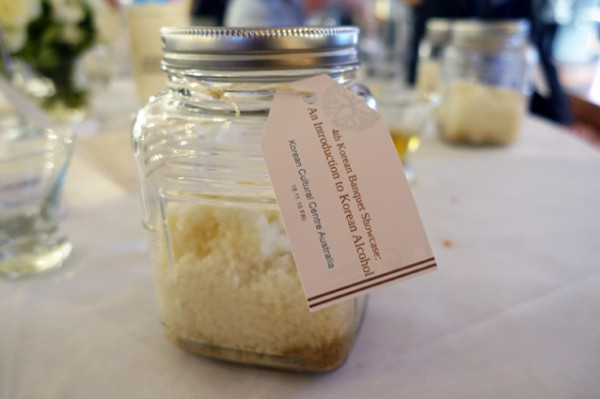 At the end of this fermentation, you get a three-layered product that is topped by a rice cake. Underneath the rice cake the top layer is called cheongju, while the bottom layer is called takju. 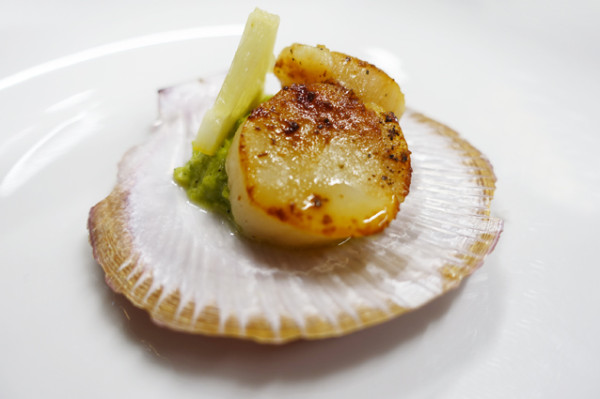 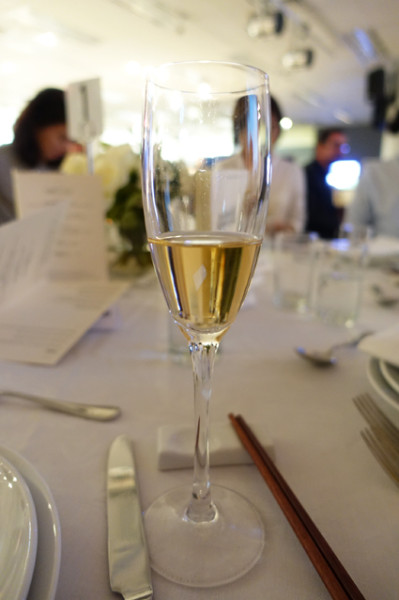 Against scallops with crushed peas, we started our drinking journey with Sanachoon (14%) which is the top layer of the ferment, and traditionally the drink of royals. It's clear and golden, reminding me of sherry. It's got a little bit of bitterness, but is not difficult to drink. 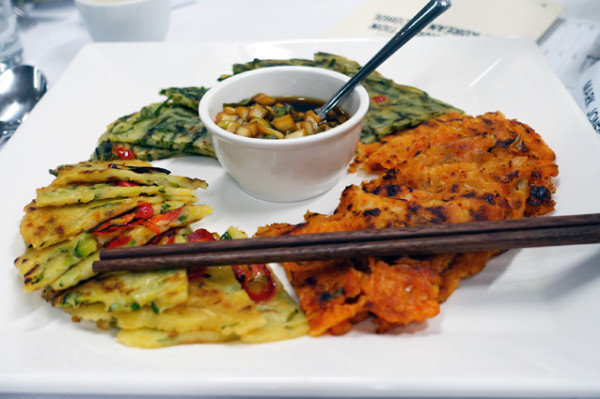 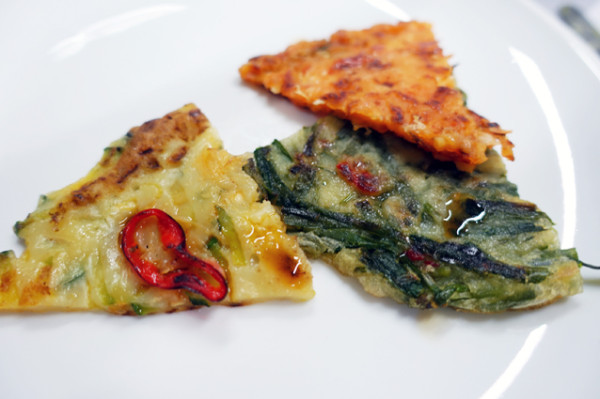 Tri-colour jeon (Korean pancakes) in mung bean, kimchi and garlic chives were accompanied by a cloudy cup of Boksoondoga (5%). It's easily my favourite drink of the night, and is much more subtle and complex (stemming from it being unpasturised) and thus unlike any of the makgeolli I've tried in Australia before. 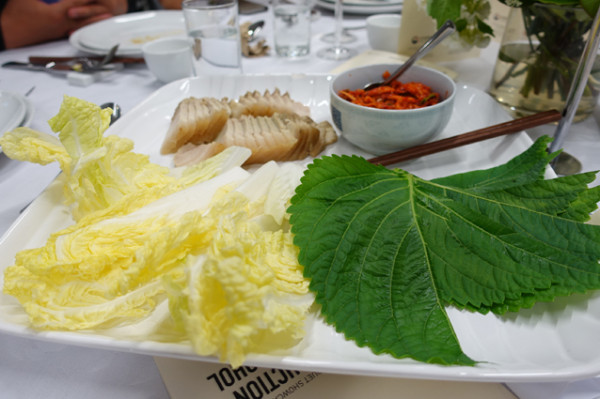 Distilling cheonju results in soju, which is (of course) a more concentrated alcohol. The Hwayo (41%) we try with these bossam (steamed pork with chilli radish and kimchi wrapped in bright green sesame leaves) is a premium soju, and much softer than all of the ones I've tried before. 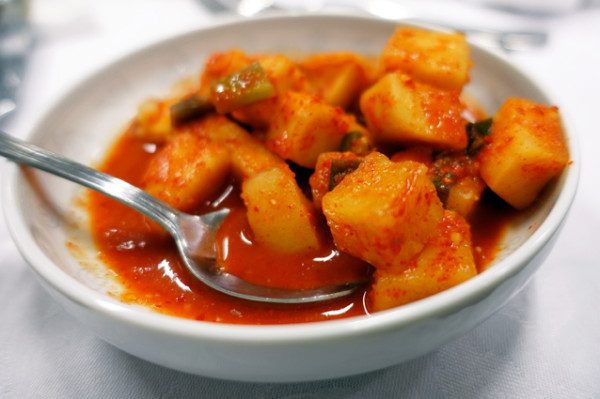 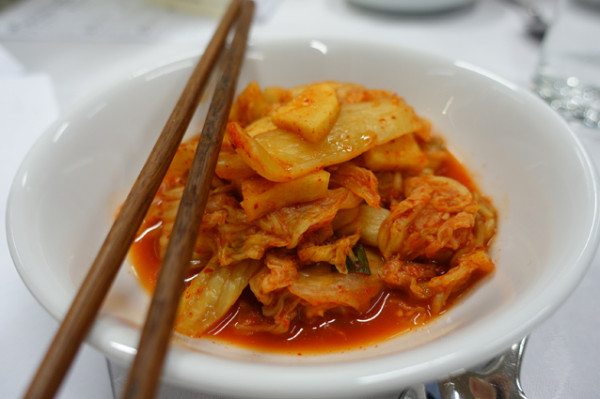 If you've never tried soju before, it's probably closest to drinking vodka. This particular version is crisp and pure, with a tiny bit of honeydew melon; it's also lovely and round, caressing your whole mouth as you drink it. 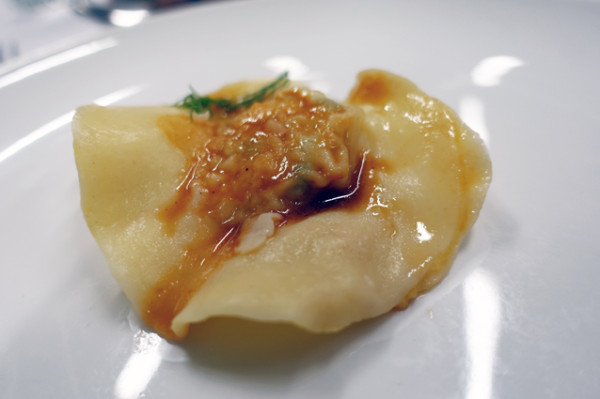 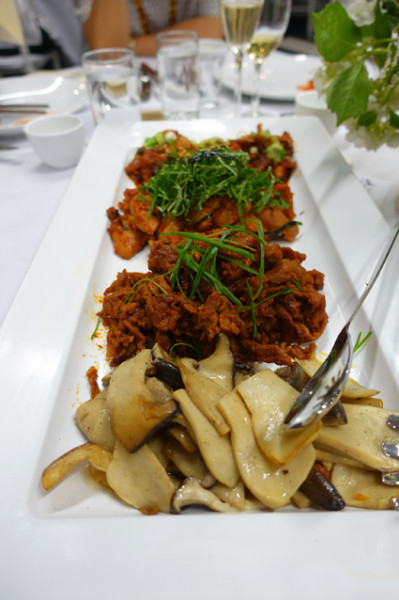 The next few courses pass as a blur as we listen to the story of how Korean alcohol has changed over the course of Korea’s history. Over a plump raviolo stuffed with prawn and bream in a creamy rice wine reduction served with the Gyereong 100 Days Wine (16%) (another kind of cheongju) we hear that Korean’s interest in home-brewing began in the Joseon Dynasty (1392-1910) when they made commercial brewing without royal consent illegal.

As we tucked into a shared platter of Korean barbeque with chilli pork, chicken and octopus, we hear that during the Japanese occupation of Korea (1910-1945), the recipe moved away from traditional ingredients like nuruk. In this period they used koji (sake yeast) to start fermentation, and the flavours changed to suit the Japanese palate. 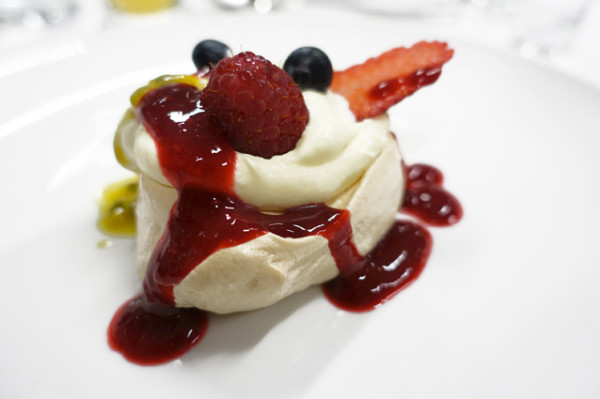 As we begin to wrap up our evening of cultural exchange, we’re served a pavlova and Maesilwonju Black (20%) a gwashilju, or fruit-based wine made with golden umeshu (Japanese plums). We’re regaled with a story of the post-Korean War (1965) rice shortage, when brewing with rice was banned. Necessity breeds innovation, and with the arrival of the American forces, this meant brewing with wheat flour, sweet potato and corn. The lack of cold storage meant these ingredients needed sweeteners to make them palatable, and sugar was out because the brews would continue to ferment, so entered stevia and aspartame (NutraSweet). These (awful) ingredients are still used in many Korean alcohols today, even though they’re no longer needed. However change is in the air, and there’s currently a movement advocating for a return to craft, tradition and better ingredients. After trying an unpasturised and beautiful makgeolli, I can only hope this wave of traditional Korean brewing carries all the way to our sunny shores.