With so many inner city food truck events being a victim of their own success, what with long queues and food running out before all visitors are sated, I headed out to Park Feast with a little trepidation. This two-day food truck jam is in its second year, with their first event last year attracting over 70,000 visitors. 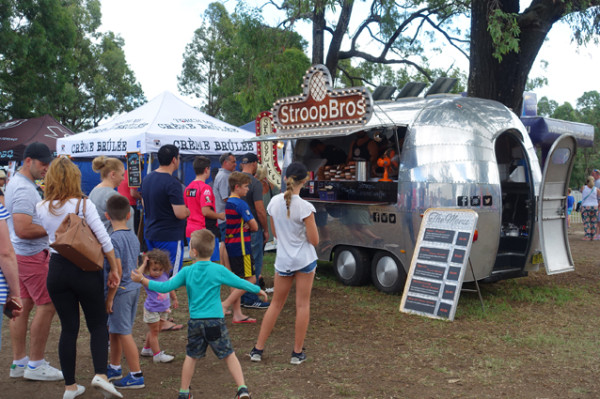 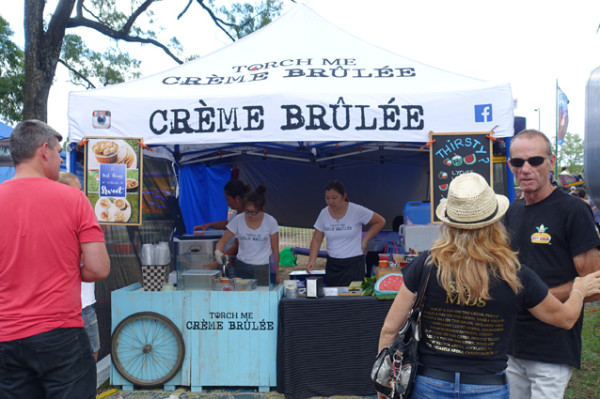 Luckily it’s set on the grounds of Bella Vista Farm, which located in The Hills District – a council area renowned for having a bit of space. With the event’s parking team working like a well-oiled machine, we wasted no time between entering the grounds and getting amongst the ring of more than thirty food trucks. The other key difference between Park Feast and inner city food truck events is that Park Feast was completely alcohol free. While barbeque and craft beer do go together like butter and bread, this did help to make the event more attractive to family groups, with the kids also taken care of with the addition of amusement rides. 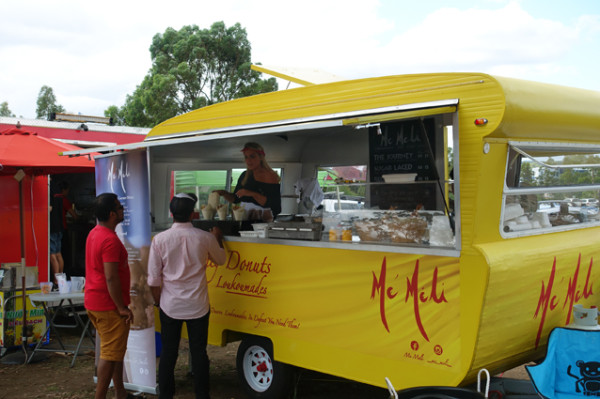 Having recently visited the Aussie NightMarkets set-up in neighbouring Blacktown, I was expecting to see a really culturally diverse group of food trucks. What I found in Bella Vista however was dominated by barbeque and burgers. 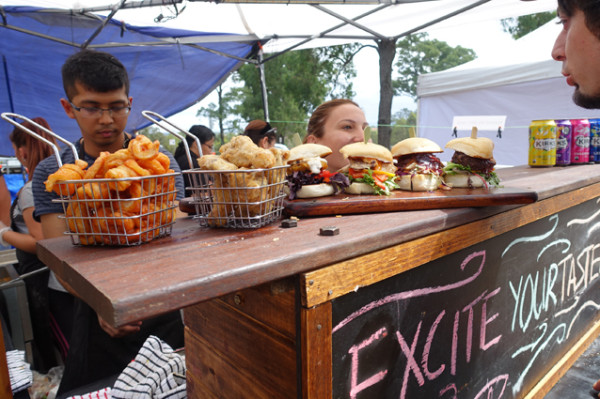 Nearly every truck offered up at least one item that was deep-fried, from Greek loukoumades (doughnuts) to crumbed slabs of lasagne, to at fifty kinds of fries. 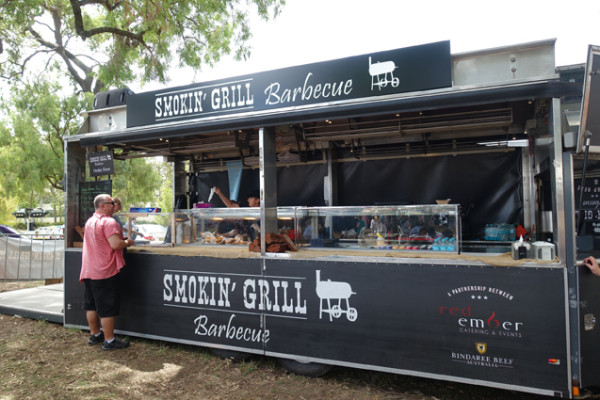 We started our progressive lunch at Smokin' Grill Barbecue, marvelling at their super-long smoker. The stall is a partnership between a caterer – Red Ember – and one of Australia’s largest meat processors - Bindaree Beef - whose operation is based in Inverell. 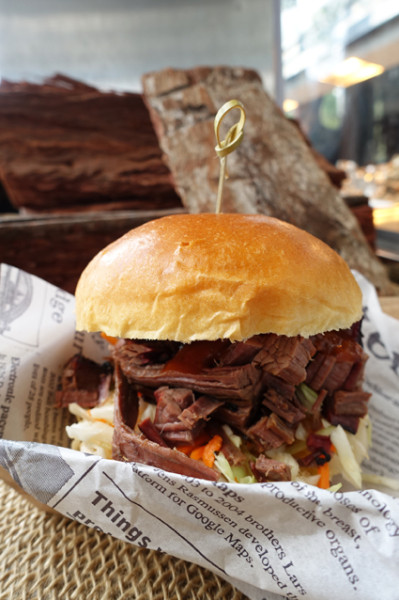 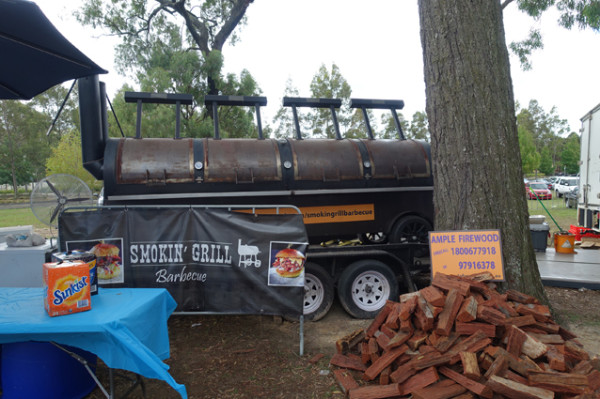 We tried an Angus Brisket Roll ($13) that teamed a generous amount of barbequed Angus brisket with fresh, crunchy ‘slaw and a nicely balanced homemade barbeque sauce, and stuffed it all between two soft buns. 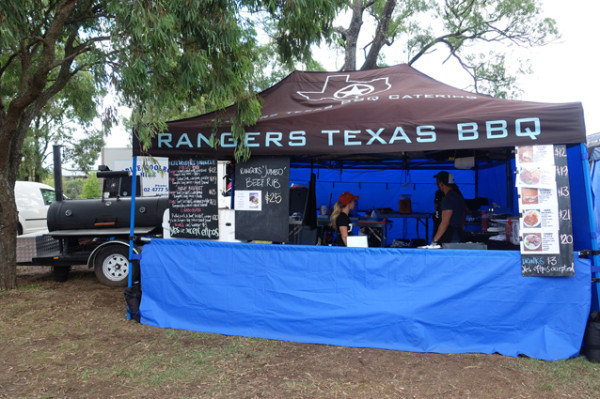 At the other side of the ring, the aroma of more barbeque lured us to their opposition – Rangers Texas BBQ – who were operating not one, but two smokers. While their barbeque plates were a little more expensive, the BBQ Beef Rib ($25) we had with a five buck pulled pork add-on, was a work of art. 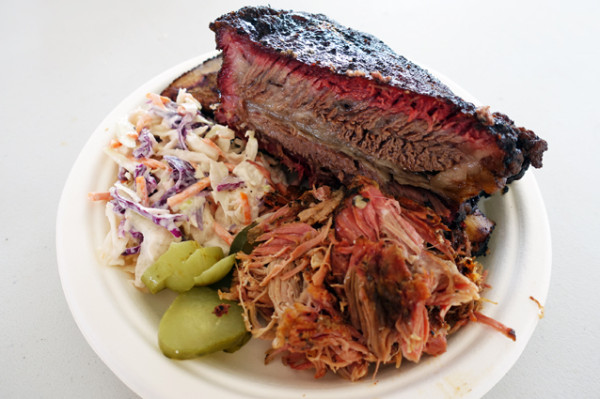 With nice thick bark, and good penetration from the marinade, they managed to keep this tender hunk of Riverine beef quite moist and juicy. While it looks small on the plate, once we’d both had our fill, there was still plenty of short rib to spare, which they wrapped up for us in foil to take away (it’d be a crime to waste beef this well cooked). It was served with a slice of white bread, crisp 'slaw and some palate-cleansing pickles. 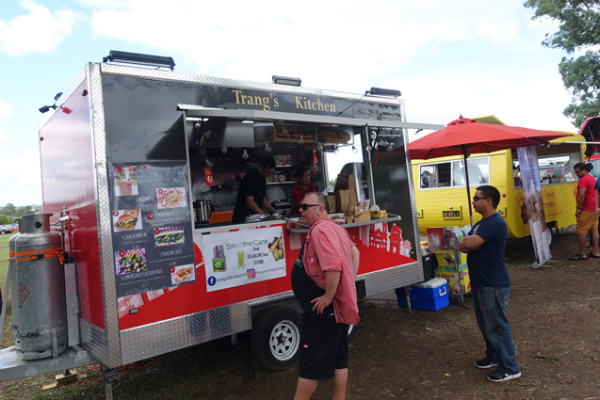 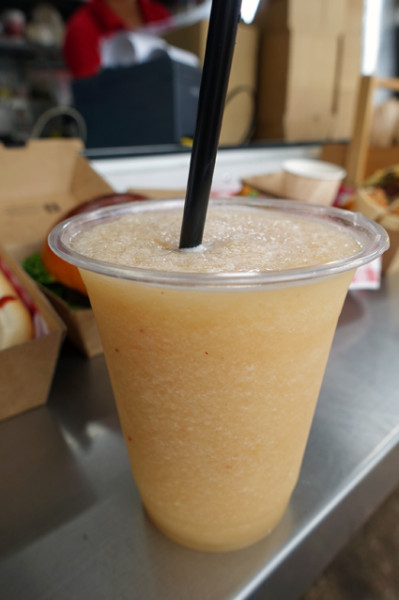 We punctuated our barbeque with a Sugarcane Slushy ($4) from Trang’s Kitchen. This Vietnamese food truck was one of the few trucks offering up a healthier looking dish like pho along with the requisite burgers and loaded fries. 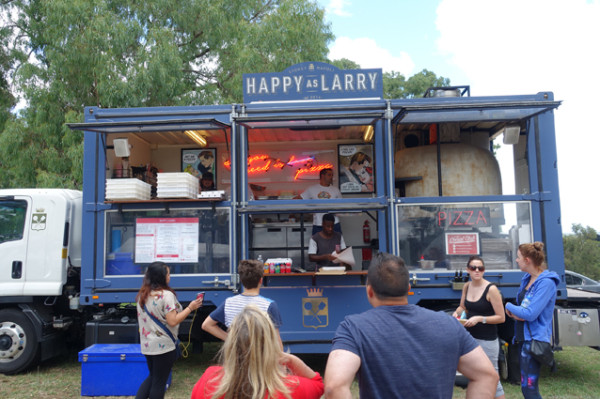 Taking a break from eating, we took a wander around the rest of the food truck circuit. Our attention was captured by Happy as Larry, who have somehow managed to transport a domed pizza oven on the back of their truck. This glass box mobile Italian pizza kitchen boasts its own neon (should look great at night), and was turning out credible looking pizzas with simple Italian toppings. 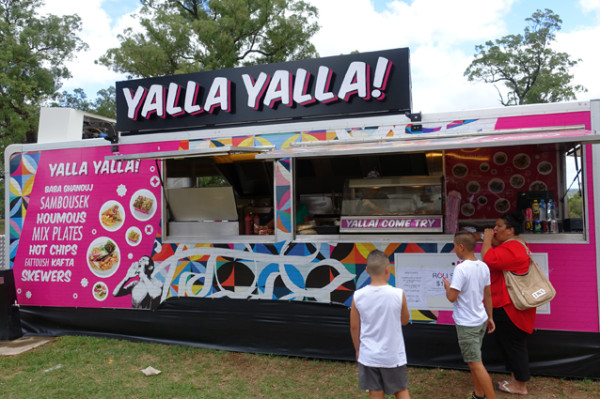 Yalla Yalla - a bright pink Lebanese food truck that is owned by creator of the Thainabox chain – offered up a range of popular Lebanese dishes, from baba ghanouj to houmous, to mixed plates and sambousek, along with the now-expected hot chips... 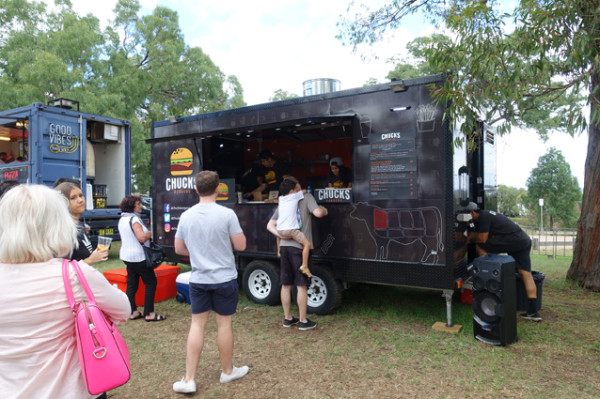 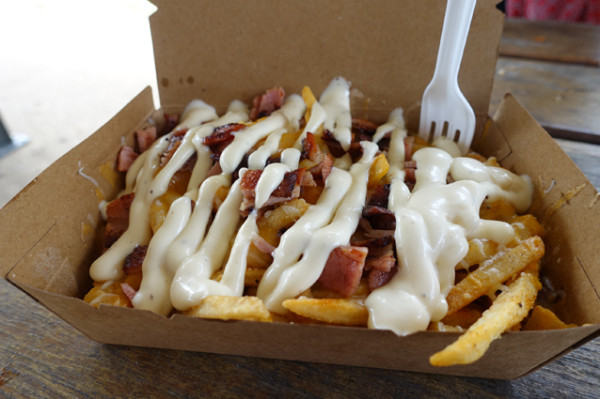 We finally succumbed to the lure of fries at Chucks Burgers. With one of the longest queues we saw all day, they were offering up burgers oozing with cheese, and loaded fries. We opted for Truffle Fries ($8) teaming crisp French fries with their famous four-cheese blend, smoky bacon and lashings of truffle aioli. 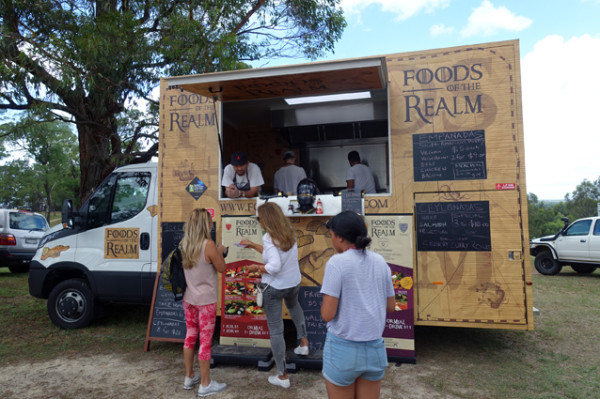 Rapidly hitting greasy-food saturation, we ended our Park Feast adventure at Foods of the Realm. They’re influenced by the food of Sri Lanka and Argentina, and are making oven-baked Empanadas ($5/each). Encased in wonderfully short pastry, and available in a variety of flavours, from beef to a fully vegan empanada, these proved to be a nice, grease-free food option.