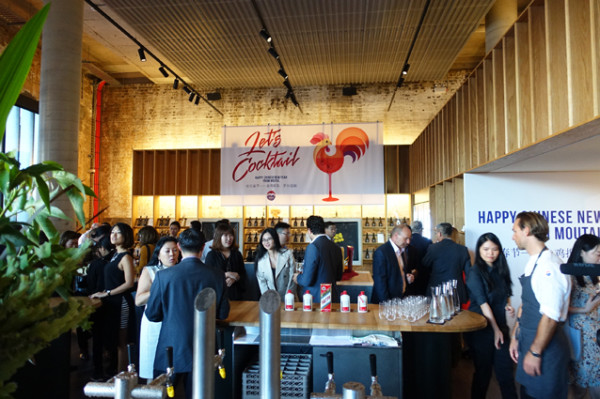 China’s luxury spirit, Moutai, can be polarising for some Western drinkers. We tend to head into white spirits thinking they’ll all be like vodka, and assume a good one tastes clean and crisp, and a bad one sets your throat on fire. Moutai is anything but vodka-like - the funky, fruit esters produced by fermenting sorghum are desirable characteristics. 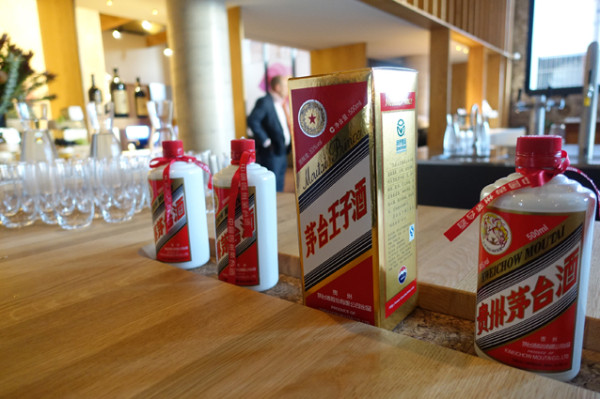 When you bring Kweichow Moutai to your lips it smells a bit like nail polish remover (acetone), and it tastes like kerosene, giving way to esters that throw pear and banana, and a bit of soy sauce. I have a feeling that if I could get over these initial hard-to-like palate blasts, what I’d find would be as layered and nuanced as fine whiskey. So my attendance at the Moutai CNY Celebration held at the Handpicked Wines Cellar Door in Kensington Street, Chippendale, was all about trying to get a better handle on Moutai. 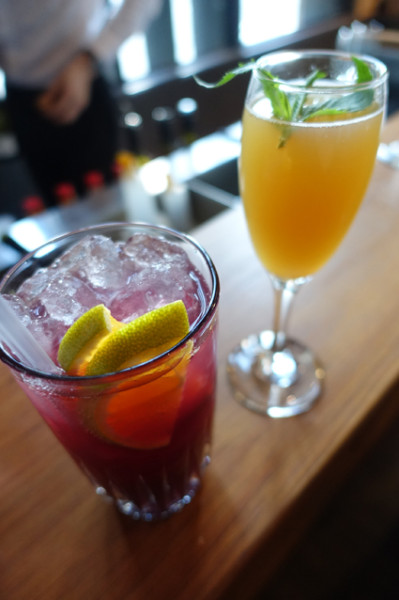 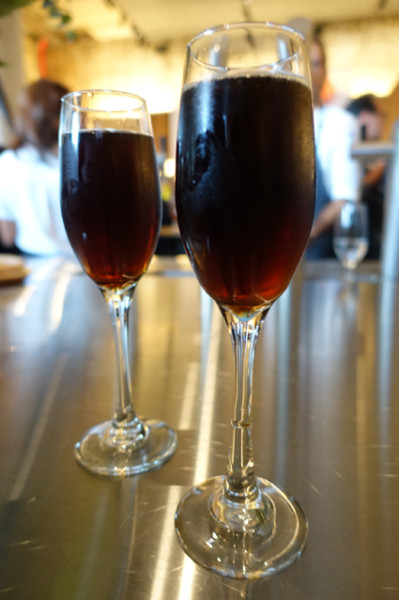 The event, attended by celebrity guests including Lee Lin Chin, offered up four different cocktails. With such a complex flavour profile to begin with, making a Moutai cocktail wasn’t going to be easy. Doubting my ability to drink four Moutai cocktails, because this spirit is like a fast train from sobriety, we shared the first two. The Roosters Neck took Moutai somewhere long and fruity with pomegranate, lime, orange, red wine and chilled soda. While the spirit was gentled, I found the overall flavour hard to enjoy. The Sneaky Beak built upon a Moutai Mimosa, starting with fluffy orange and sparkling wine, then throwing in burnt orange, vanilla and mint to further tame the bold spirit. The end result was robust but quite enjoyable. Next we moved on to the Black Crow. This Champagne flute of Moutai, stout, agave, sparkling wine and sesame just wasn’t my thing at all – but I’m also not a stout drinker, so perhaps the beer was the problem. 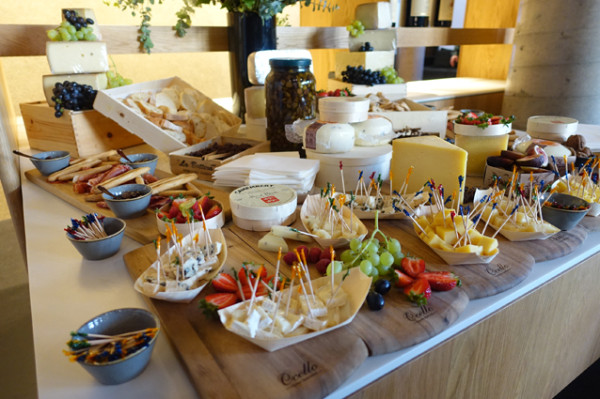 Cleansing my palate with a dabble in the extensive cheese selection from the store's Fromaggi Ocello connection, I was ready for my final Moutai expression. 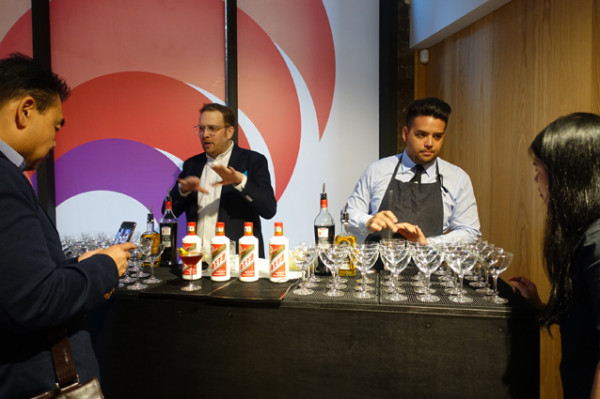 Bobby Carey (Earl’s Juke Joint), winner of the inaugural Enter the Dragon Moutai cocktail mixing competition was in the VIP bar, mixing up a storm. His cocktail, Banana Dynasty, was far and away the best cocktail we drank all evening. 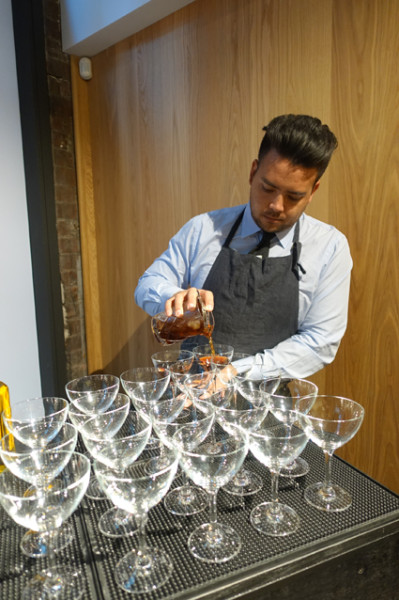 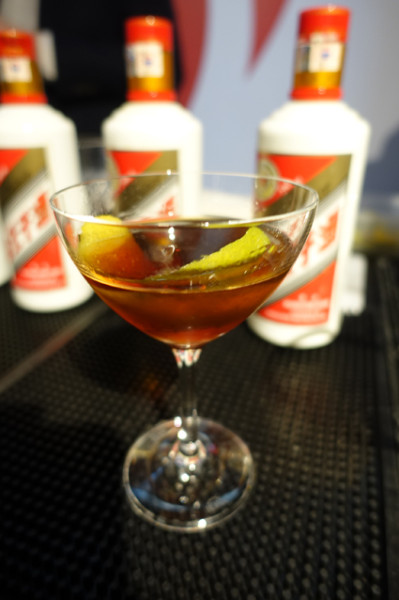 Playing with (rather than trying to disguise) the banana-like esters in the Moutai, Carey teamed it with Gifford crème de bananes, then added La Quintinye Rouge vermouth and a dash of Angostura bitters. The resulting cocktail, served with an orange peel garnish, would be easily palatable to any Negroni drinker. 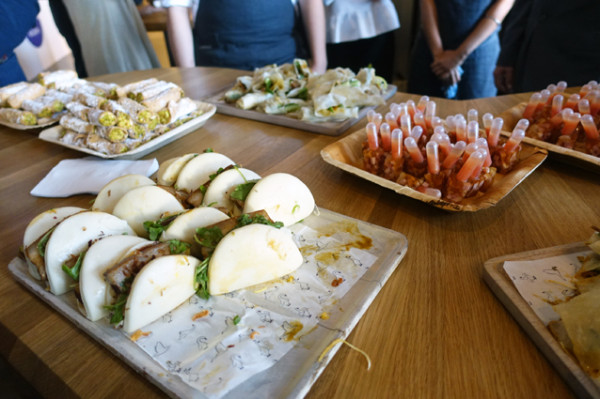 To keep us from falling over, we ate canapés from Kensignton Street neighbour, Holy Duck. 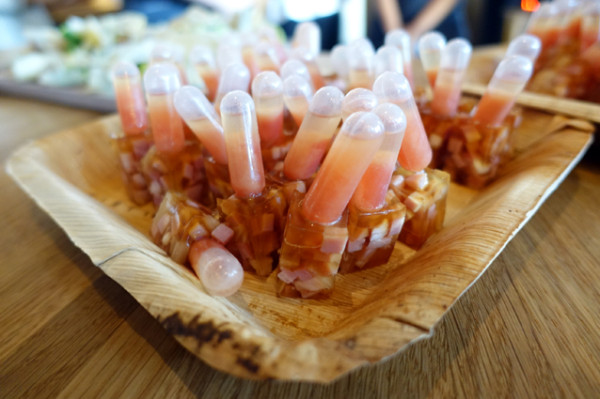 Beyond soft pork belly-filled bao, they made a clever Moutai-infused canapé where a little vial of Moutai Bloody Mary mix was injected into a cube of pickled vegetables in jelly. This was easily my bite of the night.


NOTE: You can see a review of this venue back HERE.