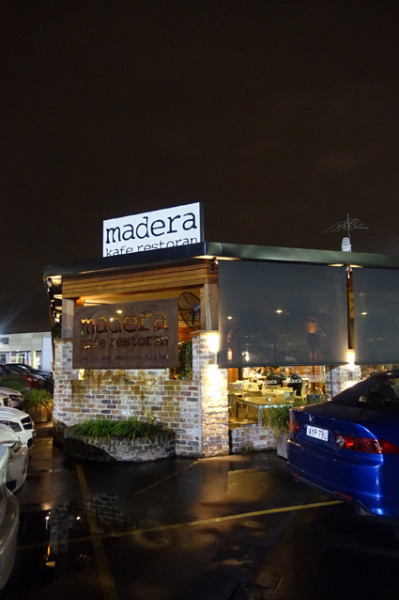 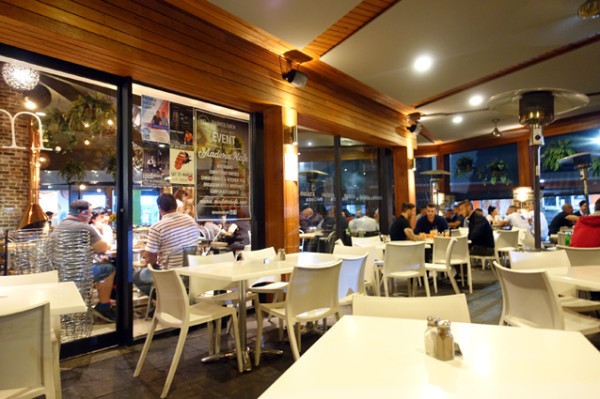 In arguably one of the oddest locations I’ve dined in Sydney, Madera Kafe Restoran sits in the centre of the car park of a drive-in homewares centre. This curious octagonal restaurant boasts a large covered verandah area that’s half full on a second sitting, even on a miserably rainy weeknight. The crowd is mostly Serbian and Macedonian, according to the friendly blonde ladies on the next table, and they come here for dishes stemming from across the Balkan region. 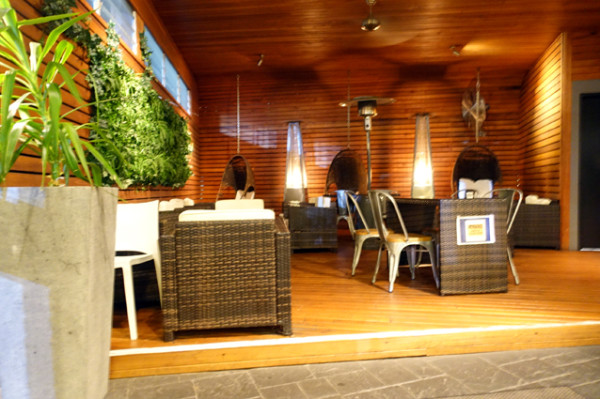 It’s actually Serbian-run, with owner and second-generation restaurateur, Petar Tasic, building upon the success of his father, who owned the first Madera in neighbouring Canley Heights.Tasic is handsome and muscular – much like the restaurant’s clientele - who all seem to be sporting uniform haircuts that are slightly longer on top with super-short back and sides. 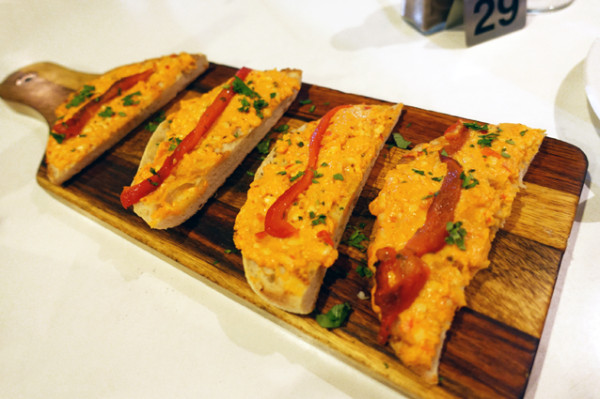 While Serbian cuisine is varied, with influences from Turkey, Western Europe and its Balkan neighbours, meats, alcohol, dairy and bread are mainstays. Wood-fired bread is a pillar of Serbian cuisine, so we start with Urnebes Bread ($11.50). Made on a traditional flatbread called lepinja, which looks a bit like a pita pocket, this dish presents four pieces of bread topped with a blend of cheese, paprika, chilli and wood-fire roasted capsicum. They’re tasty but unusual – the closest non-Serbian analogy I could come up with was Welsh rarebit. 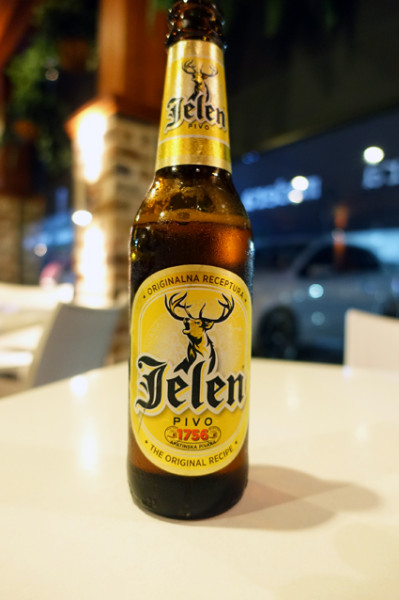 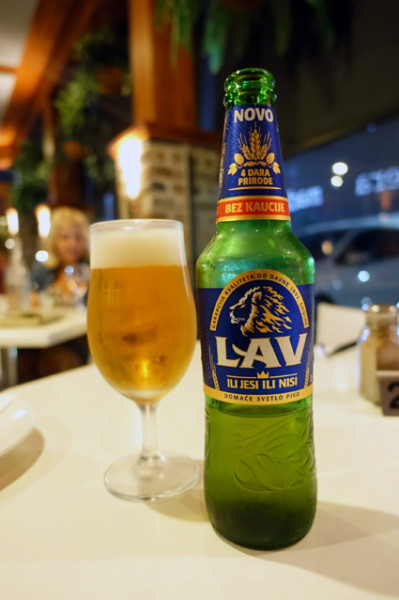 With alcohol being another Serbian pillar we obviously need some. Passing over the throat-burning fruit brandies – rakija – because we’re driving back to the city later, we settle for a pair of Serbian beers. Pale lager dominates in Serbia, so we give it a whirl in Jelen Pivo ($8) and a light pilsner called Lav Pivo ($8). The former is malty, semi-sweet and a little metallic, while the latter has a bready aroma with malt and hops more in balance. 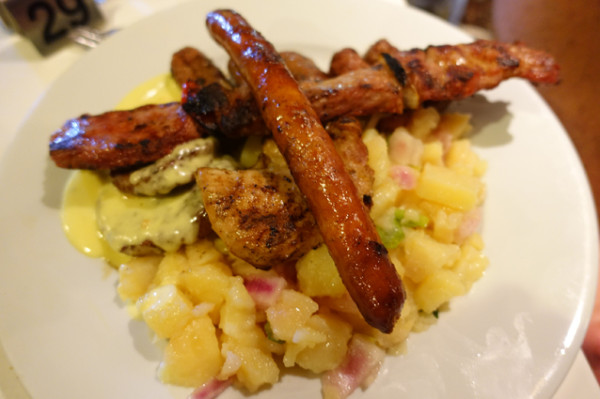 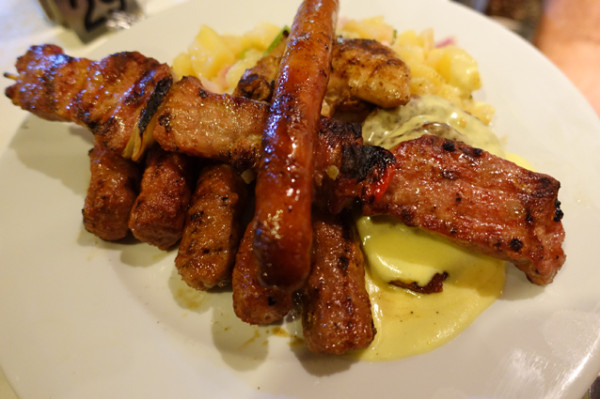 They’re both perfect to wash down your third mainstay of Serbian cuisine – meat. Grilling is popular in Serbia, and Madera’s Mixed Grill ($31) seems a good way to explore this. Your 600grams of grilled meats include beautiful ćevapi (skinless sausages); smoked Serbian sausages; char-grilled chicken thighs marinated in a Serbian spice blend; pork neck skewers called ražnjići; and a tasty round of char-grilled minced-steak called pljeskavica. It all sits on a tangy potato salad called krompir salata (you really need the vinegar to cut against the richness of the meat). There’s also a drizzle of creamy, golden kajmak – a lightly cheesy soured cream dip – that helps you get in the final mainstay of Serbian food: dairy. 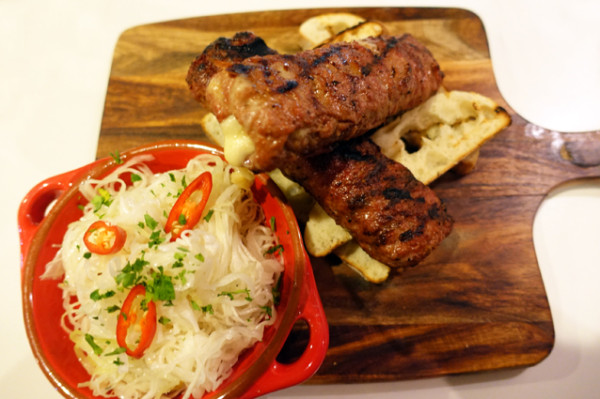 Kupus salata (cabbage salad) is another perfectly palate cleanser - sharply tart and crunchy. You can order it as a side, or it comes with the Leskovacki Cevap ($28.90). This slightly lewd pair of char-grilled mince patty logs are stuffed with smoked speck and oozing cheese. They arrive with toasted slices of lepinja bread.

It’s another hearty serve, but if you can’t finish your meal, amicable staff are very happy to package up your leftovers. (From their enthusiasm to do so, I get the impression this happens quite regularly.) With the meat sweats breaking out on my dining companion’s brow, we left without trying any of the desserts I’d coveted on their well-curated Facebook page.