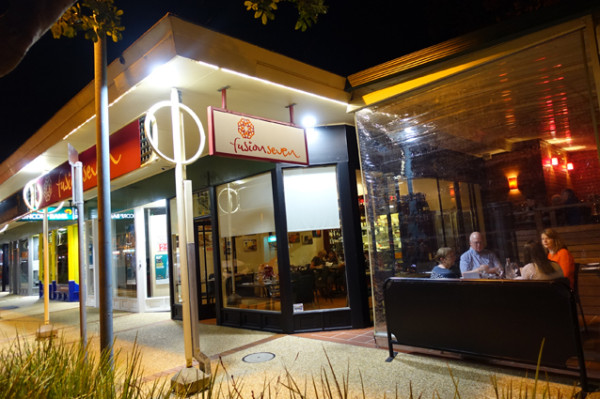 Everyone you speak to about Fusion Seven seems to simper; it's clearly the darling of the Port Macquarie dining set. Though what I found on a recent visit to the area was a restaurant that gets a lot of things right, but at the same time, struggles to convey a raison d'être. Rather than fusing one cuisine with another, the menu reads like an oddball collection of dishes from a competent, well-travelled cook. In a home setting, these exotic ingredients would be segues to stories, but in a restaurant, you’re left to piece that story together alone... 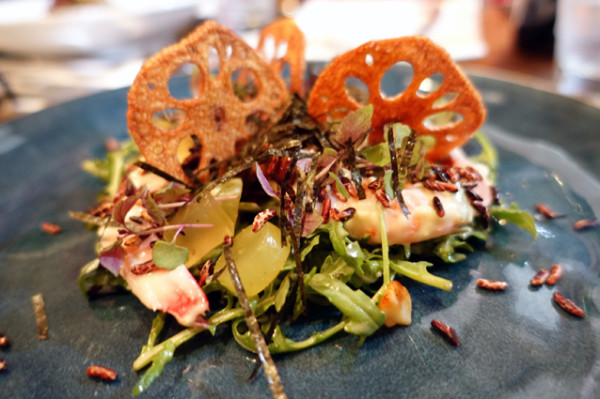 My meal began with a Japanese prawn ‘cocktail’ that tangles three local crustaceans with green leaves, puffed rice, cubes of yuzu jelly, lotus chips, shredded nori and mirin-roasted macadamias. While I liked the individual elements, I also wanted to shake them off to appreciate the quality of the prawns. It's fine to mock those Seventies-style iceberg lettuce prawn cocktail presentations, but what they did get right was allowing the diner to appreciate the colour, texture and flavour of great Australian prawns (well once you scraped off the overbearing sauce...). 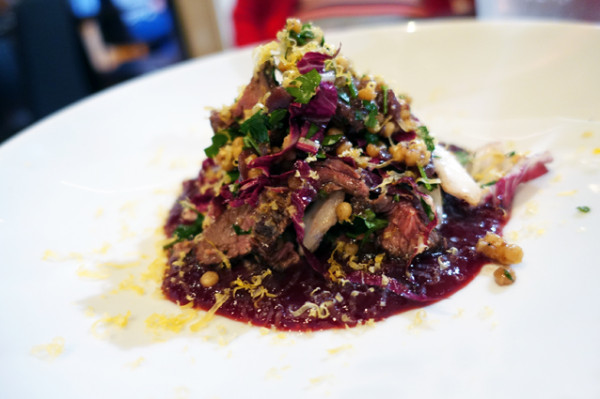 Purple plum jam curbs the irony flavour of grilled kangaroo fillet, but goes so far you might as well be eating beef. It’s served in a generous mound with pearl cous cous, braised red onion and radicchio, under a feathery dusting of salted cured egg yolk. This dish is a perfect match to the 2015 Felton Road Calvert Pinot Noir ($120) which is a reasonable buy here, because you’d be hard pressed to find it in a bottle shop for much less than eighty bucks. 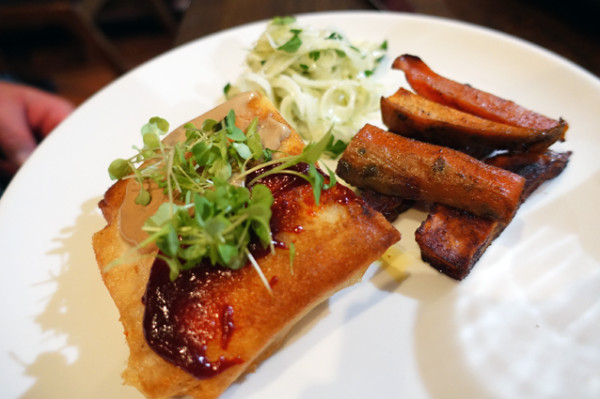 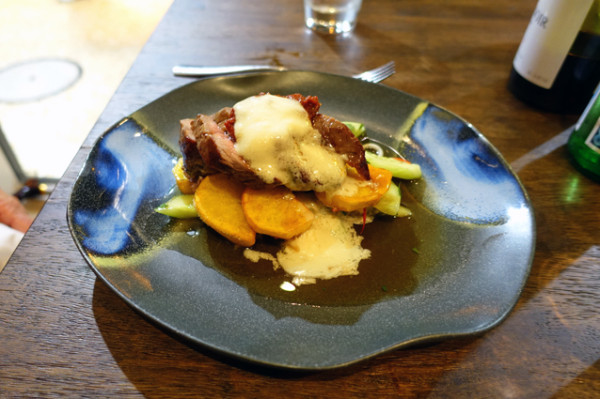 Grilled grass-fed beef rump served tagliata (sliced) on saffron potatoes with a cucumber and palm heart salad caters to my Mother-in-law’s plainer tastes, though she found the beef a bit too chewy. 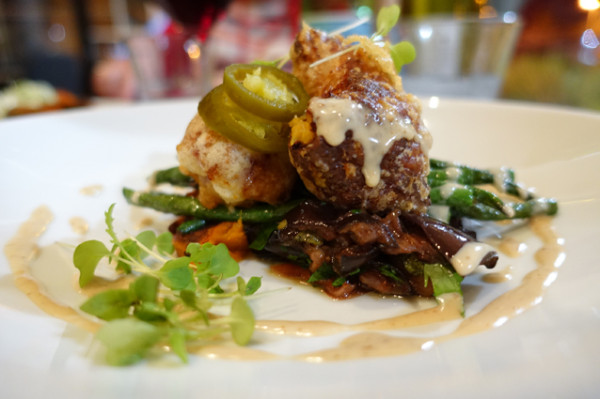 Putting gently spiced lentils inside a deep-fried tofu pocket and then cooking it tempura style is certainly an innovative way to make a vegetarian main exciting. While I commend the chef on actually putting out a balanced vegetarian meal, I’m scratching my head to find a connection between the tempura stuffed tofu, pickled jalapeño slices, and the roast pumpkin, grilled green beans, pear and eggplant salad it was perched upon. 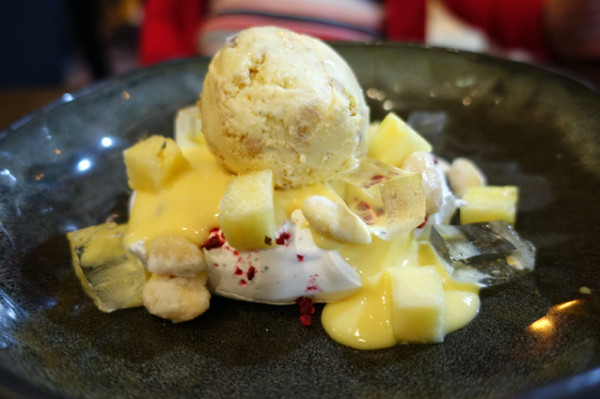 What Fusion Seven does get right is the desserts. Both the apple pie ice cream and the frozen mango parfait were pretty collections of flavours, textures and colours. 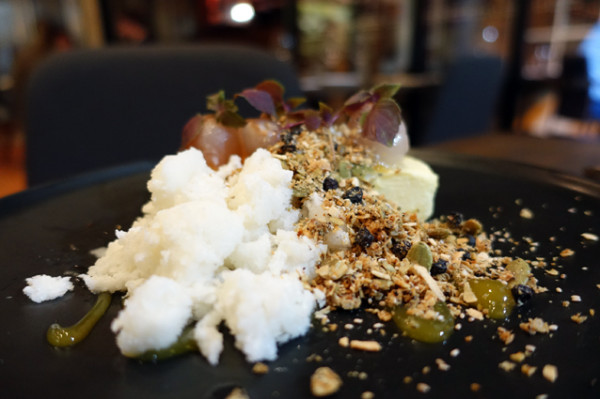 However for a meal where Three Courses ($85/head) comes in just shy of a hundred bucks per person on food alone, I want a bit more than complimentary (albeit great) house-made bread. 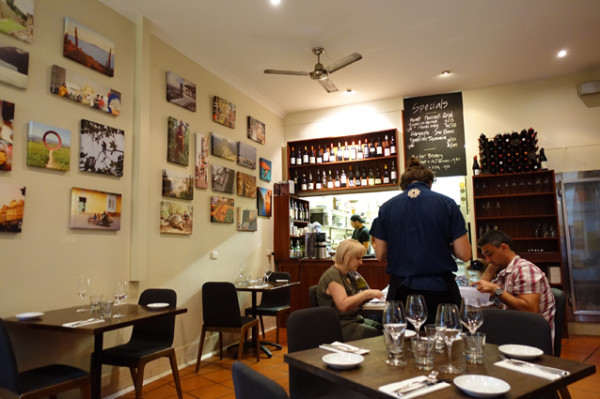 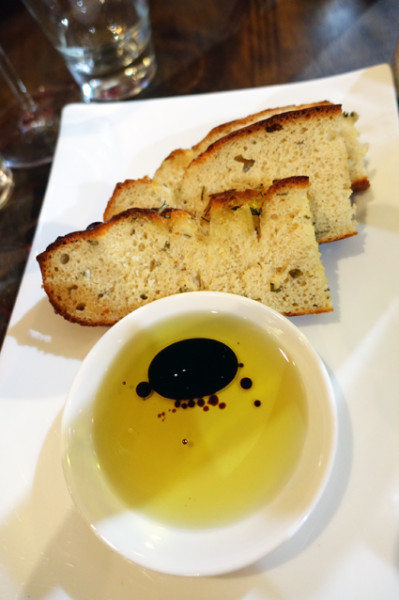 The space itself has a café feel.Toilets are a "grab the key" affair, and on tiny tables in a half-empty restaurant, ambling service required prompting to clear away empty plates and unused glasses. This grates a little more when a fifteen percent surcharge is whacked onto your already expensive meal on the Easter Long Weekend.

Fusion is a difficult brief. It’s challenging to honour two (or more) different cooking philosophies while still keeping the produce you’re working with central to the dish. Regional restaurants are also very different beasts to city ones. Regional chefs have to get conservative diners – like my Mother-in-law – over the line on whatever jaunt they’re taking away from meat and three veg. Whatever a city slicker like me believes, this restaurant has definitely won the hearts of Port Macquarie, and in a regional area, that might be all that matters.