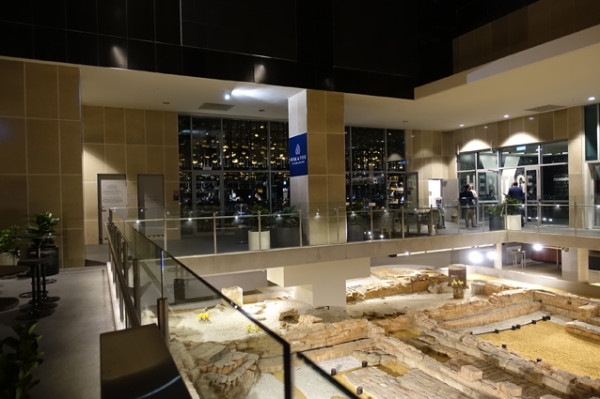 With 518 brand new residential apartments above it, and 1400 artifacts below it, Husk and Vine Kitchen and Bar sits at the juncture between old and new. According to Wayne Taranto of Crown Group, the restaurant is “part of the changing face of Parramatta.” It sits below the suburb’s first five-star hotel, Skye Hotel Suites, which is set to open in August. 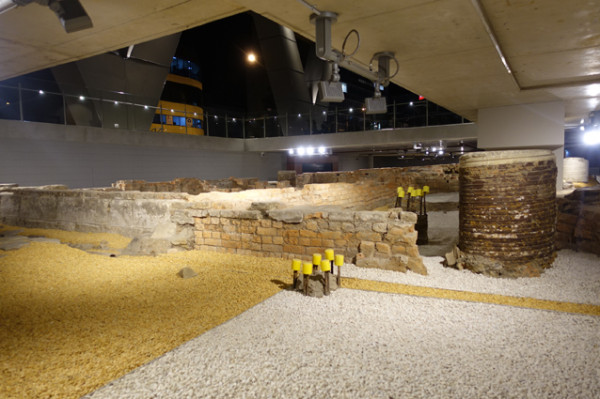 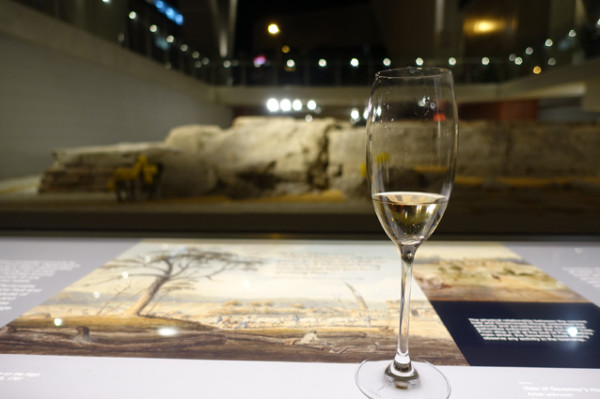 During the excavation for this large-scale development, Crown Group uncovered significant archaeological remains that they have preserved as part of their final structure. They include a 1840s convict's hut, a wheelwright’s workshop, and the cellar of the former Wheat Sheaf Hotel, all sitting right underneath the restaurant. They’re connected by a flight of stairs that allows restaurant guests access to the impressive collection of artifacts, and via a glass floor that offers a glimpse of the archaeological dig from the restaurant’s terrace. 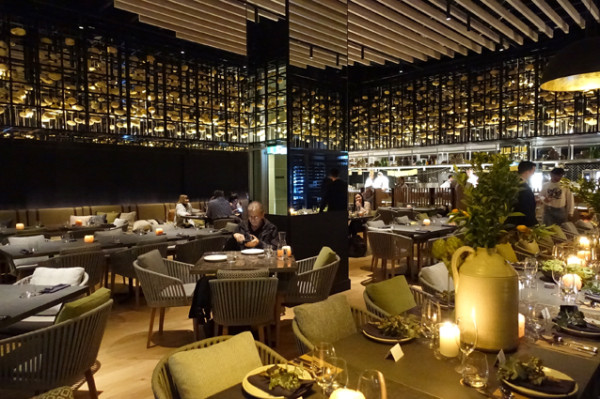 Connection to this Parramatta of old also informed the restaurant’s wheat and wine concept. You’ll also find connection in the unusual décor choices created by Nic Graham. Hundreds of styrofoam 'sandstone' boulders are suspended on strings in mirrored boxes, creating an otherworldly cube with moody low lighting. On two sides the room is surrounded by an impressive open kitchen and bar. The all-important eats have been left in the hands of Ambassador Chef Stephen Seckold (ex-Flying Fish). 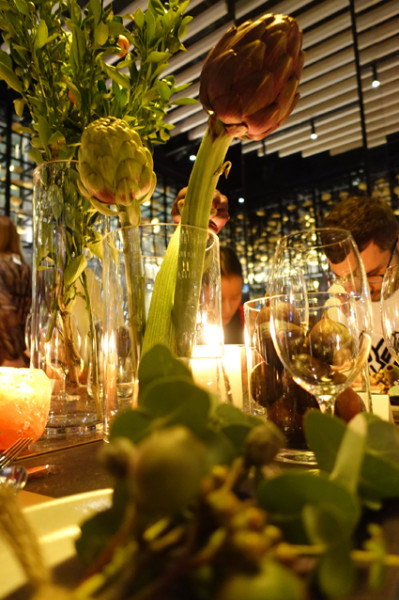 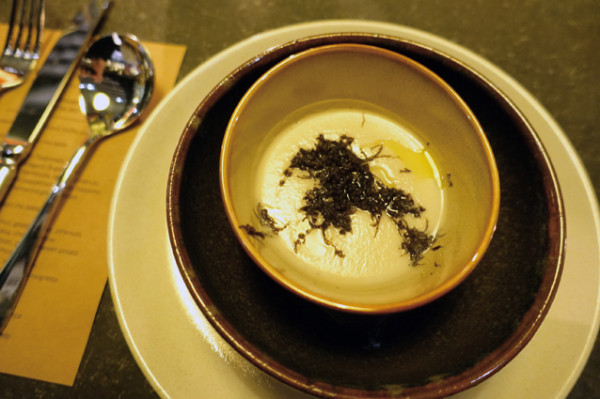 "Rather than sticking to one sort of food we'd take influence from all over the place," said Seckold. Reading like modern comfort food, Seckold’s menu is designed to warmly welcome all of Parramatta through the inclusion of multicultural dishes, "without messing with anything," he added. His menu will also pay close attention to seasonality - on the evening I dined this was evidenced by artichokes forming both table decor and appearing in a silky Jerusalem artichoke and truffle amuse bouche. 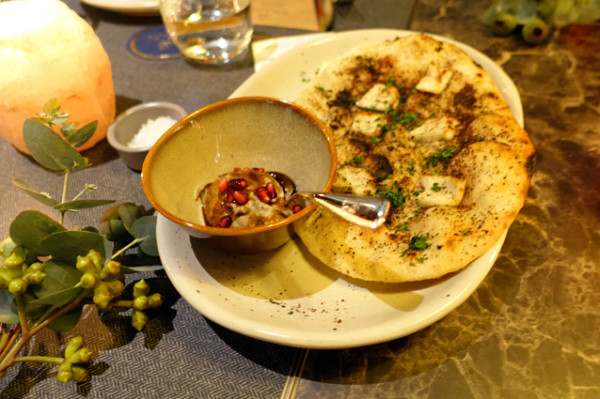 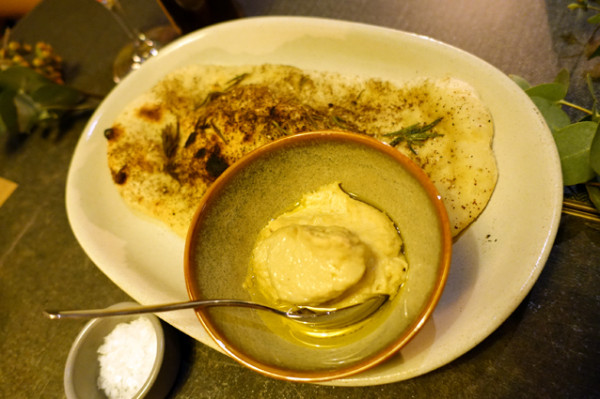 On any evening you can take the opportunity to break Rosemary & Sesame Flatbread ($15) with your fellow dinners at a long convivial table, and smear your torn portion with warm hummus. The flatbreads and pides, including Haloumi, Sumac, Roast Garlic and Parsley Flatbread ($16) are cooked in a Beech clay oven. 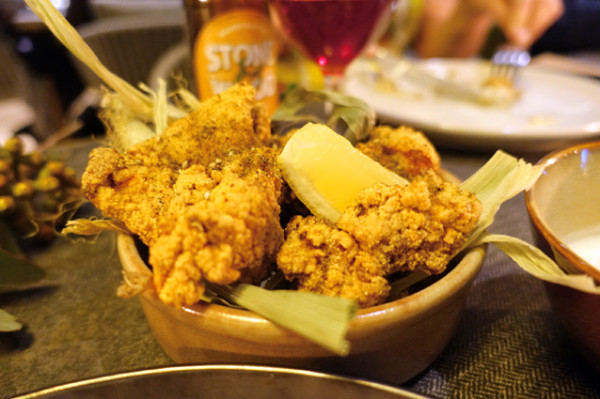 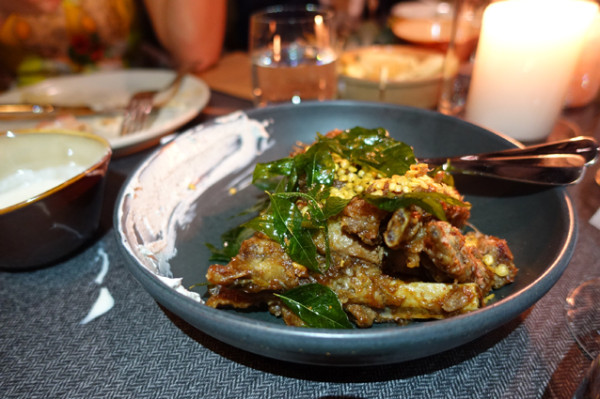 The lamb ribs are good – neatly avoiding the usual traps of being too greasy or too gamey - and even better when dragged through the accompanying smear of labne. 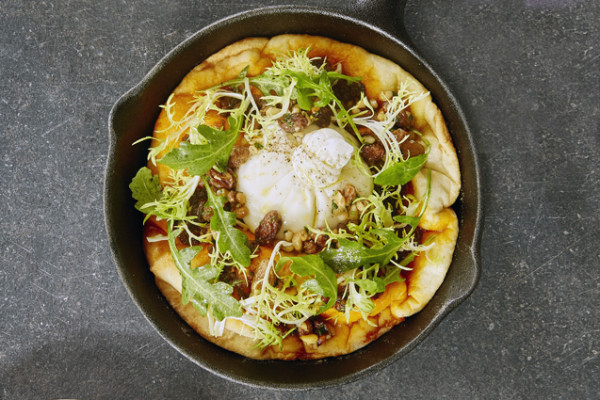 Your must-have entrée is a skillet of Burrata Cheese ($19) presented on garlic bread with a cumin-heavy chermoula treatment, raisins, green leaves and pine nuts. It’s unusual but it works! 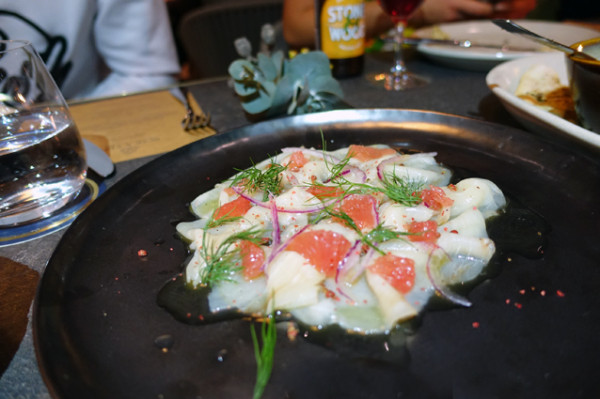 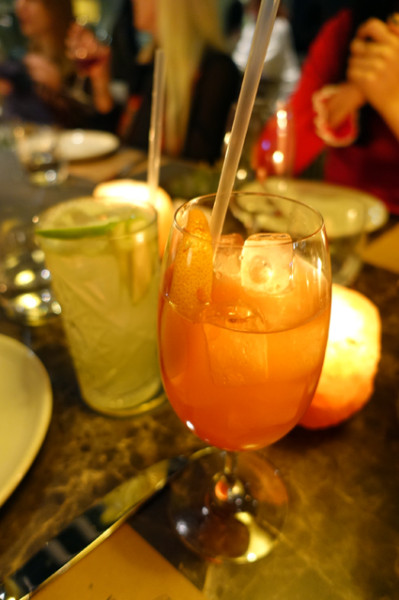 If for some strange reason you’re anti-cheese, there’s also a Swordfish Crudo ($23). The delicate fish is given a grapefruit, white balsamic and pink peppercorn treatment that’s pleasant but was slightly dominated by olive oil on the evening I dined. You'll also find pink grapefruit making an appearance on the cocktail list, in a quaffable Grapefruit Spritz ($12). 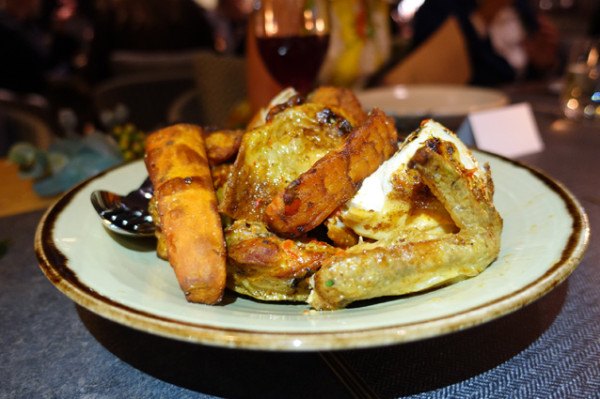 With the restaurant’s theme really leaning towards relaxed, convivial, sharing cuisine, the large share mains like Whole Butterflied Chicken ($45) with chilli, lemon and paprika sweet potato, and Lamb Shoulder ($65) with harissa, okra and chickpea stew, are going to be popular ways to dine. 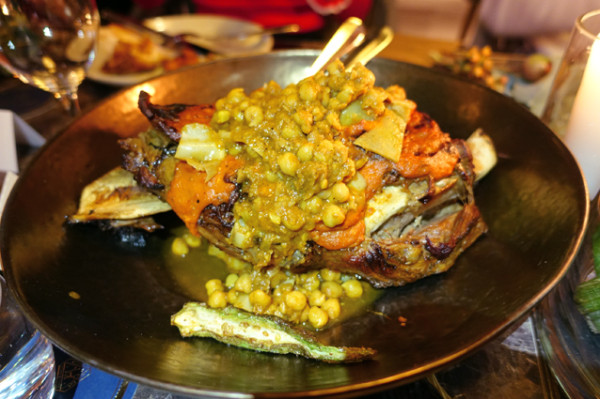 To my palate both of these dishes were under-seasoned, but I suspect it’s part and parcel of them being presented as a please-everyone ‘family’ style meal. With good quality sea salt on every table, each guest is of course then free to season to their personal proclivity. 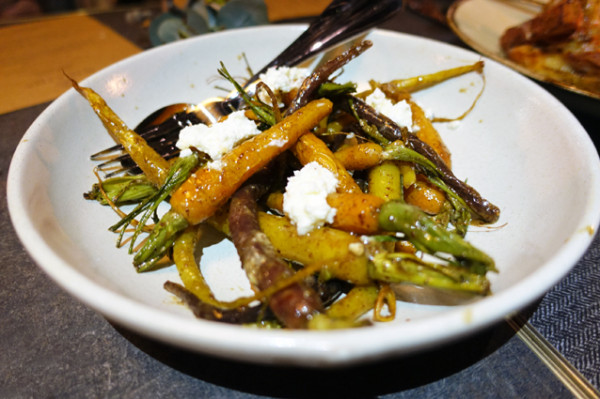 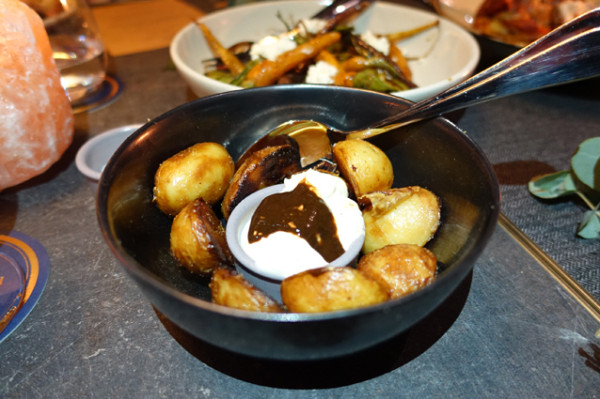 Build these sharing mains into full meals by throwing in sides like Baby Carrots ($11) in cumin, honey and Persian feta, and Chat Potatoes ($12) with intense black garlic offset by sour cream. The 2016 Ross Hill Pinnacle Chardonnay ($80) makes a nice poultry companion. For the lamb shoulder, the 2015 CRFT ‘Chapel Valley’ Pinot Noir ($80) will do the job without having to resort to anything more tannin-heavy from the interesting wine list that centres upon on Australian cool climate wines. 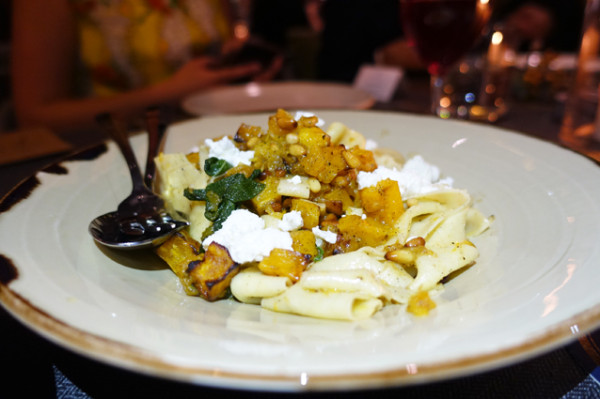 For those who don’t like sharing, you could do much worse than your own bowl of silky Hand Cut Pappardelle ($24). You’ll see the thin strands of wide cut pasta hanging in the open kitchen. They’re given a simple burnt butter treatment with cubes of butternut pumpkin, pine nuts and goat’s cheese, and scrub up a treat. 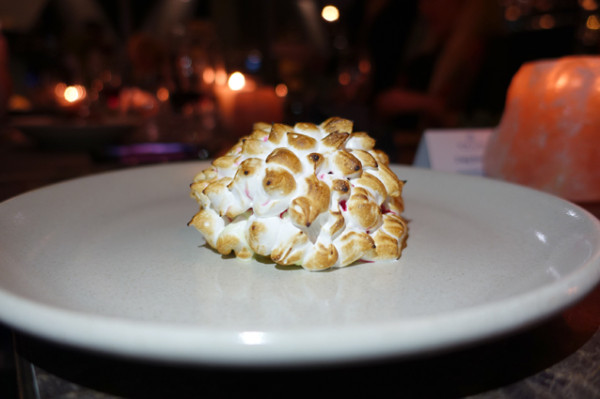 The short dessert menu offers up modern renditions of the classics. The pistachio and raspberry Bombe Alaska ($16) won fans at my table, but I found it dominated by the marzipan biscuit base. 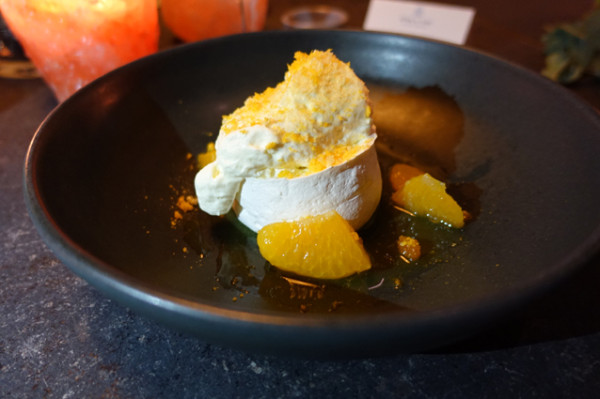 I’ve got no complaints about the pretty Pavlova ($15), tarted up into something quite adult using sharp tangerine and orange blossom cream.

There's plenty to like about this new Parramatta player who hope to revolutionise the suburb's upper end dining with their accessible, relaxed, sharing menus. Later in the year Husk and Vine will be joined on the site by the influential bar guru, Sven Almenning. Almenning will be opening a rooftop bar on the twenty-sixth floor, providing the perfect way to kick off, or conclude, your introduction to the new Parramatta.