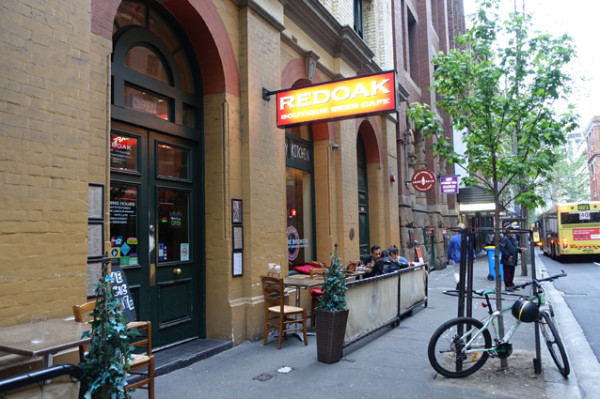 Redoak Boutique Beer Café feels spacious inside. The long room is divided down the middle into bar and dining room, with heavy velvet, theatre-grade curtains muting the conversations of your neighbours. It’s a more civilised, genteel beer hall experience; which clearly agrees with women, because (for once) we’re not in the minority. 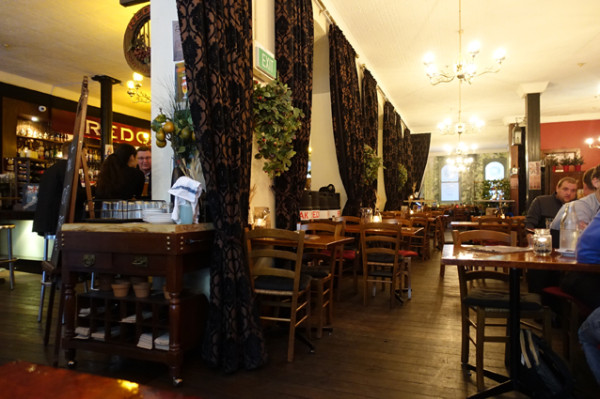 It’s also hard to argue with fourteen years of success in hospitality. Brother and sister team David and Janet Hollyoak opened this in 2004, well before Sydney went craft beer mad. They make their own beers, which make up the bulk of their list, in a dedicated Camden brewery. Keeping the food miles low, they’ve supplemented their bottled beer range with some other Australian brews. 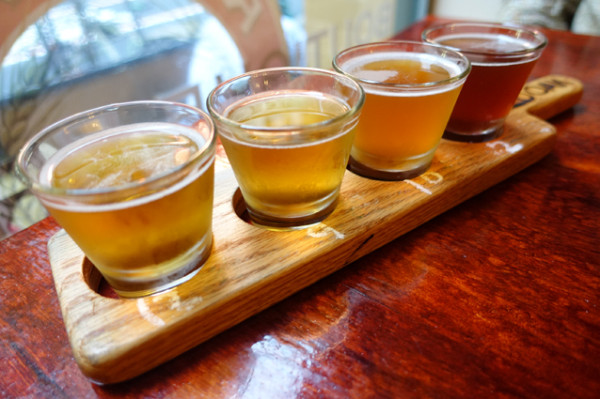 Pick up a wooden Tasting Paddle ($12) and a piece of chalk, write the numbers of the tap-beers you wish to try next to the four holes, hand it to the bartender, and you’ll be off and drinking! The Redoak Honey Ale ($7.50, $9.50, $13) is a pretty place to begin, especially if you’re not generally a beer drinker. It takes a light pale ale, and treats it with organic Tasmanian leatherwood honey. Having developed a taste for sours, my personal preference was the Redoak Aged Saison ($13.50/pint). This beer has been aged in a stainless steel tank for over five years. It has both sweet and tart elements that see it drinking somewhere between a beer, a wine and a cider. 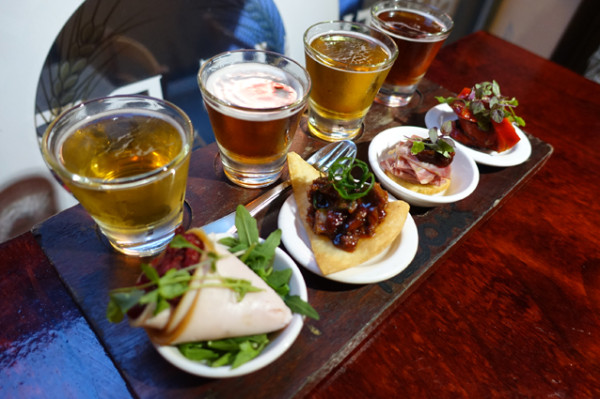 Beyond beer, the other key focus of this venue is beer-food pairings. Tasting Boards ($30) come in either meat or seafood, and present four savoury bites against four tasting beers. With many of the bites presented on crackers, they're not particularly easy to share, so you might want to consider getting one to yourself. 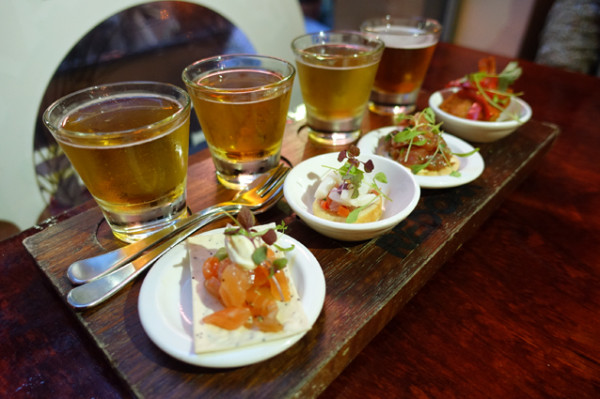 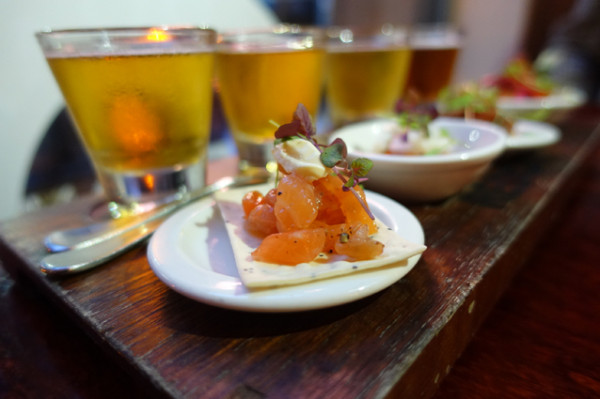 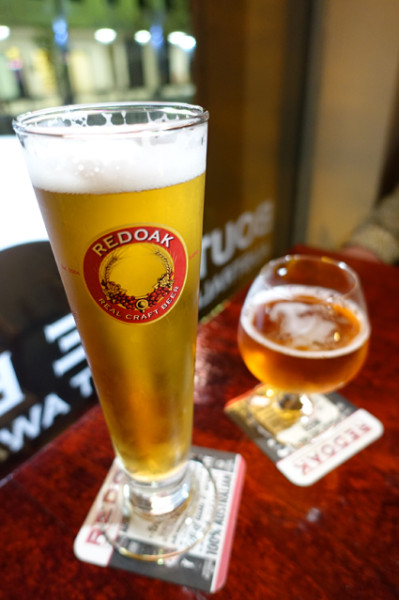 If you like what you try on the boards, you can graduate to one of their monthly Beergustation Dinners ($99) where a five-course meal is matched to six different beers. It’s a bit more of a serious affair where you get to hear from the beer sommelier, and the chef, about why they’ve chosen the matches. 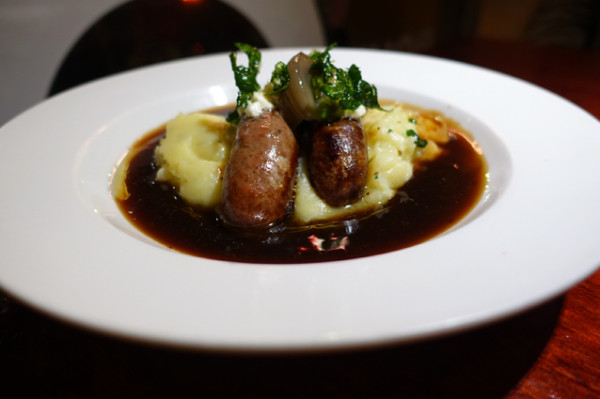 The broader menu is largely unfashionable, which in such a rapidly changing, trend-driven town seems quite refreshing. Lamb shanks, snags, steaks and ribs combinations and burgers, are all confirmed crowd pleasers. Arriving on a bed of smooth, creamy feta mash surrounded by a lake of red ale jus, Lamb & Rosemary Sausages ($29) is an honest dish; with just enough fried parsley to legitimately say a green was present. 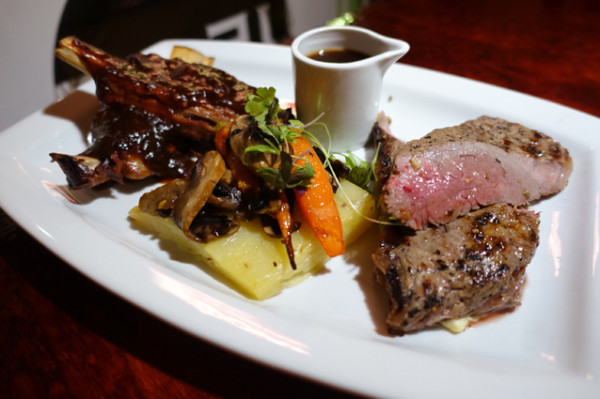 Beef Two Ways ($38) is a better-balanced meal with sirloin and back ribs presented with celeriac puree, roasted Dutch carrots and mushrooms, and dauphinoise potatoes. The sirloin is the star of the plate, smoky and juicy against a well-integrated jug of jus that has just a whisker of sweetness. 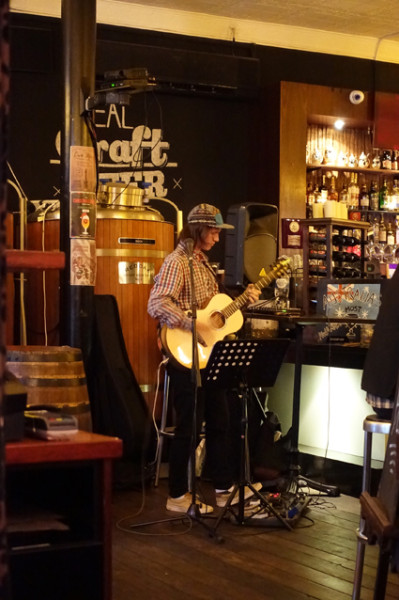 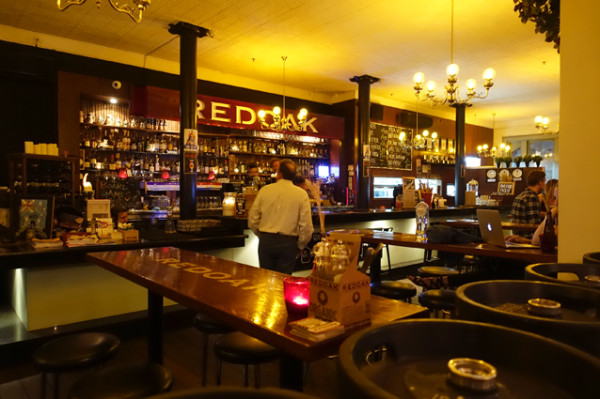 Finally, if you choose to dine on a Wednesday or Friday, you’ll also get live entertainment. On the evening I dined (thanks to the Australian Good Food Guide) it was a talented solo guitarist and singer taking up the challenge of Stevie Wonder, and the Jimi Hendrix version of Bob Dylan’s All Along the Watchtower. By my reckoning, he did a great job with both.

NOTE: See a previous visit to this venue HERE.