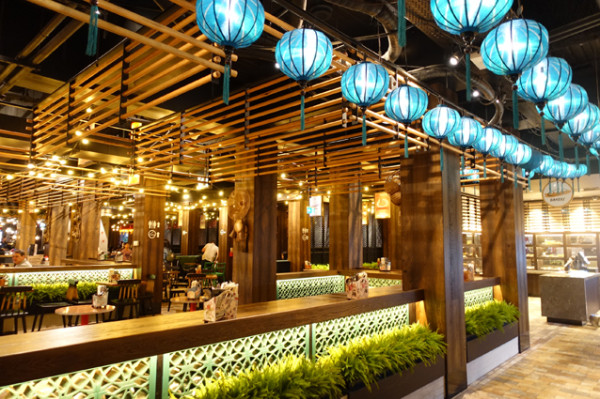 Clubs service larger numbers of diners than most Sydney restaurants but get a disproportionately small amount of media attention. Over the last few years, they’ve really been lifting their game, adding innovative and interesting food offerings right across Sydney. 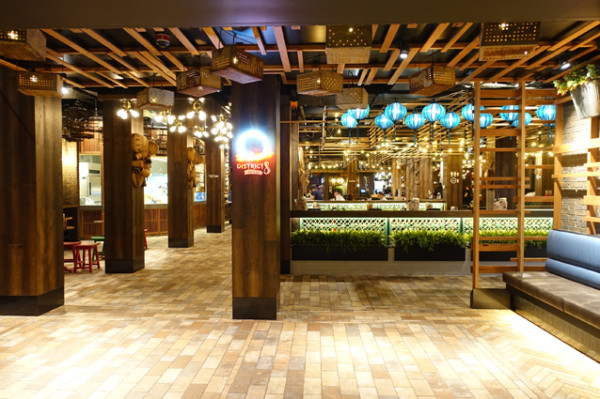 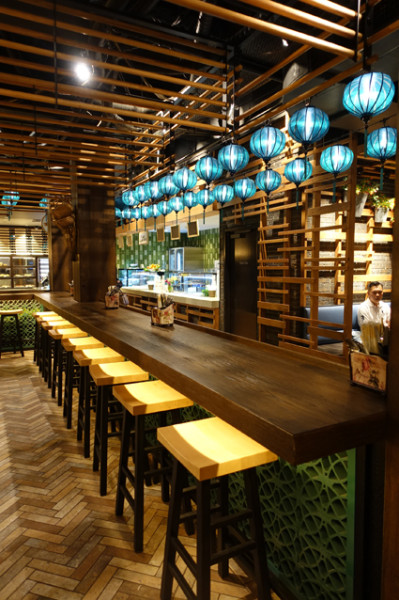 Sitting on the border between Canley Vale and Cabramatta, Cabra-Vale Diggers, is no exception. As part of a multi-million dollar redevelopment project that’s still underway, they’ve opened District 8. 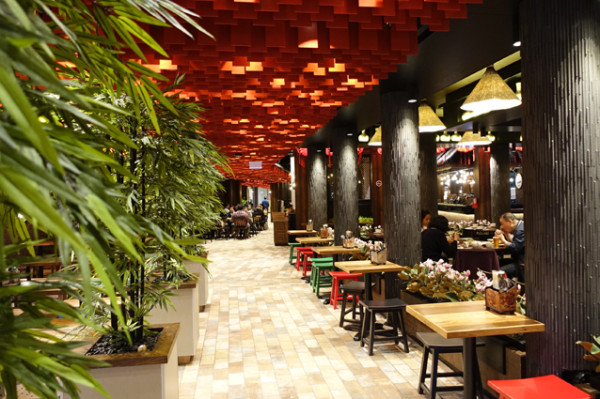 District 8 sits somewhere between a very flashy food court and a hawker-style market – with better booze and bathrooms. Take it all in with a meandering journey around the full 2000 square meters, and assess where you’d like to park – there are 600 seats to choose from. It's an assault to the senses as you stroll down their leafy green avenues, with colour, texture and lighting all used to good effect! 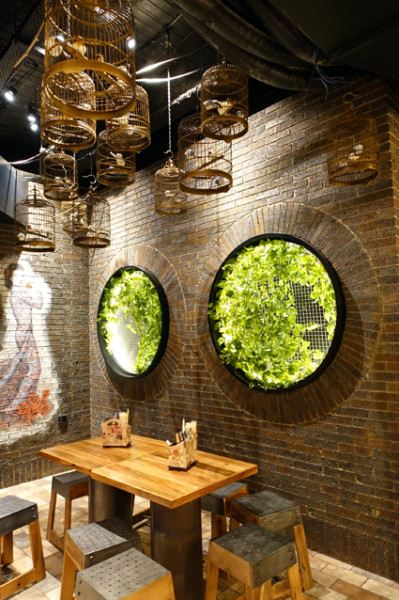 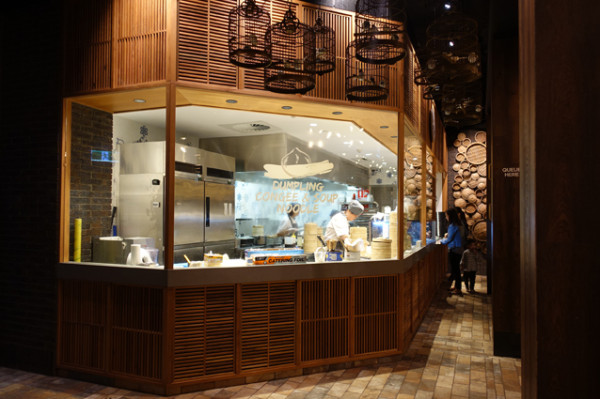 Above your head you’ll see a cacophony of hanging birdcages complete with a chirping soundscape that took me straight back to the flower and bird market in Shanghai. 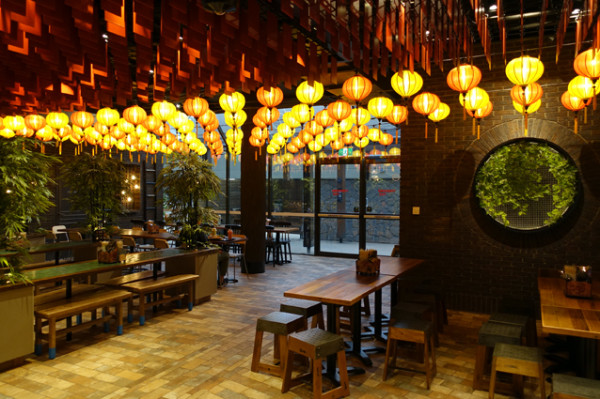 There are also rows of beautiful yellow and blue lanterns, and a virtual overhead river made up of bright red hanging timbers. Think of it as representing the mighty Mekong, because the food offerings you're about to be eating traverse its winding path through South-East Asia. 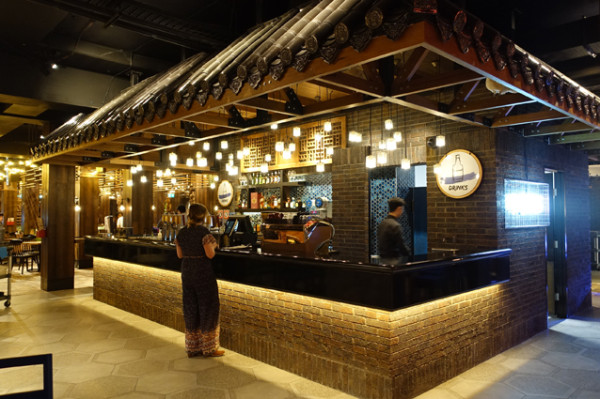 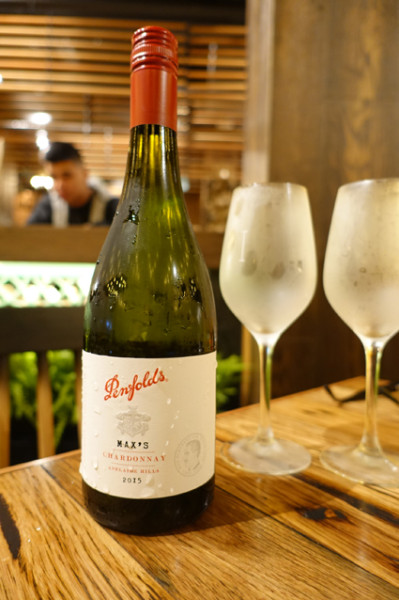 We started by hitting up the bar for a drink. It’s located in the centre of District 8 under a rooftop made of glazed roof tiles that were imported from China. While high rollers can drink all the way up to the 2008 Grange ($750/bottle) we were perfectly happy with a bottle of the 2015 Penfolds Max’s Chardonnay ($50/bottle). It’s an austere but elegant Chardonnay, served with cool frosty glasses, which I appreciated but the wine didn’t. 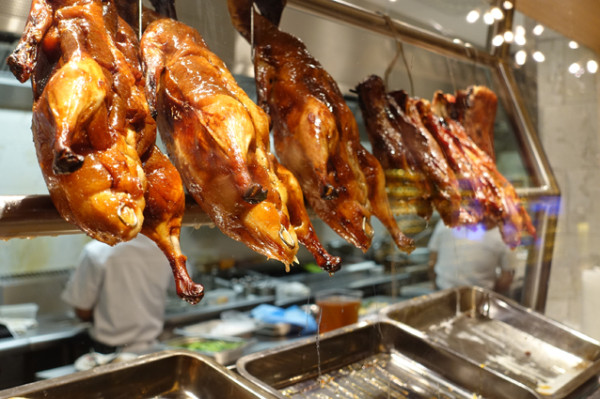 Once it warmed up a little, it was good for cutting fat, without dominating our lighter Vietnamese dishes. 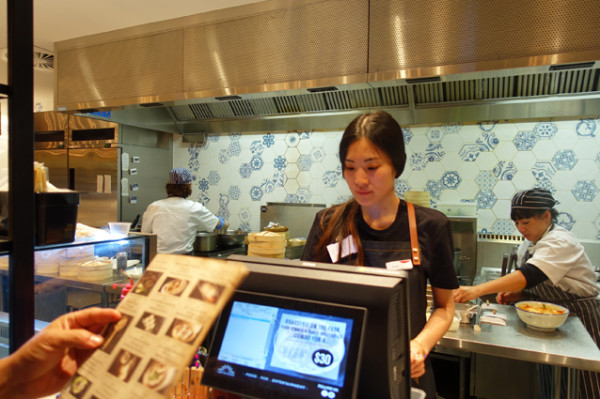 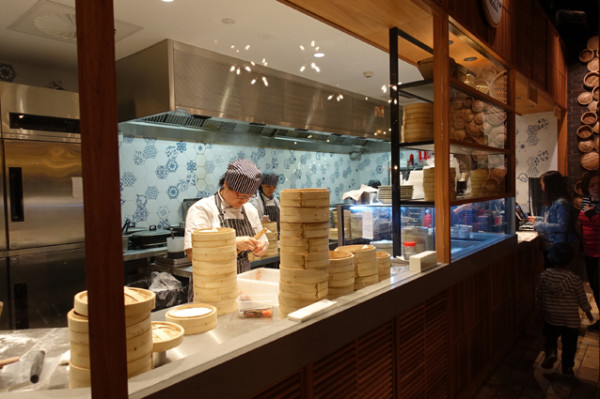 Now here’s where things start to get a bit complicated. Ordering is done in one of three places, depending upon what you’re interested in eating. Once you pay, you’re issued with a buzzer that will go off when your food is ready. You collect food from the relevant service window. As the windows are quite narrow, and not fitted with heat lamps to keep dishes warm, they don’t hold food over - even if you order from the one outlet. This means you should expect your buzzer to go off for each individual dish. My suggestion is, the best strategy for a leisurely meal is to order and pay for one dish at a time, especially if you’re dining as a couple. Otherwise you’ll be spending half your time away from each other and the table – something that’s probably only desirable if it’s an awkward Tinder date. 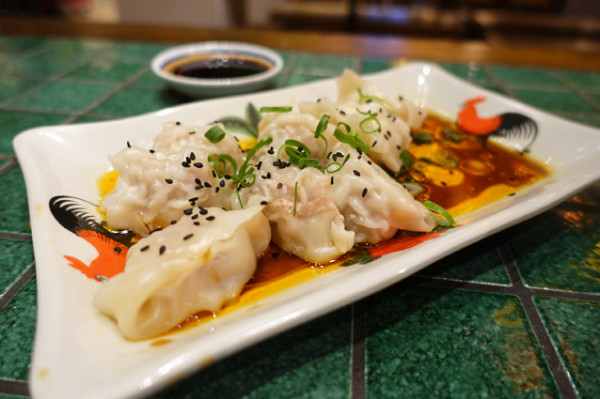 We started our meal with dumplings – Shrimp and Pork Wontons with Spicy Sauce ($8/8 pieces) – followed in rapid beeping succession by their signature Xiao Long Bao ($7.50/6 pieces). 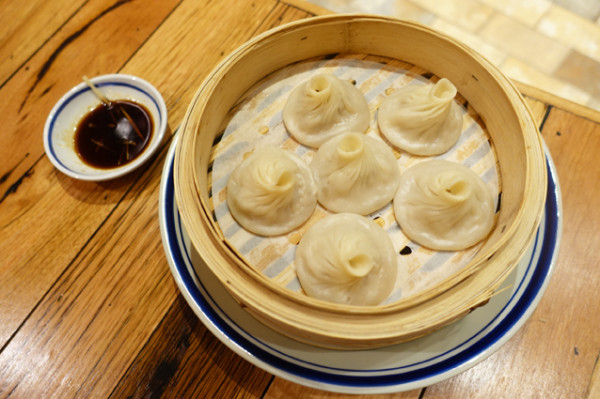 The latter are handmade onsite, stuffed full of minced pork and pork jelly cubes that help to create a hot mouth-explosion. You have been warned. 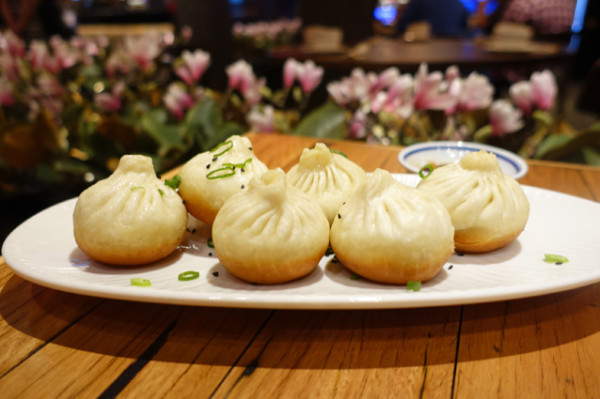 To make the crisp-bottomed Pan Fried Pork Buns ($7.80/6 pieces) sing you might want some chilli sauce. You’ll find it at one of two saucing stations that service the whole place. To avoid side-eye from your dining companion who is probably starting to have abandonment issues, it’s best to load up before the avalanche of dishes start arriving. While you’re there, pick up some napkins, because unlike cutlery, they’re not available on your table. 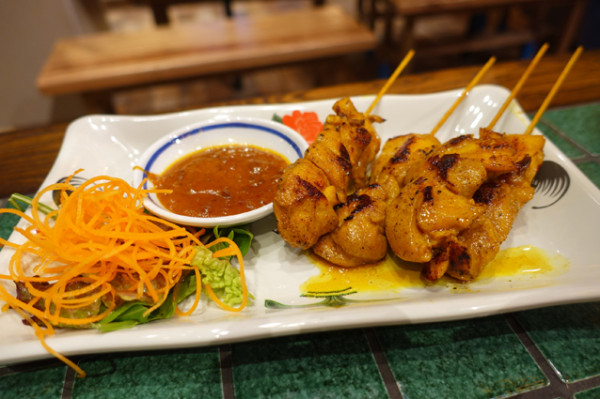 Before we’ve eaten more than a dumpling each, our buzzer goes again, and we’re ducking and weaving to collect plump Chicken Satay ($8/4 pieces) accompanied by a reasonable satay sauce. Despite the venue’s considerable effort in creating an appropriate soundscape, it’s actually the shrill ringing of buzzers that is my meal’s constant soundtrack. It’s making me a bit anxious – though it’s probably my fault for ordering so many dishes. 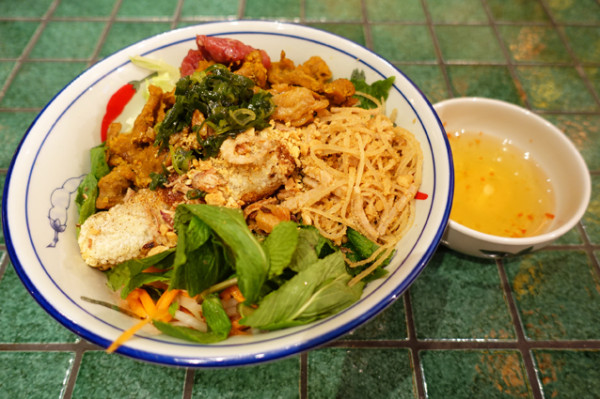 I finally relax into a Bowl of Vermicelli ($13). It’s a summery, Vietnamese meal-in-a-bowl. The bed of vermicelli noodles is adorned with grilled pork neck, pork patties, chao tom (sugarcane prawn), a chopped up spring roll, pickles, herbs and roasted peanuts. Drizzle it with the accompanying nuoc cham, give it a good stir and enjoy this warm, well-priced salad that’s diverse enough to keep you interested the while way through. 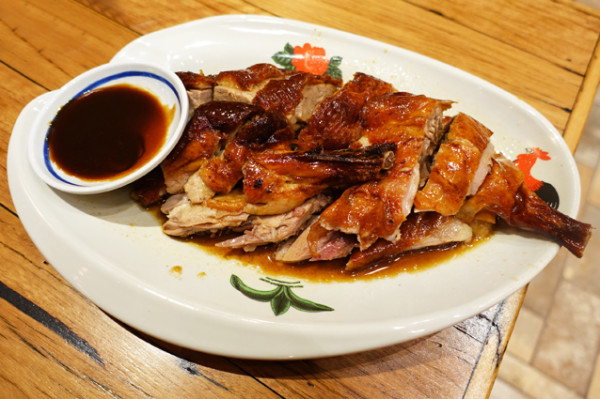 From the Hong Kong BBQ we order one of the gleaming, hanging crisp-skinned ducks that had caught our eye on our walk-around. Even a half-serve of Cantonese Duck ($24.80/half) proves a bit rich and fatty for a couple to get through, so we pay an extra buck for a plastic container to take the rest home with us. 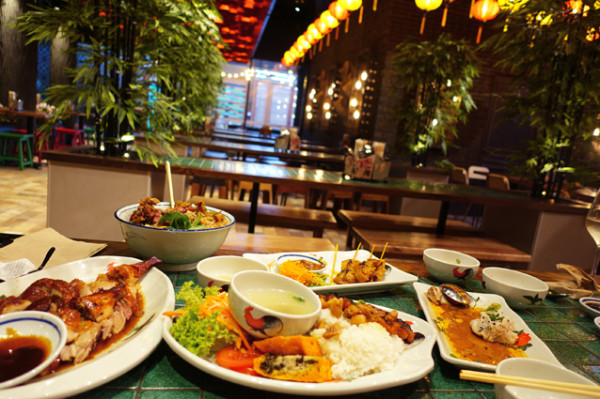 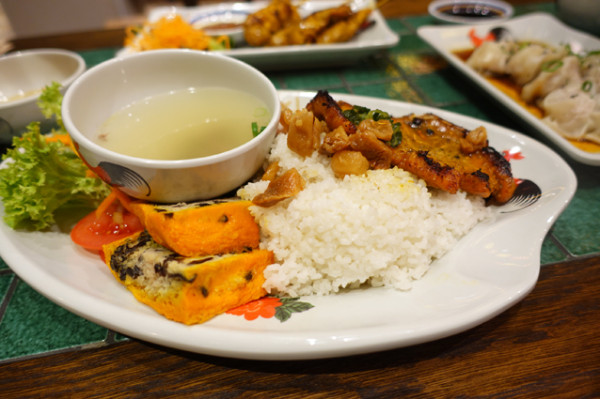 To my eye, District 8 is over-delivering at the price point in a beautiful, air-conditioned dining environment. There’s even a giant kids playground at one end, where you can eyeball your offspring while you eat. 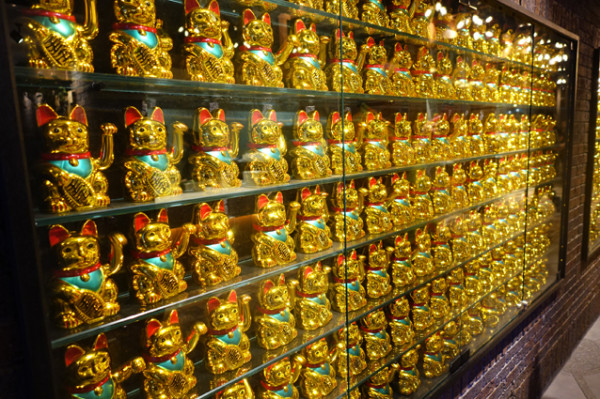 Eight is an auspicious number in Chinese culture because the number sounds like the word for wealth and fortune. Along with the eight food outlets, District 8 also has a fun wall of waving Maneki Neko. These shiny, gold lucky cats were imported from China, and are all waving their left paw. This is supposed to attract customers – a clever idea if they are to fill all of those 600 seats.