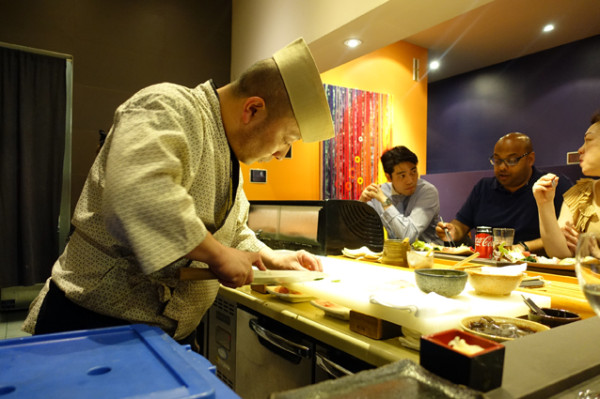 Despite HaNa Ju-Rin being a well-established Crows Nest restaurant, scoring a seat at their sushi bar still feels like an accomplishment. After all, you’re taking up one of just ten of the evening’s opportunities to place yourself in the capable hands of Tomoyuki Matsuya for his Omakase Sushi Course ($132/head). 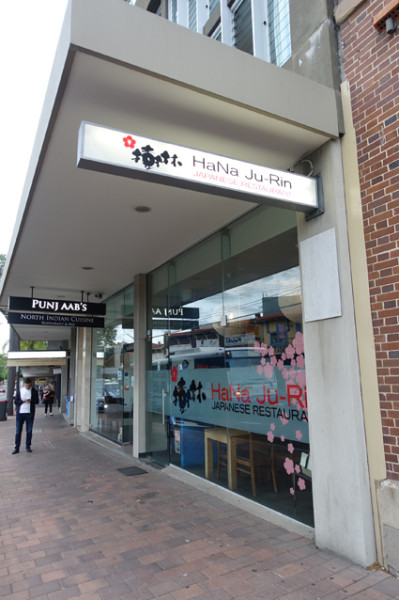 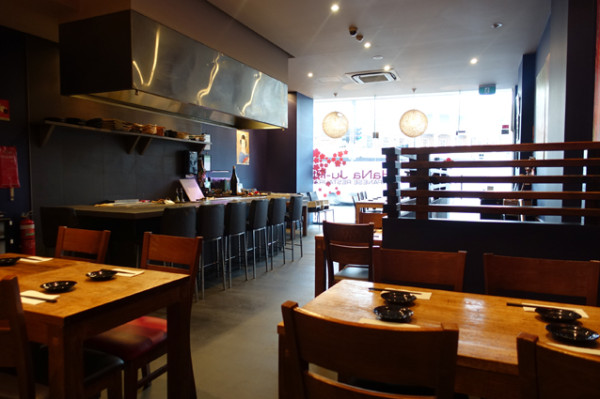 Occupying one of the best seats in the house, you will watch your meal unfold in the flowing yet economical movements of this second-generation sushi master. 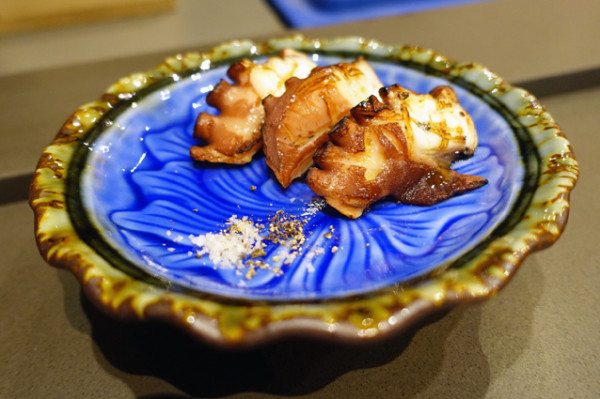 Fat, lightly charred slices of Fremantle octopus are drizzled with truffle oil, and then dragged through tiny mounds of pepper and salt. The tender, meaty flesh helps to sate your initial hunger, while they get your drinks organised. 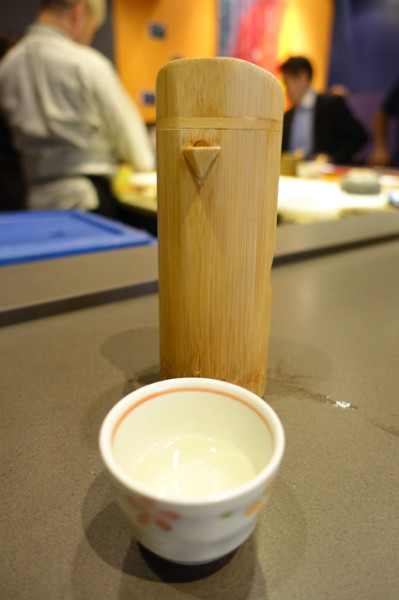 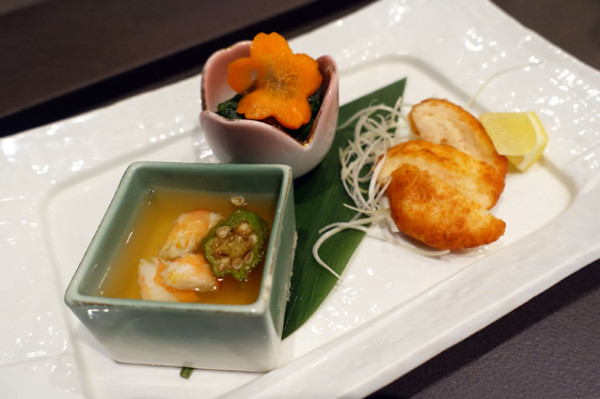 For me that’s a bamboo tokkuri of Chiyomusubi Junmai Daiginjo ($15/180ml). Pretty and gentle, this sake is just the ticket to accompany our appetisers, which include a pot of Japanese plum jelly encasing fresh prawn and green chilli. 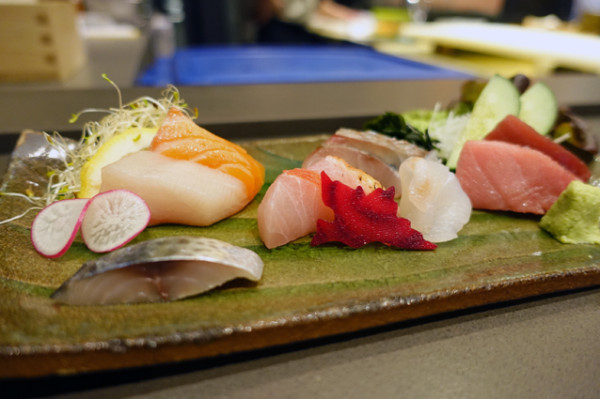 The flash of Matsuya-san’s knives clues you in that lustrous fishes are next on your dining agenda. The 10-piece sashimi course introduces you to the day’s catch – tuna (and chutoro), snapper, trevally, imperador, alfonsino, bar cod, salmon, kingfish and mackerel - before they’re expanded upon in the 15-piece nigiri sushi course. 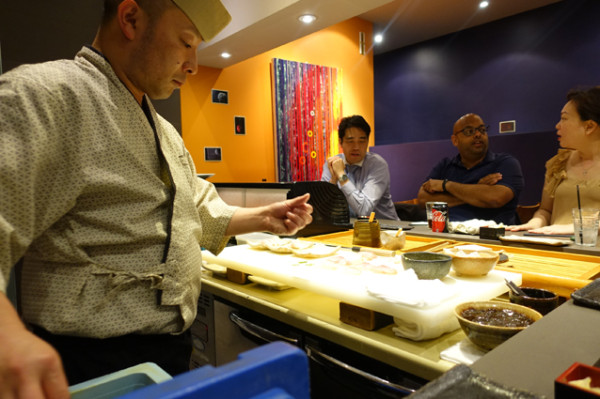 The artistry for me is in Matsuya-san's dance of forming the rice, shaping it with two fingers and a clap. 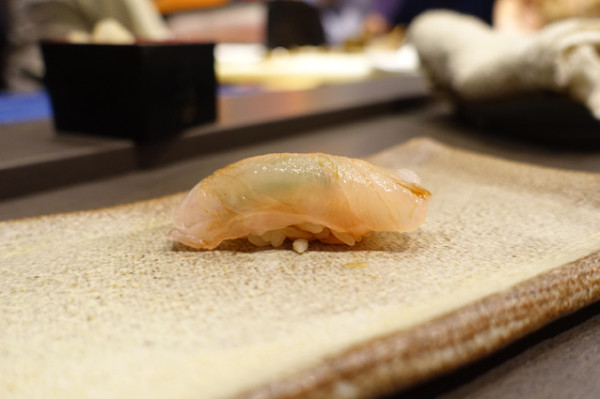 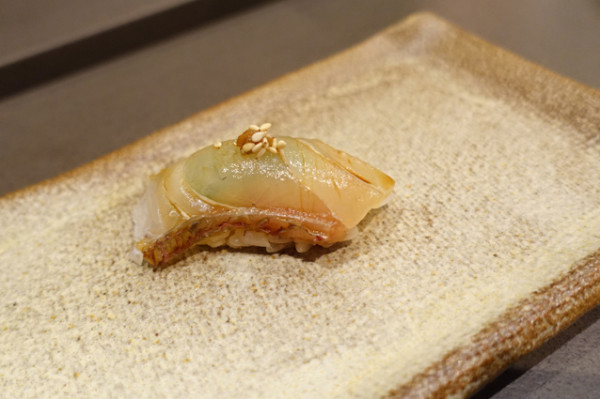 It’s layered with shiso and a transparent slice of bar cod glistening with yuzu soy. The fish is pleasantly chewy against the well-balanced rice mix. It’s quickly followed by snapper with pickled plum, bonito flakes and sesame. 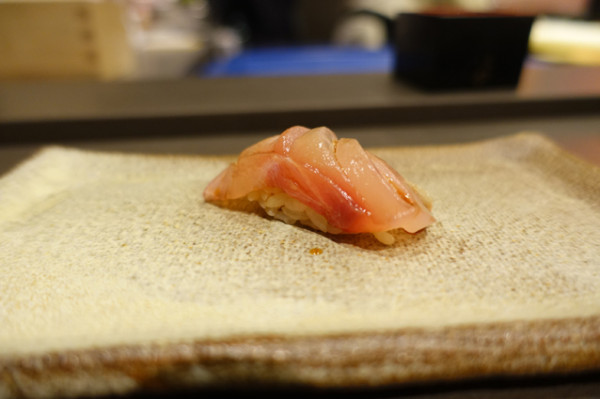 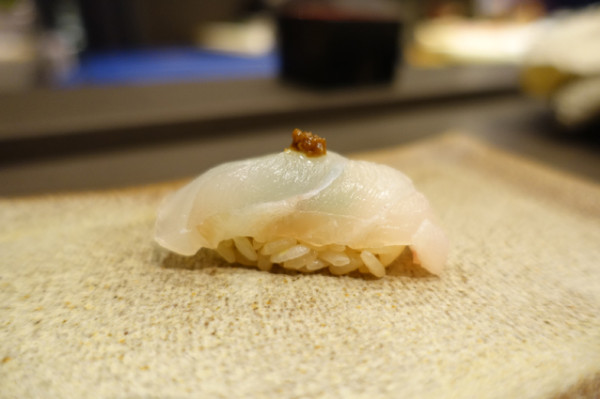 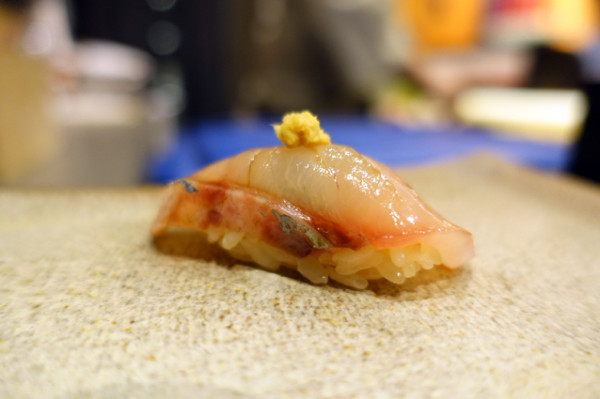 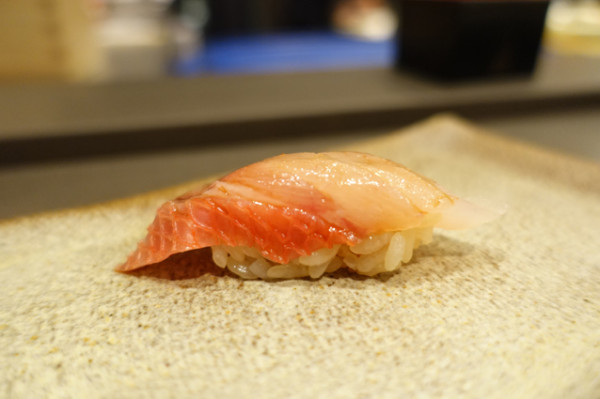 As we move through trevally accentuated with ginger, and the red-tinged alfonsino, I begin to really appreciate the underlying rice. 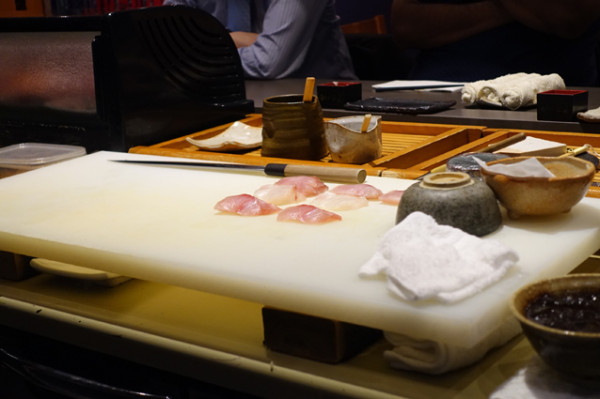 Rather than sweet, it has got a good balance between sweetness and tartness, with the well-defined grains turned slightly brown from the particular red vinegar that Matsuya-san employs. 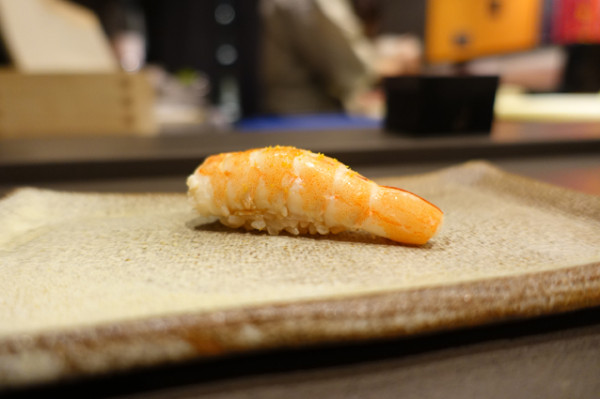 A jolt of finely diced yuzu (Japanese citrus) tucked under a cooked prawn reawakens your palate before the next set of richer offerings. 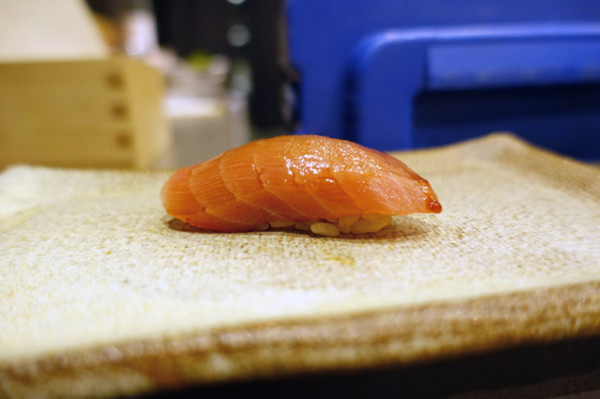 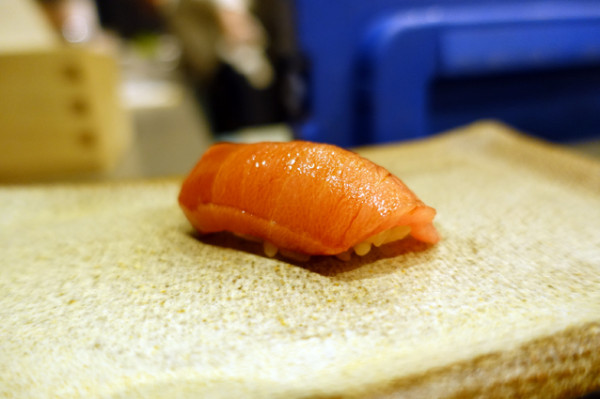 There’s lean blue fin tuna marinated in soy, followed by the fattier chutoro. The latter has been aged for two weeks in an icy box to concentrate its flavour, which is creamy and mouthcoating. 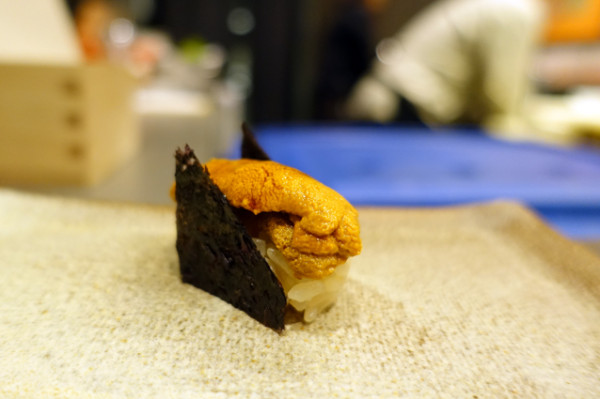 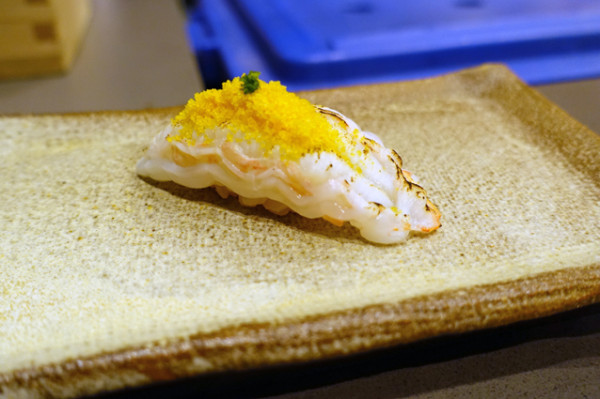 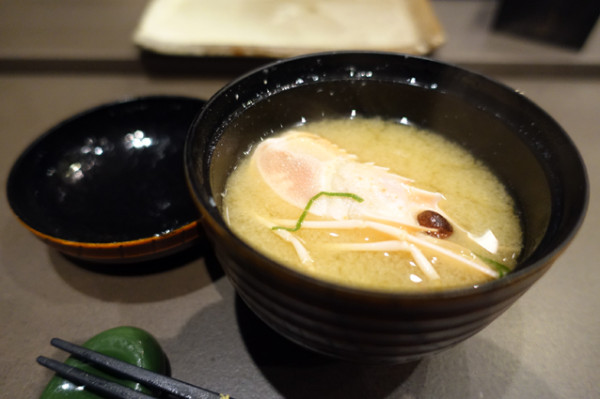 For me the menu highlight is the scampi – lightly blow-torched on one side, and raw and creamy underneath. It's crowned with a yellow mountain of house-made karasumi, a rich and salty dried mullet roe. The crustacean’s head is also put to good use in a steaming bowl of miso that accompanies it. 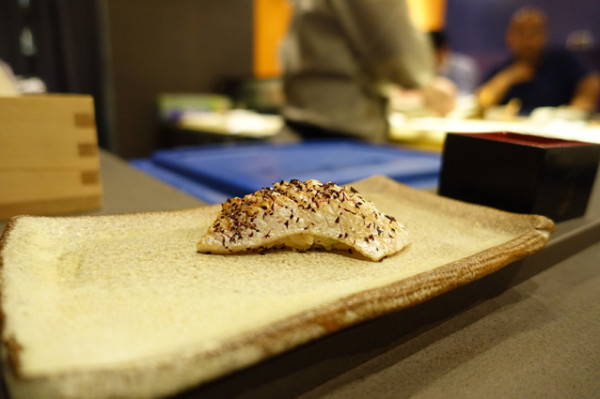 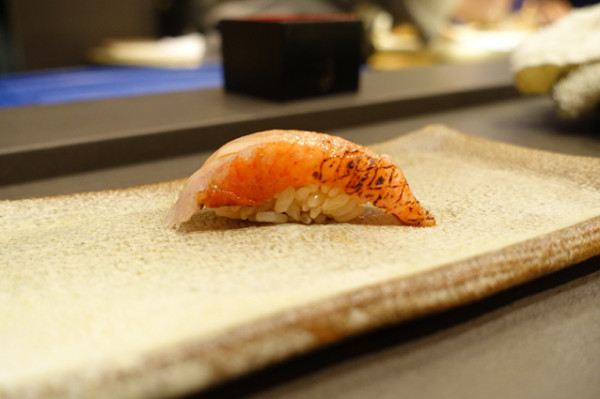 Running out of puff we move through seared kingfish and alfonsino with delicately blow-torched skin. I marvel that I haven’t missed applying my own soy or wasabi throughout this meal, instead allowing Matsuya-san to have complete mastery of the fish. 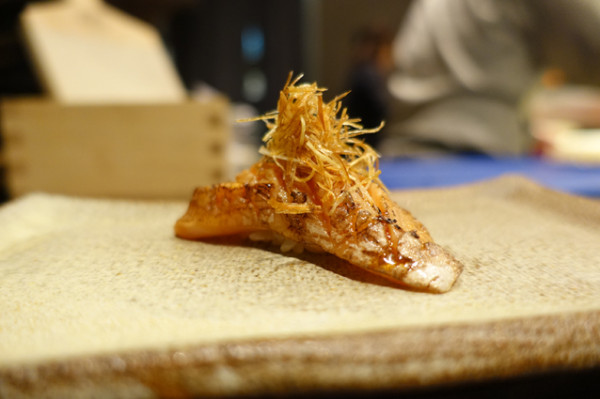 Seared salmon topped with a pinch of fried leeks is the restaurant signature, but I’m sadly too full to really appreciate it. I will say the combination is clever - Matsuya-san explained: “I tried lots of stuff, leek was the best.” 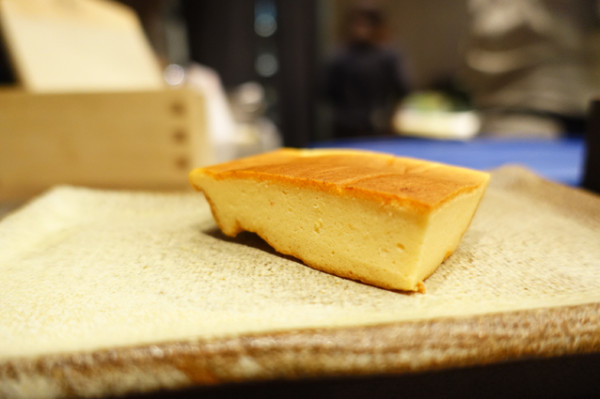 The sweetness in the final piece of golden-baked tamagoyaki (egg sushi) might remind you of Uncle Tetsu’s, but it’s an infinitely more classy way to put your palate back together after this generously proportioned, high-quality sushi feast. If you're a sushi-lover, it is definitely worth a visit.