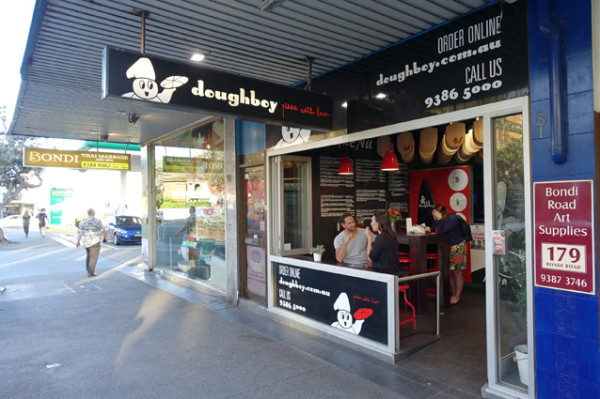 My first experience with Doughboy was nearly a decade ago, when this small group of pizza-lovers opened their Newtown store. While that outlet bit the dust, today you’ll still find this boutique pizza group, which began back in 2001, operating five different stores. 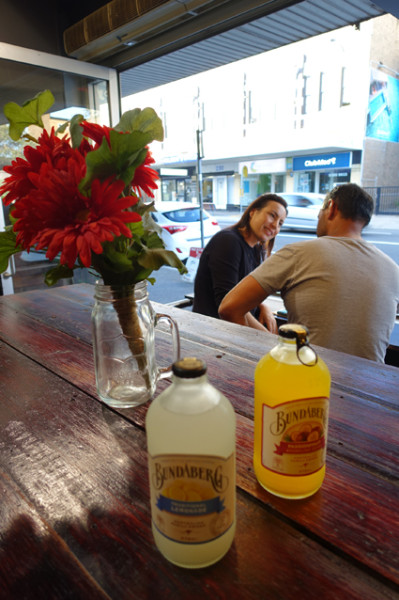 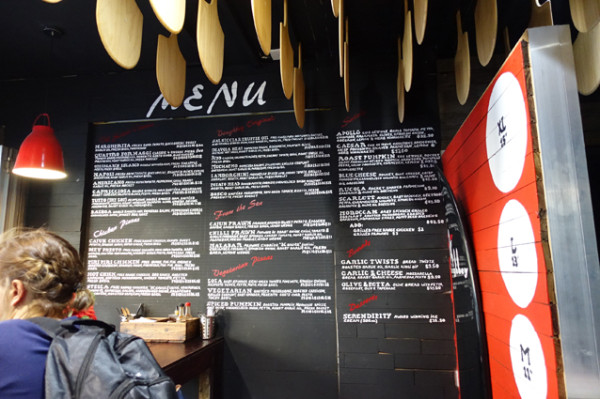 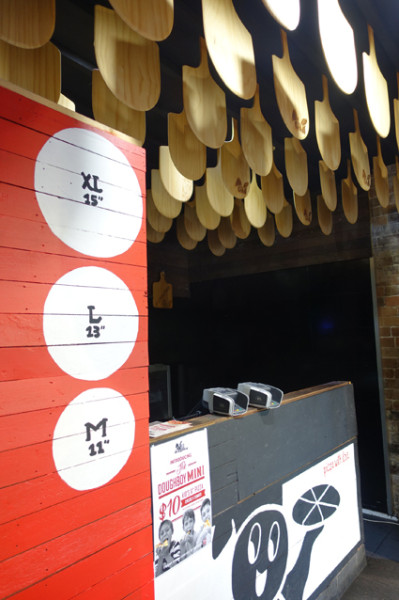 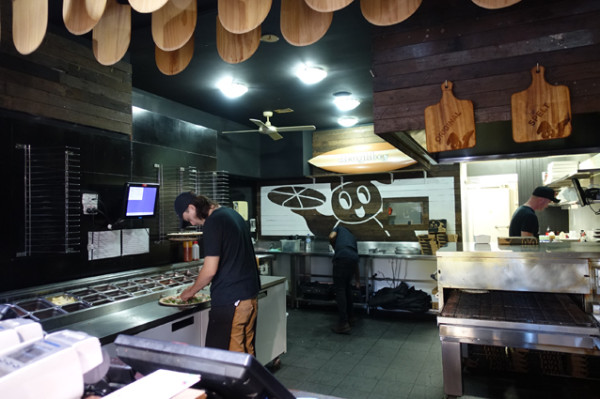 It’s a small but quirky space, with a ceiling full of hanging wooden pizza paddles, a logoed surfboard on a red feature wall, and a giant chalkboard menu taking up most of the remaining space. By necessity it’s predominately a take-away outlet, but there is a communal table and some counter seats where you can eat pizza and watch the world go by. 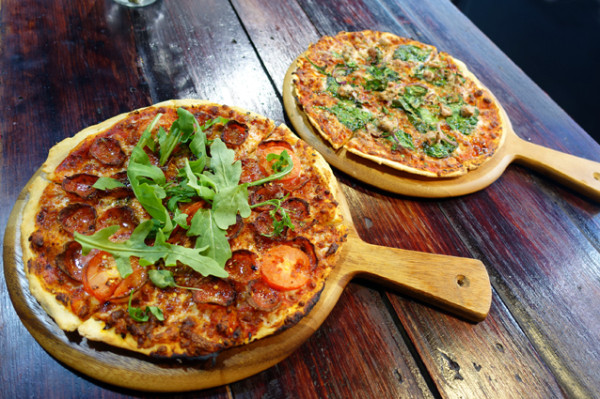 Over pizza we had a conversation about the changes Tom has seen at Doughboy across the years. I was particularly interested in how menu updates happen. “We do it as a group,” Tom explained, adding that vegan pizzas are the latest Doughboy initiative. He’s excited about them because they open up "a new market, because vegans won’t have ordered from Doughboy before.” 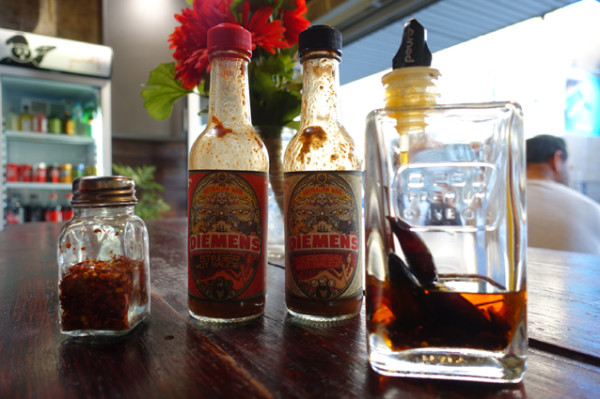 The process of change at Doughboy still sounds pretty organic: one of the benefits of the restaurant group staying small. “A guy walked past when we were having a meeting one day, and he said: ‘You guys want to try our hot sauce?’” retold Tom. You'll find that same Diemen’s hot sauce on the menu on the Diavola Heat pizza, and sitting on the communal table for you to enjoy. 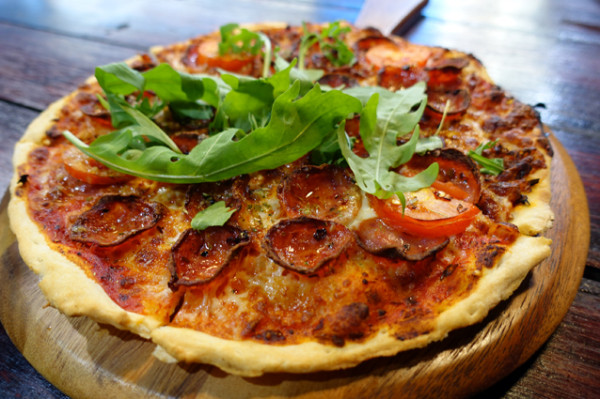 I give it a whirl on a classic Americano ($18/M) that arrives on a super-thin, crisp base with charred rounds of pepperoni, juicy Roma tomatoes, chilli, garlic oil, and a handful of fresh rocket. It’s an exceptional chilli sauce that uses Tasmanian wild pepper leaves to give it a rainforest feel against habaneros (for considerable kick). On the pizza, the fresh Roma tomatoes speak to the group’s commitment to quality produce. 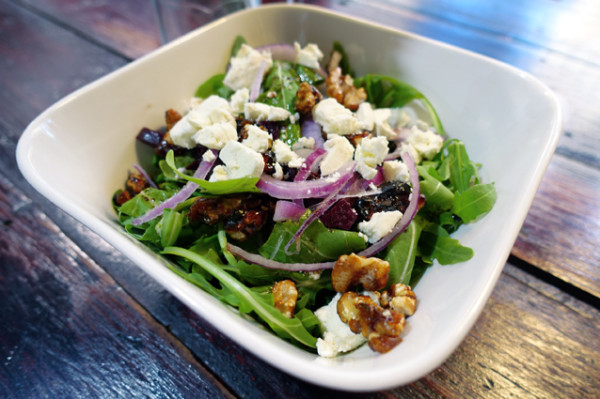 The candied walnuts in the Scarlett ($12.50) salad are another exemplar of freshly made, high quality ingredients. “Phil, a local guy, does that for us,” explains Tom. Phil also trots out salad dressings and the '3C' chilli, coriander and coconut sauce on the Stella pizza. In the salad the crunchy-sweet walnuts are pitted against rocket, baby spinach, beetroot, feta and Spanish onion, against a simple balsamic and olive oil dressing. It’s way better than your average pizza shop salad. 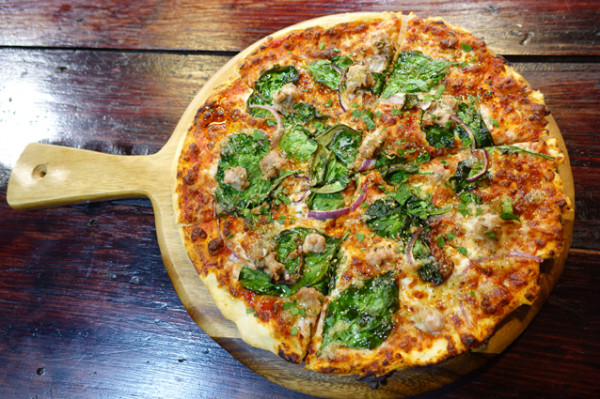 I’m even more taken with Salsiccia & Truffle Oil ($18/M) from their signature pizza range. Once again there’s 'a local guy’ involved – the butcher up the road – providing the excellent free range pork and fennel sausages. Nuggets of lean sausage are dotted across another lovely thin base with baby spinach, Spanish onion, roast garlic oil, truffle oil and fresh parsley.

With a shared salad, a medium pizza apiece is all you need to walk away satisfied without feeling bloated – another thing that sets the Doughboy apart from other pizza groups.