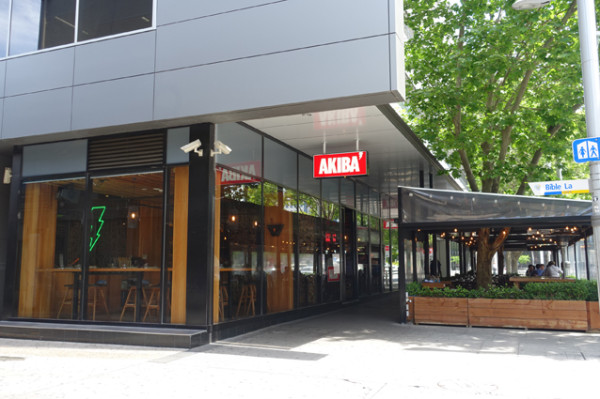 Akiba sits on Bunda Street, Canberra’s main shopping strip. It presents youthful, contemporary pan-Asian dishes, from a raw bar, barbeque and dim sum kitchen. It reminds me a bit of Manly’s Daniel San, though I’d argue the dishes here are slightly better. Akiba also wins on the friendliness of their floor team, who take the time to make friends, as well as serve. 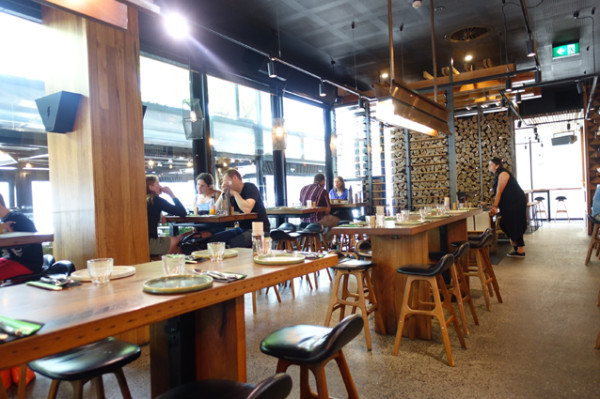 We’re seated on comfortable stools at the raw bar. With a large function coming in at dinnertime, the chef is rapidly breaking down whole fishes. It’s clearly a space and menu designed around doing volume, which makes me suspect it isn’t the owner's first restaurant. My inquiries uncover that the Harrington brothers, Peter and Michael, own Akiba. They’re second-generation restaurateurs with Sage and Kokomo (a neighbouring 600-capacity Canberra hotspot) also under their wings. 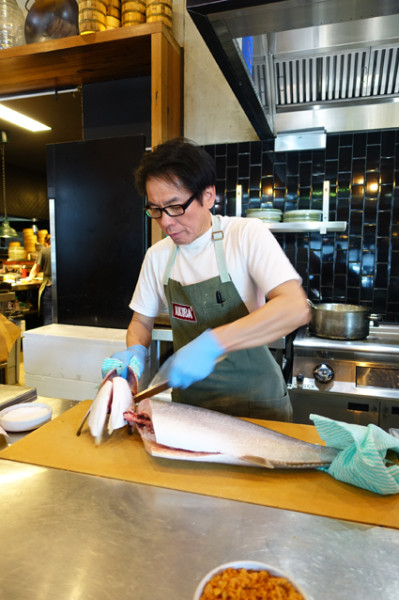 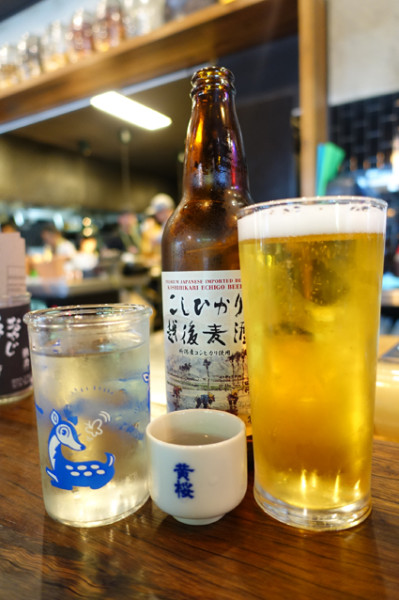 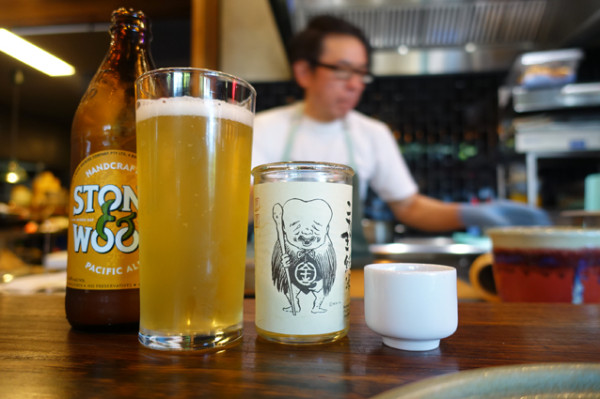 To avoid FOMO (fear of missing out) we create a second boilermaker ourselves by teaming Stone & Wood Pacific Ale ($13/500ml) with a Chiyo Musubi Konaki Junmai Cho Karakuchi Cup ($28/180ml). It’s a slightly better sake with flavours that summon oak and yeast. It has a cool graphic on it of Konaki Jijii, an old man who is said to attack enemies by clinging onto them and turning to stone, in order to weigh them down and crush them. 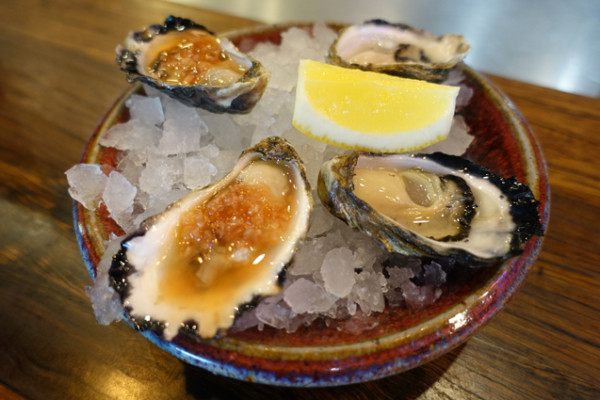 Sitting at the raw bar, it's hard not to weigh down your meal with the offerings that are prepared right before your eyes. We start with Oysters ($12/4) taking two natural, so we could taste them, and risking the house's ume mignonette with the second pair. I needn't have worried - the clever dressing left a nice hole to actually let the oyster speak. 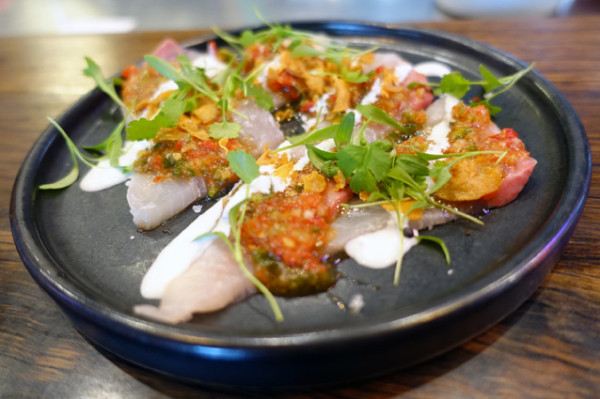 Watching the chef break down a gleaming kingfish made the Kingfish ($14) a must-order. The flesh is supple and flavoursome, against a wild and generously applied combination of creamy coconut, nam jim, fresh coriander and crunchy garlic chips. The house-made nam jim is spicy, sour and salty, from a combination of red and green chillies, lime, coriander, fish sauce, garlic and eschallots. Despite its big flavour, there's still space in the combination to taste the beautiful fish. 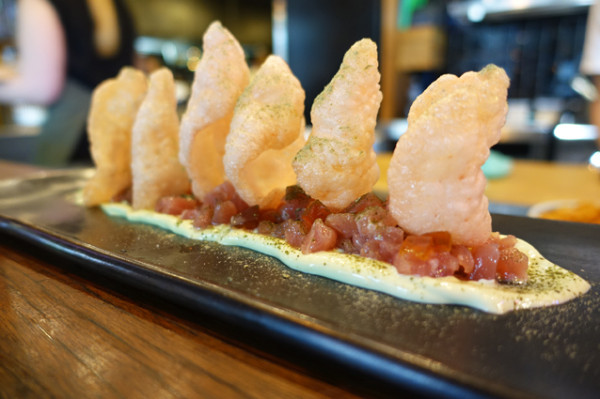 Ordering nearly all the dishes from a single section of the menu is a risky strategy, however Akiba have cleverly made sure each raw dish is different in terms of flavour and texture. Adorned with eye-catching prawn chip sails, pale pink Tuna Tartare ($16) floats on a raft of jalapeno mayonnaise. It's flavoured with ponzu ginger and dusted in nori salt, and you eat it by scooping the tuna and mayo. onto the chips. Be generous, there's a deceptively large amount of it to fit on six chips. 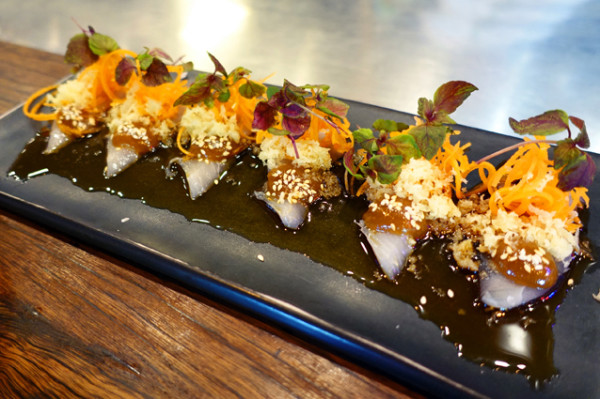 We end with Hapuka ($15). Adorned with carrot and fresh herbs, the curls of white fish are painted with wasabi miso, sprinkled with sesame seeds and tempura flakes, then dragged through muddy lake of shoyu. It’s my least favourite of the raw dishes we tried because it's so big on soy, it loses the fish. 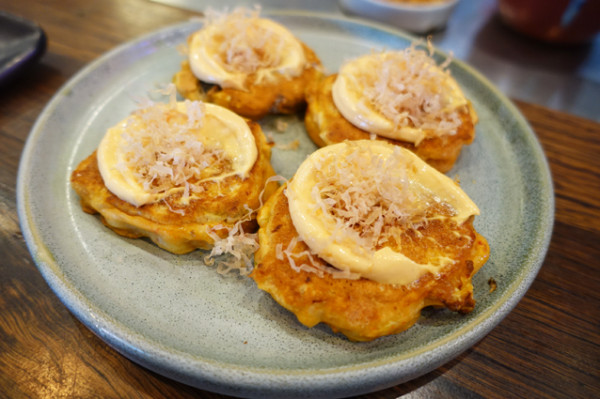 Four Kimchi and Angasi Pancakes ($10) round out our corners. The tasty oyster and kimchi pancakes are moistened with a smear of sriracha-spiked Kewpie mayo. and topped with writhing itogaki. The latter is salted and dried blue fin tuna, used because it has a milder flavour than bonito. They’re simple but clever enough that they have me planning to try out my own version at home.