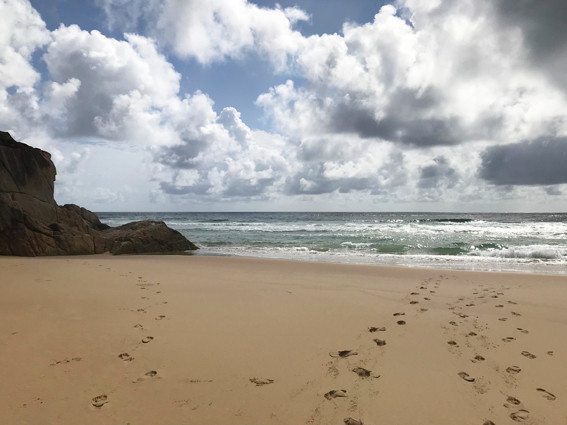 South West Rocks is a sleepy, mostly unrenovated coastal town. It’s been saved from too much tourism and attention by sitting five hours drive from Sydney - just out of reach for your average weekender. It’s also a good twenty-five kilometres off the Pacific Highway, through lush green farmland and the town of Clybucca, made infamous by a terrible tourist bus crash back in 1989. 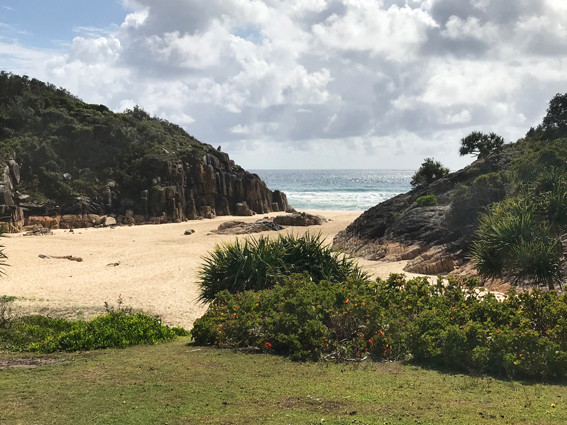 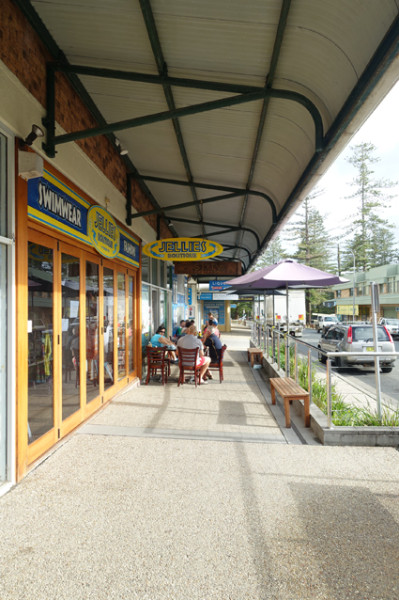 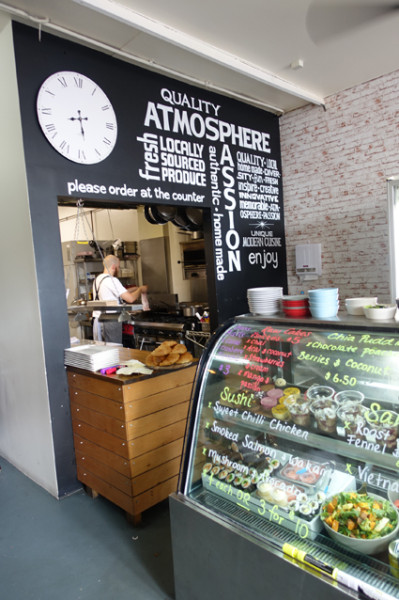 To fuel up before a full day of exploring, head to where the locals hang, at Sixty Degrees. Opening their converted Little Golden Book menu will show you that Sixty Degrees is popular for a reason. 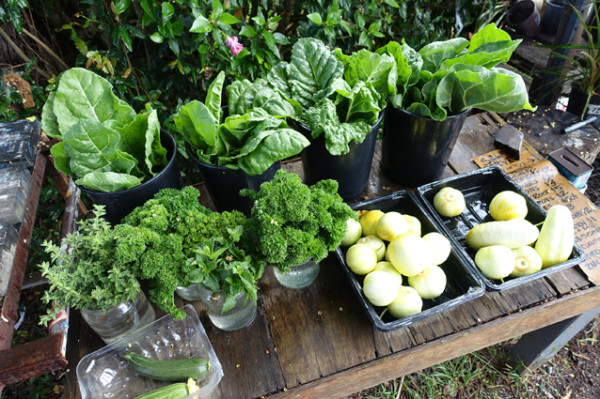 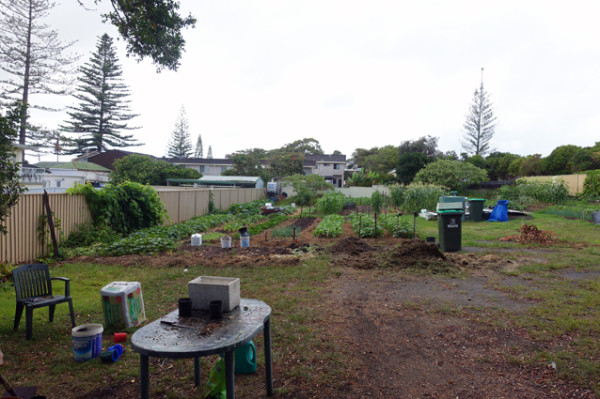 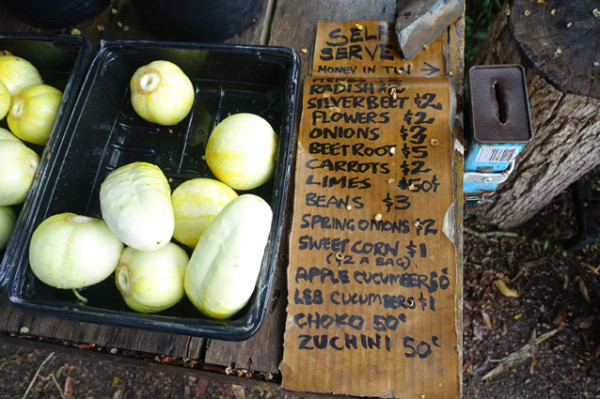 We took home some lovely apple cucumbers from their table, paying fifty cents apiece into a rusty little honesty box. 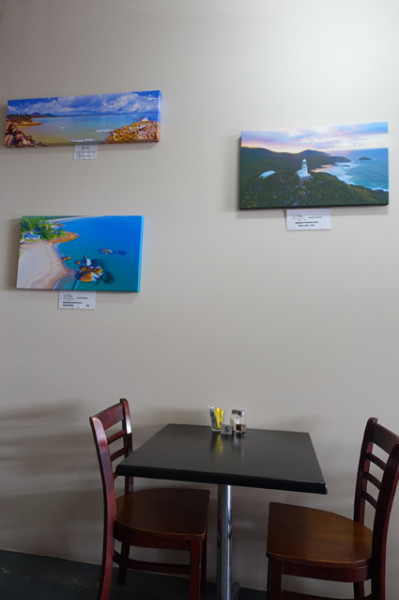 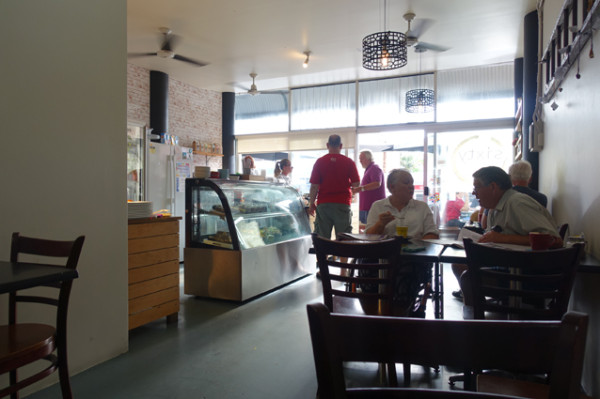 With the walls decorated with work from local artists, the café is dominated by a large glass counter where you’ll find everything from chia pudding to sushi. 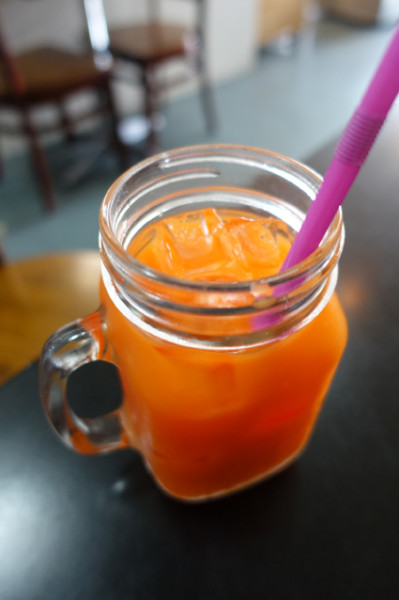 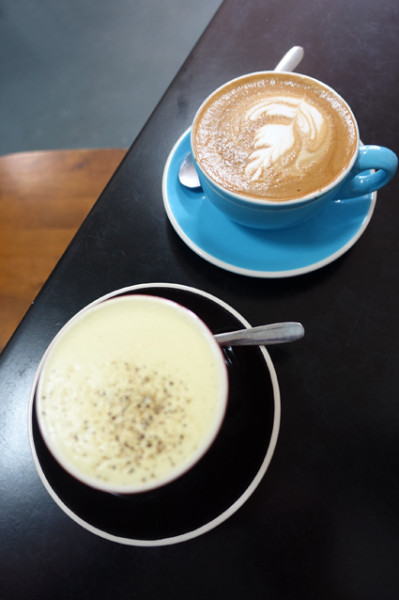 Freshly squeezed juice is a highlight; Bondi ($5.50) is a well-balanced, compelling blend of orange, carrot and ginger. Holy Goat Coffee from Port Macquarie scrubs up well in a Flat White ($3.80) with good bitterness when you amp it up with an Extra Shot ($0.50). The only weak point (literally) was a Golden Latte ($4.30), which needed a bit more turmeric to achieve the promised colour and correct flavour. 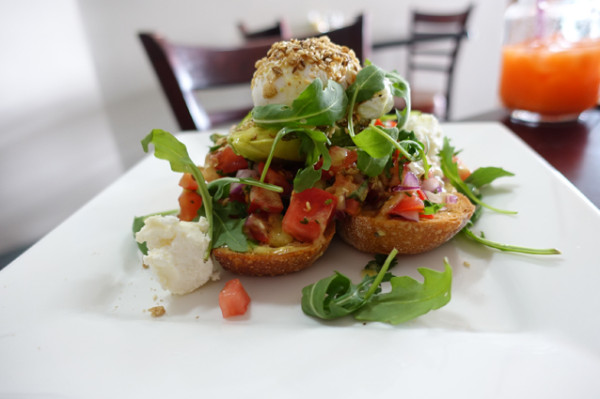 With produce being such a focus, Bernard’s Breakfast Bruschetta ($17) is a must-try. The dish is named for Bernard Salt, the out-of-touch Australian columnist who glibly told millennials that their consumption of smashed avocado was the reason they’ll never own a house. Here the avocado is nicely sliced rather than smashed, and teamed with fresh basil, local tomatoes, chalky Persian fetta, dukkah, and poached Yamstick eggs, which are certified organic. The salad is nicely dressed with turmeric and apple cider vinegar; and the whole lot is arranged on top of two slices of spelt sourdough. 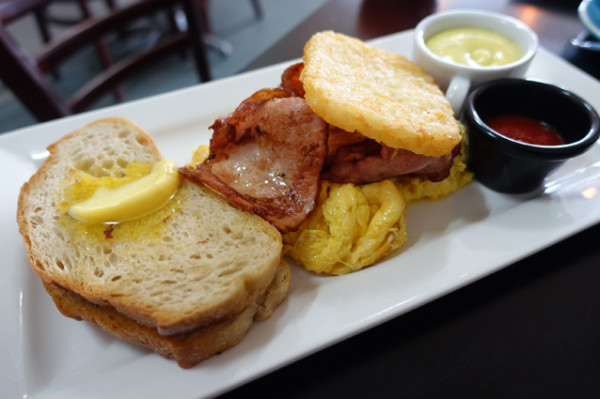 You can also construct your own breakfast, starting with two golden Scrambled Yamstick Eggs ($5) and good Bacon ($5) on Spelt Sourdough ($4/2 slices). My condiment-mad dining companion also opted for Béarnaise ($2), Tomato Chutney ($2) and a Hash Brown ($2), meaning we’ll definitely never own a house. In this breakfast the bread is the only weak point, but I'm very particular about sourdough needing sourness.

This breakfast was perfect fuel for a long day at the beach. 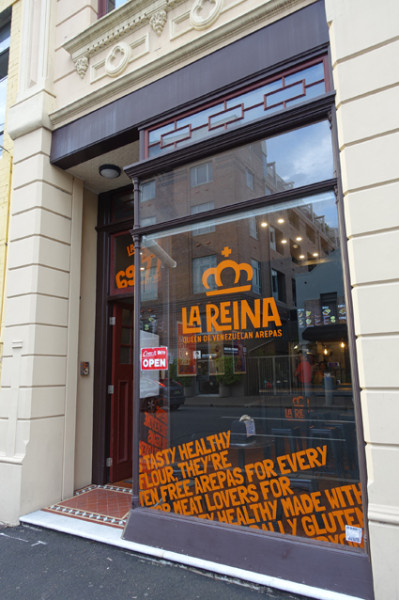 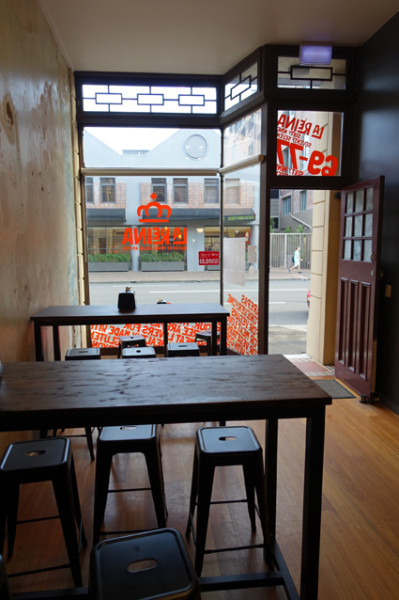 Arepas are what Venezuelans eat where you might eat a sandwich or toast. Ybrahim Camero has been trying to popularise these white corn tortillas here in Australia, starting with a market stall at Glebe Markets. The crunchy-edged pancakes proved a hit. On his first day at Glebe Markets, Camero thought he’d sell ninety arepas. He brought one hundred, but managed to sell one hundred and forty! Over the past year and a half of doing market stalls and festivals, Camero has learned a lot about how Australians like to eat.  He has brought that knowledge to bear in his first bricks and mortar store, La Reina: Queen of Venezuelan Arepas, located in a heritage-listed building at the City Road end of King Street, Newtown. 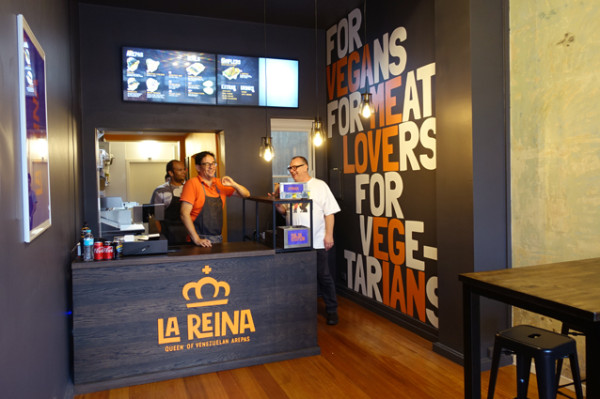 “Normally an arepa is white. We designed the arepitas to look bright and colourful, like an Australian BBQ,” said Camero. 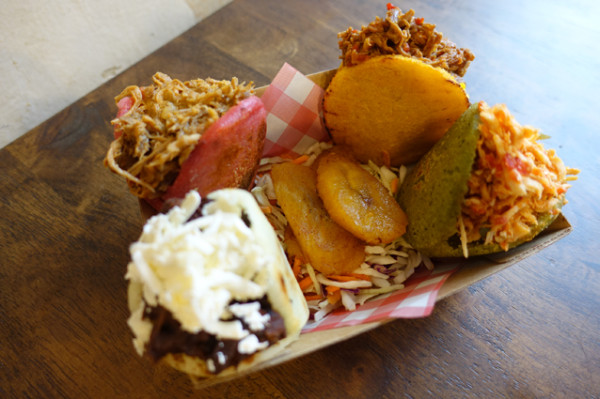 While keeping the heart of the Venezuelan dish, Camero has added beetroot juice, carrot juice, and kale and coriander to make brightly coloured arepitas for his Sampler Pack ($15/4). Arepitas are smaller arepas, like sliders, and this sampler pack is great if you’re feeling indecisive about which filling to choose. 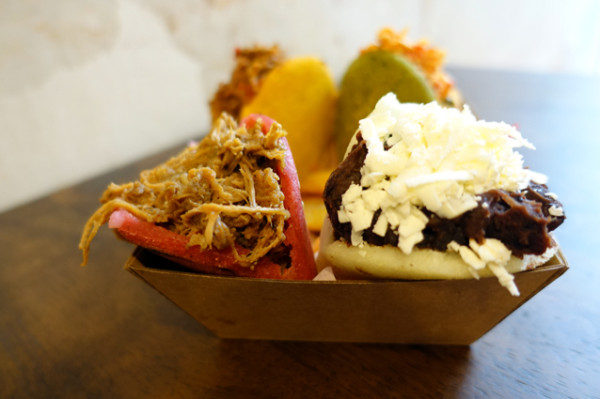 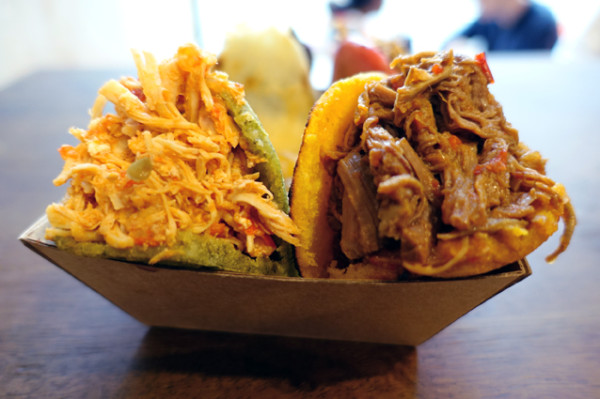 It includes a plain white arepa with creamy black beans and white salty cheese, and a juicy chicken in a green coloured arepa with kale and coriander. The carrot coloured arepa is filled with slow-cooked shredded beef, made to Camero's Mother’s recipe. My favourite is the earthy pink beetroot arepa stuffed with pulled pork. With a touch of sweetness the pulled pork goes down best with the on-table capsicum sauce, interspersed with bites of sweet fried plantain. You’ll also find coleslaw for crunch, though be warned, it has been deliberately left undressed so it doesn’t compete with the dish’s subtle flavours. 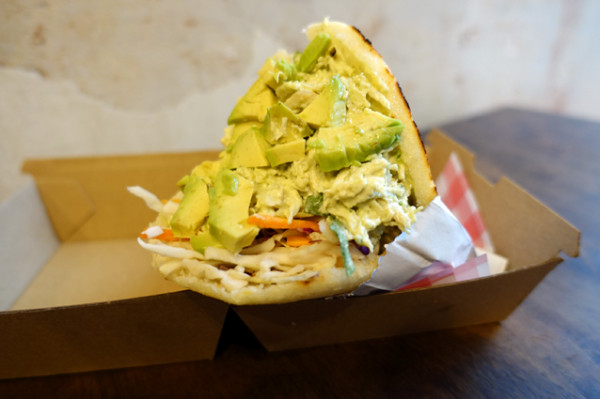 We also try the Reina Pepiada ($13.50). This “curvy queen” arepa was made in honour of Venezuelan beauty, Susana Dujim, who won the Miss World competition in 1955, making her the first South American to do so. It’s basically a cold salad arepa, with shredded chicken, avocado and ‘slaw. It's here I really started to miss hot sauce, as neither the mild capsicum sauce, nor the green 'guasacaca' stopped this from being bland. Camero is quick to explain why nothing is spicy: “Venezuelans don’t eat chilli - we have a sweet chilli but we can’t get it here. We’re not chilli eaters, I learned to eat chilli here.” 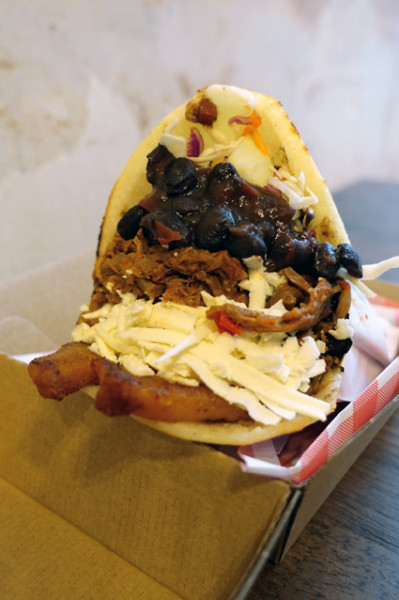 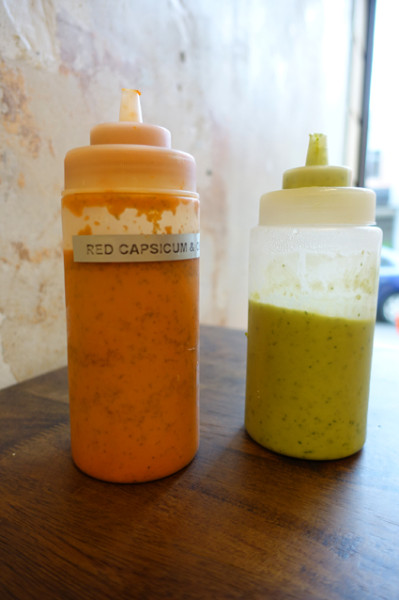 This probably explains why the Pabellon ($13.50) is Venezuela’s national dish. It's meant to represent all the races that inhabit Venezuala, from black beans representing Africans, to the salty white cheese representing Spaniards, and the indigenous peoples represented by plantain and shredded beef. It’s a tasty mouthful, and easily the best thing I tried at La Reina. 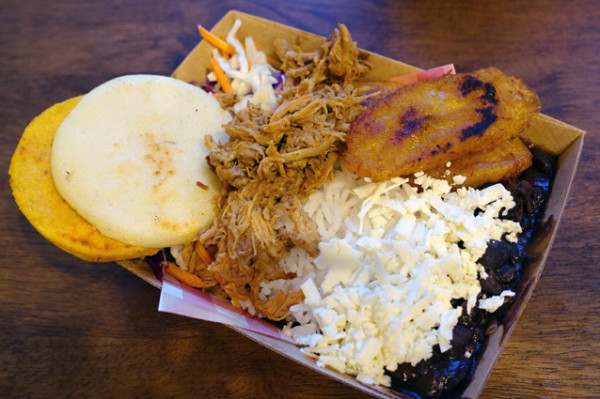 Due to us Aussies being a bit precious, and baulking at eating arepas in the hand-to-mouth way they're meant to be eaten, Camero also presents the same ingredients in a Pabellon Bowl ($14.50). What I liked about the bowl (beyond it not dripping down my arms) was that I got to taste plain white arepas by themselves, and really enjoy the cornmeal flavour. I can see why this bowl is La Reina’s best seller (along with the colourful slider-style arepitas) at their market stalls, but there's something to be said for eating a dish the way it was actually intended... well except for adding hot sauce.


Thanks to the Australian Good Food Guide for arranging this visit.