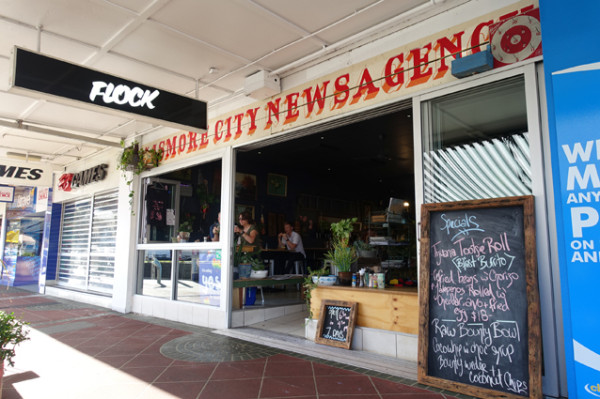 At the outset, Flock Espresso & Eats, didn’t look like my sort of café. My first thought was that it was too large to achieve the level of speed and efficiency I like in the morning. 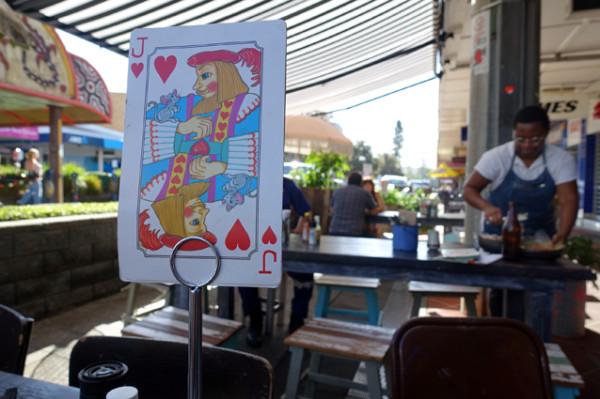 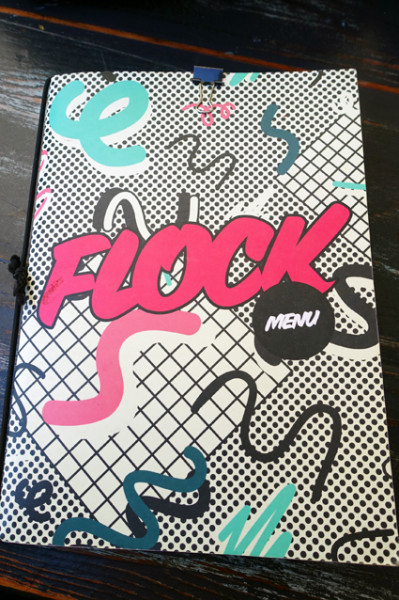 It also had lots of hipster trappings, from playing card table numbers, to an interior cluttered with eclectic collections, like bad paintings of swans. 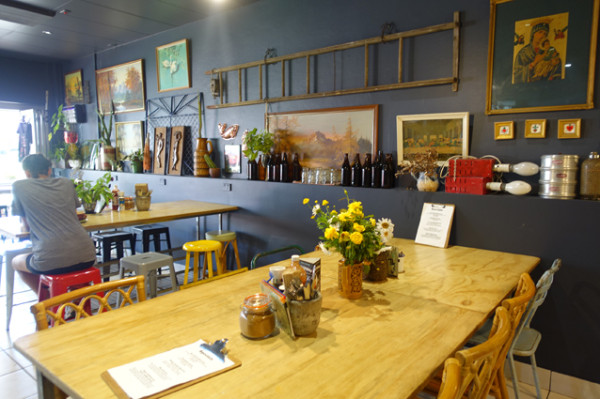 The menu had the usual hipster signifiers – bounty bowls, turmeric lattes and some modern Mexicana – which I decided to avoid in favour of the menu cheapie: Bacon and Egg Special ($12). 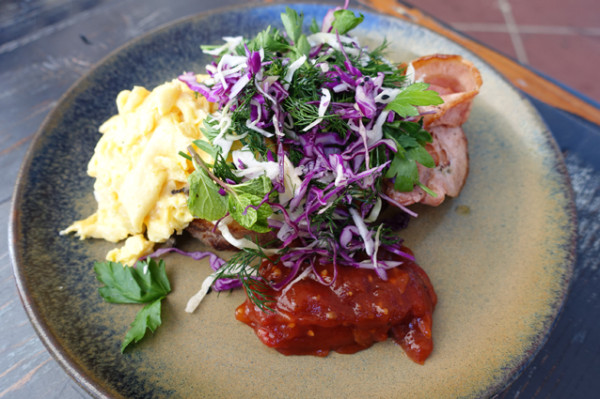 Here’s where I start to eat my words... The resulting plate of scrambled eggs and smoky local bacon arrived fast, looking abundant under a terrific fresh salad of red cabbage and fresh herbs including dill and mint. It was accompanied by an equally impressive tomato relish, and sourdough toast from current Byron Bay trendsetter, The Bread Social at The Farm. To my palate the bread isn’t quite sour enough, but having eaten sourdough for the last twenty years, my sourdough standards are fairly exacting. Overall this breakfast was a pleasure to eat, and I found myself scraping up every last skerrick. 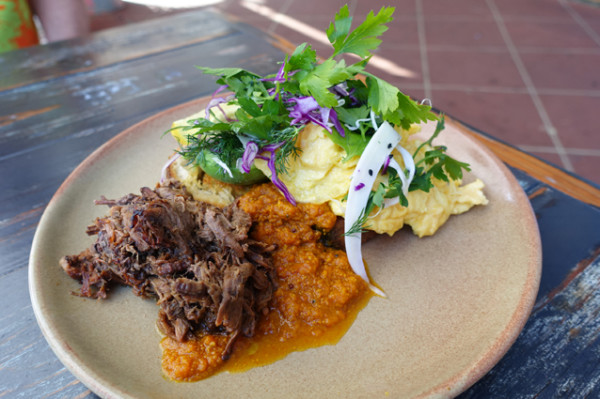 My dining companion tackled Scram Sam ($13) a generous plate of scrambled eggs topped sourdough, avocado, haloumi and vibrant greens, which he chose to complement with a side of Slow Cooked Pulled Beef ($5). I’m not sure what it is about the Northern Rivers region, but they seem to have a better handle on pulled meats than Sydney restaurants. This pulled beef was very well handled (as was the pulled pork I ate at Shelter). The eggplant kasundi was also a star – prompting me to ask friendly staff if they sold jars of either of the condiments we consumed (sadly, no). 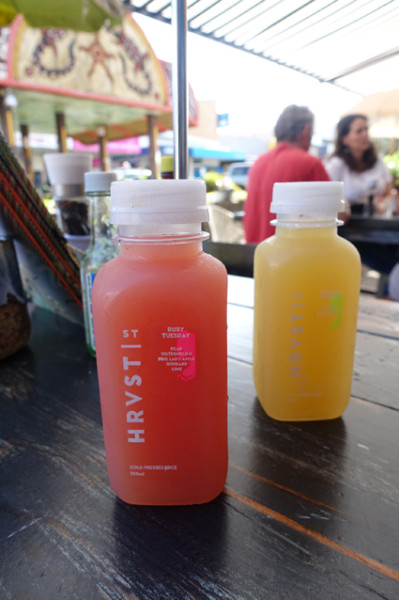 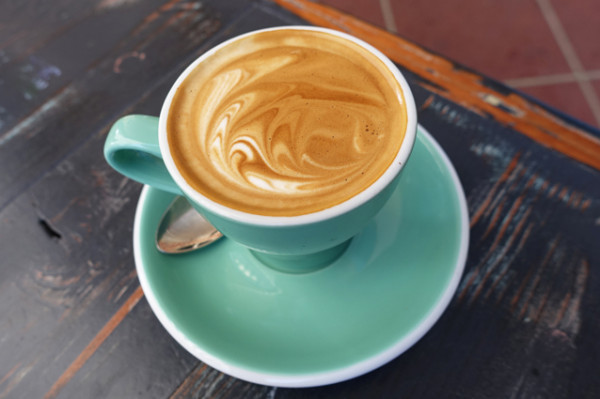 We washed down our meal with Hrvst St. cold pressed juices, which come in an interesting range of flavours. I went sweet with Ruby Tuesday ($7) combining pear, watermelon, pink lady apple, rhubarb and lime, while my dining companion opted for a sharper Endless Summer ($7) of lemon, pineapple and cayene pepper. The coffee is by Sydney roaster, Allpress Espresso, and scrubbed up okay in a strong Flat White ($3.50).

After running into bubbly owner Kym Strow on the floor, I was intrigued about the Flock back-story. The café began about five years earlier in a small space in the adjacent arcade. The huge March 31 flood that devastated Lismore was the catalyst for moving into this new space, which is about four times the size. At the old café Kym was in the kitchen, though the sheer size of this enterprise necessitated in her hiring some chefs, and consequently now spending more time with customers on the floor. 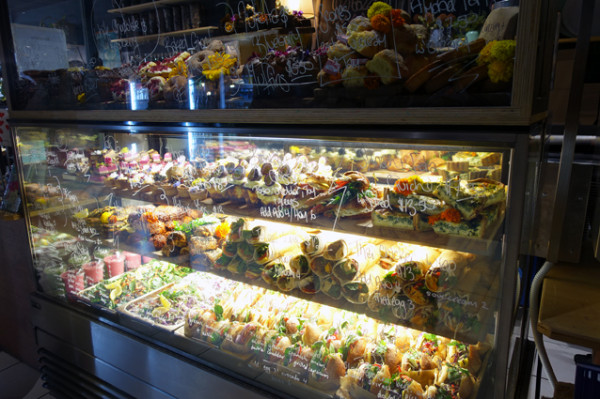 If you look beyond the hipster elements, like succulents, you’ll also find one of the best looking glass counters of food I’ve seen in a café (my photo doesn’t do it justice).  Standing shoulder-to-shoulder with the local Ambos, I took in the vibrant and abundant array of takeaway options. 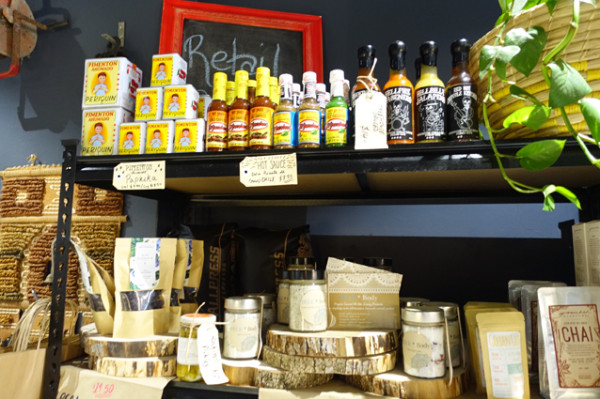 You’ll even find a shelf full of takeaway products, including Byron Bay chilli sauces, chai and dried blueberries. While you might find better prices for these items elsewhere, it’s hard to deny some profit to a café that is so obviously a vibrant community hub for the people of Lismore.