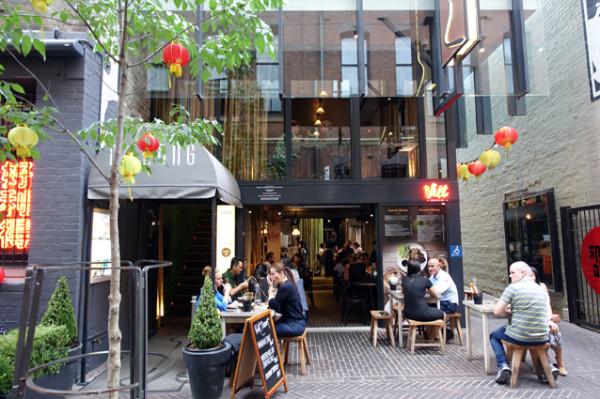 In this job, with the hunt for something new to write about, you don’t get the opportunity to return to restaurants you enjoyed all that often. 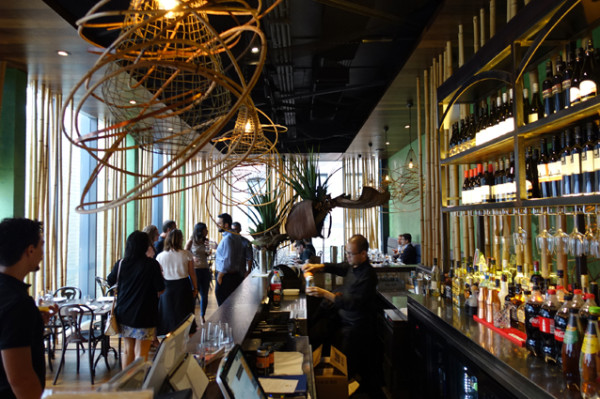 It was thus with great pleasure that I accepted an invitation to revisit Mekong on Kensington Street to road test one of their Craft Beer and Curry Series dinners. 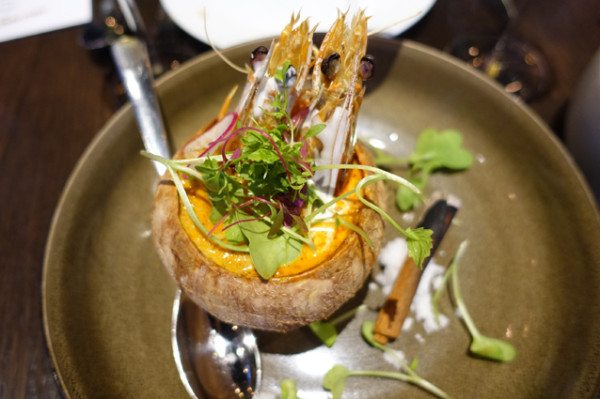 I had a great meal at this restaurant when it first opened, and was delighted to find my favourite dish, once called ‘Full Moon’ is still on the menu as Seafood Amok ($35). Served in an eyecatching coconut shell, this thick, creamy, coconut-based prawn curry flavoured with Thai basil is still a firm favourite. 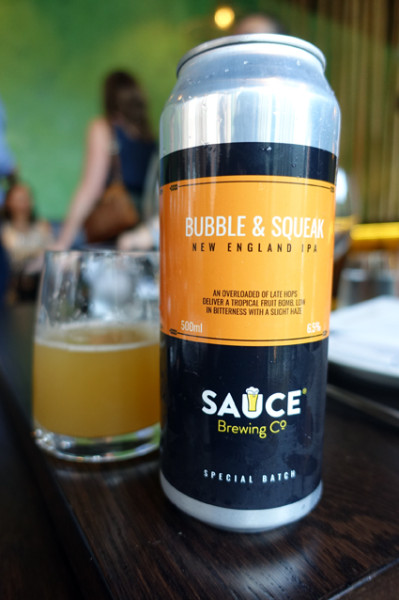 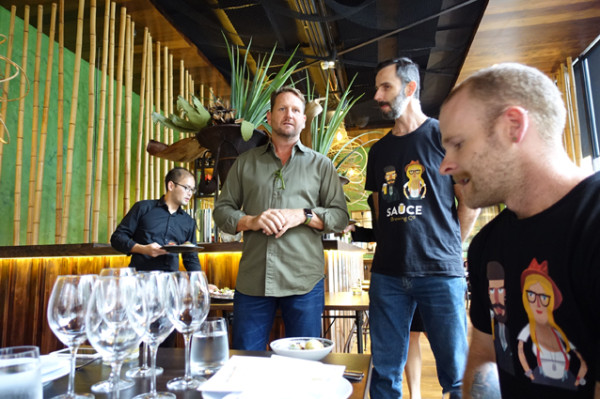 The purpose of this series of monthly dinners is to highlight the effectiveness of beer as a match to curry. For $95 you get to experience five shared courses paired with five different beers. Without being overloaded with talking, these dinners give you a bit of an insight into craft brewing. I got to meet the crew from Marrickville newcomer, Sauce Brewing Co. and was pretty impressed with their range, which started with the Bubble & Squeak NEIPA (6.5%). This lightly cloudy New England style IPA uses late hops, so it’s got a fruity, flowery flavour that for me descends into honey. 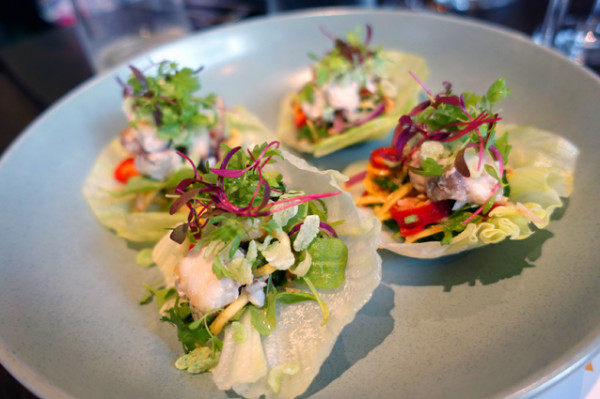 With low bitterness and a lovely nose, it’s very easy to enjoy, particularly against the Smoked Fish Salad ($28), which Chef Tiw Rakarin has chosen to serve up in lettuce boats as canapés. It’s a great dish with mango, crisp young green rice, and a decent kick of chilli. 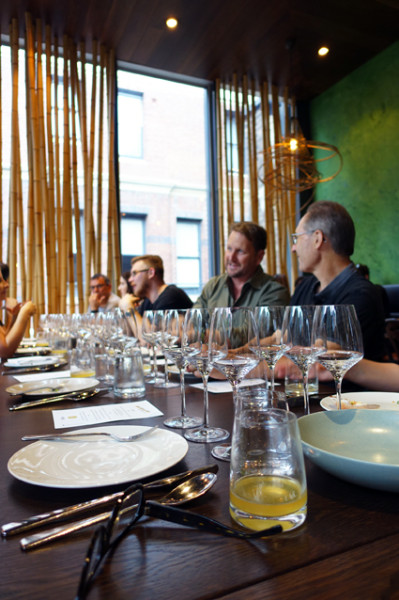 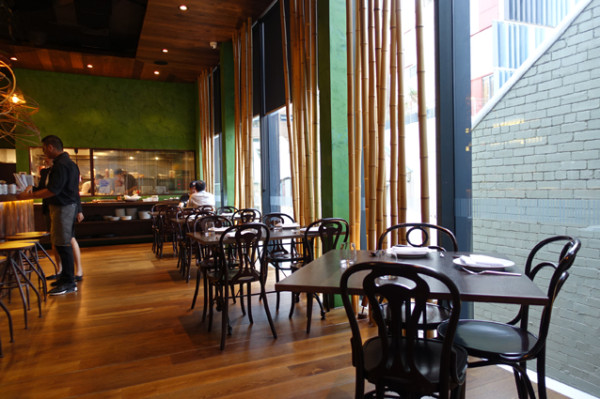 While the Sauce Brewing Co. team, led by Mike Clarke, have been gypsy brewers for over eighteen months, they finally got permanent digs just over four months ago. This takes Marrickville up to an impressive dozen craft breweries, making the suburb well worth a craft beer crawl. At Sauce Brewing Co. the guys tell me you’ll always find something in the taproom that you can’t get anywhere else, so it’s worth dropping into the warehouse to try their special batch beers. 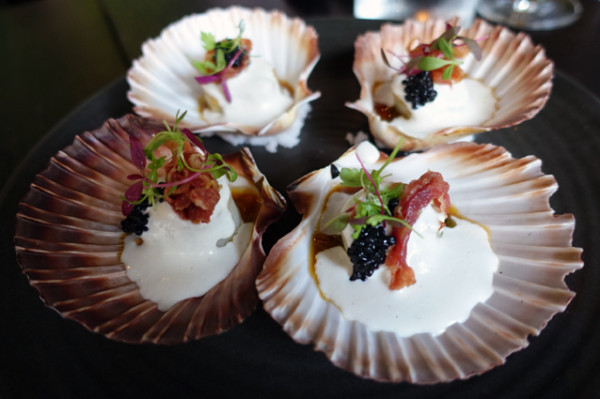 All this beer talk conjures up a powerful thirst, so I’m glad when – after we throw down some Grilled Scallops with Fresh Coconut ($14/2) – we’re quickly triple parked with three more beers. 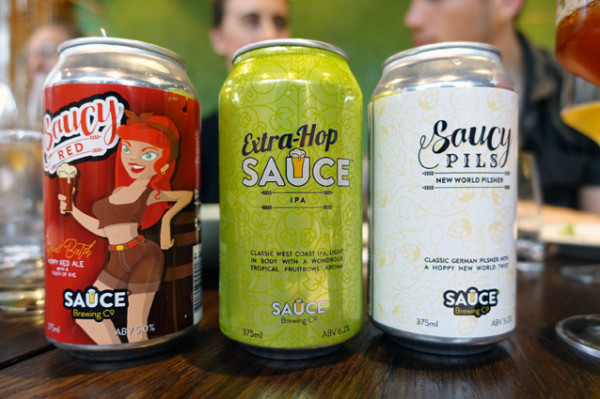 The Saucy Pils (5.0%) is an instantly likeable German-style pilsner made on New Zealand hops. 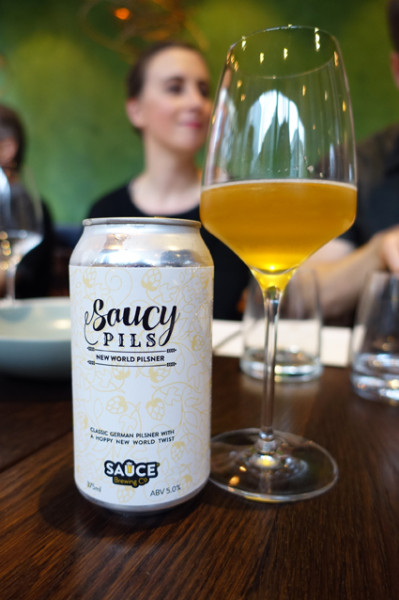 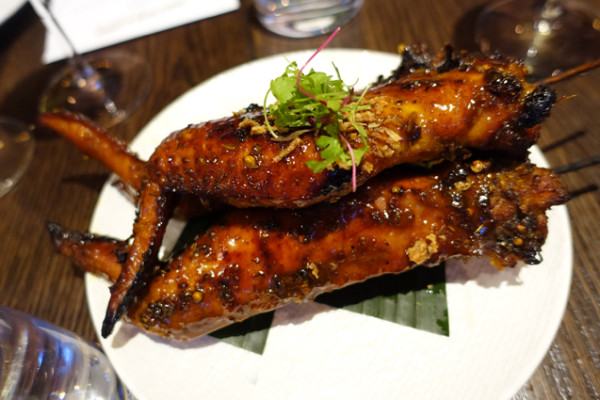 It’s crisp with fresh lime, and a bit of a bready end, and easily sessionable. It goes well with BBQ Turmeric and Lemongrass Chicken ($26) presented for this dinner as giant (and somewhat unwieldy) skewered wings. 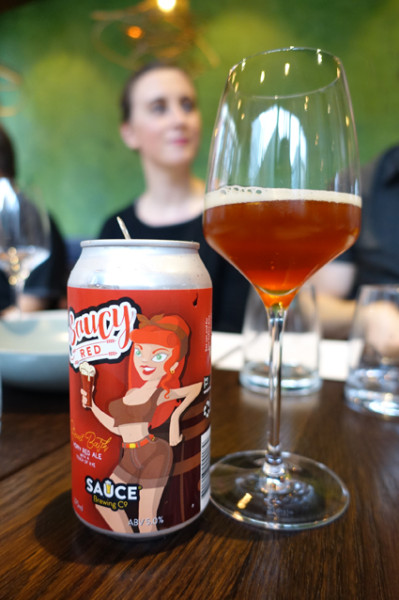 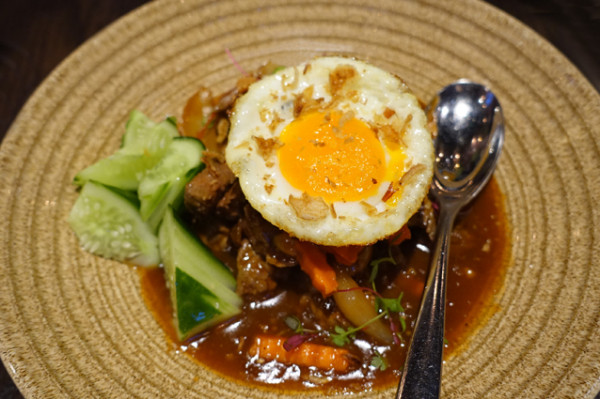 The red ale - Saucy Red (5.0%) – is the first red ale I’ve enjoyed. It’s got spice, rye and caramel notes with a bit of fruit. It really comes into its own when you start eating curry, including the seafood amok I mentioned earlier. We also enjoy it against an off-menu Cambodian beef lok lak stir-fry, with onion and a fried egg. 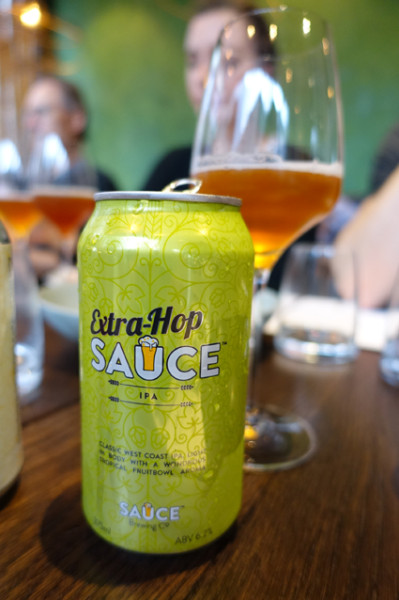 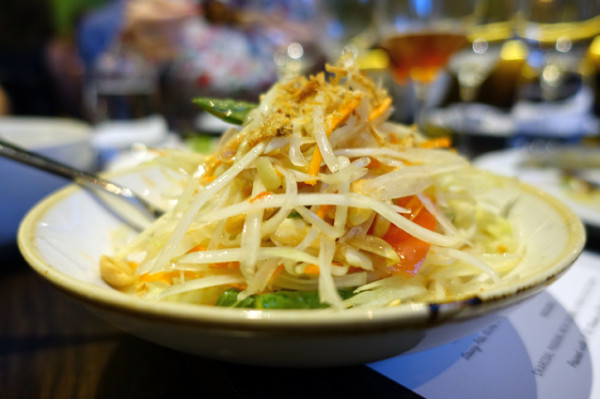 My least favourite of the beers was the Extra-Hop Sauce (6.2%), a West Coast IPA that was canned just two days before our dinner. It’s a bit on the malty side for me, and didn’t respond overly well to the dishes we were eating. What I liked about this dinner was how regularly my beers were topped up, so I could be sure. 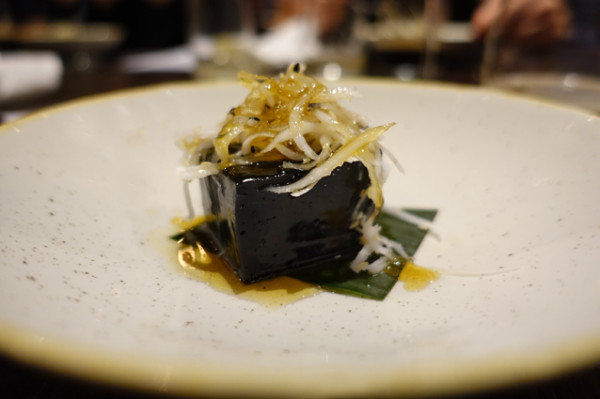 We ended the dinner having made firm friends with our tablemates over a super-sweet charcoal pudding with sesame and sliced coconut. It was paired with 50 Shades of Black (5.7%) a stout with lots of malt and coffee notes. 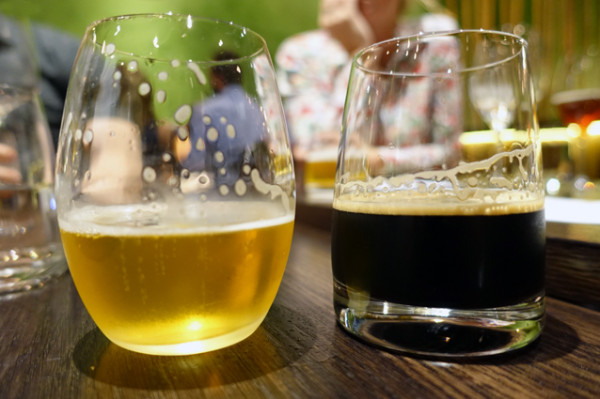 I’d hit up another of these dinners in a heartbeat because the food is great, and the atmosphere is lighthearted rather educational or stuffy. I also liked that we didn’t leave the table hungry or thirsty. The only missing factor was a bit more communication from floor staff on how dishes were to be shared. Despite pacing being off in places - the small kitchen was definitely under the pump - the quality of every dish I tried remained high.

The three upcoming Craft Beer and Curry Series dinners will be in collaboration with Lord Nelson, Willie the Boatman and 4 Pines. They will be held on 22 March, 24 May and 21 June, so book in fast to meet your preferred craft brewer: https://tickets.myguestlist.com.au/v25a57f7992ba51/craft-beer-curry-part-2-brew-tiw/

Note: See my initial review of Mekong back HERE.