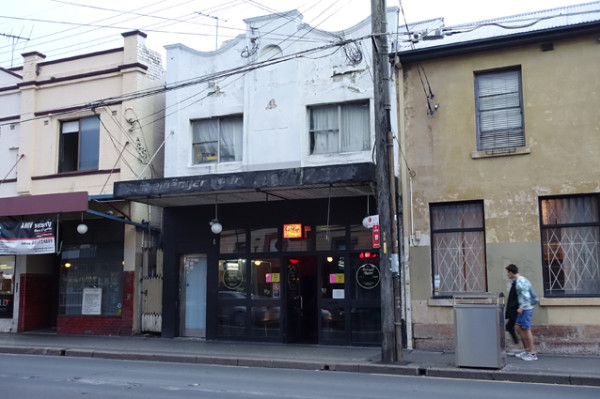 The Midnight Special is a genuine dive bar. The décor’s terrible; but the shots are easy to drink and it’s dark enough not to jar you into realising how bad you’re going to feel the next day. It’s the kind of bar where, under fairy lights and the red glow of low-hanging lanterns, people actually talk to strangers. 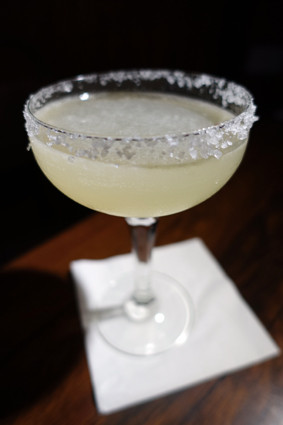 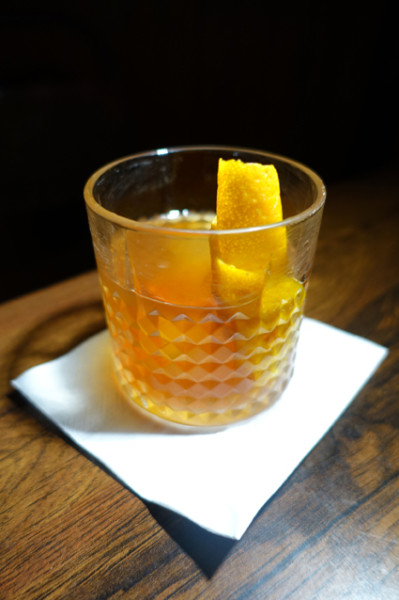 We slide into the relaxed pace of the space with a Smoke on the Water Margarita ($19). Made using house-made smoked jalapeño tequila, it’s well balanced with a deep, smoky back palate, and an excellent way to kick off your evening. 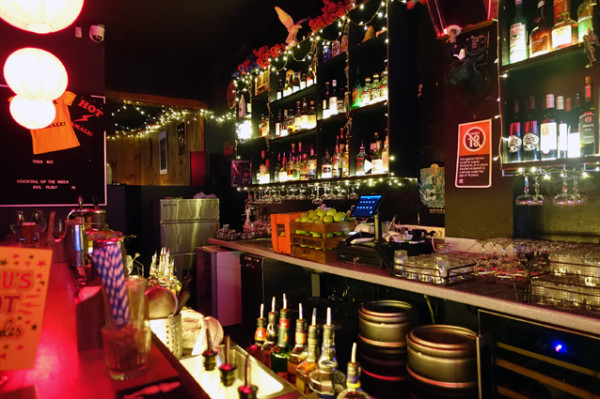 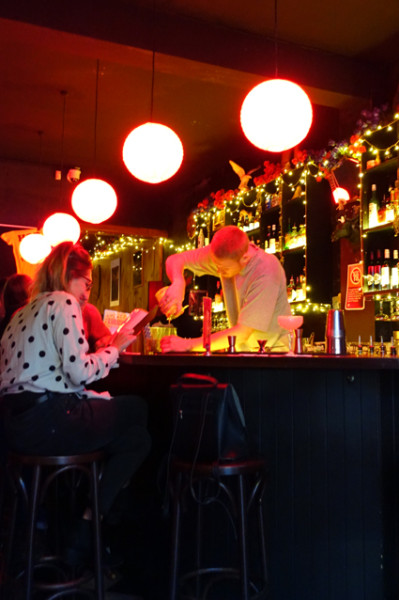 We’re actually here for Lulu’s Hot Tamales. It's a four-week pop up that runs every Wednesday through Sunday until April 15. The woman behind the pans is Monica Luppi, an Italian who was raised in the United States. Monica has been making tamales for friends for years, but only started selling them during the last twelve months. She's popped up at popular craft breweries like Young Henry’s and The Grifter, as well as here at The Midnight Special. 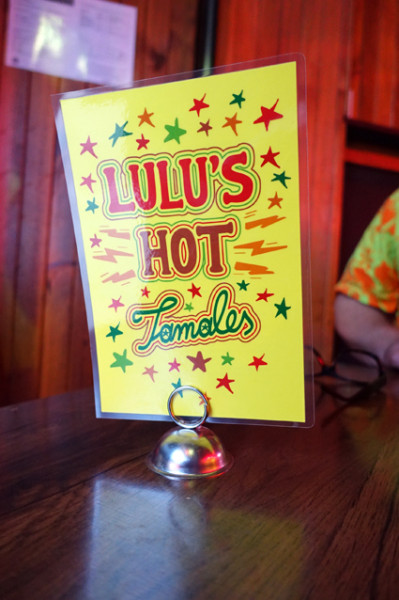 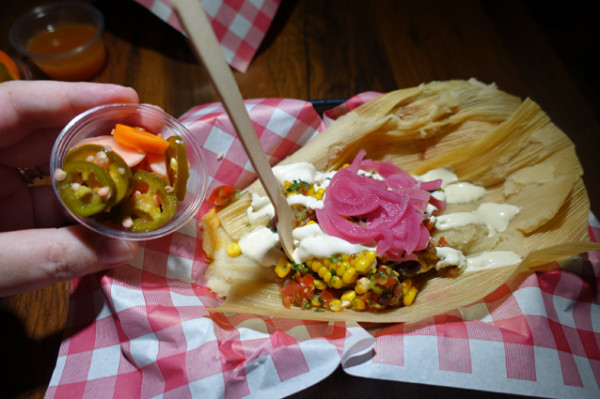 If you’re still scratching your head wondering what the hell I’m talking about, according to Monica, tamales are “kind of like a taco mixed with a dumpling”. They’re made from a starchy, usually corn based dough, that’s steamed in a cornhusk, then dressed with a variety of toppings. When Monica first began making tamales, Sydney was pretty much devoid of this popular Central American street food, though recently I've eaten a few elsewhere. 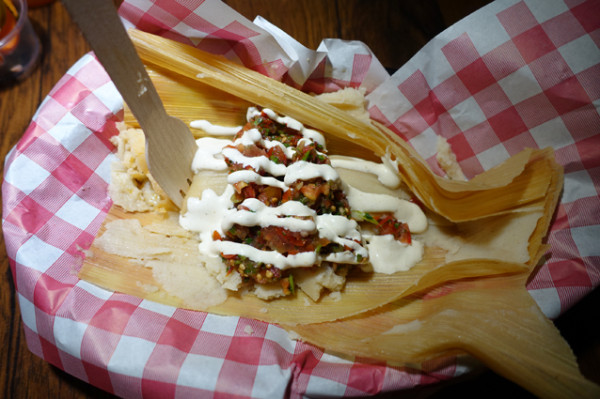 We kick off with her Chipotle Pork Tamale ($9), which starts with free-range, provenance traceable pig from hip Rozelle butcher, Mr Baillie & Co. Monica cooks the tasty pork neck and shoulder for 12-hours in her secret spice blend, then wraps it up in a corn parcel. It’s served with fresh salsa and lashings of cumin lime crema (like a light, runny crème fraîche). It’s tasty without being spicy, so I encourage you to make liberal use of the pickled jalapenos in the Mexican Pickles ($1) and Monica's even better homemade Carolina Reaper hot sauce: Don’t Fear the Reaper ($1). The fruity hot sauce goes even better with the Veggie & Cheese Tamale ($9).This tamale is stuffed with well-caramelised sweet potato and juicy clusters of sweet corn. Monica’s even got a local mozzarella maker - Vannella Cheese - whipping up queso Oaxaca for these babies. They also contain black bean salsa and more of that lovely cumin lime crema under a tangle of pink pickled onions. Hands down this is the best tamale I’ve tried – it’s tasty and filling without being stodgy, and the texture is moist rather than crumbly. And her hot sauce is incredible - I'd have bought a jar if she were selling it! 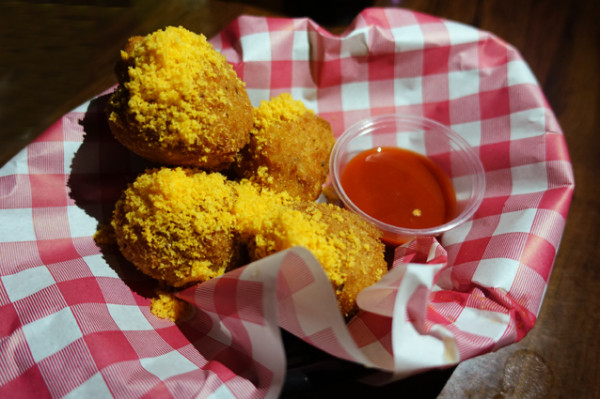 The rest of Monica’s short menu is inspired by the food she has encountered on her yearly treks through small town USA, where she collects jazz, blues and gospel records. In Savannah, Georgia, Monica uncovered “a crab mac’n’cheese that blew my mind”. Her Fried Mac & Cheese Bites ($8/4) pay homage to that dish. With limited kitchen space, Monica fashions the lovely moist mac’n’cheese into balls, which sadly ruled out the crab because the flavour gets lost in the deep-fryer. No matter, she’s laid on Old Bay seasoning, and a Cheetos dust to keep them the orange colour of her memory, with Frank’s tangy, hot sauce passed separately to help you digest the cheese. They’re great, drunk, messy bar food, eaten in a bar too dark for anyone to see you wearing the telltale orange dust. Speaking of drunk, did I mention the bar has a great Shots & Giggles menu? I should know, I tried the whole range, starting with the excellent house-smoked jalapeno tequila. In the Tokyo Amigo ($10) it is teamed with a Bloody Mary mix chaser, though the tequila is so smooth and easy to drink, the chaser is pretty much superfluous.The Appleback ($9.50) will wake you up by following Jameson Irish whiskey with heavily Tabasco-laced fresh apple juice; though my favourite shooter was the Flaming Sailor ($10). 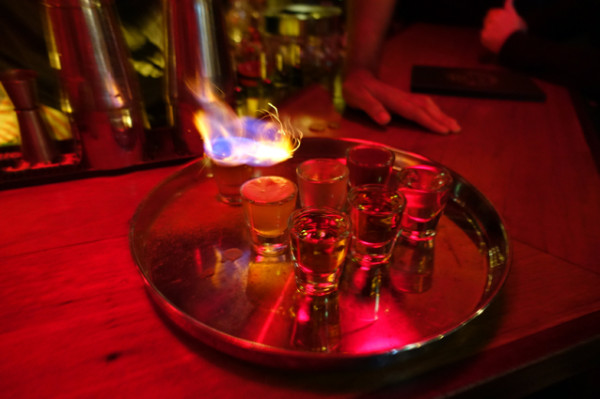 It takes Sailor Jerry spiced rum and spiced pineapple, tops it with Bacardi 151 and sets it alight before dusting the drink with cinnamon. Just think grilled pineapple rings with a boozy kick. 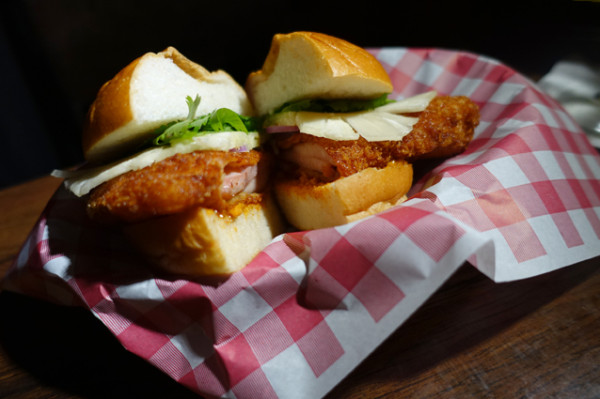 Pineapple is also a big feature in Mexican Katsu ($16). This burger is a play on Mexican al pastor “shepherd style” dishes usually made with pineapple, chilli and thinly sliced pork. Monica has taken the al pastor spices - chilli, pineapple juice, onion and coriander stems (she hates waste) - and marinated free-range chicken thighs. The chicken is panko crumbed and placed on a Luxe burger bun with freshly shaved pineapple, coriander leaves and chilli mayo. The use of juicy, good quality chook makes this burger a particular winner. 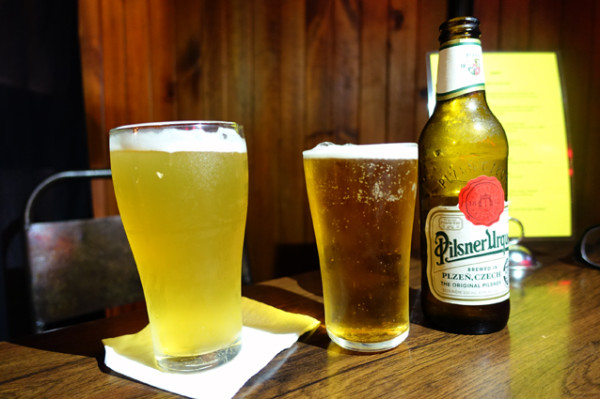 Young Henry’s Natural Lager ($9) is on tap here, and was a good, easy-drinking chaser after our shots session. If you’re really just here for the drinks, consider a little side order of Hushpuppies ($8/6 pieces). While they might not win any culinary awards, these little nuggets of twice-fried corn bread batter flavoured with jalapeno and chives are great at soaking up booze left sloshing around in your stomach. I end my night with Banoffee Pie ($8). This is a killer version of this popular dessert that’ll float the boat of anyone who goes bananas over gooey, chewy Anzac biscuits. The biscuit-based slice is kept from sugar-overload through the use of salted cultured butter, albeit balanced with dulce de leche, whipped cream and freshly sliced bananas. I’d come back just to eat it (and the veggie tamale) again. 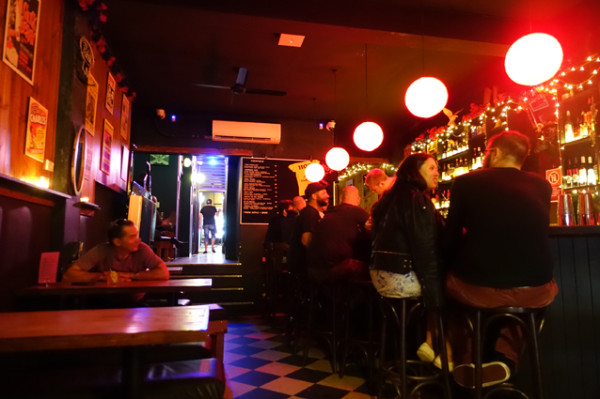 Lulu's Sydney is a crackin’ pop-up from a genuine, passionate artisan maker who is inspired by the things she eats on American road trips. It’s a hell of a lot cheaper than a road trip through the U.S. of A, but it's only running at The Midnight Special until April 15. You have been warned.