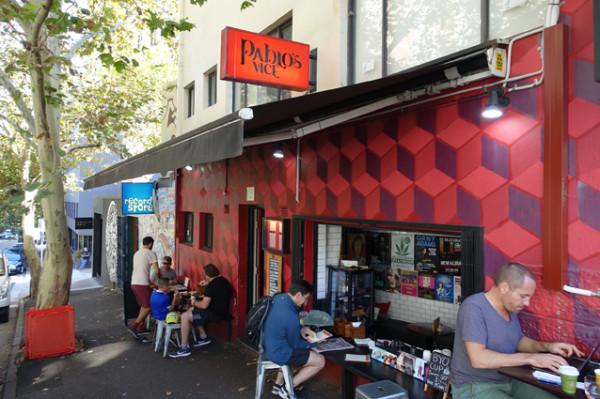 Pablo’s Vice has been a Darlinghurst fixture for as long as I can remember – twenty-one years in fact. The subterranean cafe is tucked right behind the even more longstanding Route 66 on Crown Street, though it opens onto Goulburn Street. With a bright rainbow Rasta gorilla mural by Mulga the Artist on the opposite side of the street and leafy green tree cover providing shade, the coveted outdoor tables are the place to be. Though if they’re full, the tiny interior is actually better than it appears from outside. 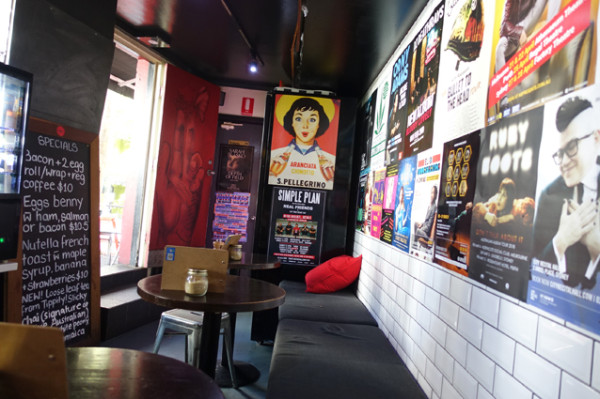 With Sydney Posters providing the colourful décor, the space is small without being poky. 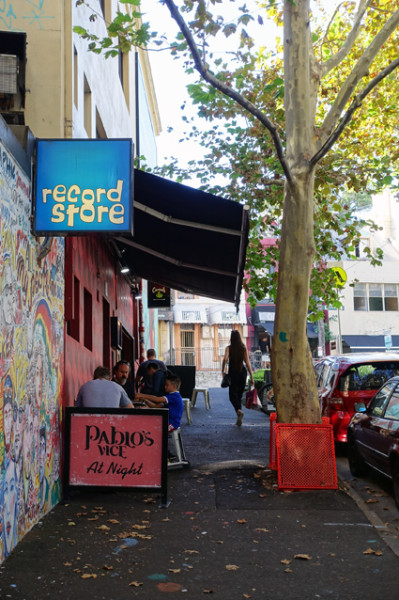 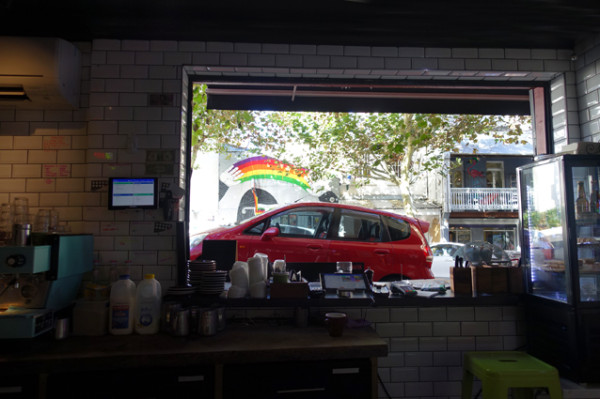 From your table along the cafe-length banquette, the large window makes the semi-underground location feel quite pervy, as you watch the legs of people and pooches parade by. 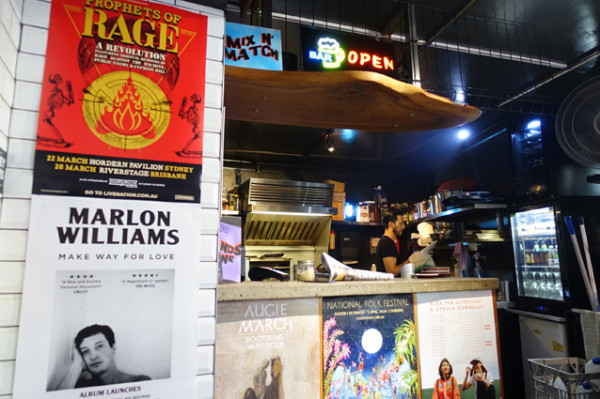 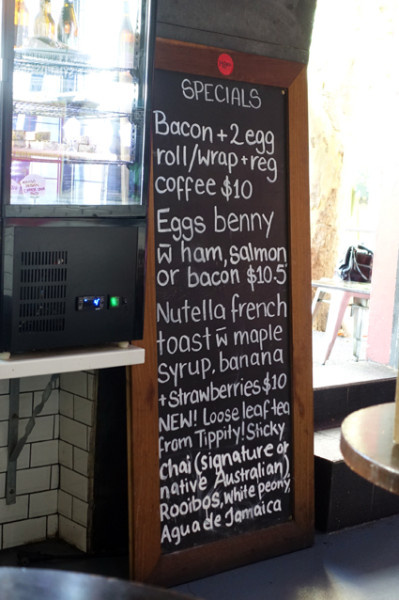 Three well-placed speakers means lovely, round sound, with bass you can feel in your toes. The thumping soundtrack of Nightmares on Wax and Zero 7 (tracks we also have in our home collection) really got our Saturday morning started right. 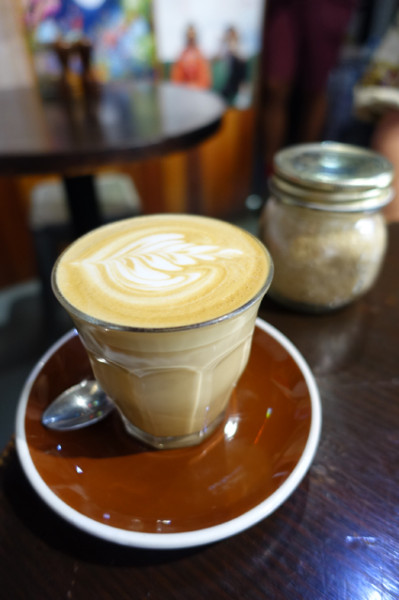 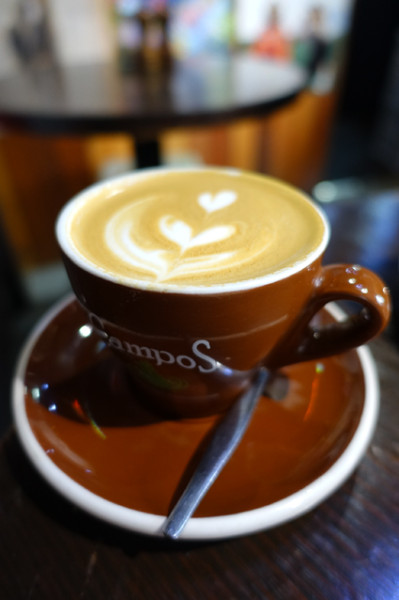 Well-made Campos Coffee didn’t hurt either. This coffee actually can handle a double shot, as it was slightly dominated by milk in my Latte ($3.80) but perfect in a Strong Flat White ($4.30). 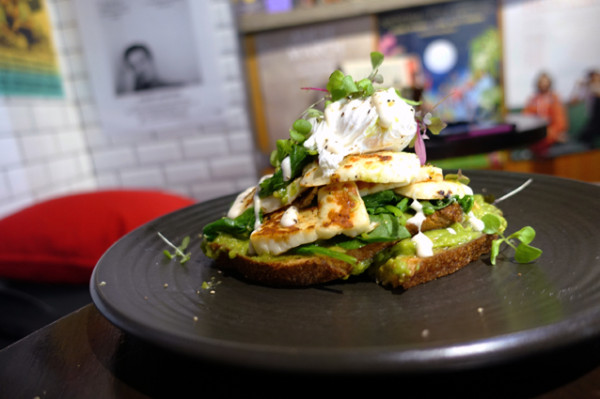 In term of food, Pablo’s Vice feels like an honest, modern café. Sure you’ll find the ubiquitous smashed avocado (OK, I really prefer it sliced), but the dishes here feel more about flavour than awkward towering height, super-sweet Persian fairy floss, or rafts of edible flowers. The Haloumi Stack ($12.50) takes a generous amount of golden, pan-fried cheese, teams it with wilted spinach, aioli and a poached egg, and sticks it on smashed avocado smeared rye. It’s tasty, the portion size is right, and I don’t have to spend the first ten minutes trying to work out how to dismantle it into something I can actually eat. 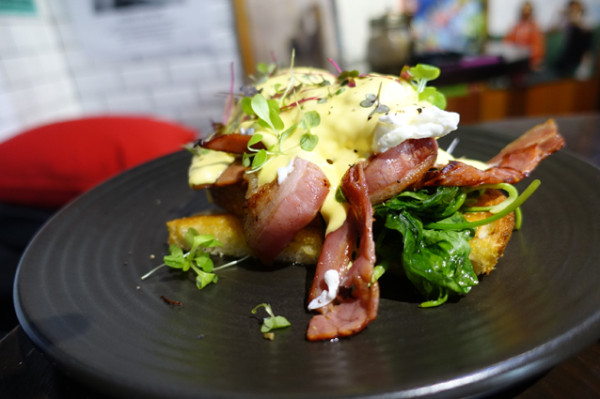 From the specials chalkboard, I’m equally pleased with the Eggs Benny with Bacon ($10.50). It’s got a good amount of decent bacon, a pair of poached eggs and some wilted spinach sitting on sourdough toast under an appropriate drizzle of light, airy Hollandaise. I appreciate that it’s not drowning in a lake of yellow sauce, and that the only garnishes are micro herbs, which actually add to the dish’s flavour. The price is very good by Darlinghurst standards, though I personally don't mind paying more for higher quality pig. 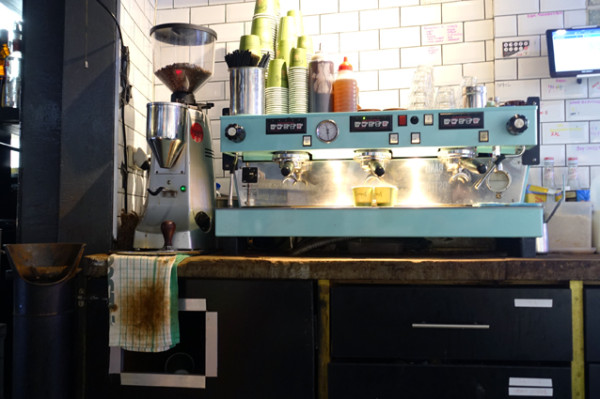 After my visit I had a chat with owner Bruce Schaafsma, who took over Pablo’s Vice two years ago. “Pablo’s was a nice little starter business to test the waters for me,” said Bruce said, who went on to explain that the café was a chance to revive an interest in food and beverages that developed during his early working years. These days Bruce is a Certified Practicing Accountant, and together with his Italian girlfriend (who he says “is a wonderful chef / cook”) they’re running Pablo’s “under management” while they both work other full-time jobs. With his son studying at Ryde Catering College, Bruce sees the café as “a great opportunity for him to learn about all aspects of a small business in a wonderfully eclectic part of Sydney.”