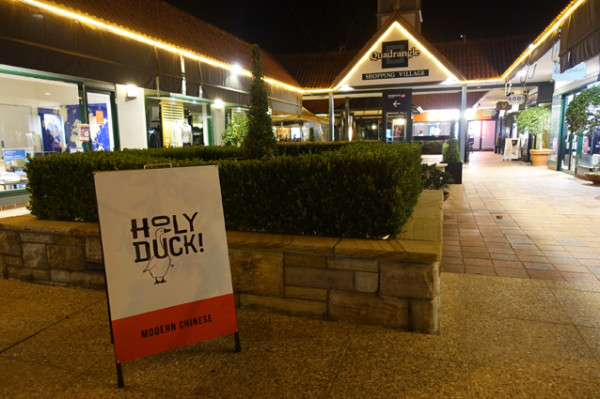 The good burghers of Castlecrag recently received their own Holy Duck! offshoot from the Chippendale original. It’s set in Quadrangle Shopping Village, a dated little neighbourhood mall that opened with low-lying street frontage, forty years ago. The impact restrictions came because the shopping centre sits just outside the Griffin conservation area. Leading architect Walter Burley Griffin (known for designing Canberra) subdivided Castlecrag back in 1921. He set about building an idyllic community with a consistent architectural feel, using small houses with flat roofs and internal courtyards that drew in the surrounding bushland. 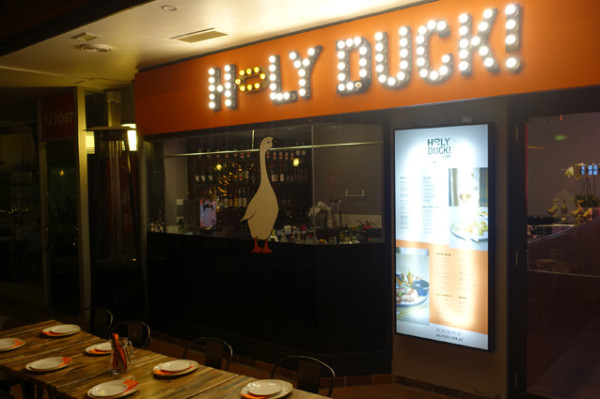 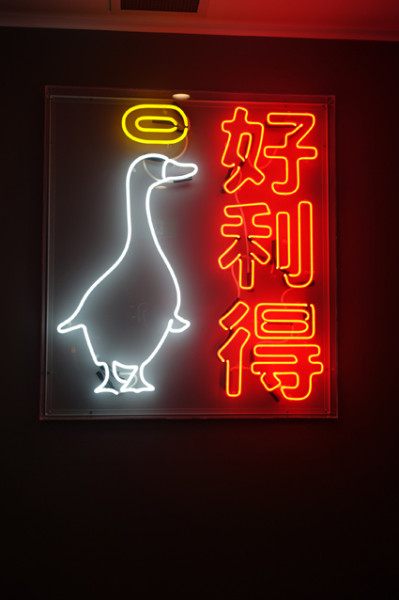 Cut to 2016 when Dr. Stanley Quek bought the centre for a cool $25 million. Quek intends to develop The Quadrangle into a modern collection of shops and restaurants, with an emphasis on alfresco dining. From his Kensington Street empire, Quek has already brought across a casual version of Mekong, which he has dubbed Bistro Mekong. With a more romantic courtyard setting, this Holy Duck! neighbour is already currying favour with the locals. 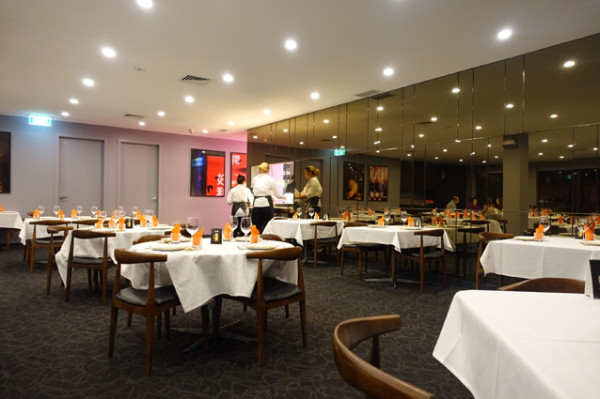 While Bistro Mekong is predominantly outdoors, the brightly lit Holy Duck! corner spot gives way to a large, somewhat soulless dining room that reminds me of the giant Cantonese restaurant palaces I used to visit with my parents as a kid. 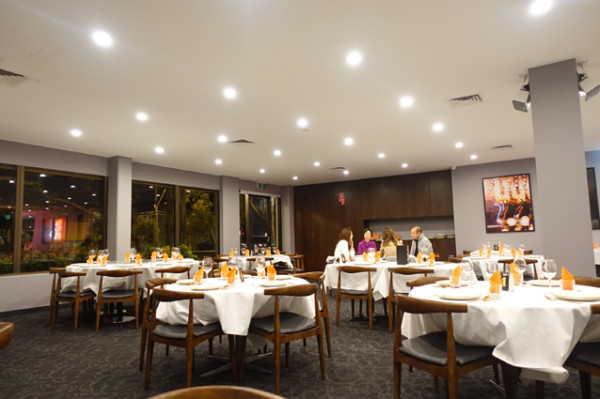 While the brightly coloured serviettes remain, the table settings have been updated with matte gold cutlery, and most of the crockery is high-end. The Green Tea ($2.50/head) remains the way I remember when I opt for a pot for nostalgia’s sake. 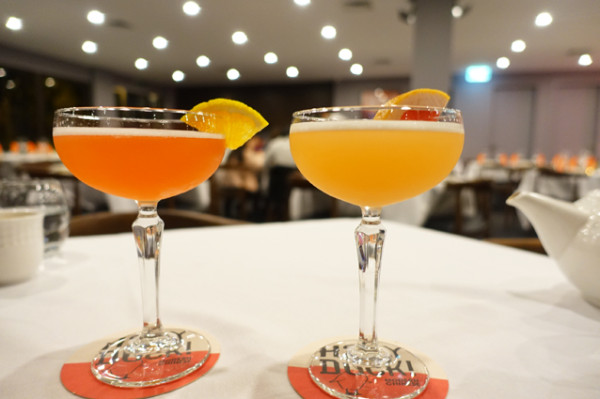 Along with some glossy,modern blurred light prints on the wall, cocktails form another pole of this modern Chinese paradigm. While the HD Royale Martini ($17) has so many ingredients it drinks more like it should be a tall cocktail, the blend of orange-infused vodka, HD duck-infused Grand Marnier, Campari, Aperol and fresh lemon is very duck appropriate. The infusion adds a hint of mystery into all that orange. 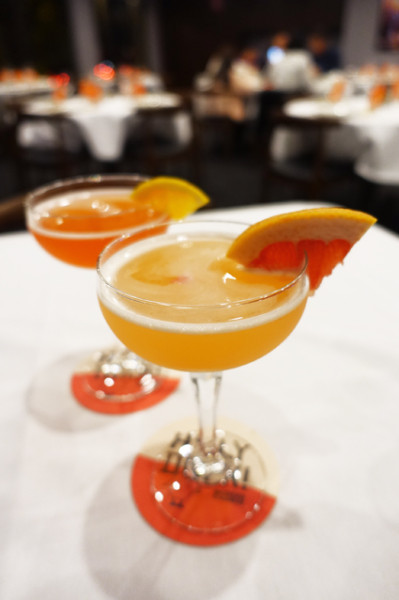 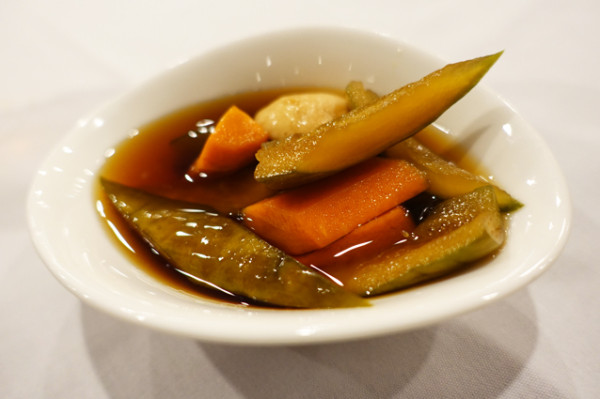 The Organic Honey & Pink Grapefruit Paloma ($17) takes a simpler mix of tequila, organic honey and pink grapefruit juice, and drinks a lot less orange, though it could do with more fat cutting grapefruit tang. Instead I make do with vinegar in the form of a crisp collection of Chinese Pickled Vegetables ($6). Suitably limbered up we approach the Signature Crispy Duck ($39/half) which has been marinated with spices, steamed until tender, then deep fried as you order it. 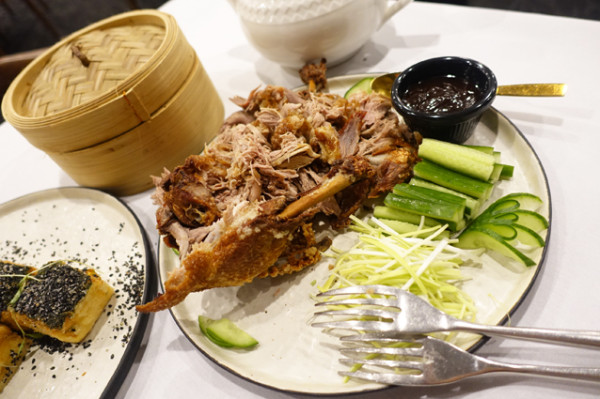 It’s dismembered by friendly staff at the table in the manner of pulled pork, and served in the manner of Peking duck (despite being a Sichuan dish). No matter – it means you get pliable pancakes and a credible, thick, sweet hoisin to slather them with, before artfully arranging your cucumber and finely shredded spring onions. Roll, eat, repeat – you know how this works. 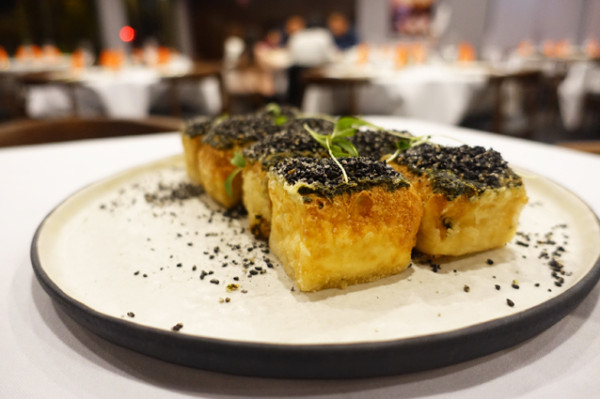 Handmade Tofu ($19) is a collection of crisp fried tofu cubes capped with spinach lids and seasoned with pink salt, sugar and black sesame. They’re a total, textural delight with crisp chewy skins and wobbly custard-like interiors. They only want for some soy to balance the addition of slightly too much sugar, and some chilli sauce to make them sing.

Therein lies my conundrum with this exemplar of modern Chinese. Taking away chilli, soy and vinegar from the tables feels like a mistake, especially when (bar for the duck skin) they have also removed MSG. 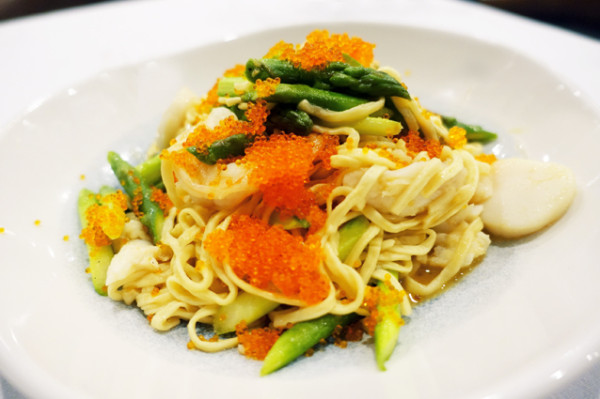 Dishes, like the Seafood Ee-Fu Noodles ($29), lack the big savoury middle I’ve come to expect from Chinese food. It's not saucy or bold, so it really defies your palate’s expectations of Chinese food. The dish's subtlety does however make me really enjoy the classic, linear Tumbarumba characteristics of the 2016 Coppabella Estate Chardonnay ($9/glass). The wine is perfectly chosen for duck too, with bitey, limey minerality, scrubbing up much better than the 2016 Ingram Road Pinot Noir ($9.50/glass).

The new Holy Duck! is worth a look if you’re keen to sample modern Chinese, which by definition, is obviously different to the Chinese a forty-something like me grew up with.