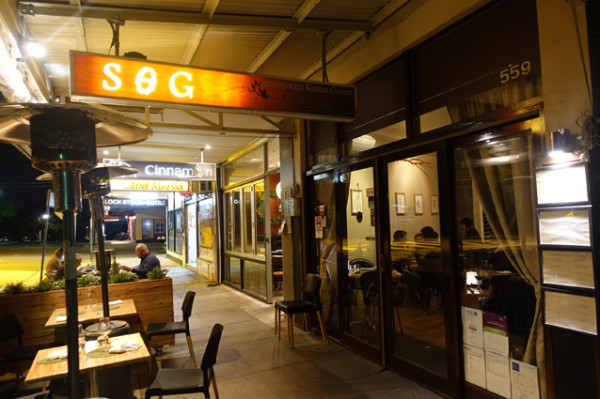 A tiny strip mall in suburban Abbotsford wasn’t where I was expecting to find one of the best modern Korean meals I’ve eaten. S.O.G. Restaurant is two years old, but seems to have flown under the radar, perhaps because of the location, small number of seats, or the arguably terrible name. 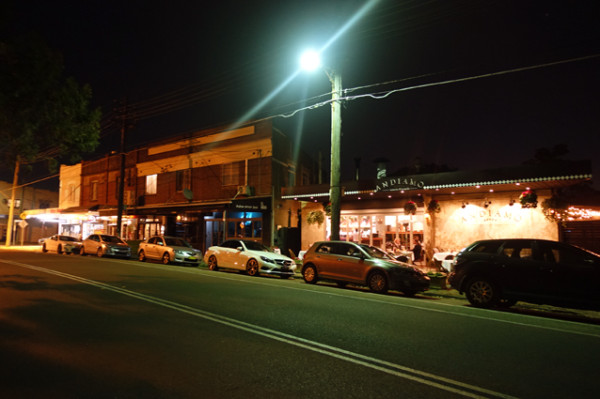 It stands for Sanctuary of God, and while it was intended to imply that the restaurant is a peaceful space, the waitress also let me know: “we are Christian.” Don’t let the display of privately held belief put you off, the menu put out by this young couple – Chef Giwan Kim and Pastry Chef Sun Young Park – is quite extraordinary. 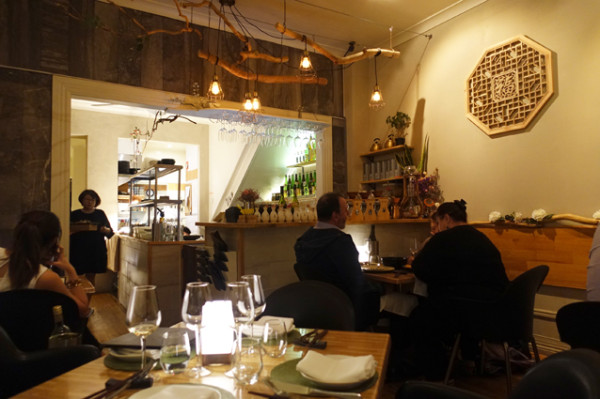 You’ll enjoy it in a small dining room that is softly lit by caged Edison bulbs tied around hanging driftwood. On the walls of the neutral, organically toned space you’ll find traditional Korean windows, with their intricate wooden designs. 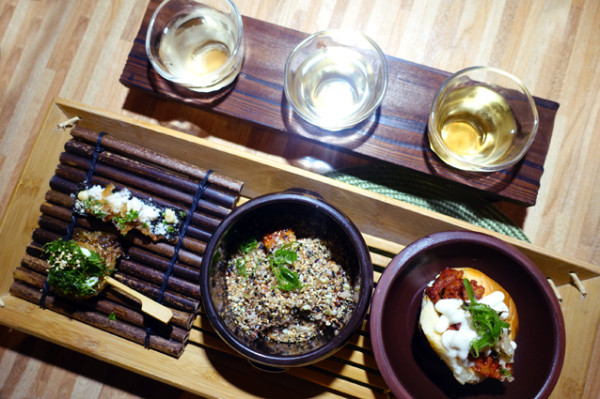 Wood is also employed in many of the serving items, including the Snack Plate ($16). Drawn from their entrée list, the wooden board contains four little bites, starting with a shiso-leaf topped lollipop of pork and kimchi. Joining it on a wooden mat is a mouth-pleasing seaweed cracker topped with fresh crab, macadamia, soy-radish pickle, sesame and chives. In one of the two little bowls, you'll find a tasty barbeque pork slider that gives a big hit of coal fire cooking balanced with kimchi and aioli wrapped in a tiny milk bun. In the other bowl there's gochujang eggplant. Topped with sesame seeds and fried onions, the eggplant has a sweet intensity from the house-made Korean chilli sauce, so it eats best last.

Ordering an accompanying boat of Korean Traditional Wine ($15) is an easy way to get acquainted with Korean beverages. Sul Jung Mae Gold ($28/375ml) is a nice acidic plum wine, with 14% alcohol, and real gold leaf at the bottom of your cup. You’ll find it suits the pork skewer and slider. 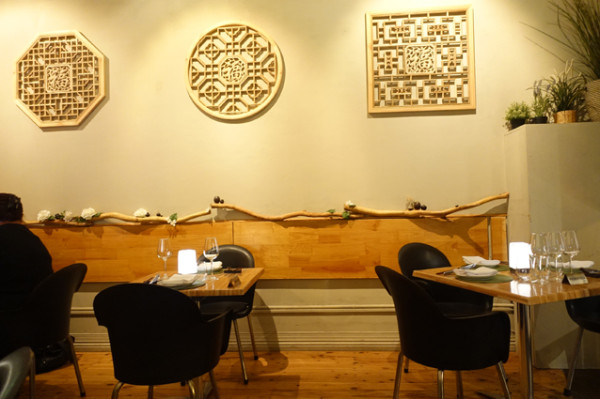 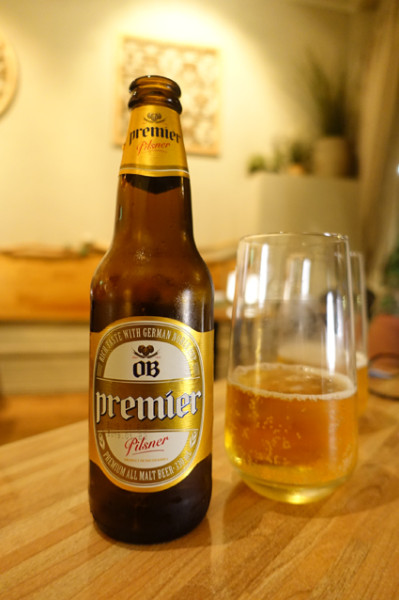 Hui Wild Ginseng Ju ($140/700ml) is much stronger at 25% alcohol so it probably matches best to dishes with lighter flavours. My favourite is Baek Se Ju ($30/375ml) a herbal wine with the lowest alcohol at 13%. It’s a bit smoky and toasty like the inside of a wine barrel. It’s made using glutinous rice, nuruk (a yeast starter) and twelve different herbs. I found it went best with the crab stick. All of these entrees could also be matched with Korean OB Beer ($7). 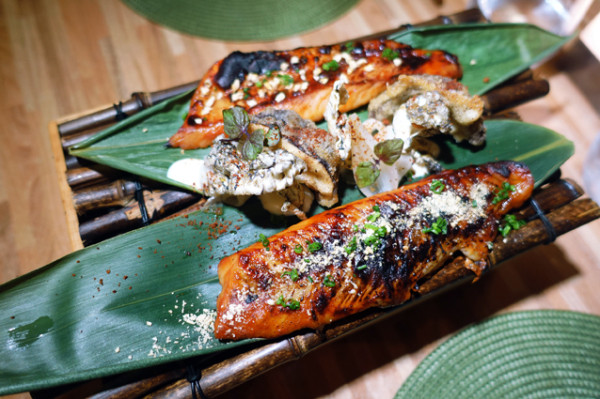 We move onto Jang Barramundi ($38) painted with the house-made gochujang and oven baked then served as belly and loin on green leaves over a smoking box of cedar charcoal. The loin is topped with sesame, and proves to be my textural favourite over belly where the fat is cut with yuzu and sweet pickled onion. We intersperse tender flakes of fish with tempura dehydrated barramundi skin run though yuzu mayonnaise, king oyster mushrooms and sweet onion pickles. It’s an exciting dish. 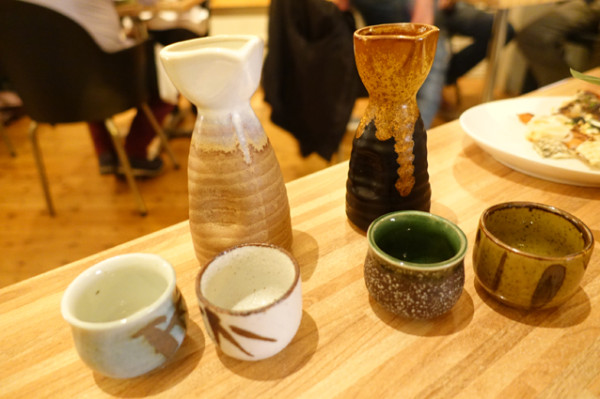 Buoyed by the matching adventure we had with the traditional Korean wines, we pick two Japanese sakes to accompany our mains. We find it is the junmai ginjo emperor’s sake, Souhana ($23/300ml), is balanced with a mild aroma that goes better with our fish.The daiginjo sake, Takashi Mizu ($21/300ml) is aromatic, light, and round, and thus perfect for consuming with Crab Sujebi ($28). 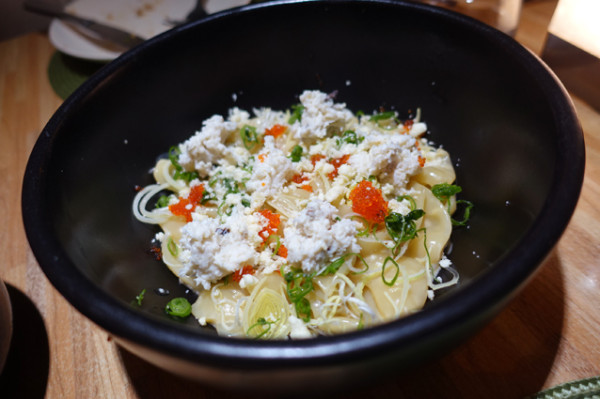 This intriguingly toothsome pasta dish provides the same textural pleasure we love about tteokbokki (Korean rice cakes). The dish is loosely based upon a hand-torn Korean noodle soup (sujebi), though here Kim has dressed his translucent pasta with a harmonious blend of beautifully handled crab bound together with dashi cream, smoked feta, leeks, shallots and flying fish roe. 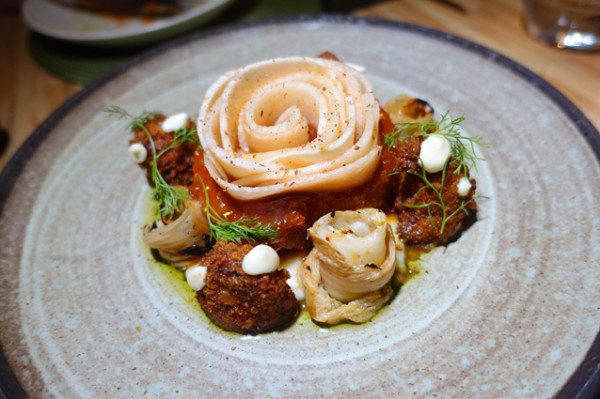 A photo of S.O.G.’s notorious P.O.R.K. ($36) was the dish that convinced me to take a risk with modern Korean in Abbotsford in the first place. The “P” is a beautifully rendered slab of 18-hour slow cooked pork belly. The “O” is the fried oysters that surround it. The “R” is the sweet pickled radish rose that adorns the eyecatching dish. The “K” are the buds of grilled white kimchi that surround it. I have literally no analogies for this dish, which is bound together with a chunri jang sauce, ginger snap tea powder and coriander with a ssam jang glaze on the pig, but I definitely like it. 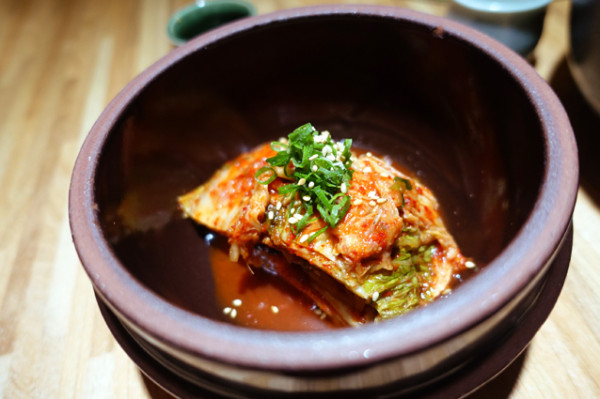 Traditional Kimchi ($5) is pretty subtle here, lacking in chilli bite. If I had one complaint overall, it’s that these dishes eat slightly too sweetly for me. Don't use that criticism as a reason to stay away from S.O.G. – what they slightly overdo in sweetness, they make up for in wild imagination that keeps a decisively Korean sensibility.