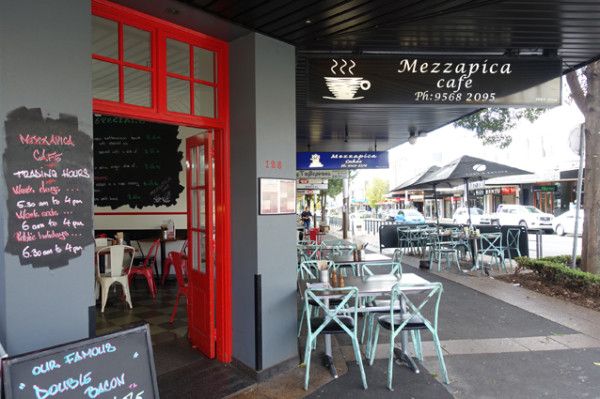 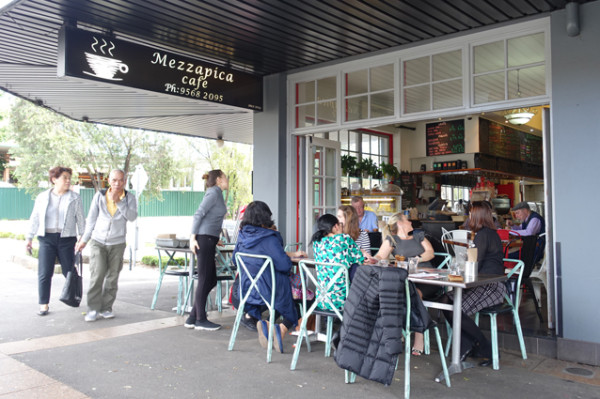 The neighbouring Mezzapica Café, opened by another relative in the same family, has itself been in operation for more than a decade. 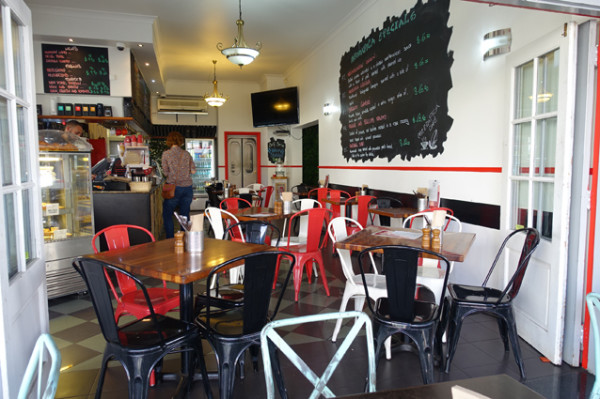 That all changed last December, when Mezzapica Cafe was sold to the expanding café group behind Petersham’s popular The Tiny Giant and Rozelle Espresso. 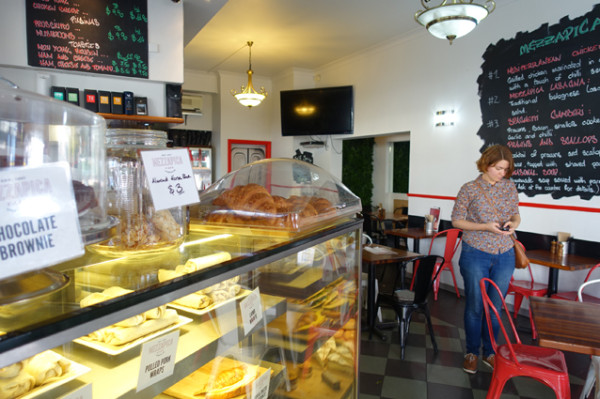 In the ensuing six months the new ownership team have put a soft stamp on their newly acquired venue, adding a short, collaborative Wellness and Fitness menu of healthy dishes, but keeping the Italianate feel that the café was famous for. 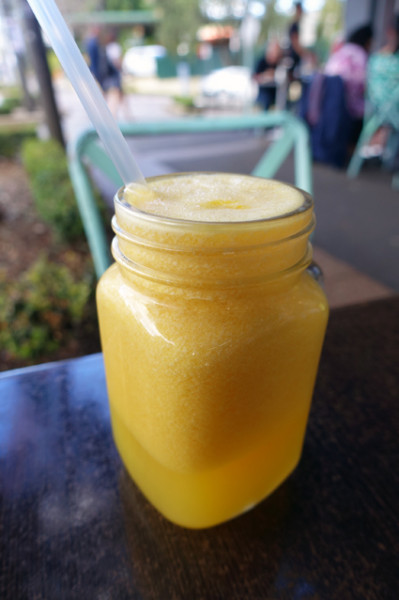 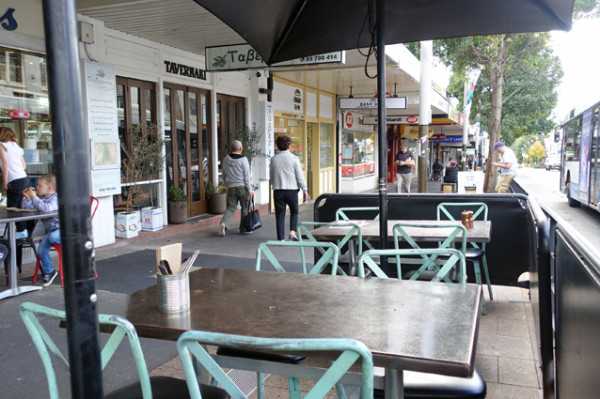 Keen to see what other changes had occurred, last week I popped in for lunch with a friend, her dog and a toddler all in tow. We were quickly set up with high chair and dog water bowl on one of the sunny pavement tables by super accommodating staff. Freshly Squeezed Juice ($7.50) in pineapple, orange and ginger, was quick to arrive. 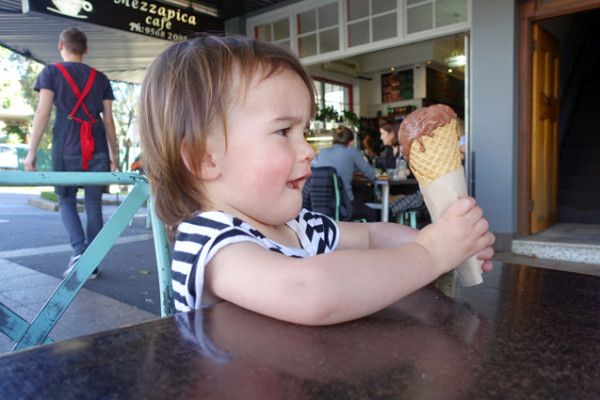 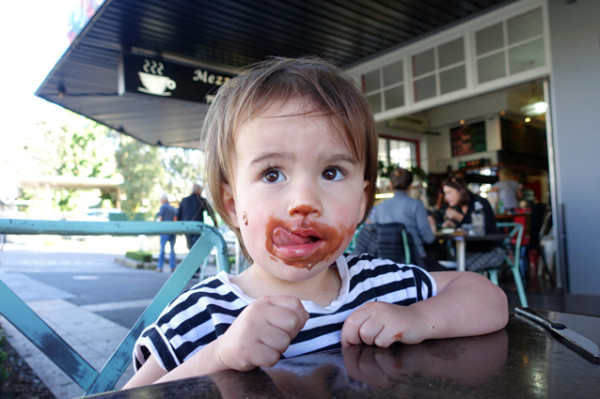 After sternly eyeballing it, she gave it her seal of approval. Miss Two-and-a-Half’s face-licking enthusiasm inspired a little gelato-envy, so I’ve earmarked their gelato counter as something to return to at a later date. 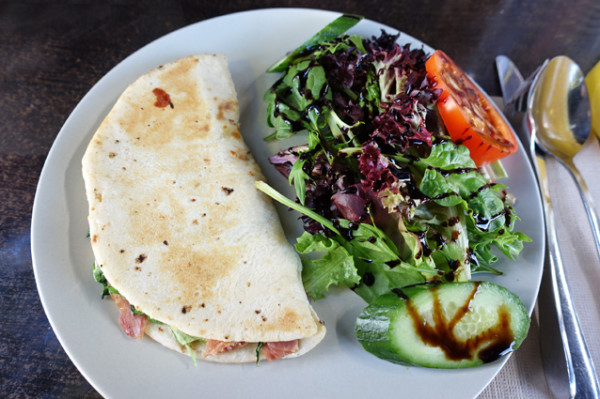 Cooked until they’re flat and crisp, piadina, or Italian-style toasties, are popular with Mezzapica’s lunchtime crowd. We opted for the Proscuitto Piadina ($14), which had a modest filling of prosciutto, rocket, semi-dried tomato and bocconcini, set off by a simple side salad. 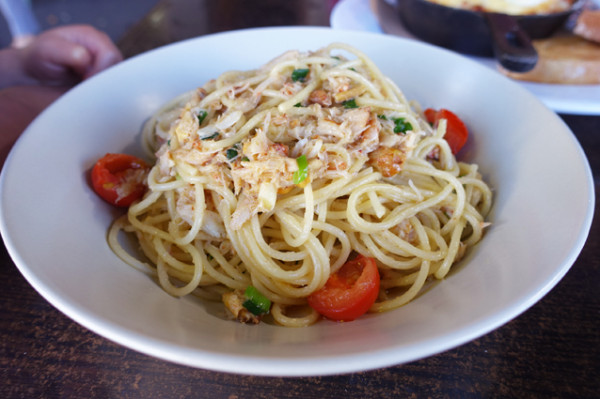 Black Ink Spaghetti with Spanner Crab ($16.90) arrived looking much paler than I’d imagined, with a simple treatment that left the delicate crab as the dish’s main flavour. 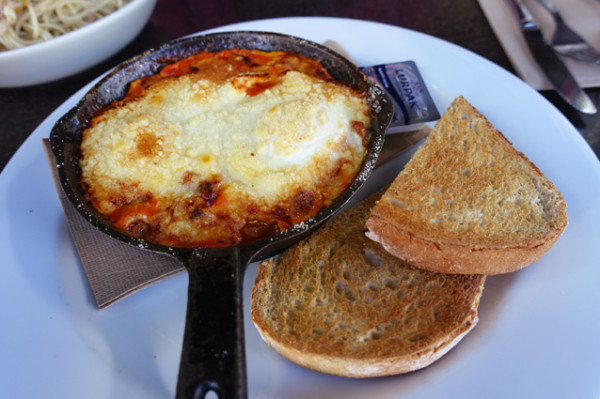 Interestingly, my favourite lunchtime eat turned out to be a spot of all-day breakfast – Norton’s Italian Hot Pot ($19.50). This skillet of two baked eggs hiding under a golden crust of Parmesan cheese takes care of all your breakfast needs with chorizo, and toothsome mushroom slices in a classic napoletana sauce. It’s homey, gentle, and very Italian, making a nice change from shakshuka. It’s presented with two slices of sourdough toast, with a pat of Lurpak butter on the side (I did mention they’ve gone a bit healthy). Not once was I made to feel that our table’s excitable dog or sugar-amped toddler were a spot of bother for this relaxed, family-friendly Leichhardt café.