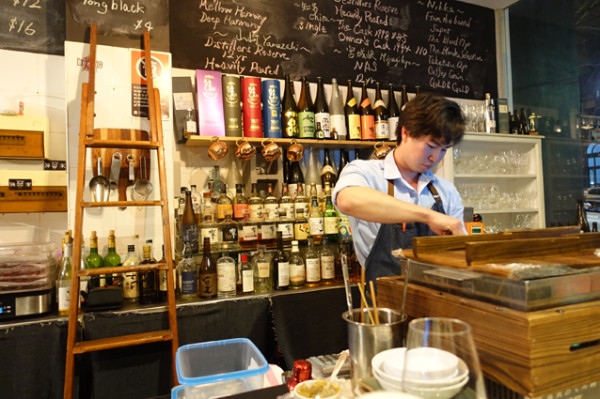 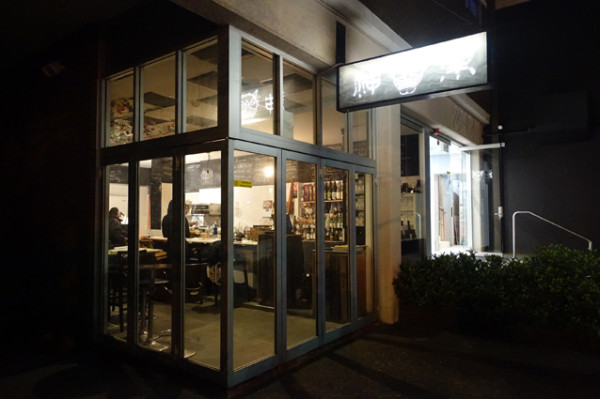 Taking up a counter stool inside the modest glass box gives you a bird’s-eye view of the bottles while you check out the prices on the nearly fifty-strong list. 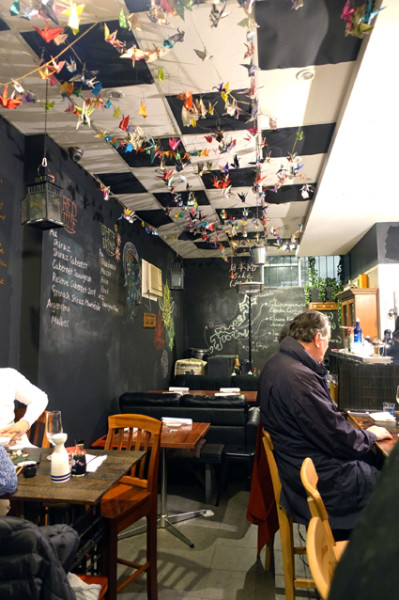 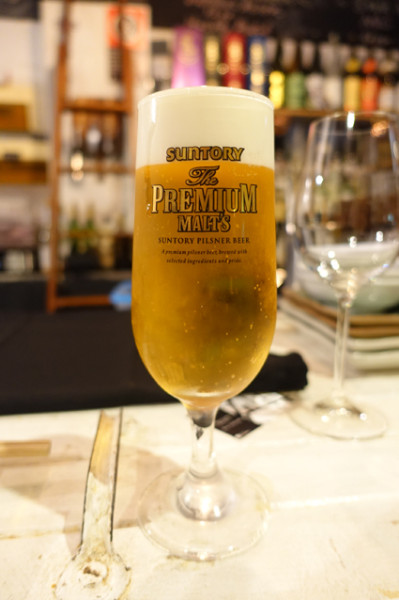 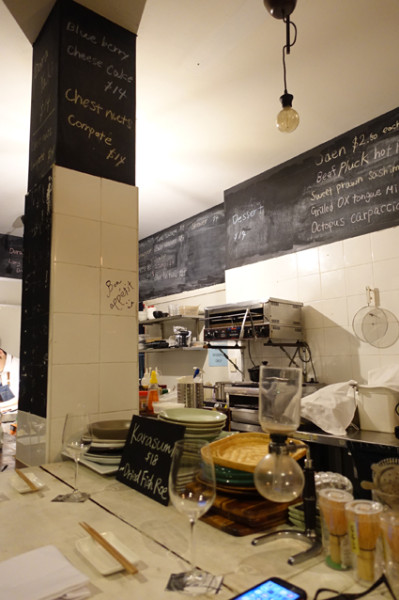 Buy yourself some extra decision-making time with an on-tap Suntory Premium Malt Pilsner ($9.50). The short food menu is supplemented by chalkboard specials scrawled on every available surface of the somewhat cluttered space. Some of the blackboards are given over to chalk depictions of Shinto gods, homage to the restaurant’s "god-entertainment" name. Overhead a colourful collection of paper cranes hang from a chequerboard ceiling. 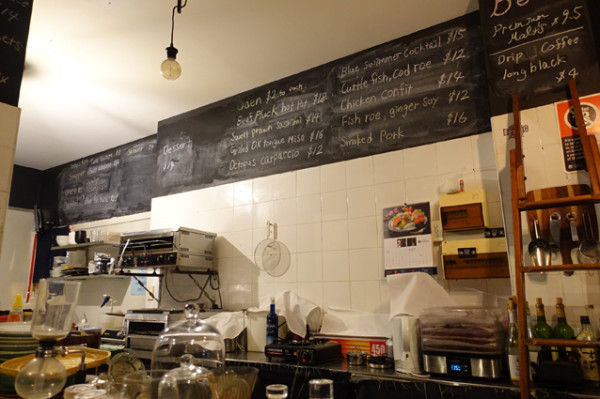 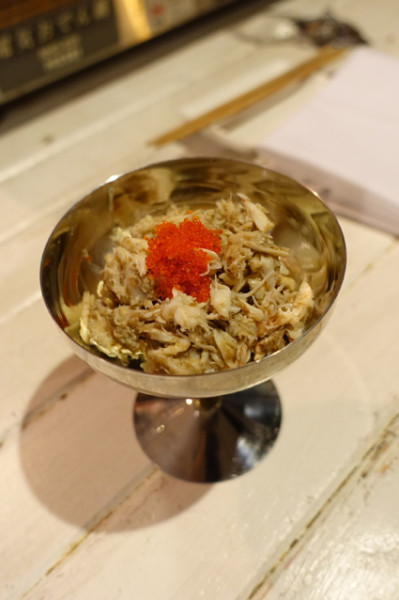 We place ourselves in the hands of Chef Yoshi Harada. Yoshi-san was one Chef Hiroshi Miura's (ex-Rosan) two apprentices. Miura-san’s other apprentice was Raita Noda, a man whom Yoshi affectionately calls “my older brother”. They have each taken their teachings into small restaurant spaces where drinking and eating go hand-in-hand. “This is more like a drinking establishment, but I put extra attention on the food,” says Yoshi-san as he hands over a Blue Swimmer Crab Cocktail ($15). It's an intense blend of crab and crab innards topped with roe, that eats pungently, like being in a rock pool on a hot day. 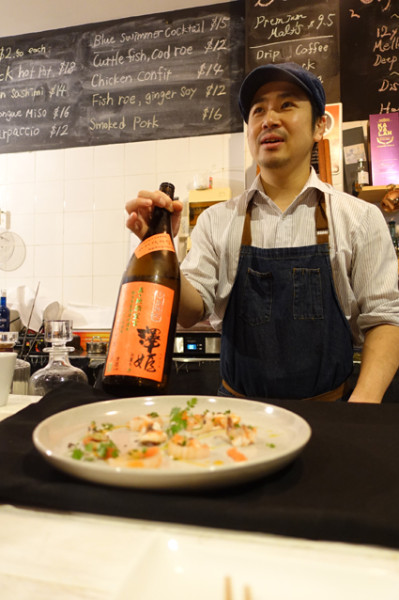 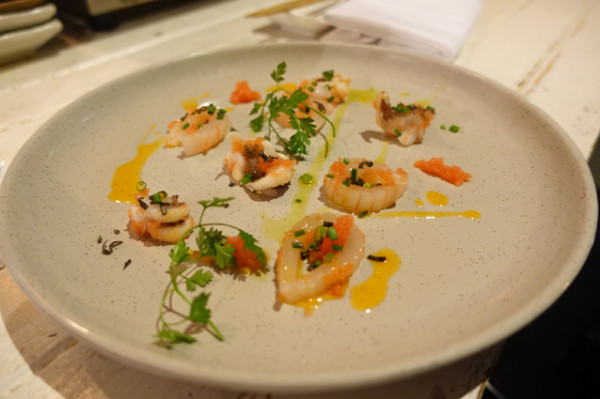 With Cuttlefish Cod Roe ($12), Yoshi offers us Sake B ($18/glass). Yoshi labels his three sakes as A, B and C because he keeps changing them. Today's 'B' is made in the yamahai method, that takes a bit longer, but produces funky, mushroomy intensity. It works to clean the palate after forays into creamy cuttlefish, salty cod roe and pools of hot chilli oil, dotted across the artistically arranged plate. 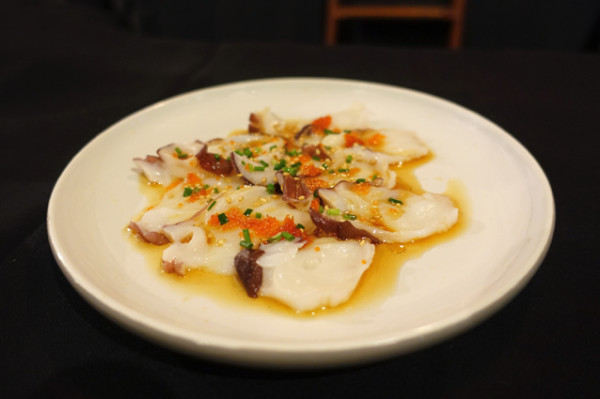 The Octopus Carpaccio ($12) dressed with dashi vinegar is at once creamy, soft and chewy. This dish is an easy favourite, as it celebrates both the subtle flavour and the textural beauty of this eight-legged sea creature. 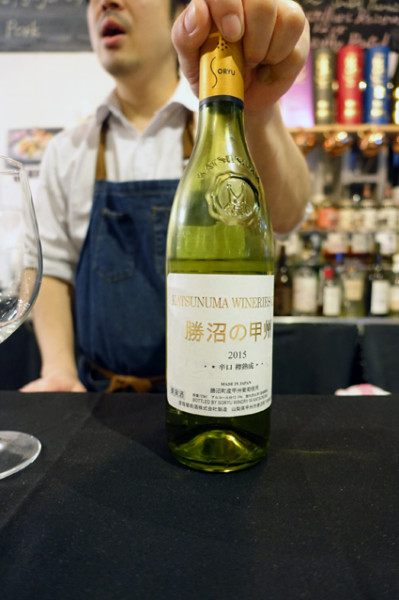 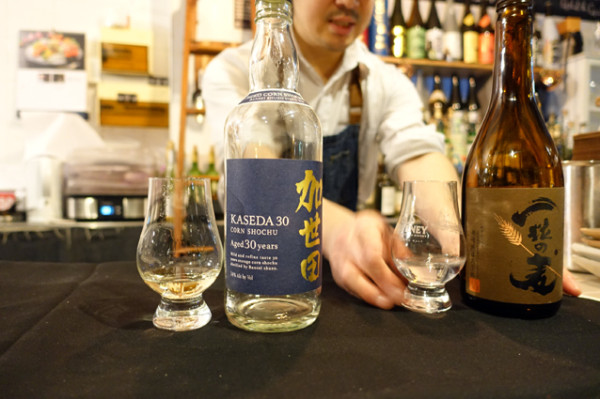 It is best paired with something clean and simple, like the 2015 Katsunuma Koshu ($16/glass), a Japanese white wine made on an indigenous grape called Koshu. 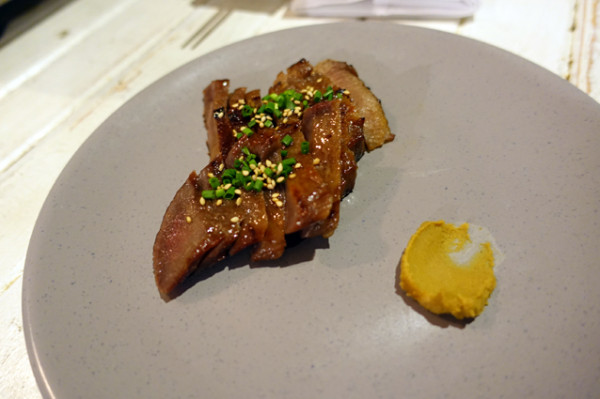 As we work our way through slices of Grilled Ox Tongue ($16) marinated in Yoshi-san’s own miso, punctuated by sharp karashi (Japanese yellow mustard) I sink into the Bill Evans’ jazz soundtrack. The piano, double bass and drums interweave wonderfully with conversation inside this intimate space, allowing diners to get acquainted with the chef. Perhaps it’s our dueling corn and barley shochu talking, but there seems to be a synergy between the fierce technique of the musicians, and those applied by our chef. 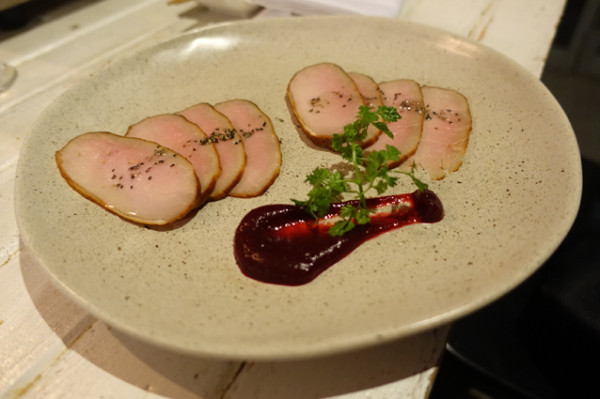 “My cooking philosophy is try to get the umami,” Yoshi says as he hands over his House-Smoked Pork ($16). Eight pretty slices of pig take him about a week to create, starting with a sugar and salt cure, drying, then hickory smoking, before landing on the plate with fresh chervil and a tangy-salty beetroot relish. They’re lovely and moist, with a texture that makes you want to keep rolling them around in your mouth. 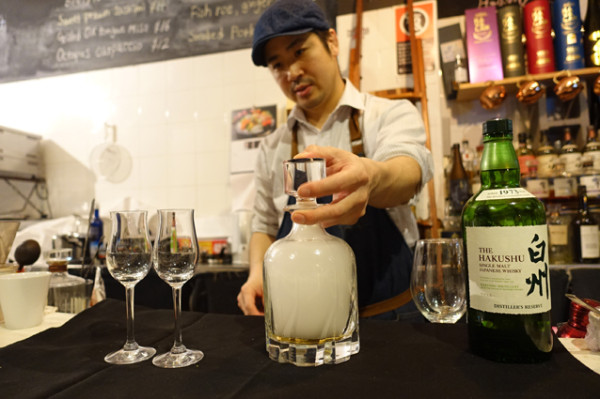 In a marriage of like-meets-like, Yoshi-san teams his smoked pork with Hakushu Distillers Reserve ($22) that he smokes with sakura wood right before your eyes. 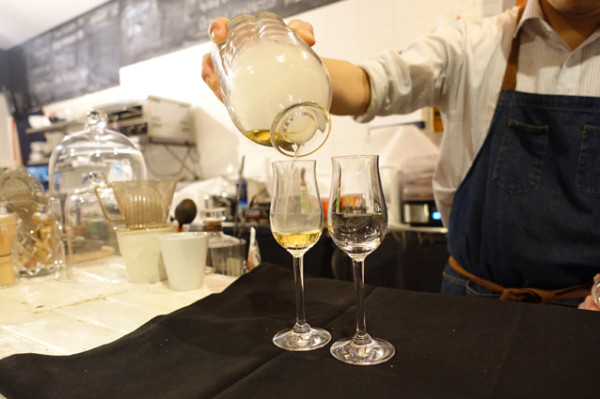 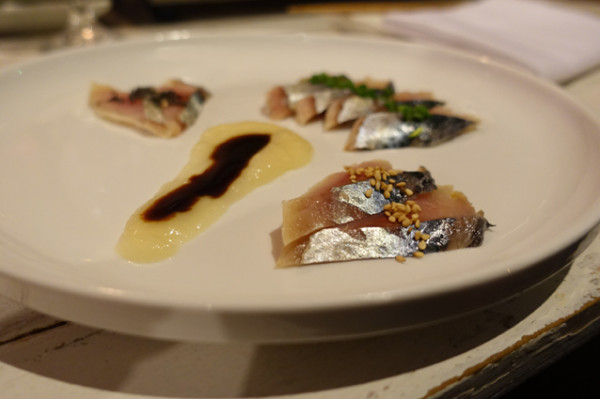 The 2016 Hitomi Soif Blanc ($18/glass) is my first Japanese orange wine. It’s made on two American grape hybrids, Delaware and Niagara. The first mouthful is hard to like – fizzy acidic sharp mandarin – but it’s strangely compelling. Eating a slice of the Vinegar Cured Mackerel ($15) with it cleans up the acidity and brings up salty mandarin. The fish is served with soy, ginger puree and three different toppings – sesame, chives and nori. Like much of the cooking here, it’s a dish that makes no concessions - mackerel is an intensely fishy fish, though with this pairing, it's magic. 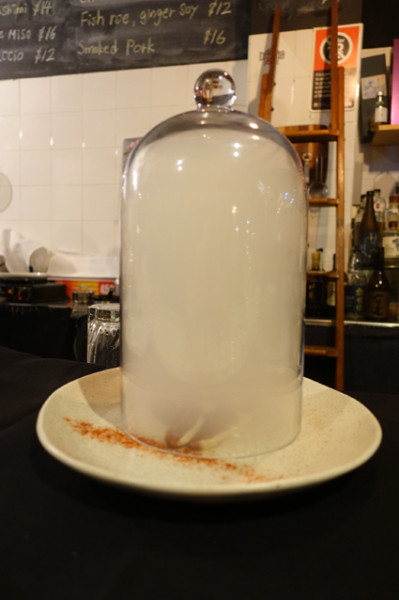 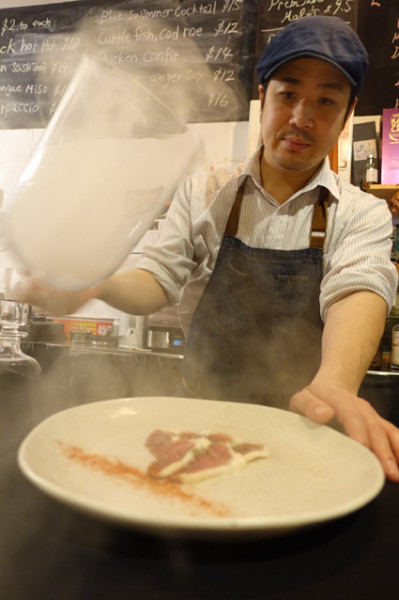 The emphasis on curing and smoking continues into Cured Duck ($15). It’s done in a similar way to the pork, but with some time in the dehydrator as well. Unveiled in a cloud of sakura smoke, the duck has the chewy beauty of rawness against the flavour of cooked meat. 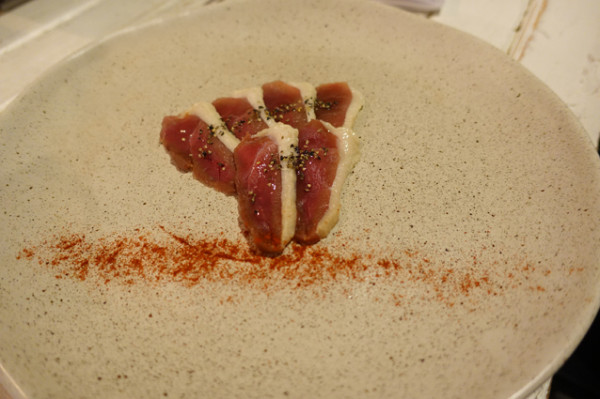 This is duck taken to its absolute height, and it makes me feel humble, like I did when I ate Matt Moran’s scampi for the first time, quickly realising all the scampi I’d eaten before it had been overcooked. I savour my slices against small sips of Nikka Pure Malt Black ($22). 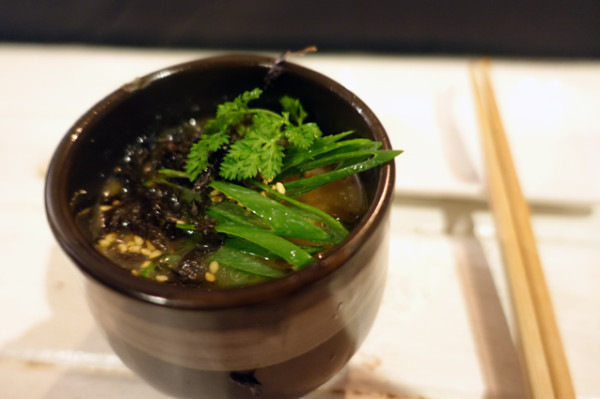 We wrap up with a Kagura Mini Ramen ($15), made with both chicken and fish stock, as we converse with the people next to us. Despite living in Bathurst, they have managed to visit Kagura twenty times.  We bond over liking the mackerel. There’s a beguiling looseness to this restaurant that really makes me feel at home. I foresee a repeat visit focused upon the Japanese whisky collection in my near future.

NOTE: This restaurant is so small, you really need to book. Here's a dedicated booking link: BOOK HERE