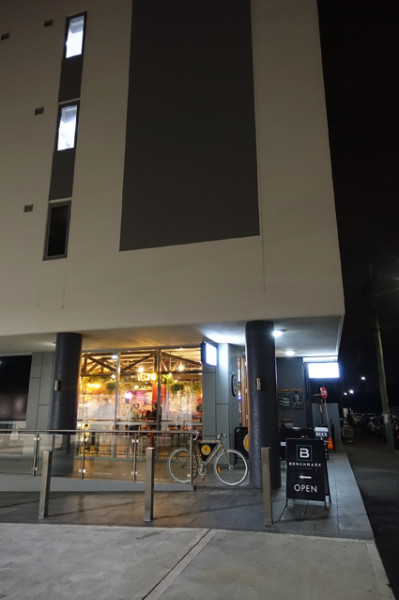 Canterbury already has some top-notch fusion form, with the Pazar Food Collective playing with both Mexican and Turkish flavours. Just down the road in a somewhat soulless, windswept canyon of new medium density housing blocks, Vecino builds upon the suburb’s appetite for experimentation. Co-owners Tony Lee and Eunice Lim are trotting out a unique blend of Korean and Mexican cooking in a little glass box at the base of one of the residential blocks. The restaurant’s name means ‘neighbour’ and from the steady queue of walk-in customers lining the corridor of counter seats waiting for takeaway, it’s clear that neighbours are exactly who they’re here to serve. 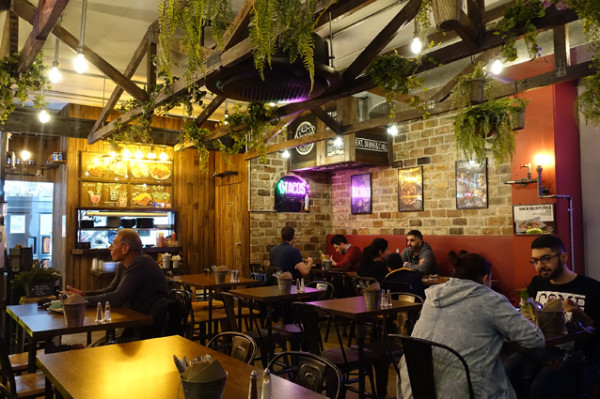 Decked out with neon signs, hanging plastic plant baskets and steampunk style furniture, Vecino looks like something that builds upon the work of the Drink'n'Dine group, all the way down to the dishes arriving in fake newspaper-print lined plastic baskets. 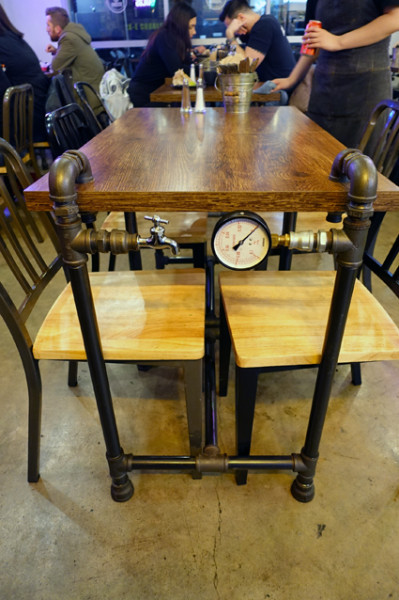 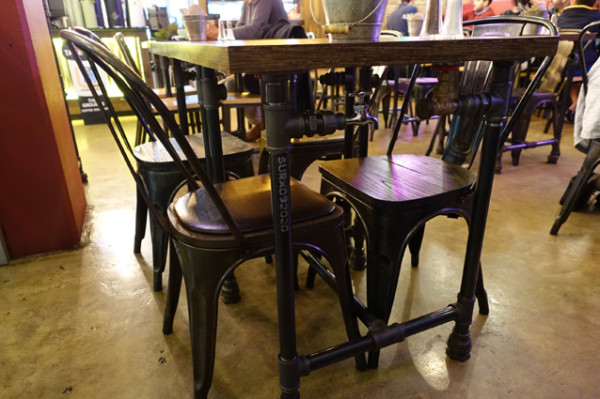 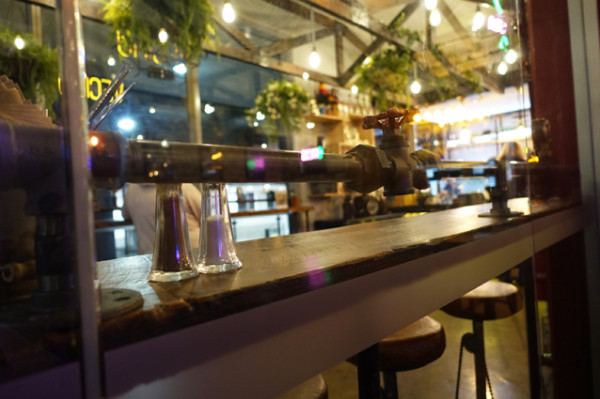 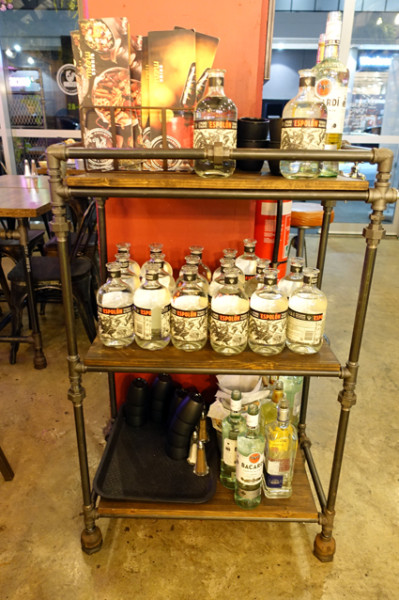 The Vecino team have made all their furnishings themselves, from the steam valve tables, to the bike pedal counter stools, to the pipe cage surrounds of their drink trolley. 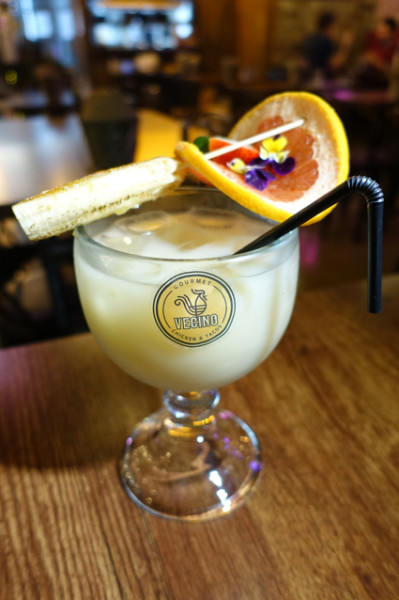 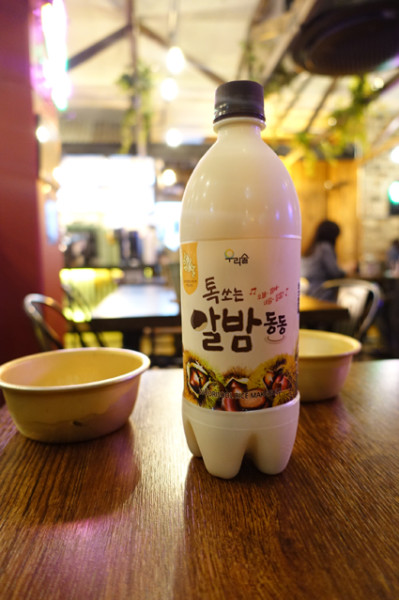 Rather than use a name bartender to create their bespoke cocktail list, Lim explains they came up with Makgeoritas by trying the Korean rice wine “with everything… rum, vodka, tequila.” I give them a whirl in the Honey Makgeorita ($16) topped with fruit and a brûlée banana. It’s surprisingly good, with the sweetness of honey providing an easy way in for those new to drinking makgeolli. Personally, as somewhat of a Korean booze connoisseur, I’m more enamoured with the funky, savoury Chestnut Makgeolli ($14) by itself in golden anodised aluminium bowls. 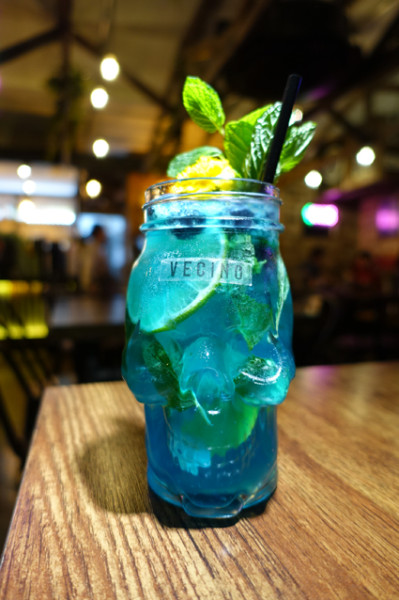 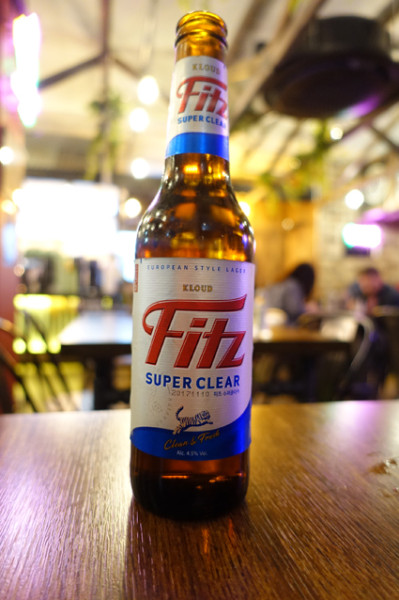 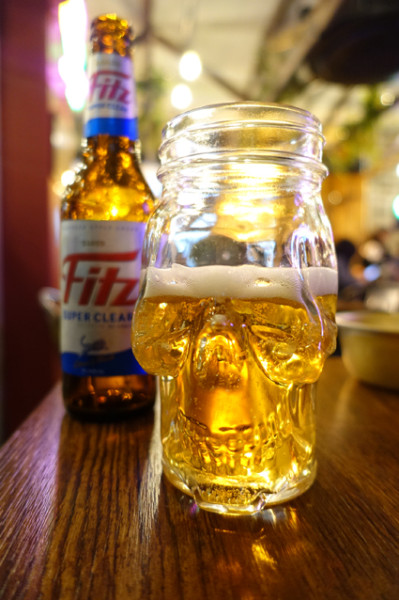 Soju, another common Korean alcohol, is infused into their colourful range of cocktails. We take on the Fiery Skull ($15), which oddly turns out to be so cool, blue and refreshing, you can’t even taste any booze. With beer and fried chook being a perfect pairing called chimaek, throwing a Korean Fitz ($8) lager into your drinking mix should be a given. 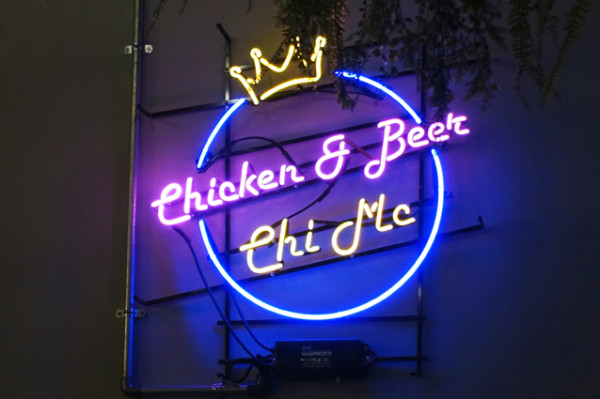 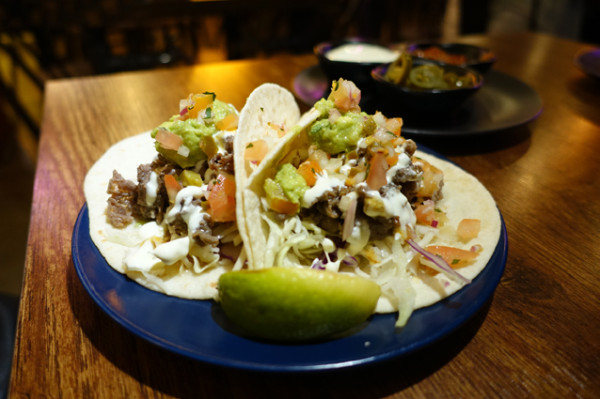 While fried chook is definitely Vecino’s main game, they also do a fine line in tacos. Bulgogi Tacos ($13.50/2) takes the classic soy-marinated Korean barbeque beef and teams it with cabbage, black beans and guacamole, under a clever two-sauce tango of teriyaki and Mexican crema. Load up your soft taco shells even further with pickled jalapenos and salsa, that are both passed separately, before shoving it in your gob for super-juicy flavour fix. 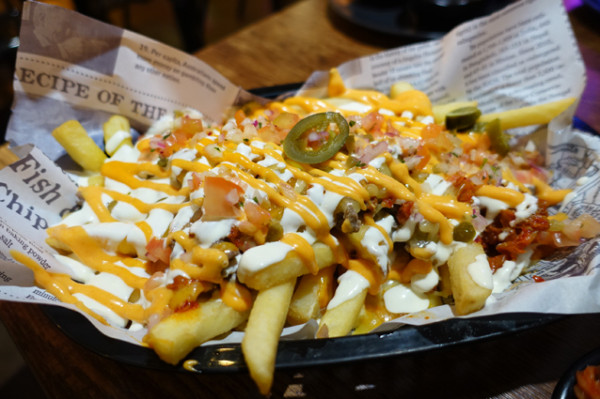 The same tender, bulgogi beef is employed on the Kimchi Bulgogi Fries ($14.90). These loaded fries were actually my meal highlight, so order some even if your fried chicken platter comes with chips. In this dish, the golden chips are decked out with a colourful mix of sautéed kimchi, tender bulgogi, pico de gallo and coriander, then glued together with mixed cheeses before being liberally lashed with sour cream and Vecino hot sauce. 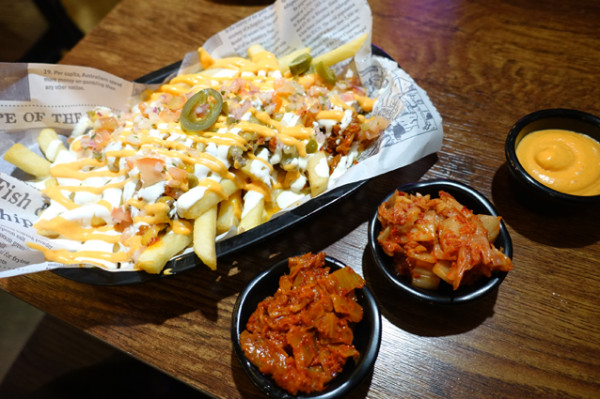 We threw in little pots of Sautéed Kimchi ($1.50), fresh Kimchi ($1.50) and Vecino Hot Sauce ($1.50) for a more authentically Korean meal. The only one I wouldn’t order again was their hot sauce – it eats like a chilli aioli, so it just wasn’t hot enough for me. Luckily there was plenty of chilli bite from the fresh kimchi. Kimchi will also help your stomach cut the fat from your chicken adventure. We opted for the Assorted Chicken ($48), which, with one-and-a-half whole birds, was more than enough food for a whole two-person dinner. The welcoming Korean floor team allowed us to customise our three types of chicken to their original gourmet fried chook, sweet spicy chicken and chimmichurri bird. 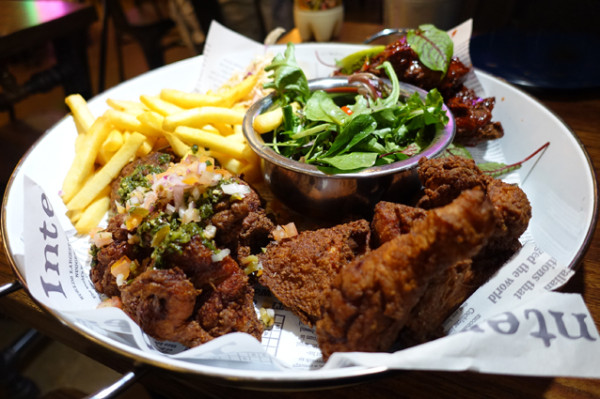 With a good squeeze of lime to balance the sweetness, the sweet and spicy was an easy favourite. Chimmichurri chook was pretty much the original topped with salsa, so I’d probably recommend you only order one or the other (there are two other types to try). The platter is rounded out with two salads where produce proved top-notch, and some chips. While Vecino isn’t likely to win an award for the best Korean fried chicken in town, I was pretty sold on the whole pub-style package, especially as it offered more Korean authenticity, better drinks and way better tunes.