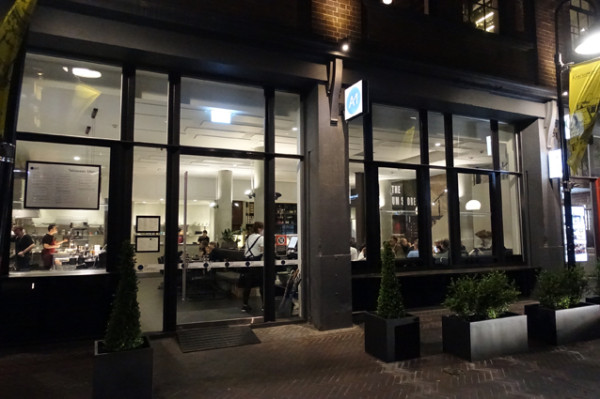 A1 Canteen is one of Kensington Street's more recent residents, opening up across the laneway from its older sibling, Automata, in June this year. 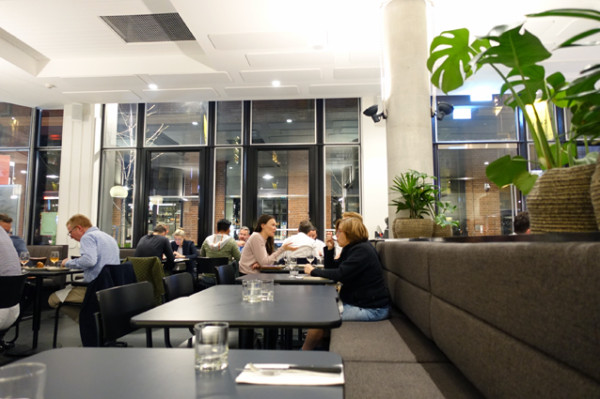 With high ceilings and lots of natural light, it’s clearly aimed at day-times. At night it feels strangely corporate, with armed black office-style chairs, laminated bluish tables with curved safety corners, and stiff grey fabric banquettes, and an older, conservative blue plaid shirt crowd to match. An oversupply of white light directs my attention toward steel and concrete pillars, and the lobby stairwell of The Old Rum Store; so maybe a window seat looking onto Kensington Street would be best? 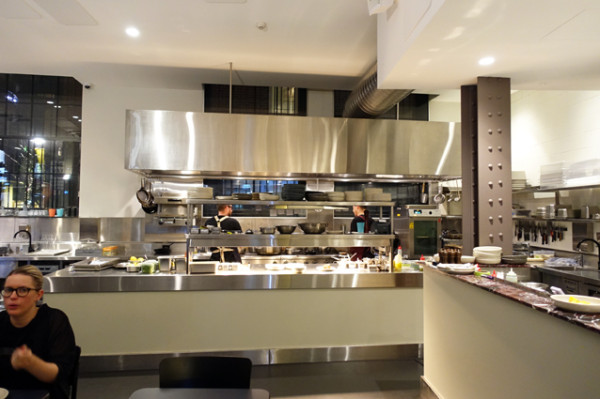 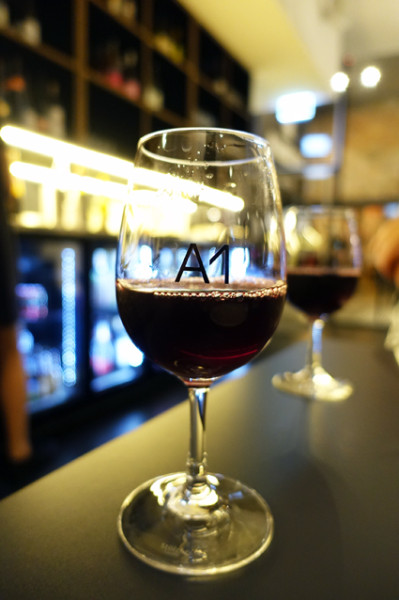 The shiny open kitchen seems to be where the money has been spent, and affords you the opportunity to watch Head Chef Scott Eddington at work. On the floor, Manager Rachael Trewin is a star, with wine knowledge for days, and enough patience to triangulate an interesting drinking adventure for two disparate and fussy wine drinkers. Trewin sees us kick off with the 2017 Claus Preisinger Puszta Libre ($75), a juicy red blend of Zweigelt and St. Laurent, made by Austria’s best natural winemaker in Burgenland. 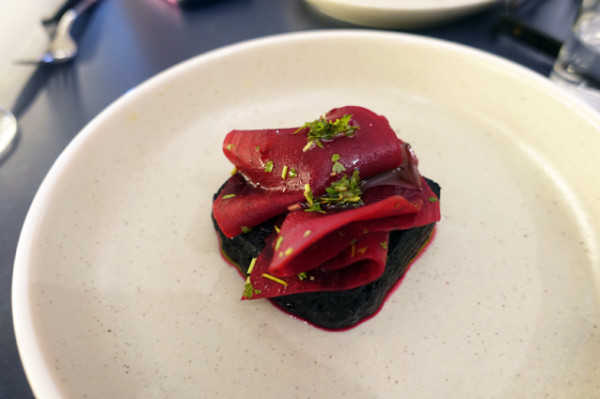 Blood Cake ($18) is friendly and accessible, particularly under rumpled sheets of sharply pickled beetroot. It’s drizzled with rosemary oil, and while slightly mealy, a good companion to our almost tingly, natural red. 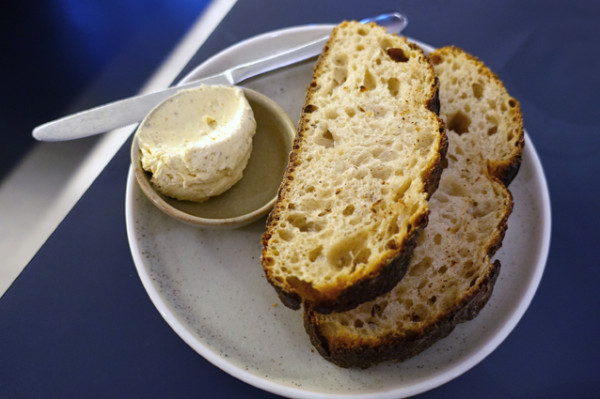 We make short work of Sourdough ($4/head) with bush tomato butter, as we sink into one of the best musical selections I’ve ever heard in a Sydney restaurant. Running from Echo and the Bunnymen’s Killing Moon to Cheryl Lynne’s Got To Be Real, to UK punk band, A Certain Ratio, it’s wide ranging, interesting, and at an appropriate volume to drown out other conversations in the potentially echoic space. 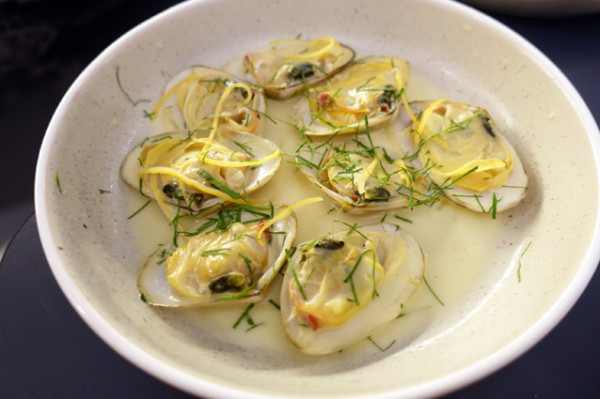 With just eight Tua Tua Clams ($26) our next dish shows that this kitchen has its food costs nailed. However it’s such a happy-making dish, you’re unlikely to care. Clean, briny and ever so slightly creamy, the tasty bivalve molluscs are presented in a delicate blend of anchovy butter and preserved lemon that begs to be mopped up with any remaining bread. “I’m glad that you didn’t waste the sauce though, I’ve been drinking it like a soup,” our waitress says as she collects our plates, and I silently curse myself for not thinking to raise the bowl to my own lips. 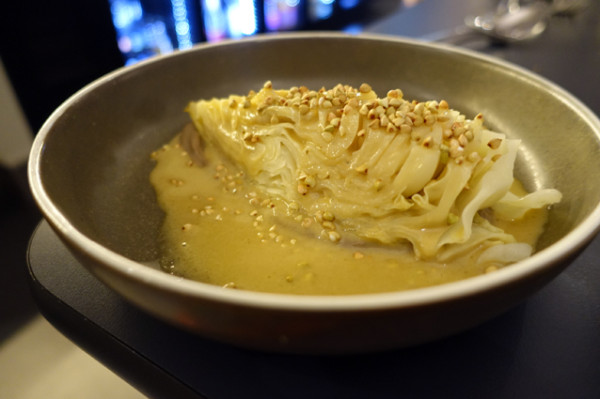 Sugarloaf Cabbage ($16) doesn’t rely upon char for flavour, instead it teams the juicy, sweet and soft cabbage with funky, salty mushroom butter and some buckwheat for texture. It’s the kind of meaty vegetarian cooking that will have you wishing you hadn’t already gobbled all of your bread. 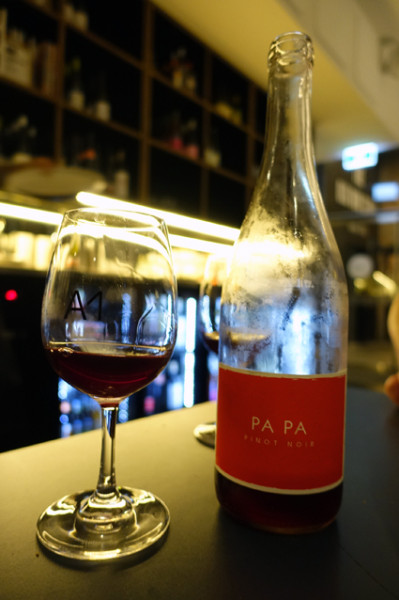 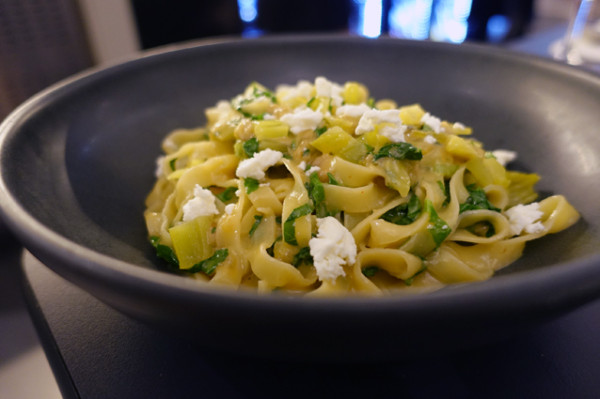 We opt to share a glass of the 2018 Xavier Papa Pinot Noir ($15) with our final dish, but Trewin gifts us with the remains of the bottle because it’s coming off the list. With raspberries and red berry aromas, the chilled and instantly likeable quaffing red is just what you want to be drinking on a warm day in the Aussie spring. By contrast, it takes me a few mouthfuls to wrap my head around the Tagliatelle ($26). With pickled and super-sour mustard greens, fermented chilli and chalky smoked goats' feta, it’s an unusual combination of creamy and sour, kind of like the fixings of a cheese plate transplanted to a pasta dish. It’s clever and quite unique, and quite indicative of A1 Canteen's whole offering, which belies the corporate-looking digs.