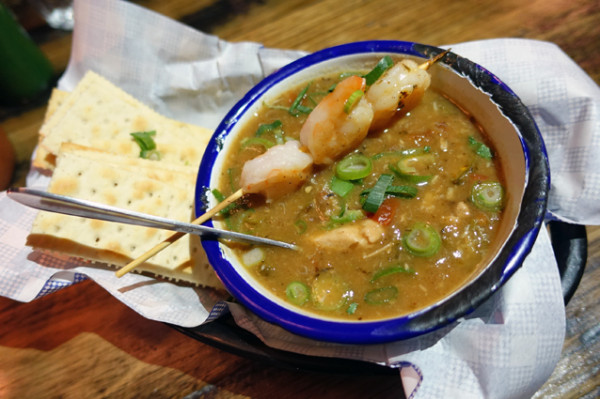 Who would have thought that crumbling Saltine crackers over a steaming bowl of Louisiana Gumbo ($18) would be one of the highlights of my recent Bathurst trip? Flavoured with the holy trinity of celery, onion and green bell peppers, this hearty Creole stew was a fishing expedition that saw us reeling in chicken, crab, pickled jalapenos and house-smoked sausage. Each mouthful was different! The stew just wanted for more heat, but with green chilli sauce happily provided, this hearty entree made me as happy as a pig in mud. 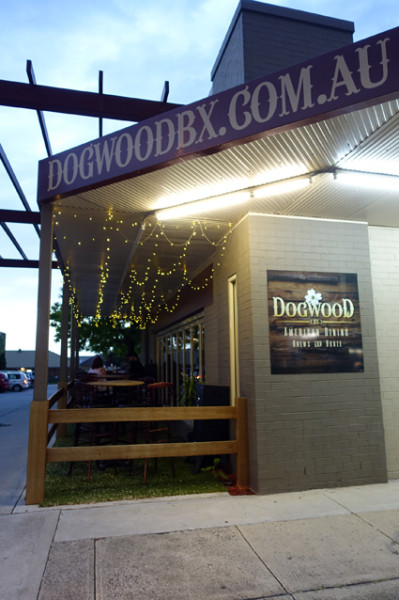 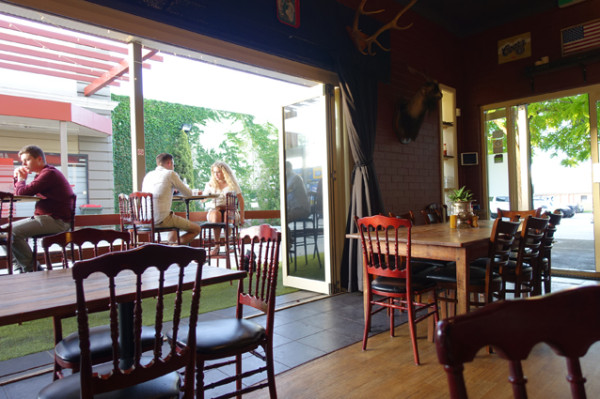 While Americana is prevalent in Sydney, it’s rarely as well handled as it is at Dogwood, BX. Cue me: dining here twice across a four-night trip. 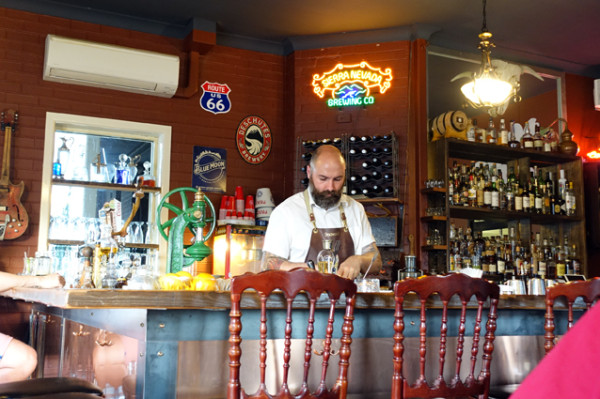 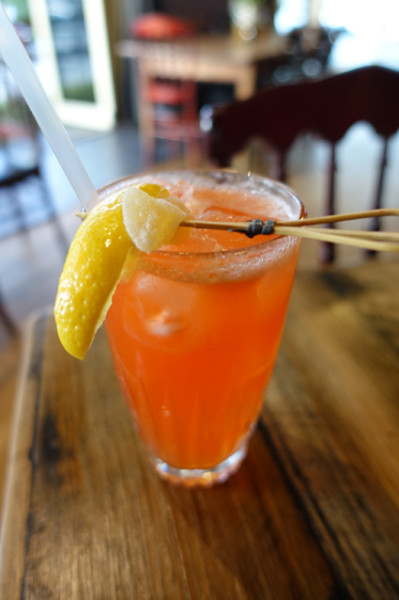 To be fair, owner (and bartender on both occasions) Evan Stanley, was a big part of the attraction. While he’s worked everywhere from Cowra to Fiji, Stanley is perhaps most famous for the fifteen years he spent in Melbourne, mixing drinks at Black Pearl Fitzroy and Le Bon Ton in Collingwood; and taking home the 2013 Australian Liquor Industry Award for Bartender of the Year. What you’ll find on his Dogwood, BX list is an intriguing blend of traditional – smash out a Sazerac for example - and bespoke, like the Empire of Dreams ($18). An ode to the American melting pot, the Empire of Dreams was created at the Black Pearl using Bacardi white rum, apricot, almond syrup and tart citrus against coffee beans for an enlivening nose. My advice? Kick off with a Kentucky Buck ($17) with strawberry, lemon and ginger beer; it’s a daytime take on whiskey if ever I met one, and will help you ease your way in. 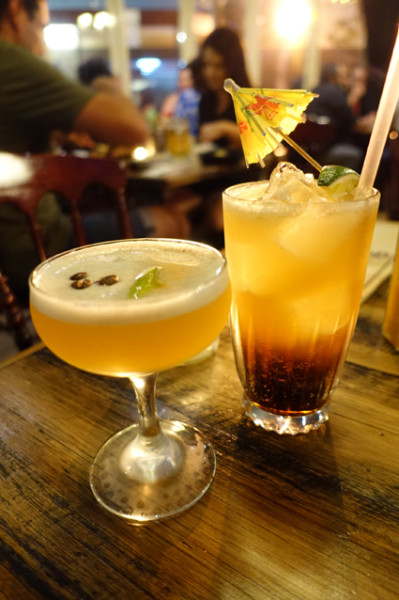 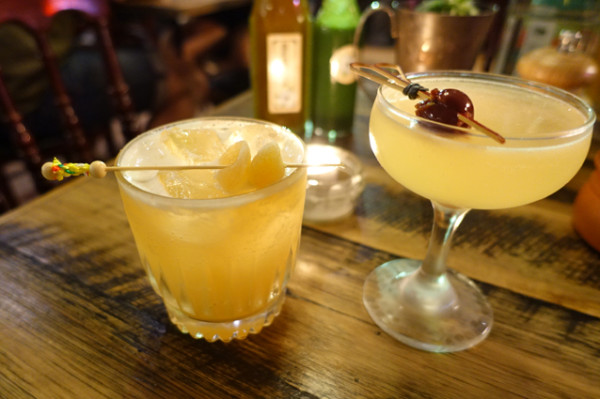 My own drinking adventure oscillated between old school favourites, like tart Penicillin ($19) represented here with particularly wonderful smokiness, and new school offerings like the Key Lime Cooler ($18). Presented as a taste of Florida, it's an easy-to-like rum, orange liqueur, spiced lime and cola concoction that should appeal to Mai Tai drinkers. While I am normally a Corpse Reviver No. 2 ($17) fanatic, I thought the version here had too much lemon and not quite enough Lillet Blanc and absinthe intrigue. 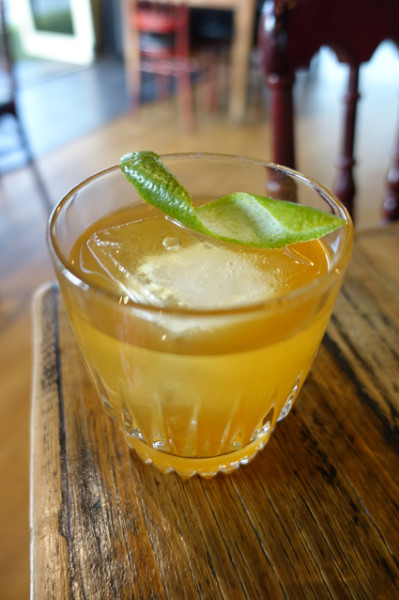 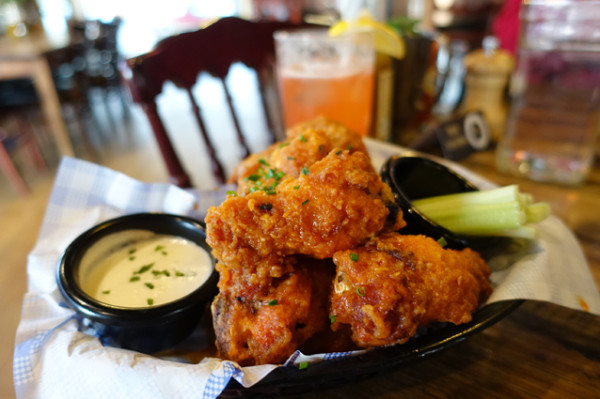 Being an island-girl at heart, I found it hard to resist the lure of the Caribbean-themed Corn‘n’Oil ($17). With dark rum, spiced lime syrup and bitters, it’s a corny, moody, throat-coating sipper topped with a perfect, pith-free lime twist. It’s the kind of drink you want to sit back and get acquainted with over a pound of Buffalo Wings ($15) while mocking Jessica Simpson, who once famously refused them saying: “I don't eat buffalo.” While I've eaten better chicken wings, the blue cheese dipping sauce here is tangy and earthy, with a big cheesy hit that whispers: double dippin' is fine. 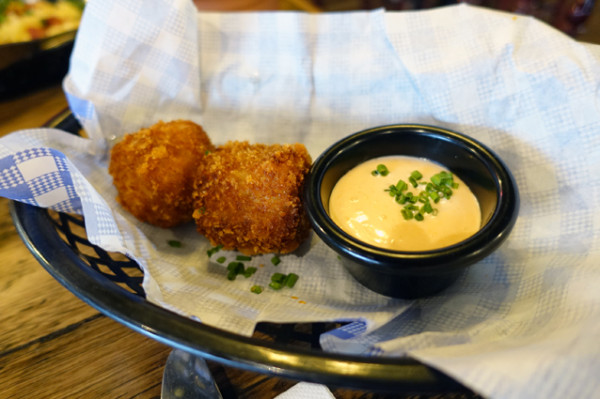 While food here comes out rapid-fire, you can circumvent the kitchen’s efficiency by ordering dishes one-by-one when you want to eat them. Smoked Rib Croquettes ($4.50/each) should be a given. Long strands of shredded rib-meat are rolled up with Mexican cheese and pickled jalapenos into crisp, crumbed croquettes that you can pop into your mouth smothered with Louisiana remoulade. 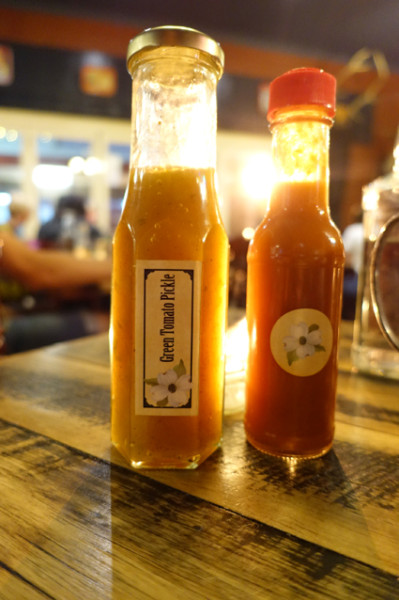 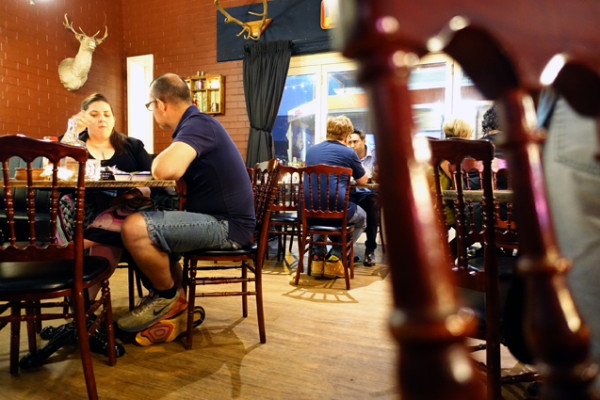 You can also dip into their chilli sauce collection – green is wonderfully hot, while the red one is more tasty. They’re bought in and re-branded, but my money is on the latter being Crystal Louisiana Hot Sauce. 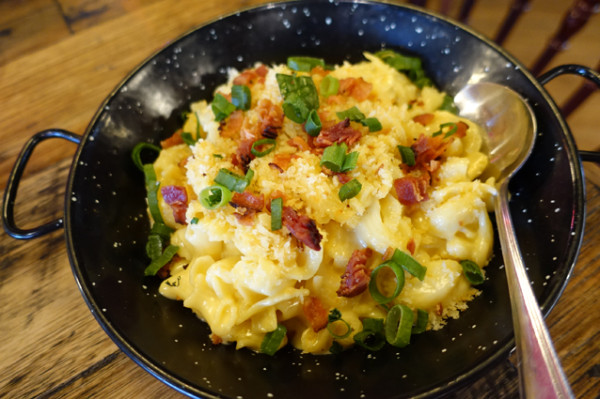 Use it to cut the fat in The Mac Daddy ($15). Dogwood, BX's house mac’n’cheese is made with three types of cheese, but somehow still manages to feel balanced and tasty rather than gluggy and artery hardening. 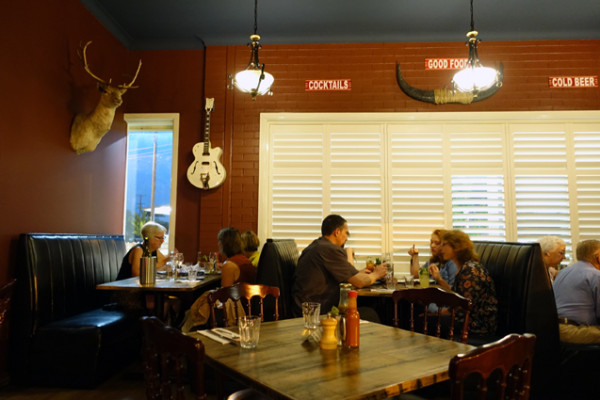 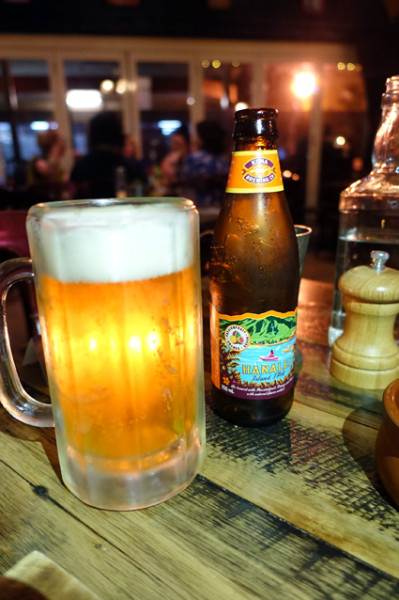 Don’t let all my talk of cocktails make you think Dogwood, BX aren't big on beer. With passionfruit, orange and guava structured with a bit of bitterness, the Kona ‘Hanalei’ Island IPA ($10) is Hawaii's liquid aloha in a glass. 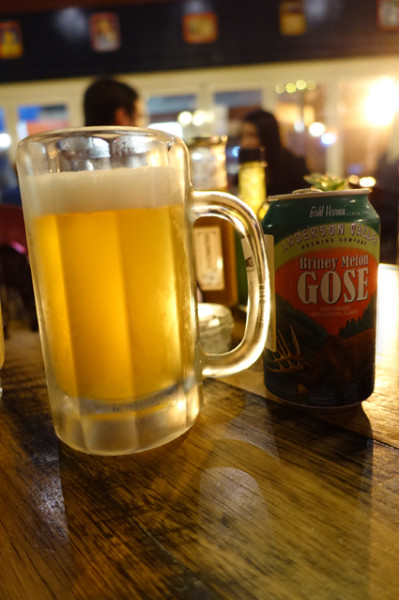 The Anderson Valley ‘Briney Melon’ ($12) is a salted watermelon gose that has Sydney summer written all over it. As such it’ll work against the Fully Loaded Wedge Salad ($22). An ode to iceberg lettuce, this simple salad is topped with charred dill-pickled chicken skewers, pico de gallo and lashings of ranch dressing with a pot of chipotle mayo. on the side. 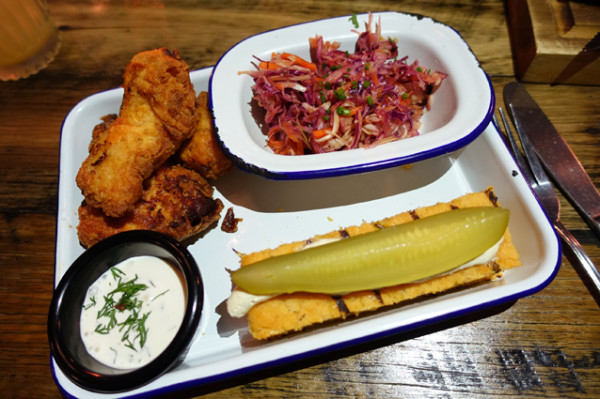 I also knocked back an English-style Brooklyn Summer Ale ($11) that was bready and clean, prefect for lubricating corn bread with your Fix Yourself A Plate ($25) enamel tin tray dinner. With crunchy (rather than oily) Southern-fried chook, grilled corn bread smeared in maple butter (and red and green chilli sauces), and your choice of salad – I picked tangy red ‘slaw – this is a great single-person dinner. 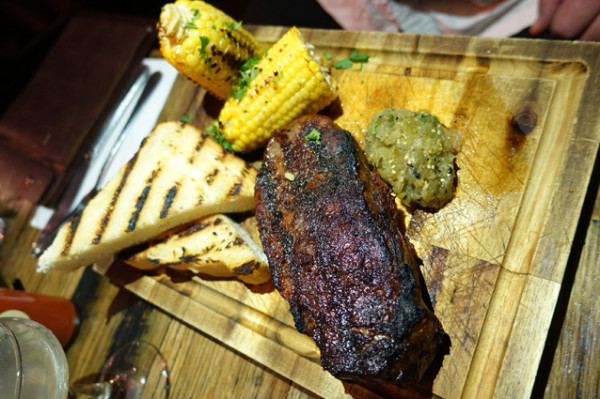 Our Dogwood experience was further improved by a wide-reaching soundtrack that went everywhere from The Pixies to Louisiana Delta blues to the early Rolling Stones. With corn juice running down our fingers we bobbed along to Hayseed Dixie’s version of Highway to Hell before tackling the 400g New York Strip Smokehouse Steak ($38). Blackened well on the outside, but juicy and pink within, it’s a great advertisement for pit seared beef. The char suits tomatillo salsa verde, and you can mop up any juices with the accompanying triangles of grilled bread. 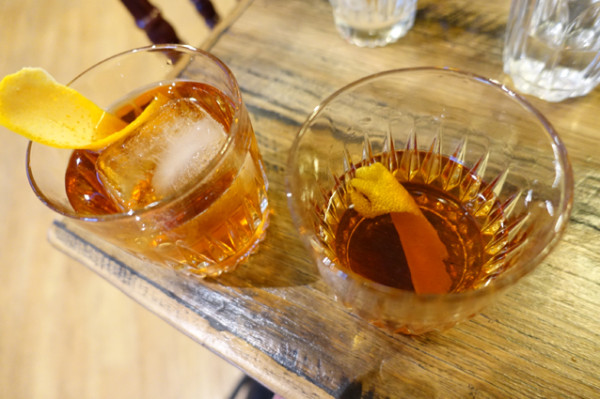 At the end of the night, your go-to sippers are the French Quarter ($19) a very well balanced drink dirtying up whiskey, cognac and sweet vermouth with Benedictine and Peychaud’s bitters. It has echoes of my favourite whisky cocktail, the Rapscallion. The Woodford Reserve Old Fashioned ($20) centralises artisan bourbon with spiced bitters and aromatic orange fruit peel for a fruitcake finish to the smooth, butterscotch-like bourbon.

If gumbo, great drinks and well chosen tunes don’t send you back out into the world smiling, nothing will.