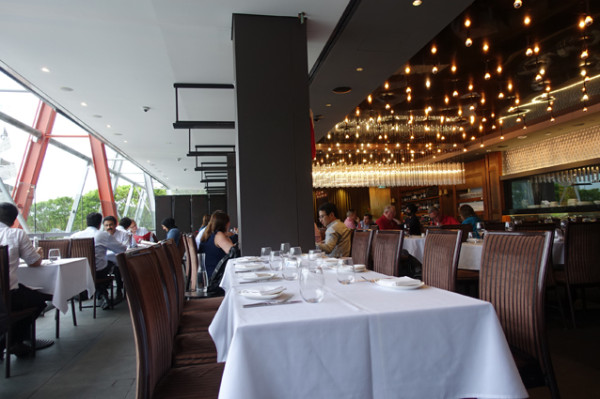 Much more than just a prominent waterside location, Manjit's @ The Wharf builds upon the success of the restaurant group’s Balmain stalwart. It’s the first time I’ve been back since attending their launch dinner in February 2016, and to my palate, this restaurant is eating much better than it did on that occasion. 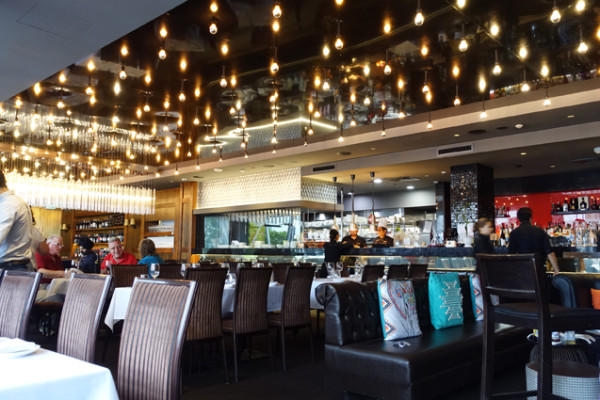 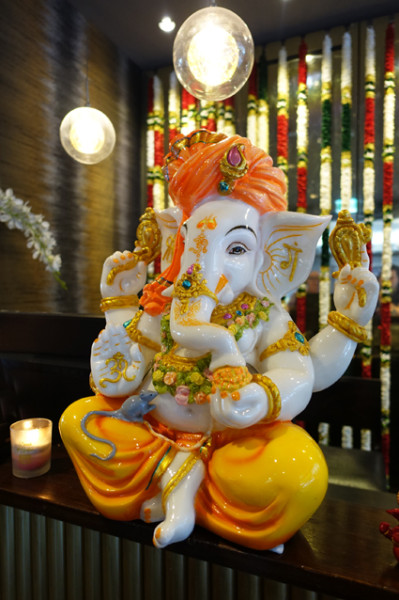 Growing up here in Australia eating his parents’ Indian cooking, Head Chef Varun Gujral brings to the table both an Indian palate and an Australian sensibility. 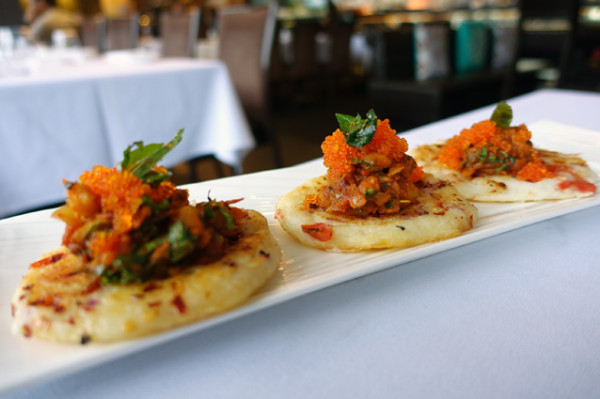 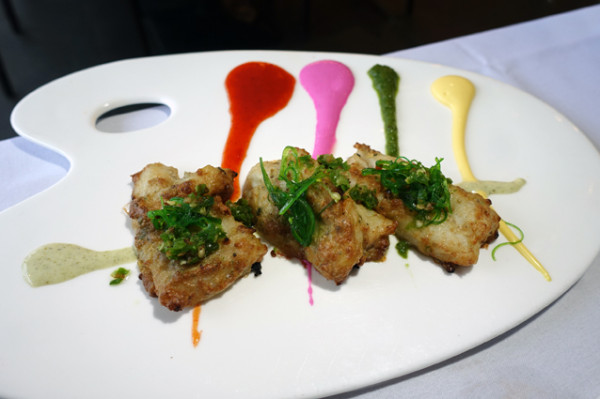 Without imli (tamarind chutney) the palette of Fish Malai ($16) is presented with slightly less artistic flair than last time, however it’s hard to complain when there’s so much kick in the colourful chutneys. Tender ling fillets are great vehicles for sampling combinations of these condiments, each of them so central to Indian cuisine. 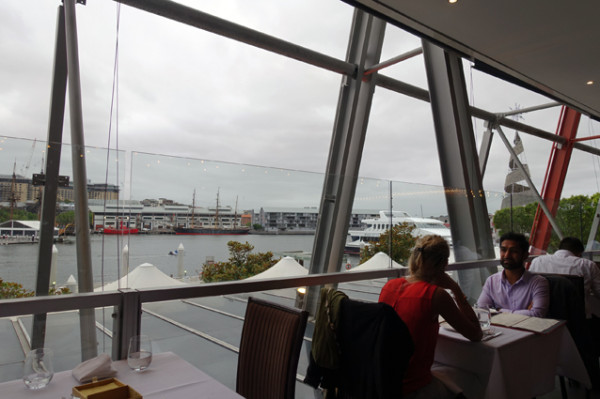 As the restaurant fills up around us on this grey and moody Tuesday evening, we move onto Banjarra Tikka ($16). Think of this as your modern summery tandoori chook, just painted in sunny yellow rather than red through the use of yoghurt and amchur powder made from dried, green mangoes. With delicately charred tips, the moist, chicken fillets are bright, sour and enjoyable against a lemony, coriander and cauliflower puree. 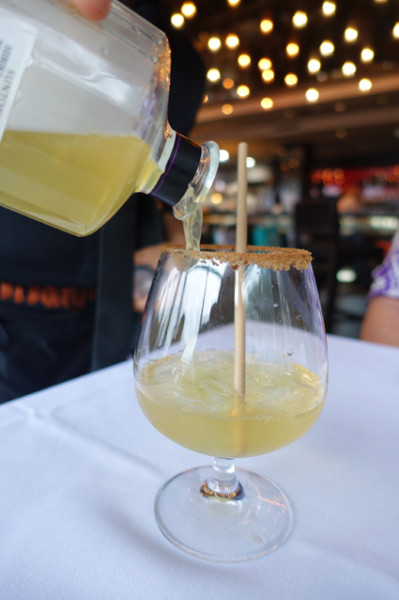 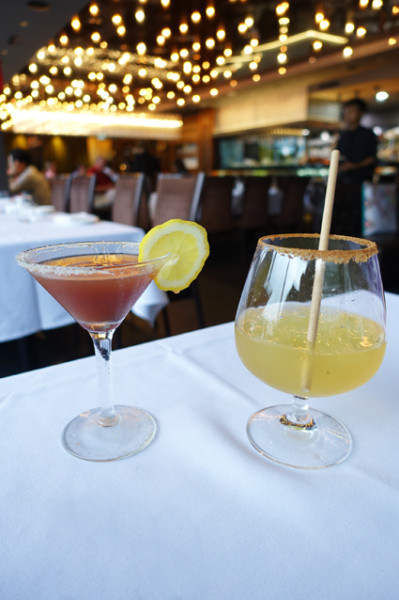 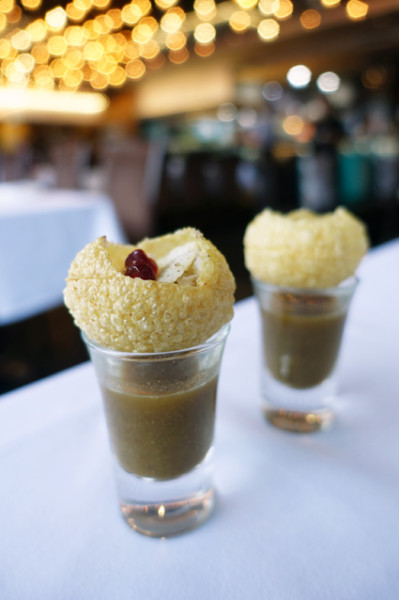 Against this barrage of entrees we hit up the cocktail list. It’s a delightful surprise to find that not only are the cocktails thematic, they’re also well-thought-out and balanced. I find it hard to choose a favourite between the round and enjoyable Imli Margarita ($18) that integrates tamarind, lime and tequila with just enough chilli to make your lips tingle, and The Smoking Napali ($18). Poured at the table in a whirl of smoke, the latter is a flashier affair that combines Nepalese Khukri Rum (who even knew Nepal has been making this dark oak-vatted rum since 1959?) with honey, fig and cinnamon, balanced by lime. It drinks like a steam train with a faintly medicinal quality, a bit like the classic Penicillin, against a sweetly contrasting rim. Both cocktails are so good, I only barely register pouring pani puri water into our crisp Gol Gol Gappa ($16/4) - there’s just a faint memory of spicy chick peas, tamarind and semolina crunch when I try to taste it again in my head! 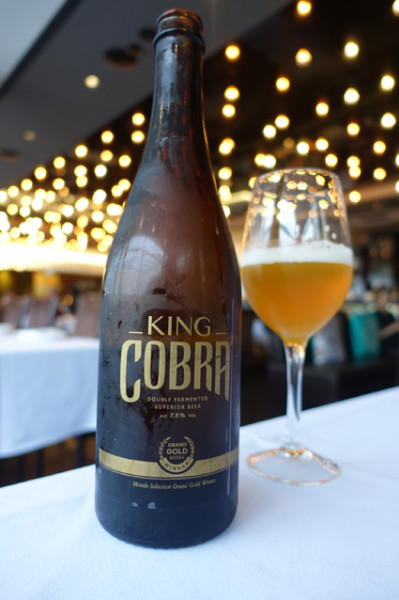 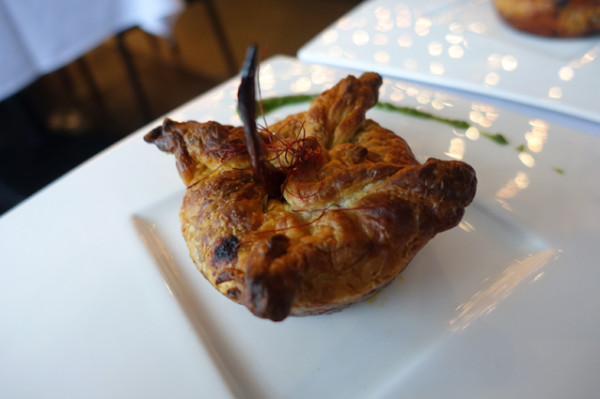 We move onto beer – King Cobra ($23/750ml) a double-fermented pilsner style lager that Varun has secured exclusive rights to for the next few months – to accompany a Beef Vindaloo Pie ($15). This is where you can really see his Aussie-Indian hybrid at play, with an authentic beef vindaloo curry encased in buttery puff pastry. Dilbahar Tikki ($14) is another great hybrid exemplar – this quartet of highly worked potatoes (basically the insides of samosas mixed with beetroot powder and lentils) eat like late night fun in an Aussie-Indian home kitchen. 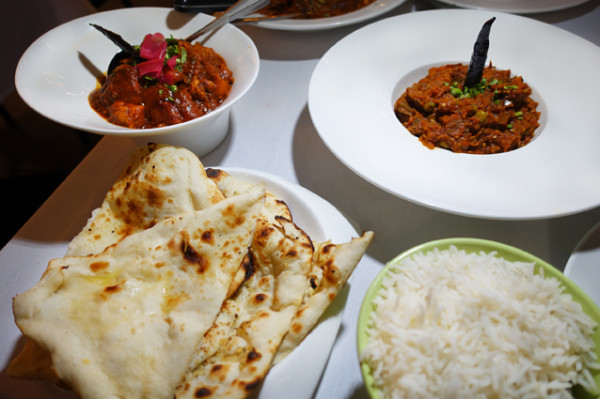 Pausing between our entrées and our curries, I’m taken aback by the ethnic, cultural and religious diversity in the room. From hijabs to turbans, the clothing demonstrates that the restaurant is home to all manner of people, arriving to dine as couples, with work colleagues, their families or friends. 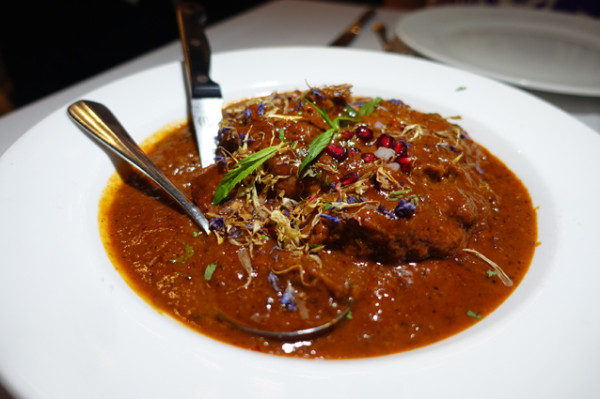 The centerpiece of our curries is the Lamb Shoulder Anarkali ($42). It’s a modernisation of Balmain’s ‘hadi walla’ lamb, North Indian in origin, but made contemporary with quality lamb shoulder presented on the bone against the brightness of pomegranate and molasses. The gravy is glossy and rich with beautifully rendered lamb fat, making it easily my dining companion’s favourite dish. 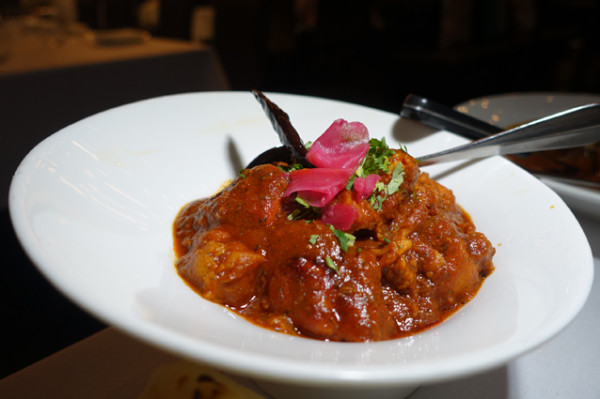 With my own family history including members of the British Raj, it’s perhaps unsurprising that I’m more taken with the spicy Chicken Madras ($27).It reminds me of the white bread chicken curry sandwiches I used to be teased about taking to school. 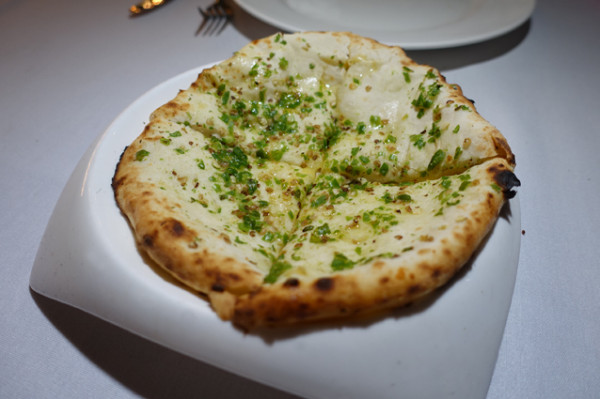 Bright red from the heavy use of chilli powder, and particularly excellent in combination with the Signature Manjit's Naan ($7.50) stuffed with garlic, paneer and spices, this curry is (on request) hot and a little bit fruity (tamarind). 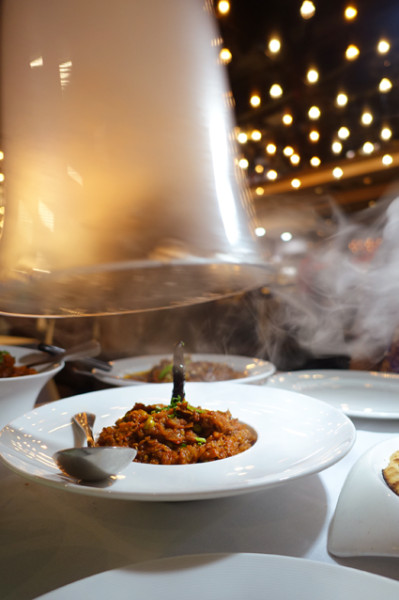 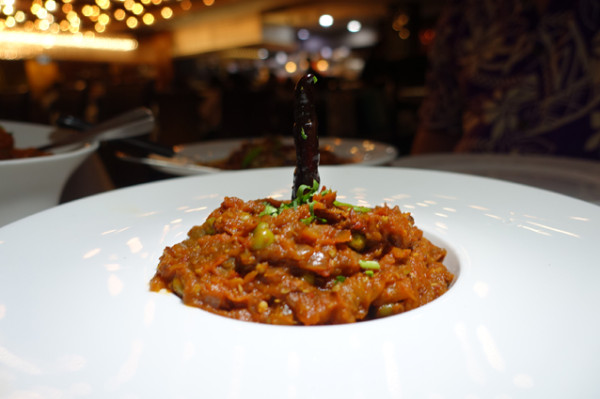 With Baingan Takatak ($22) presented in the same smoke-filled glass cloches as the ones used at Manjit's Balmain, it’s impossible not to make a comparison between the two restaurants. This version has more coal-smoke flavour, but it’s heavy-handed with the tomato so it loses the eggplant somewhat. 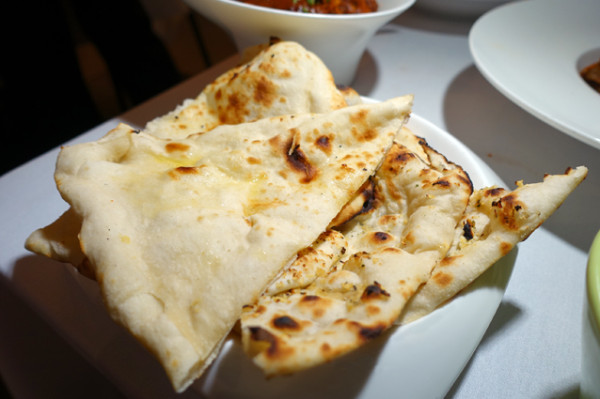 I found more delicacy in the cooking at Balmain, and more clarity in the curries, though naan are definitely better handled here at King Street Wharf. Staff at this restaurant lack the confidence of those at the Balmain original, speaking too softly when introducing dishes - though honestly, I’m splitting hairs – both restaurants really deserve your business. 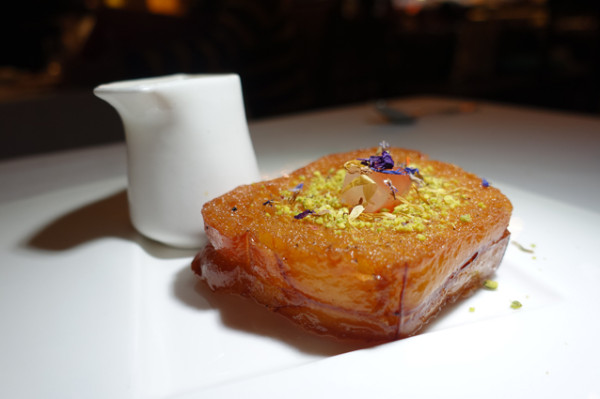 Finally, while the menu here has been largely unchanged since opening, Deconstructed Shahi Tookra ($17) is the new addition you have to eat. 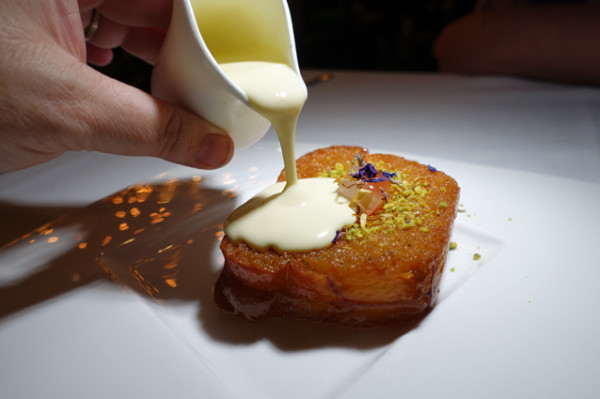 Reminiscent of Spice I Am’s Better Than Sex, taken to the Indian subcontinent, this is bread’n’butter pudding cooked in sweet, buttery ghee, offers up all the flavours of a gulab jamun (evaporated milk, cardamom, rose water, pistachio) when you pour on the creamy, saffron milk reduction. It’s super rich, sweet and decadent, so you probably only need one to share to end your night on a considerable (sugar) high. 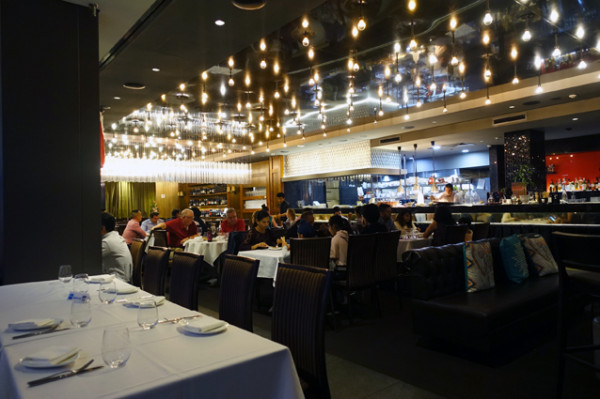 NOTE: You can see a review of this restaurant when it first opened HERE.