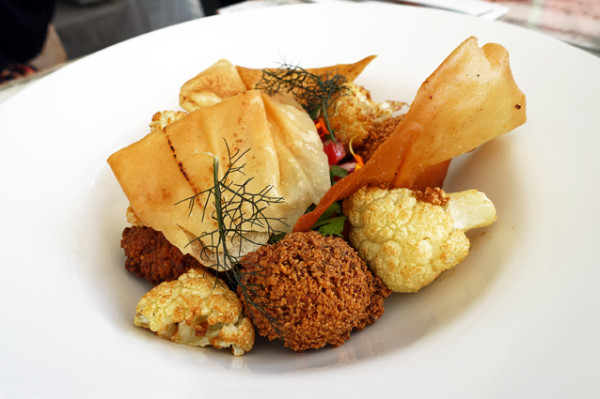 “When there are local people doing awesome things, we use them,” barista Carlos Ojeda Nino says, as he places Bellbird Dining's House Made Falafels ($15) before me. The dish plays homage to local artisan maker, Hammoud 1, by using their excellent falafel mix, cooking the crisp spiced chickpea balls in-house with fried cauliflower florets, before presenting them with lightly pickled red onions, tangy labneh and golden shards of crisp bread. 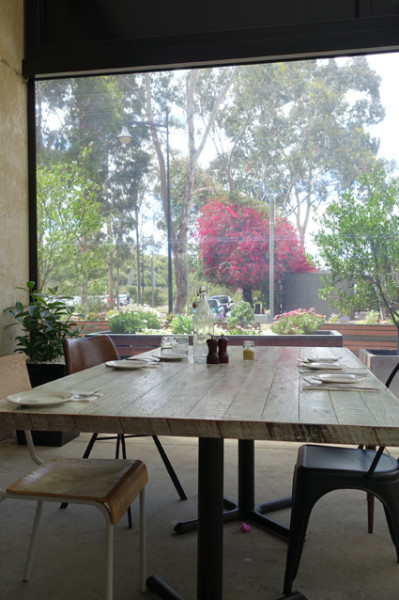 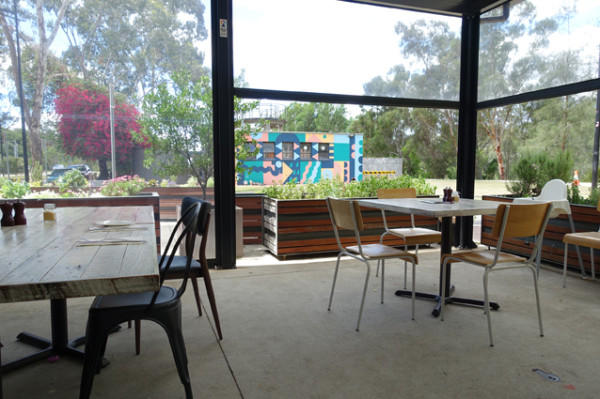 The new enclosed awning has expanded the table space at this riverside eatery located inside Casula Powerhouse Arts Centre. However the increased space has also come with an increase in Bellbird Dining’s popularity with local residents and visitors, so it’s advisable to book. 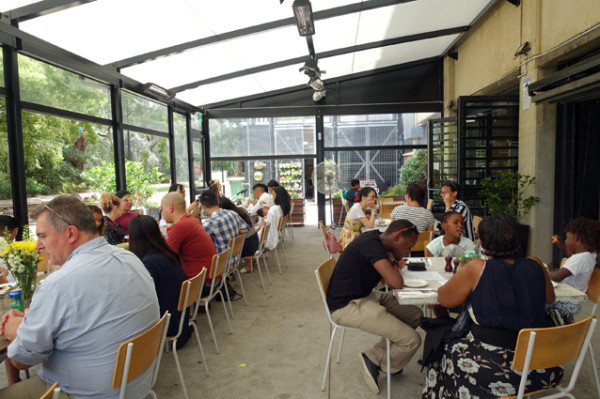 It’s easy to see why the multiculturally diverse crowd flocks to this pretty, light-drenched setting with its succinct, well-priced menu where no dish is more than twenty bucks. 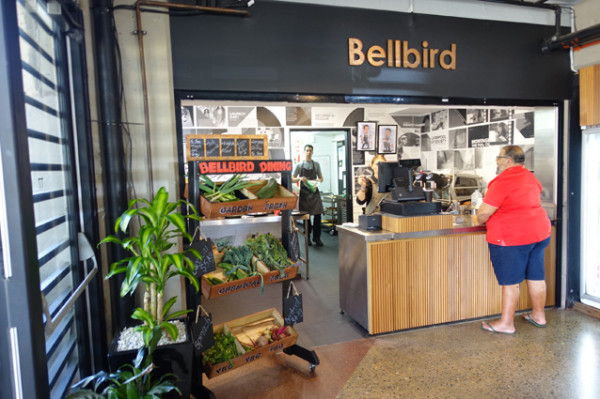 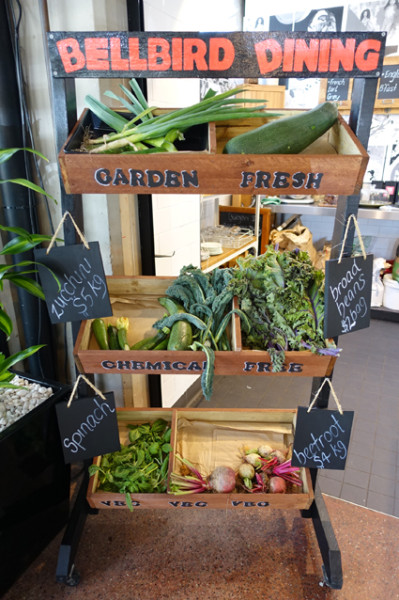 Part of the attraction is Bellbird Dining’s abundant kitchen garden, which now produces more vegetables than the kitchen can use. You’ll find them selling the excess to visitors for a very reasonable price in a wooden stand right by the counter. 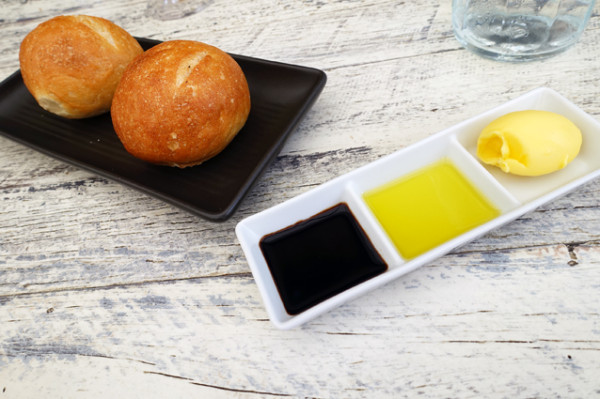 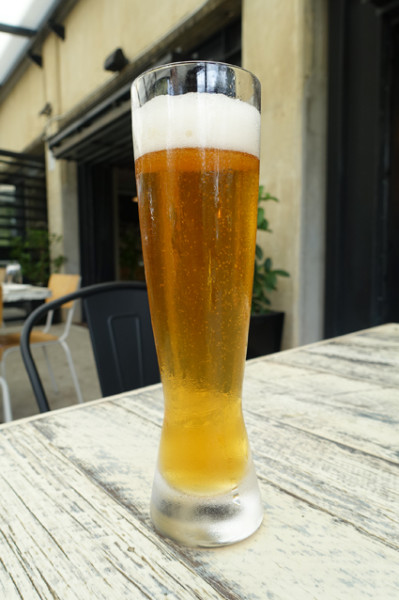 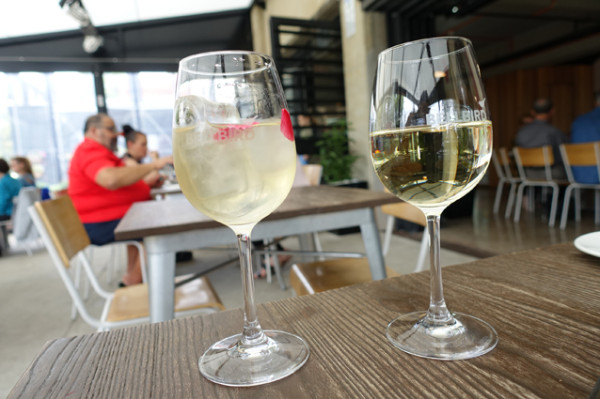 The drinks list might be short, but across the cocktails, wines, ciders and craft beers, you’ll find plenty to tempt you, including a number of drinks sourced from the local area. Chop Shop Pale Ale ($9) is made by Stockade Brewing Co. who started brewing beer in nearby Smeaton Grange. It's a super hoppy, pretty beer with pleasant bitterness – just the ticket for quenching your thirst on a hot day in this dining room's flowery surrounds. For those that prefer something other than beer, the 2015 Artemis Riesling ($7/glass) from the Southern Highlands is a daytime drinker with good acidity that suits the cooking, or there's Sydney Calling ($12) a grown-up gin cocktail with verjuice and honey made by Archie Rose Distilling Co. in Rosebery. Bellbird Dining serve it up with plenty of ice and edible blooms grown in the garden wall right by the kitchen. 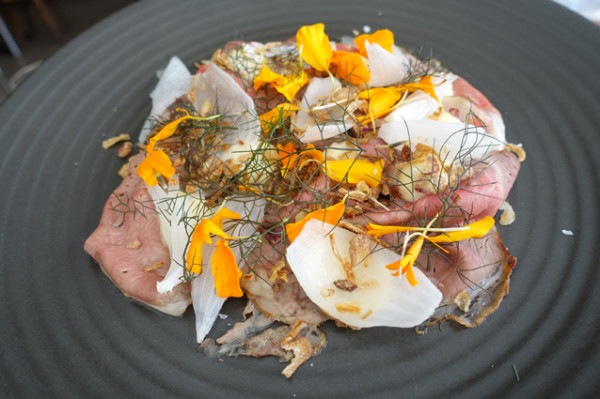 Across a couple of visits, I’ve worked my way through Bellbird Dining’s complete menu. While it does shift weekly according to what’s plentiful and in peak season, you can always expect to find five or six meat or seafood-based dishes, four vegetarian dishes and a handful of sides. Smoked Black Angus Sirloin ($20) was an easy favourite, with slices of house-smoked beef, cut super fine on the deli slicer, teamed with garlic aioli, fennel, flowers and different textures of onion on the well-presented plate. 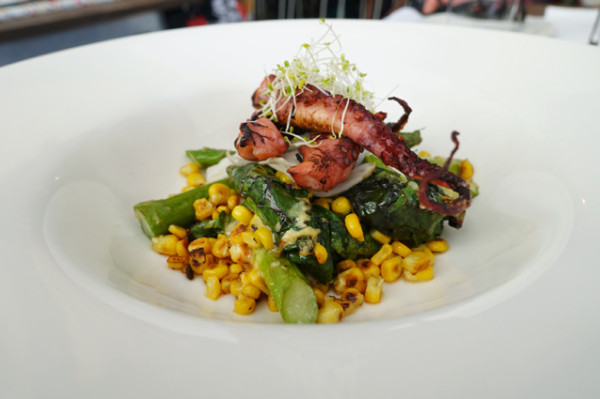 A glut in asparagus from the fertile kitchen garden was employed in Sous Vide Fremantle Octopus ($20) on one visit, and with a generous slab of Eco Farmed Roasted Pork Belly ($18) on the next. 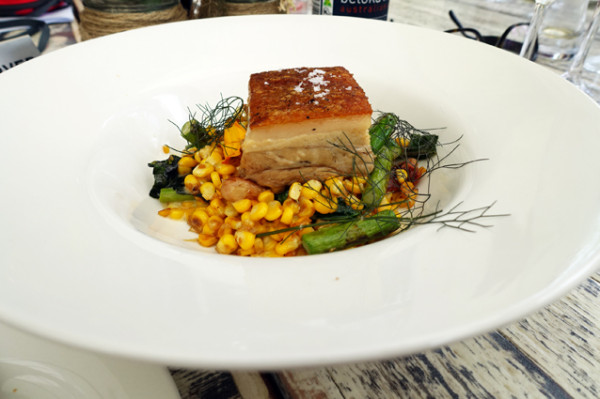 Both proteins shone against the bed of charred asparagus and juicy blackened corn kernels, united by sesame dressing, so I’d be hard pressed to pick a favourite - perhaps the well-rendered, crisp skinned pork belly set off by more fennel leaves by a nose. 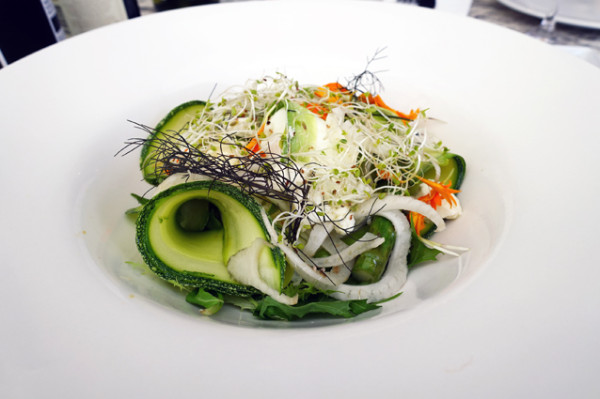 Charred Asparagus ($15) also made its way onto the vegetarian menu with poached free-range eggs, chalky goats' cheese and long ribbons of juicy zucchini. You can really taste the difference that having the kitchen a hop, skip and a jump away from the garden makes in this dish. 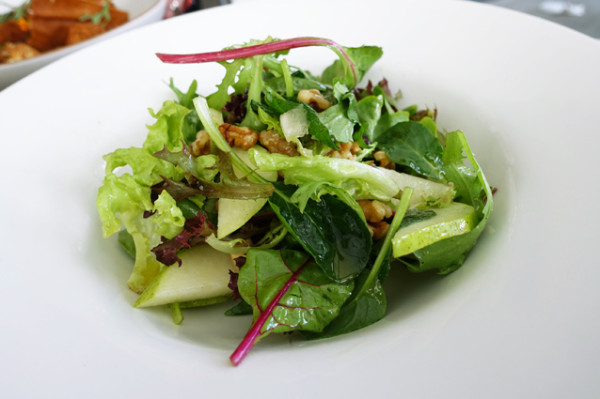 It's also evident in the Pear, Walnut and Apple Cider Dressing Salad ($5) side that I ordered on both visits. The springy, vibrant green leaves on offer here for the princely sum of five bucks leave most restaurant salads in the dust. 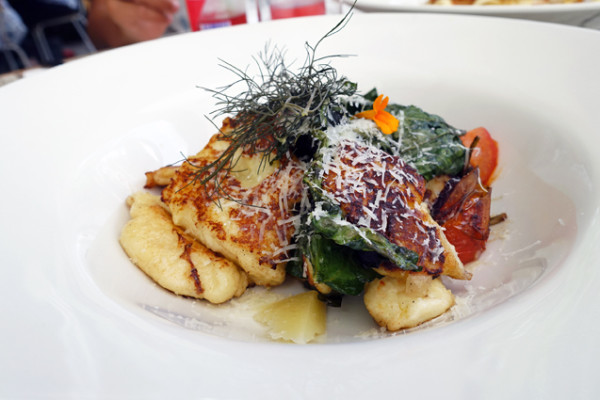 The only dish that didn’t quite live up to expectations on this visit was the Handmade Ricotta Gnocchi ($16). Rather than little lumps, the ricotta dumplings had spread into slabs of golden fried cheese, perhaps due to the hot and steamy weather. Against smoky eggplant, kale (from the garden) and blistered cherry tomatoes however, the gnocchi did eat better than it looked. 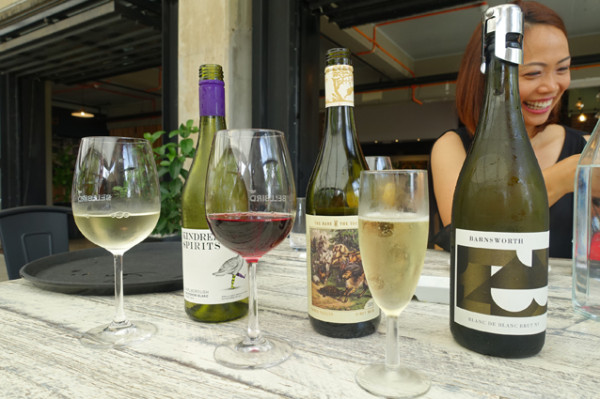 While at these prices it is easy to sit back and kill a few bottles of wine, if you take a peek in the five galleries, you may discover that Bellbird Dining’s head chef, Federico Rekowski, is talented in more than one arena. 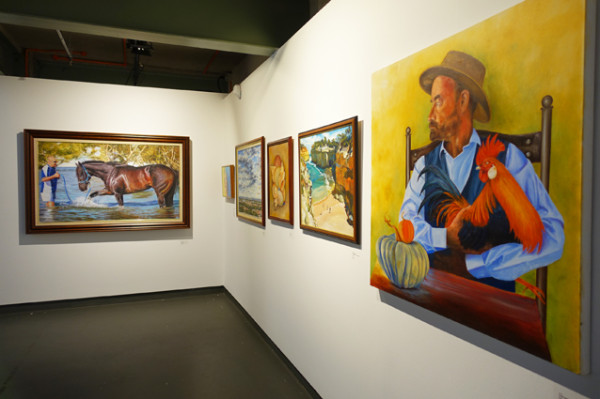 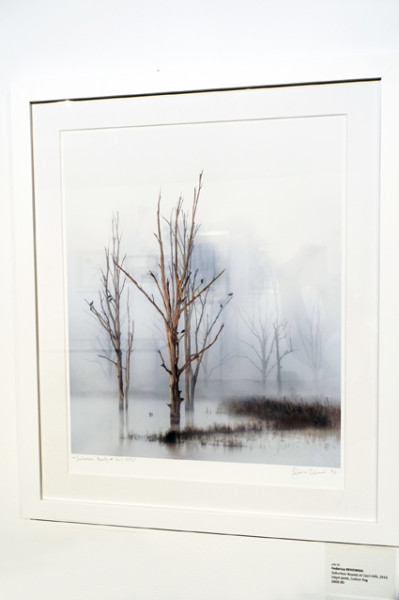 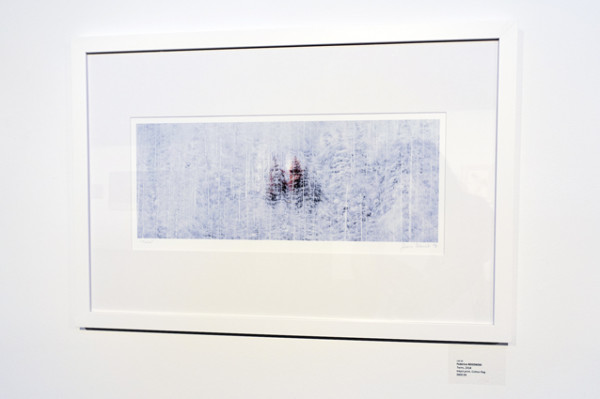 Those with a keen eye will spot two pieces of Rekowski’s moody and evocative landscape photography – Federico is clearly fonder of cooler weather. 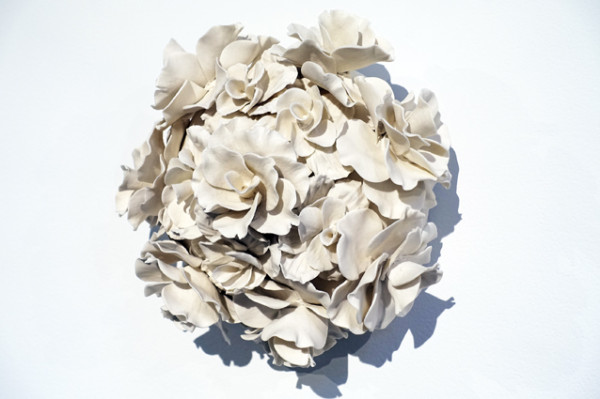 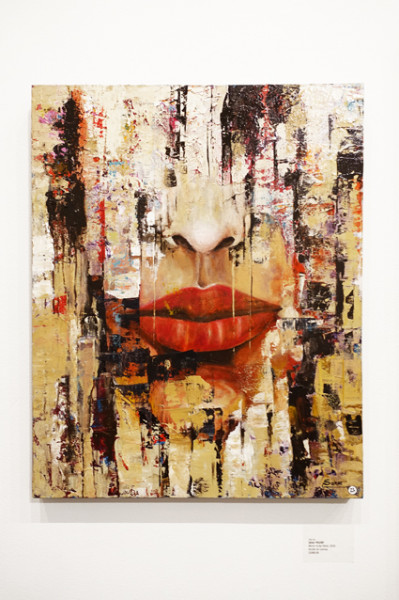