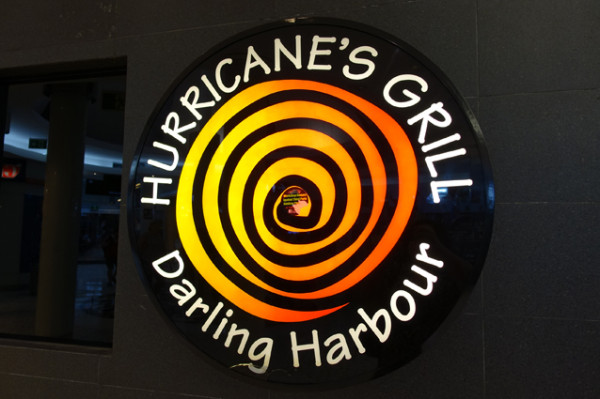 With the city blanketed in cloud, I left my comfort zone to go eat meat in Darling Harbour. 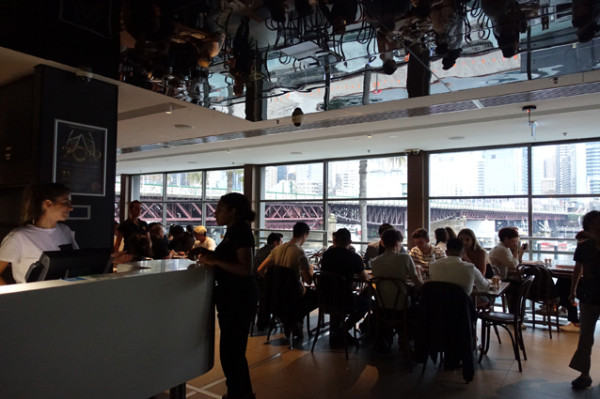 Hurricane’s Grill made its name at a fledgling restaurant in Bondi Beach. People have flocked there to eat their famous ribs since 1994, so it feels remiss of me not to have visited. 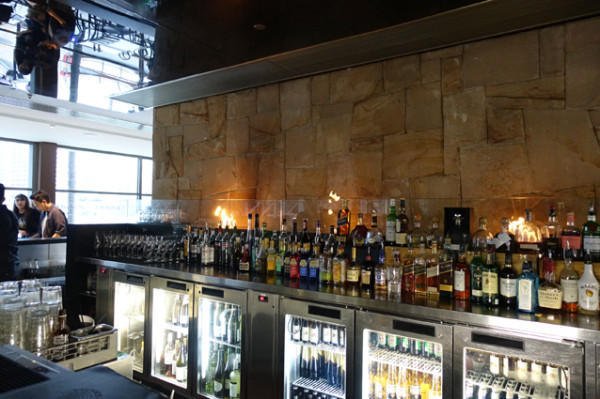 The Darling Harbour outpost was opened a decade ago in 2008. It has aged well by keeping the epic view of the CBD skyline central to the glass-box décor, which also employs lots of flames. 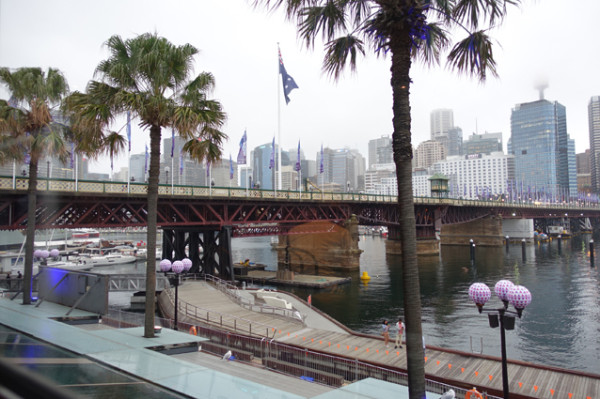 With the city whiting out almost completely while I dined, the trenches of dancing flames held more interest than the floor-to-ceiling windows and the open-air balcony. 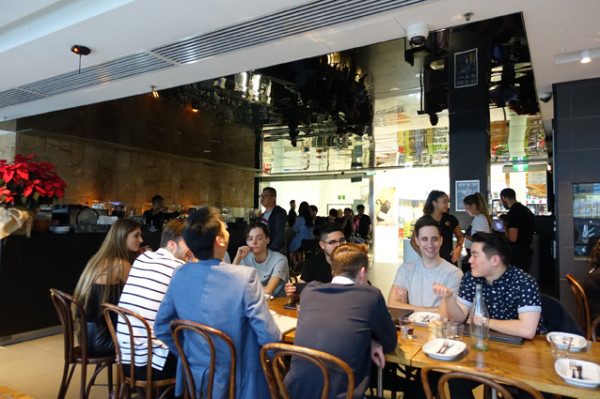 Hurricane’s Grill is all about ribs, bibs and bro’ culture. 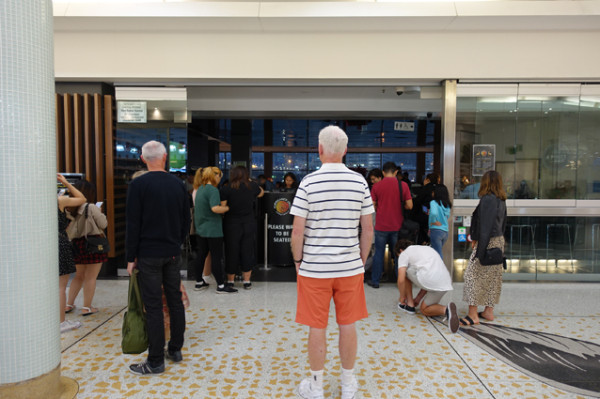 It’s loud and confronting, with a queue outside, and long tables of mostly men with booming voices within. Tables for two seem to be in much shorter supply than they are at most restaurants I visit. 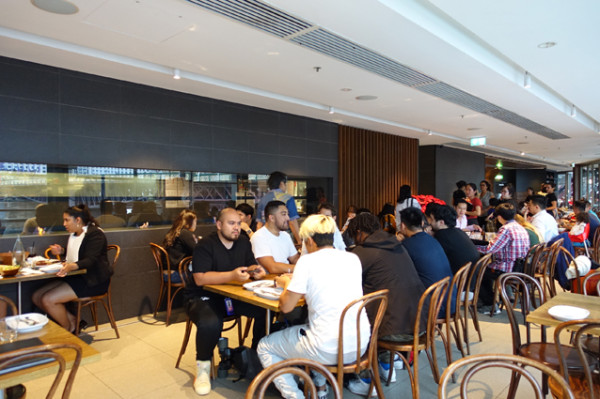 When heaving platters of meat arrive it’s intriguing to watch these tables descend into silence, and beads of the meat sweat begin to form upon furrowed brows. 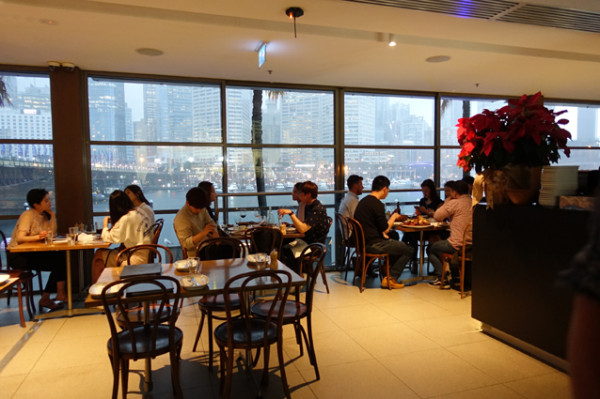 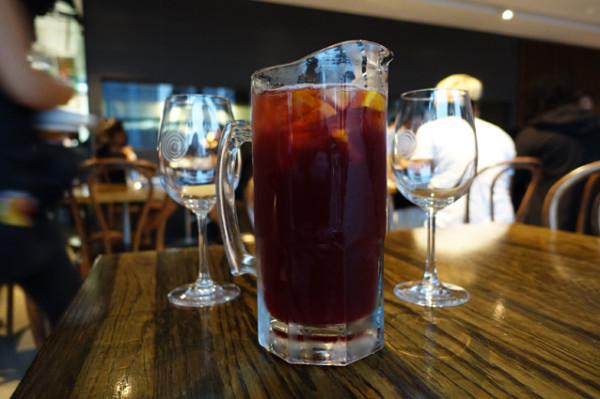 With the wine list not being very exciting, and the beer list too mainstream for a crafty drinker like me, I hit up Sangria ($40) served only by the jug. Your forty buck spend will deliver you four glasses filled about two-thirds of the way to the top with summery, light sangria made using gin, red wine, brandy and two kinds of vermouth. 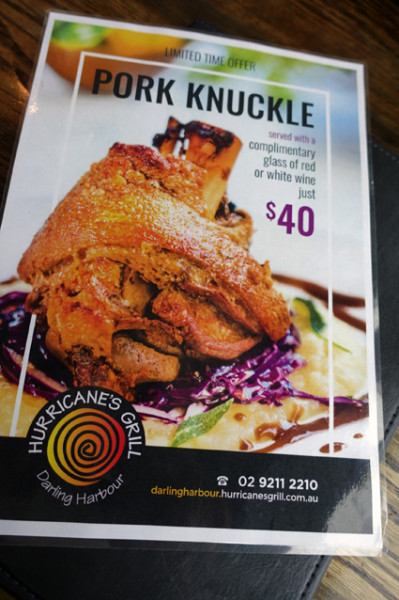 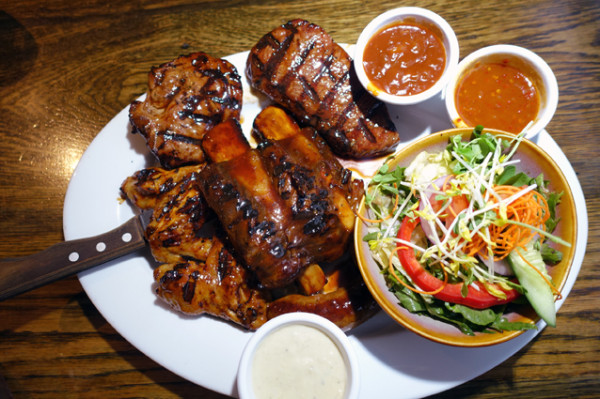 Being newbies we pass up the tempting Pork Knuckle ($40) special in favour of the Hurricane’s BBQ Meat Platter ($55/head). Presenting five different types of meat and one side for each participant, it’s a good way to taste across the menu’s main meats. The standout are the beef ribs with their signature, dark and fruity sauce, well-rendered fat and meat that falls off the bone. With the original idea for Hurricane’s Grill being based upon a South African steakhouse, seeing boerewors wasn’t a surprise, though I didn’t expect them to be a small straight sausage rather than the usual coil. It’s finely grained and accessible, though to make it really sing you’re going to need to order Monkey Gland Sauce ($3) – a fruity and tangy South African barbeque sauce. Our 200-gram top sirloins, both ordered medium-rare, edged more towards medium despite the platter arriving super quickly. They’re basted the same way as the lamb loin chop that accompanies them, which can get a bit same-same as you wade through all the meat. Sauces are your salvation, though none actually come with your initial platter spend. 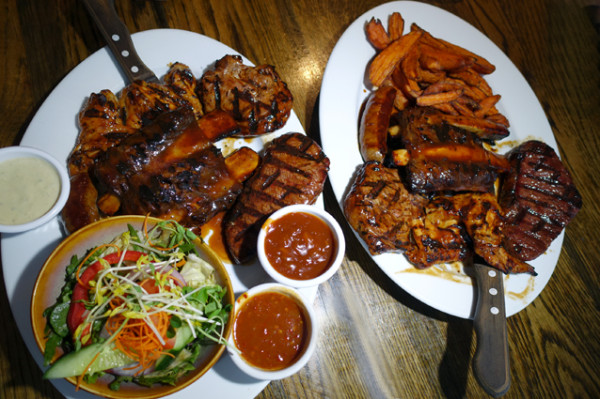 With your barbeque-basted chicken wing, I’d normally suggest Peri Peri Sauce ($3) but I found the Hurricane’s rendition too tomato heavy for my liking. Blue Cheese Sauce ($3) on the other hand, is really good, so long as you like it heavy on the fried garlic powder and light on pungent cheese. I found it worked a treat on both the chicken and the sweet potato fries. The side salad was a bit lacklustre, but I’m guessing nobody comes to Hurricane’s Grill to eat salad. 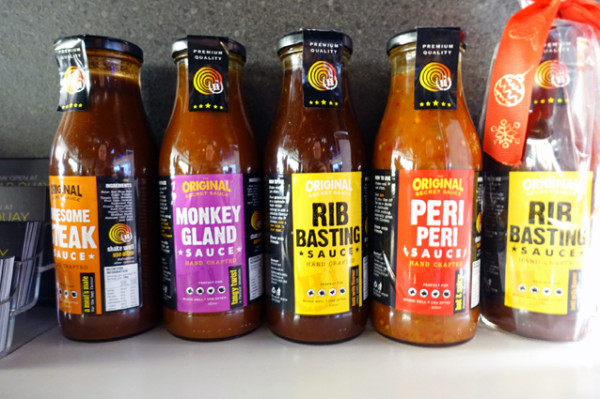 And say you did find yourself falling in love with a Hurricane's Grill condiment, never fear, everything from their signature rib baste to the South African Monkey Gland sauce that went so well with the sausage is available in bottles to take away.