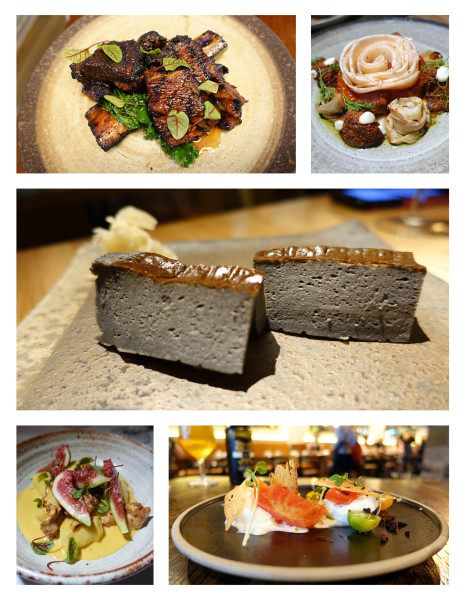 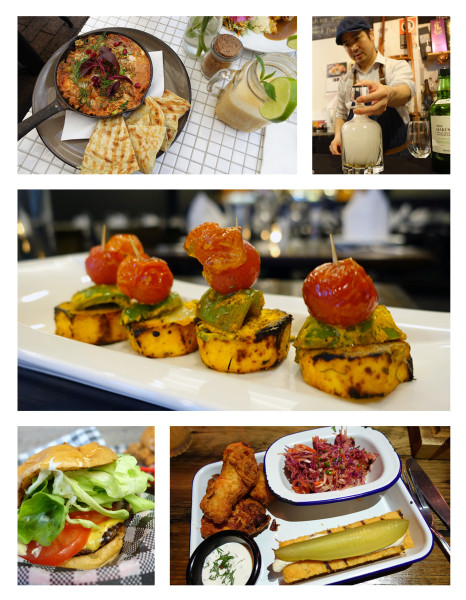 In 2018 Does My Bomb Look Big In This? presented you with 250 different pieces covering restaurants, cafes, clubs, bars, pubs, events and produce located in 91 different Sydney suburbs. This is no mean feat when you consider this blog is currently the work of a single writer! When you consider 42 (16.8%) of those reviews were drawn from rural and regional areas, you’ll get some idea of the sheer number of kilometres I covered on the hunt for good food.

Best Rural and Regional
Across 2018 I rediscovered Terrigal and other parts of the Central Coast; areas that are right on Sydney’s doorstep with wonderfully uncrowded beaches and an emerging foodie scene. I travelled across the state dining everywhere from Cabarita Beach in NSW’s farthest northern reaches, to Canberra in the south, with a few dives into western NSW to places including Bathurst, Orange, Oberon and Scone. While I remember the meals that I had at Lolli Redini in Orange, Town Restaurant & Cafe in Bangalow, and Paper Daisy in Cabarita Beach with particular fondness, it was Raku in Canberra that produced my most notable out of town meal in 2018. It's contemporary Japanese in a moody, minimalistic setting in the middle of Canberra's main shopping district. Along with these eyecatching and textural slices of tamago, Raku's tenaga ebi - nigiri sushi made with creamy New Zealand scampi teamed with shaved foie gras, truffle and a soy jelly disc - was the best thing I put in my mouth all year. 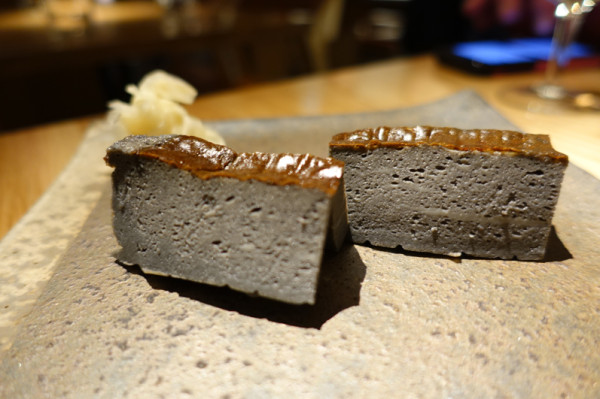 Best Bar
In 2018 I visited 19 different bars. While most were in Sydney's entertainment district, I did fit in a wine bar in Bathurst, a hotel bar in Terrigal and some quality drinking in Manly into the mix as well. My three best bar nights included cocktails, shots and tamales by Lulu’s Sydney at the Midnight Special in Newtown; club sangas and craft beers at The Nook in Manly; and an epic night at my eventual winner - Kagura in Surry Hills. This quirky glass box has that magic combination of a serious Japanese whisky collection, a stellar chef in Yoshi Harada, and a level of intimacy that sees you talk to strangers like they’re already friends. 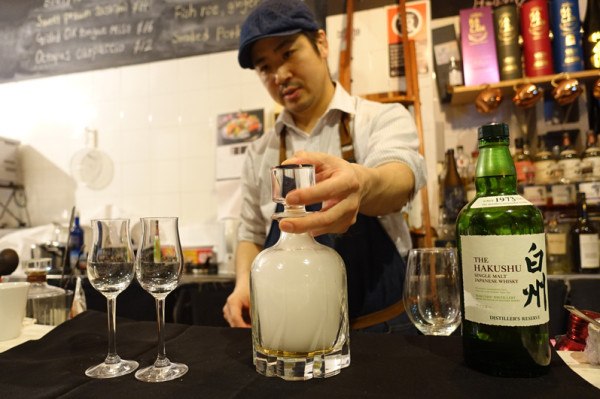 Best Cafe
Cafes were a particularly big feature on this blog in 2018, with 54 different cafes covered across the year, including 13 in rural and regional areas. Looking for that perfect combination of coffee, eats and daytime atmosphere, I traversed the Sydney metropolitan area going everywhere from Dural, Glenbrook and Wetherill Park to Freshwater and Mosman. Two of my standouts were District in Marrickville, who get the coffee, setting and interesting eats combo. almost exactly right, and La Herradura Coffee Stable in Chippendale who won my heart with sweet corn arepas and ajiaco, a comforting Colombian chicken soup. While it’s almost splitting hairs between the garden-like Korean tacos at 5 Loaves 2 Fish in Neutral Bay, and the shakshuka from The Mews in Mosman, it’s the braised pork shakshuka update I can’t get out of my head. Converted from historic stables, The Mews has a convivial European feel, and food that's as innovative as it is tasty. 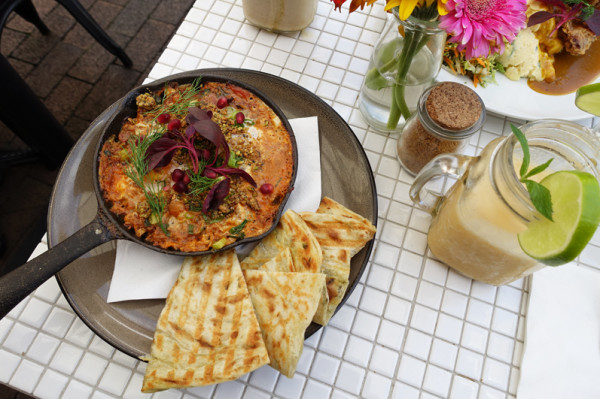 Top Cuisines
In terms of cuisines, 2018 saw Does My Bomb Look Big In This? cover Nepalese, Pakistani, Indonesian, Ethiopian, Taiwanese, Sri Lankan, Syrian and Peruvian cooking in amongst 34 distinct cuisines. Beyond meals I’d broadly term Australian, which of course also come with a plethora of ethnic influences, the cuisines I covered most often were Chinese, Italian, Japanese, Indian and American, so here are the best five of these top five cuisines consumed in 2018.

Chinese
While I’m still obsessed with malatang from Yang Guo Fu Ma La Tang outlets across town, captivated by Burwood’s regional Chinese eats like the wide Shaanxi noodles at Biang Biang, and partial to the the odd Cantonese feast at Zilver Bondi, my best Chinese feed across 17 venues in 2018 was the contemporary Cantonese smoked meats at Yan Restaurant in Wolli Creek. 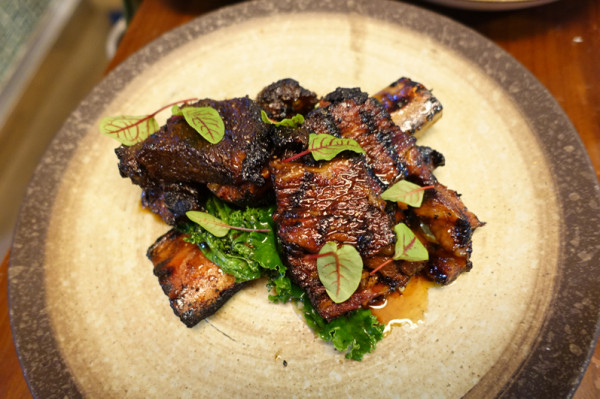 Indian
Rather than centralised around the city, the best Indian restaurants seem to be scattered throughout the ‘burbs. This year I was enchanted by the spacious Urban Tadka in Terrey Hills, surprised with a blue cheese naan at Maharaja’s on Carmen in Carlingford, but the restaurant I’ll be heading back to most quickly out of the 12 Indian venues I reviewed in 2018 is Manjit’s Balmain who made me finally love paneer and produced the best goat curry I ate all year. 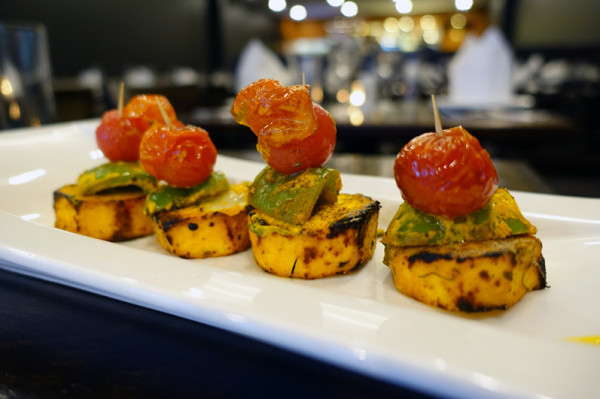 Italian
Across 15 different Italian restaurants in 2018 I ate a lot of excellent meals. Under the talented Nicole Bampton, Capriccio is eating better than ever; while Nonna Gio left me with a warm memory of heartfelt, home-style Italian eats. The lure of Neapolitan pizza at Pizzeria da Alfredo will definitely draw me back; however the one that’s been consistently on my list to return to is Vizio Caffe e Cucina. Saddled with a difficult spot on busy William Street, this all-day Italian eatery is somehow greater than the sum of its parts. 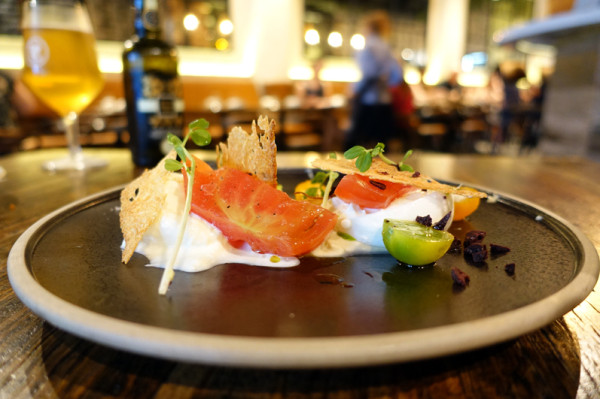 American
There was a whole lot of Americana in my 2018, from hot tamales by Lulu’s Sydney to burgers, poke and fried chicken. American sandwiches were big – I’ve already mentioned the ones by The Nook in Manly, but there were also some beauties at Nighthawk Diner in Chippendale too. However it’s impossible to beat the killer combo. of excellent American cocktails, corn bread and gumbo at Dogwood, BX, though you’ll have to travel all the way to Bathurst to get it. 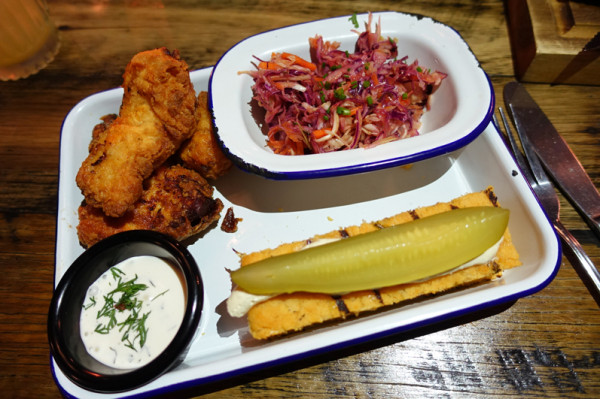 Japanese
Japanese remains the cuisine of my heart, and across more than 18 different venues, I had some wonderful meals in 2018, including Raku and Kagura who both quite fittingly took out earlier categories. Ryu Japanese Kitchen is a tiny spot that warmed up a wet and miserable wintery night. Juan Bowl + Tea produced my most perfect meal in a single bowl, though it was Gaku Robata Grill I was compelled to return to twice to ensure I ate both ramen and chef Harunobu Inukai’s evening selection, including a perfect negi toro hand roll with uni. 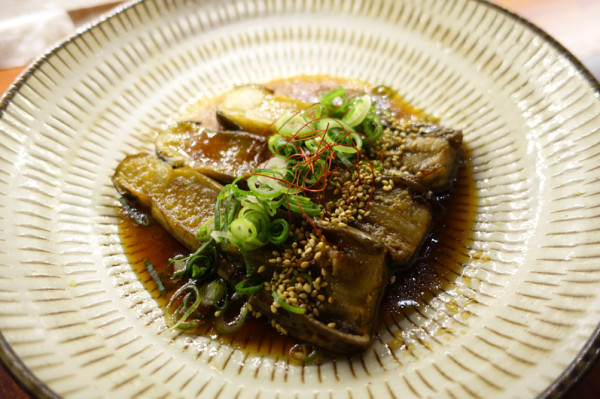 But what about the price?
In 2018 Does My Bomb Look Big In This? covered all price ranges. This year I definitely ate at less fancy joints than I did mid-range restaurants, but there were also quite a few cheap eats thrown in, where a meal for two people came in around fifty bucks.

Best Cheap Eat
In the most memorable cheap eats there was an Ethiopian meal at Gursha in Blacktown, as well as countless dinners along Burwood’s main drag covering everything from dumplings to noodles to malatang. 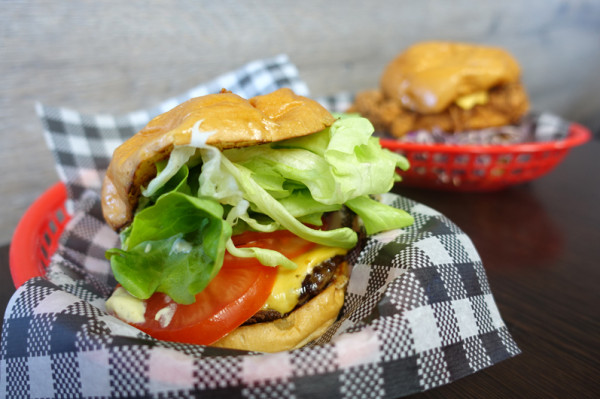 Also in this category, I'd like to make a special mention to Cheezy Burgers who produced my favourite burger of 2018 and got me into a petrol station to eat it (no mean feat). Though the cheap eat that won me over, alongside with a queue of people clad in high vis., was Brazilian Flame BBQ in Zetland. They made the best snack pack I’ve ever eaten - chips topped with three kinds of rotisserie grilled meats and drizzled with a smoked mayonnaise I literally can’t live without. (I’ve been back three times to buy more.) 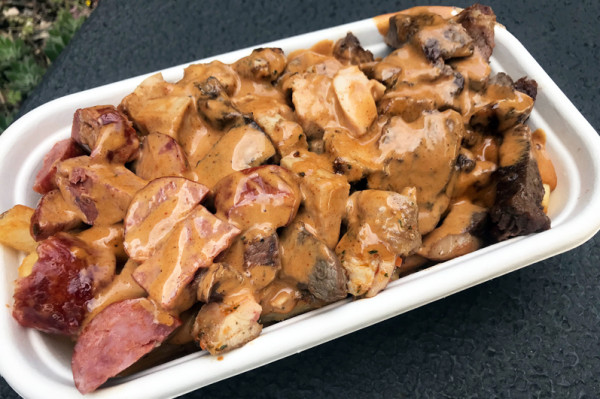 Best Mid-Range Eat
The mid-range was the most hotly contested category of all, making up the bulk of my 2018 eating. 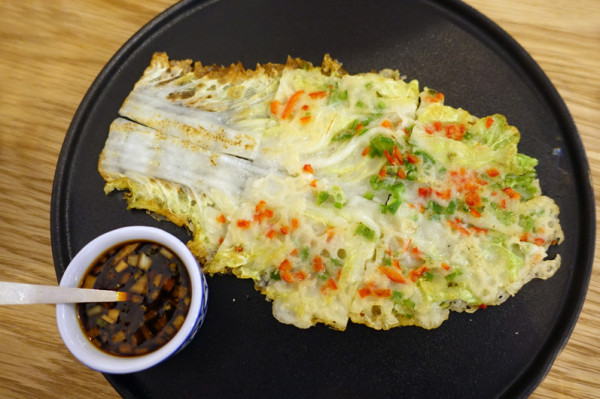 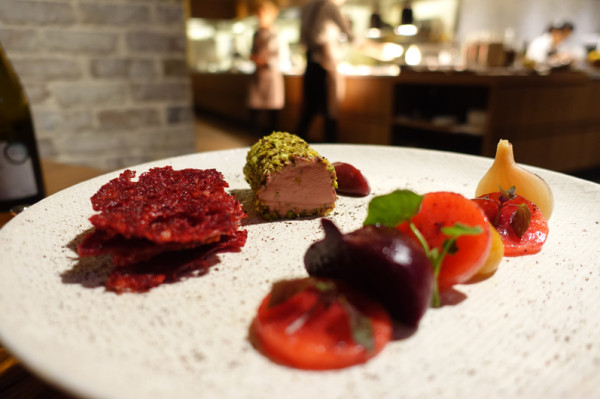 There were three top meals I find it hard to separate, starting with Sang by Mabasa who made a cabbage leaf into a work of art. District Brasserie was the complete package, able to take you from sourdough in the morning to post-work drinks followed by a high-quality, accessible dinner in the heart of the CBD. My favourite by a nose though was S.O.G. in Abbotsford – perhaps simply because they shocked me with a modern Korean dish, the notorious P.O.R.K. pictured below, that I literally had no analogies for: just go and eat it. 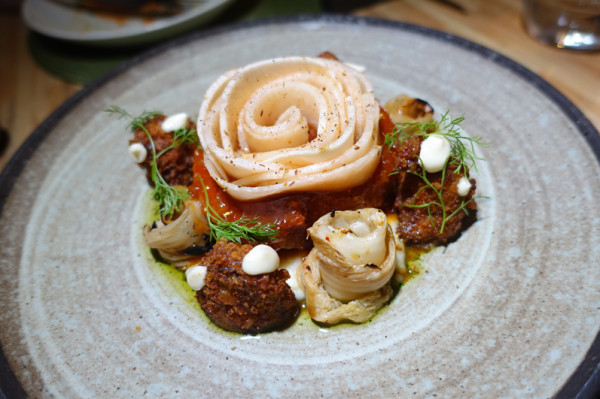 Best Fancy Night Out
When it comes to fine dining my preference is definitely towards contemporary restaurants that reimagine fine dining into something less stiff. Sixpenny takes fine dining to a Stanmore parlour setting with sophisticated yet accessible results. Lumi Dining in Pyrmont is exciting, and eating better than ever; as is Macleay Street Bistro who produced the best steak I ate all year, though it did come with a fifty-buck price tag. 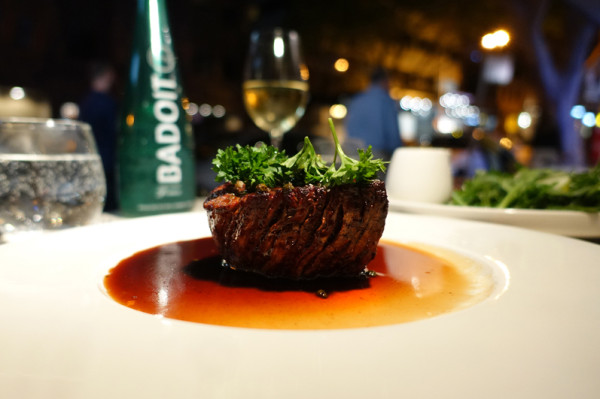 My surprising fancy feed favourite was Cucinetta in the wilds of Woolwich. It’s old-school Italian dressed up with a contemporary twist. The service is warm, the view is fantastic, and Vincenzo Mazzotta's signature gnocchi with pork sausage, Gorgonzola, candied hazelnuts and fresh fig is a killer dish. 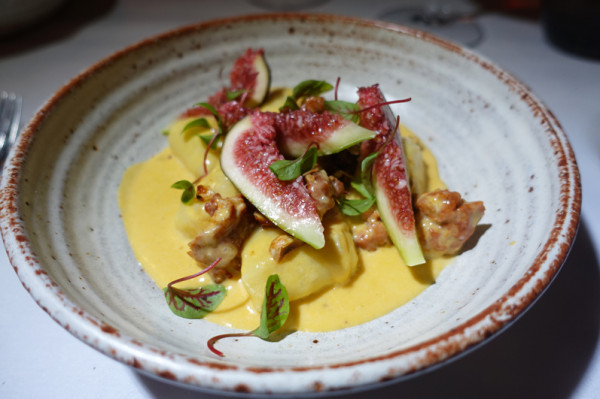 That's it from Does My Bomb Look Big In This? for 2018. Catch you all on the flip side, after we all enjoy some down time and quality holiday eating!
Collapse