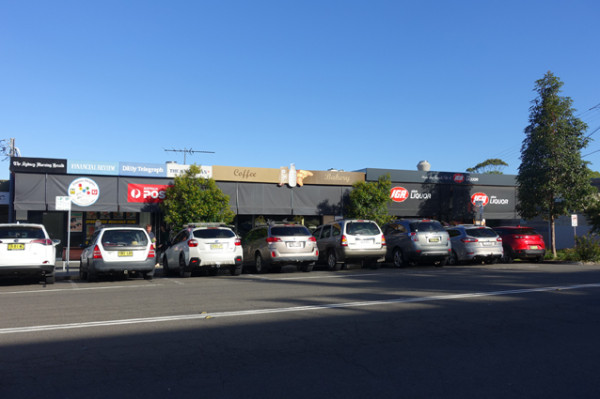 Summer in Sydney is all about the beach, and there are few areas better populated with long golden stretches of sand than our Northern Beaches. Having some mermaid time at North Narrabeen doesn’t mean compromising on good food either, with the surrounding area really coming online with some high-quality eateries. Many of these suburban gems seem to be tucked away in the cooler climes of the surrounding hills, like Coya in Cromer, and Frenchies Brasserie in Elanora Heights. 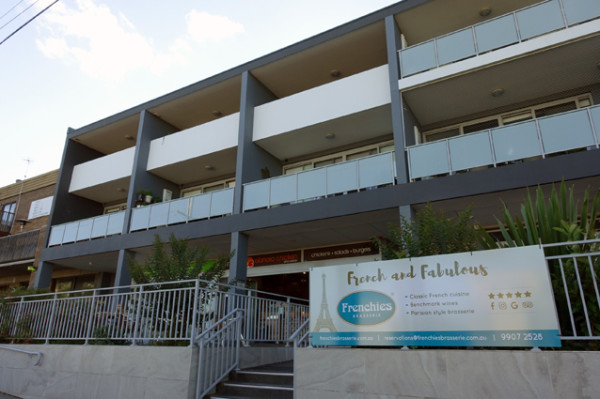 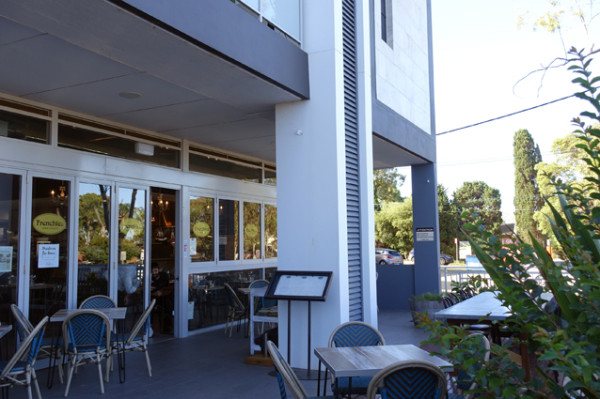 Residents in this leafy green suburb have their needs met by a sleepy, two-sided shopping strip. Sitting at the base of a low-rise residential block, Frenchies Brasserie is much more impressive than it first appears. 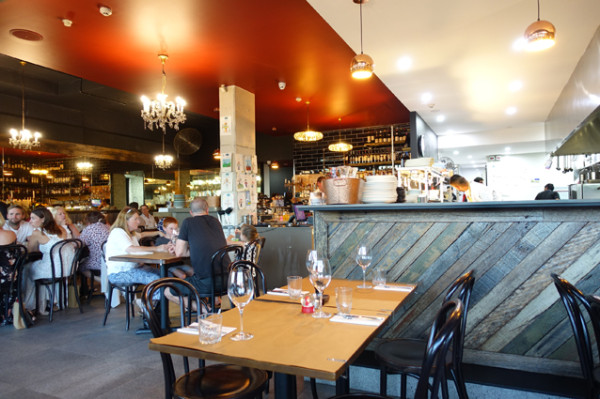 Lined with recycled wood, wine crates and distressed mirrors, the restaurant’s interior really comes into its own as the sun goes down. The rich red ceiling and shabby chic chandeliers help to focus your attention inward – which for me was down into my wine glass. 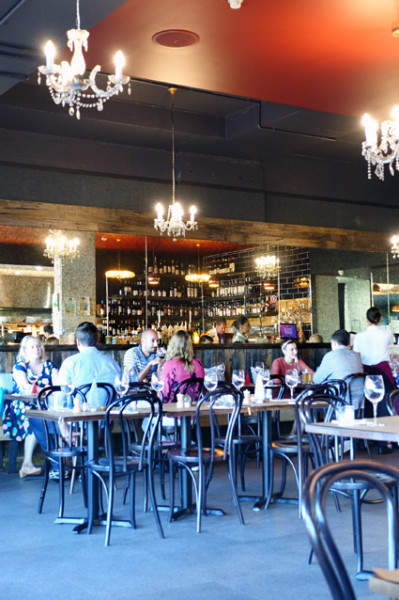 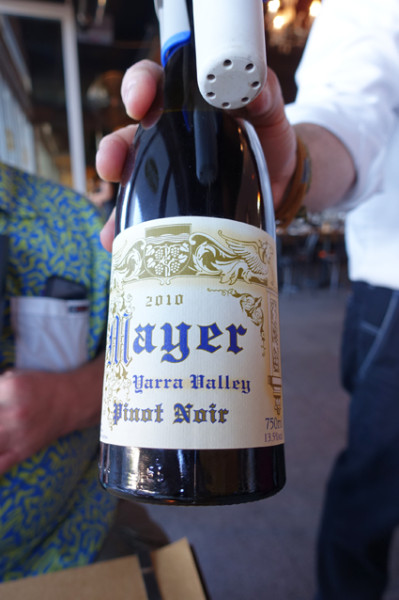 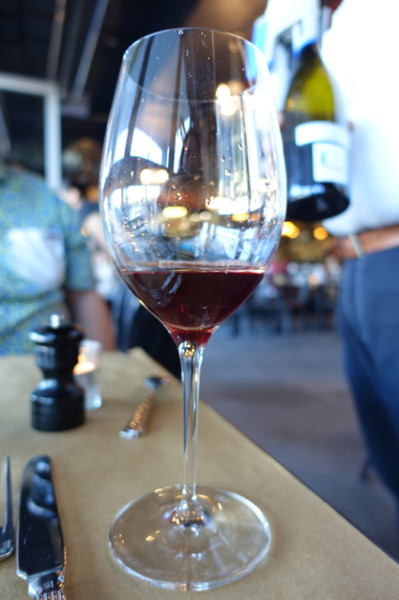 Booze is unexpectedly spectacular here. Owner David Singer is a wine-buff – but more than just a drinker and collector, he’s worked as a wine retailer, so has a whack of experience at tasting, choosing and selling wine. It shows in his eloquent wine list descriptions, his nuanced table service, and in the fact that he’s got a Coravin wine preserver system. This basically gives you access to expensive wines by the 50ml pour, so for twenty bucks, you can dip your nose into the 2010 Mayer ‘Close Planted’ Pinot Noir ($20/50ml). 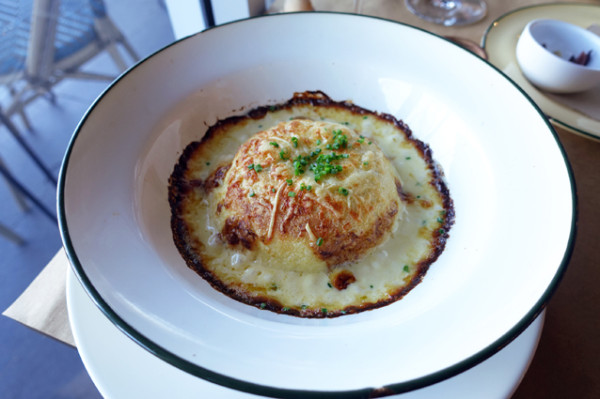 Along with an excellent pinot nose, you’ll get plum, Chesterfield leather and spice in a super-smooth package with enough acidity to cut through the cheese in the St. Agur Twice Baked Souffle ($19). While being twice-cooked in an enamel tin plate makes it super-heated, this is pretty much a textbook soufflé with an airy texture and nicely burnt edges you can enjoy scraping off the plate. The big blue cheese is held nicely in check in this generously proportioned dish that’s both big enough and rich enough to share. 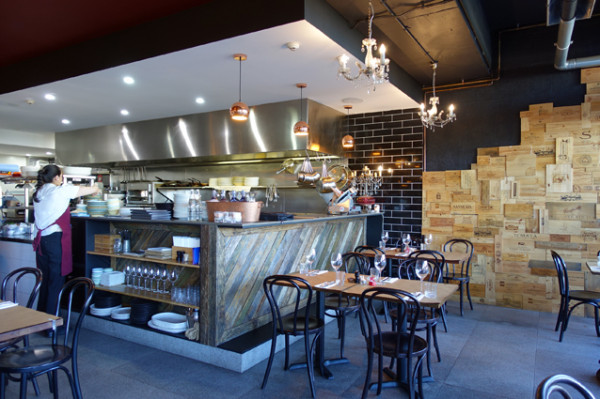 The soufflé is the work of head chef Fabian Oliveau who honed his skills with four years under Justin North at Hotel Centennial. To complement Singer’s extensive beverage list, which extends beyond wine to beer, cocktails and Spirit Flights ($23-34), Oliveau has constructed a compact but exciting French menu. 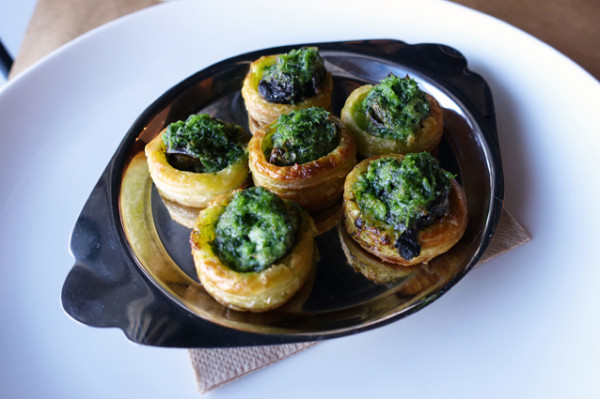 He has taken the work out of escargots by serving them as Snails Vol au Vent ($22) in little pastry cups with onion jam and garlic butter. 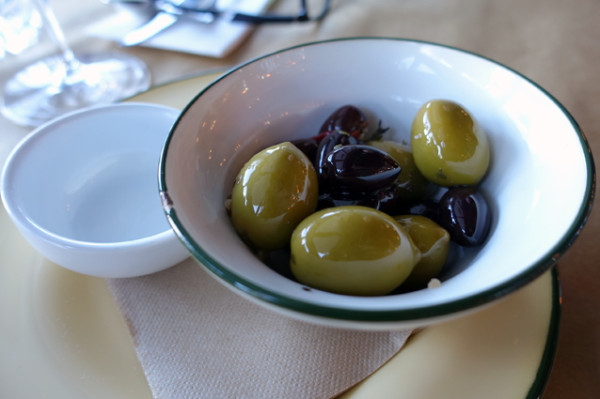 Along with warm Marinated Mixed Olives ($7), they’re perfect mouth-popping drinking snacks, with their juices best mopped up with a crusty baguette. 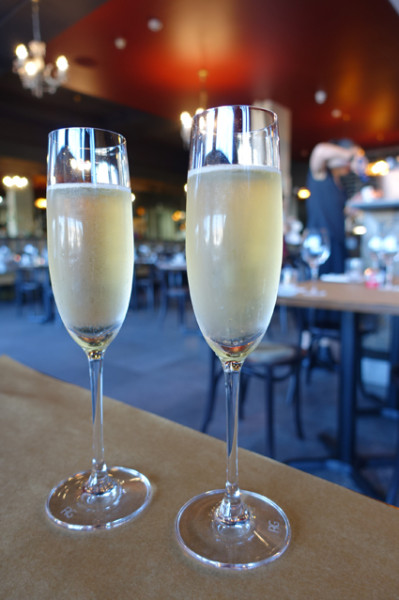 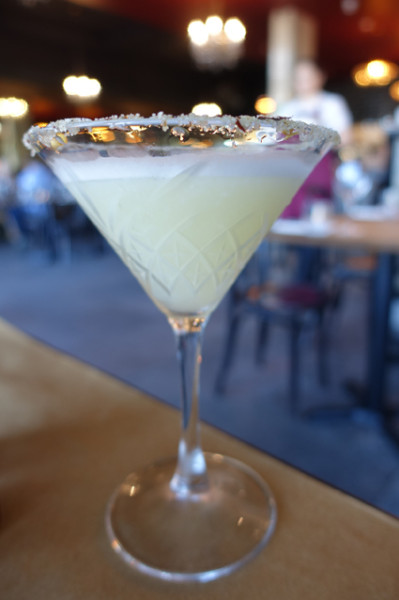 Accompany them with a glass of the bubbly stuff – the smooth and complex Drappier 1er Cru ($20) is worth the price; or if you’d prefer a cocktail, La Basquirita ($18) is another worthy aperitif. It’s basically a margarita taken to the long-contested Basque region between France and Spain. 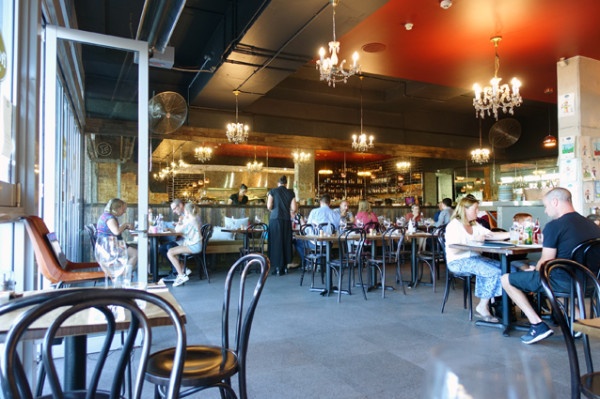 The area is known for L’espelette peppers, so here the dry, lemony cocktail has been given a Basque update with a dried red pepper sea salt rim. 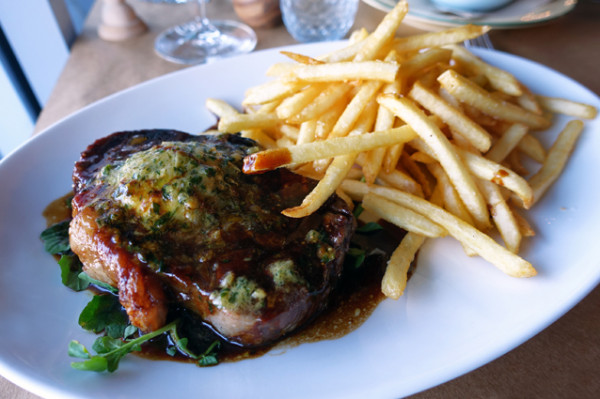 Against a classic Steak Frites ($29), presented here as a 250 gram Rangers Valley black angus sirloin with shoestring fries, we dipped back into the Coravin list. We pitted Domaine Prieure Roch’s 2010 ‘Ladoix Le Clou’ Pinot Noir ($30/50ml) against Torbreck’s ‘Run Rig’ Shiraz Viognier ($30/50ml) with the peppery, raisin-like dark fruit flavours of the latter wine winning my favour, especially in combination with our well-rested steak. It’s served oozing with Frenchies’ butter – Oliveau’s own café-de-Paris inspired concoction with parsley, garlic and anchovies, among other things. 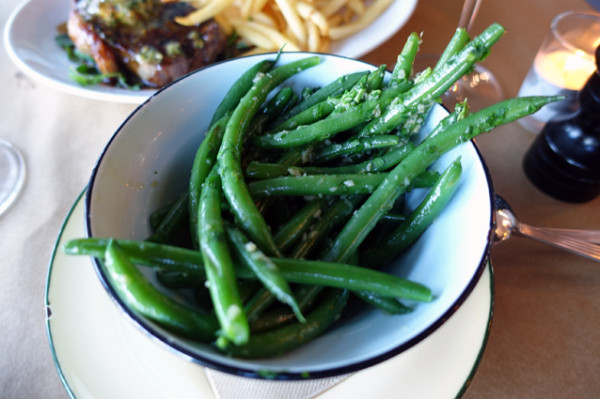 The kitchen’s only misstep was a side of Green Beans ($9) that lost their snapping crispness after spending slightly too long in the pan. 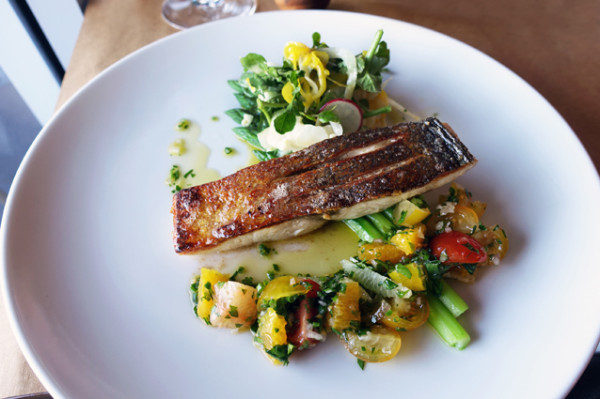 On the summer evening I dined, the Pan-Seared Market Fish ($33) was a kingfish fillet, cooked so the skin was crisp, but the underlying white flesh remained moist and yielding. With thin spears of green asparagus and a pretty fennel and citrus salad, the summery plate was united by a simple citrus sauce vierge. I was sad it disappeared too quickly, before I remembered they do a classic Tarte Tatin ($15). 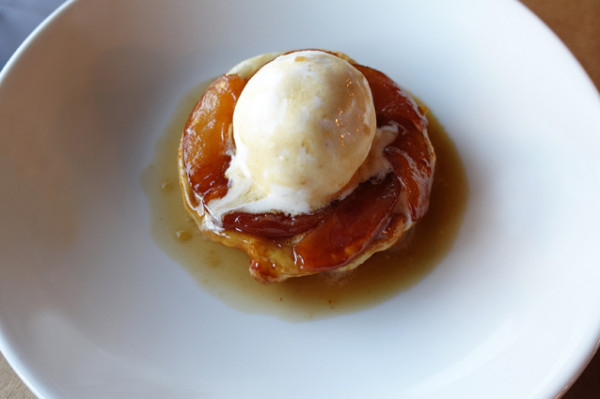 The buttery upside-down apple tart here is well executed though the super-sweet, white chocolate butterscotch ice cream could be overkill. 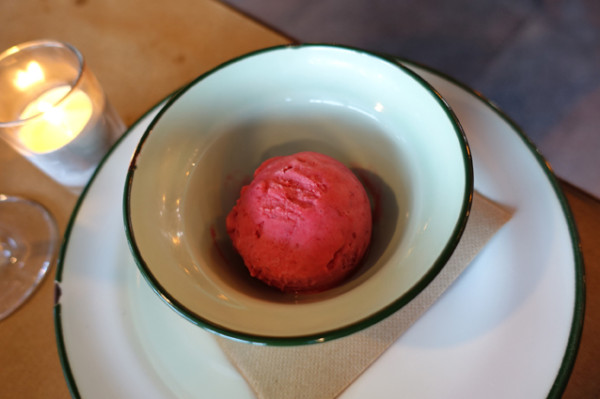 As I tuck into a palate-cleansing scoop of raspberry sorbet from the Selection du Glacier ($5/scoop) I asked whether the delightful blend of frozen puréed red fruit was made in house? Turns out it wasn’t, but I was informed that chef has just received his Pacojet, so his own icy concoctions are on the way; so there's hope for a more adult vanilla bean on the tarte Tatin. 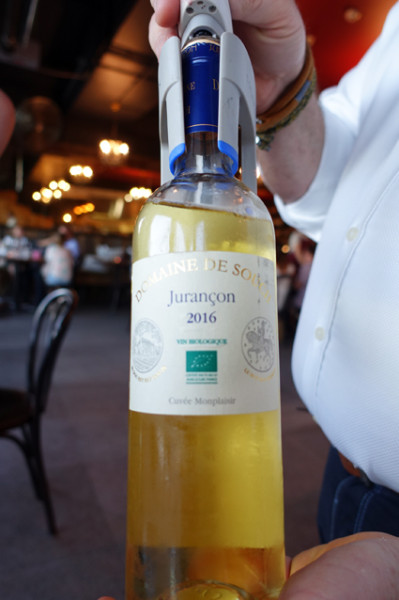 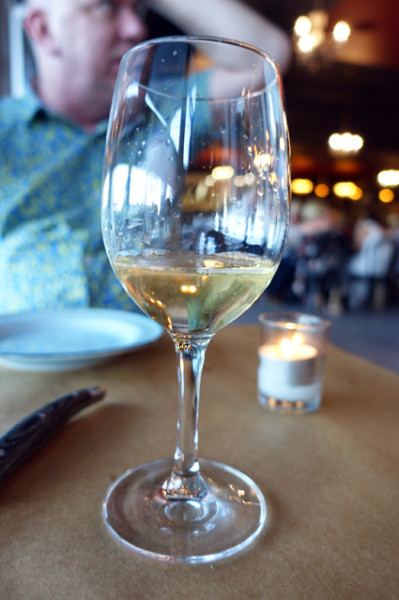 Take an Uber to Frenchies Brasserie – you’ll thank me later.