There are two ways to get into Dandy Lane. 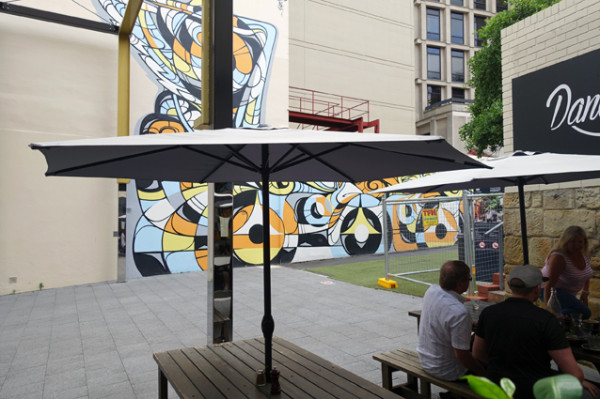 While we came in through an old-fashioned arcade, which made it look like we’d be dining in a terribly lit office corridor, more savvy folk would enter through Collins Court, where a giant Phibs mural captures the beaks, plumage and beady eyes of Hobart’s plentiful bird life. 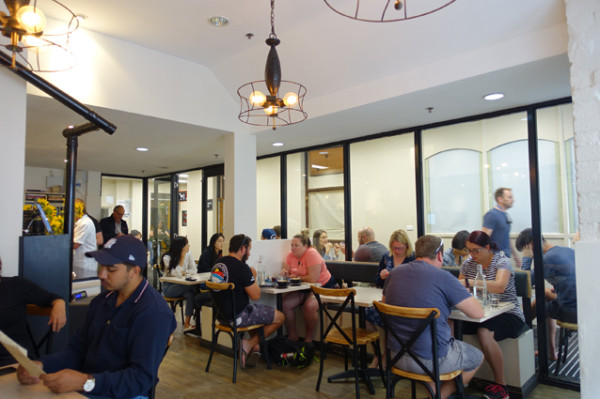 Viewed from this side, the interior space is attractive and inviting. 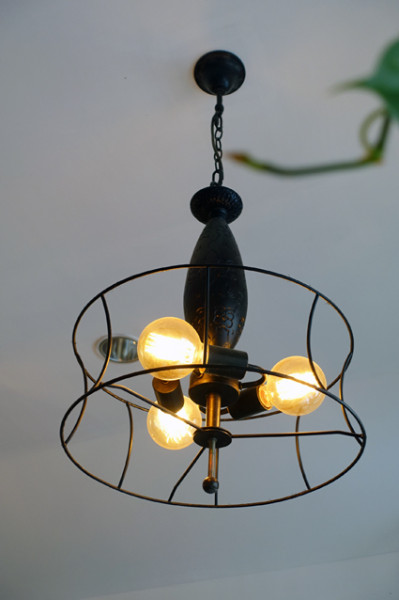 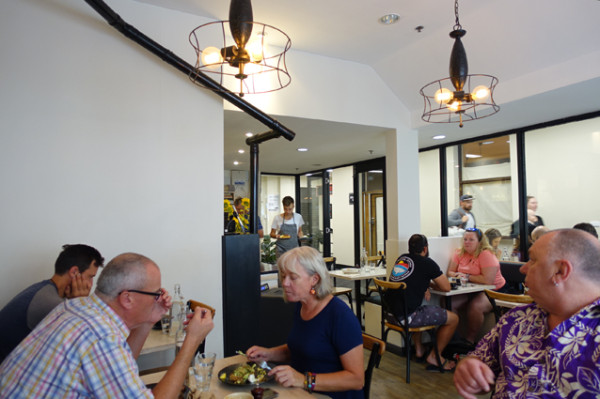 While I’m not sure about the white wall decorated with empty picture frames, I do credit Dandy Lane with coming up with a new way to hang their Edison bulb hallmarks of a hipster café. 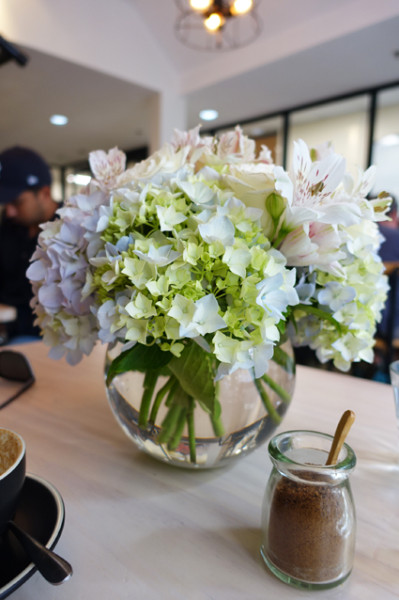 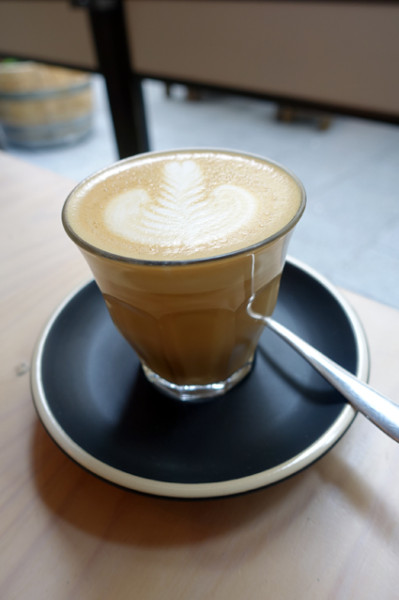 The stark steampunk-inspired minimalism is offset by some organic forms - a beautiful glass dome of pastel blooms sitting right on our window table, and a glass pot of the kind of sugar that says they're serious about coffee. The beans, which are from by local, small-batch roaster, Villino, went okay in a Latte ($4) but performed better in our strong Flat White ($4); so go the Extra Shot ($0.50) if you like good coffee cut-through. 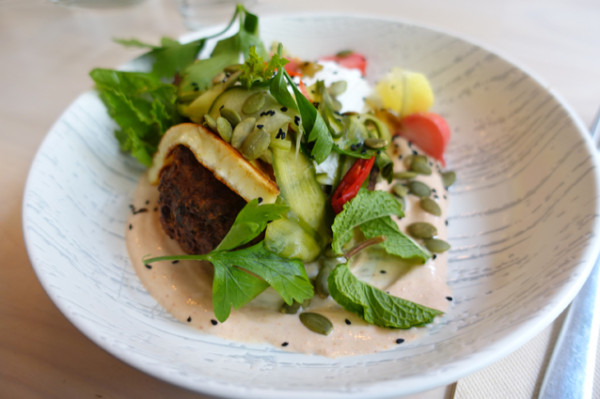 Dandy Lane puts their own spin onto hipster breakfast standards. They are clearly concerned with how their dishes will look on Instagram, but the vanity metrics are mostly kept in balance with creating good flavour. Zucchini, Mint and Fetta Fritters ($19.50) are fresh and tasty against a pink lake of harissa labneh scattered with seeds (seed scattering seems to be a bit of a Hobart motif). You'll find the crisp brown balls tucked away under a tumble of springy fresh herbs and house-made pickles, along with a golden slab of haloumi cheese and a poached egg. 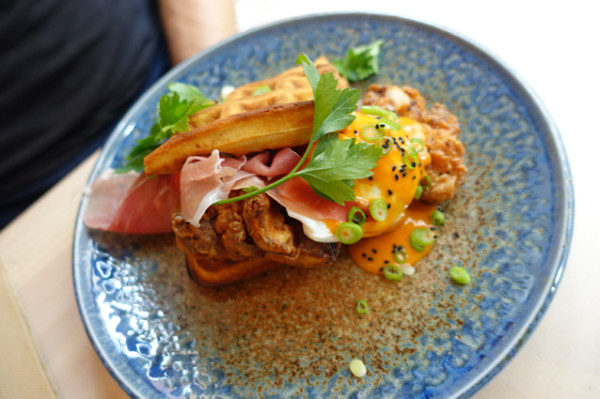 Continuing the good Hobartian form on chilli, the sriracha Hollandaise is the real win across both a Fried Chicken and Waffle Benny ($22) and a Pulled Pork Hash ($23). While there’s a lot of waffle to get though, the fried chook is a standout against poached eggs, freshened up with spring onions and parsley. I’m not quite sure what the prosciutto is doing on this plate other than adding some pink. 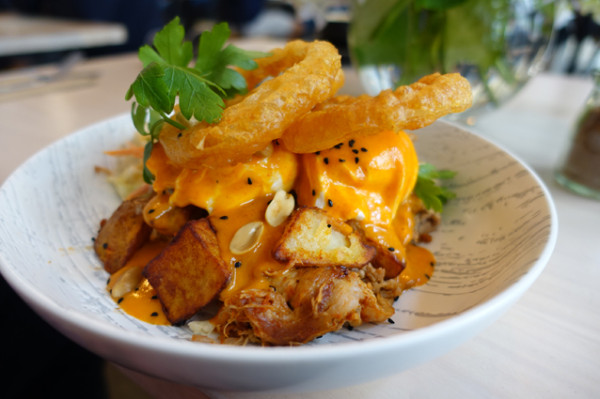 The same goes for the peanuts on the pulled pork hash, though I like the rest of the combination - long shreds of tasty pulled pig, crisp potato, ‘slaw and onion rings - even if it is kinda hectic for an early breakfast. It’s all bound together with that bright orange sriracha ‘Holly’ which I am pleased to report has actual bite.

While Hobart seems to err on the side of generosity, it’s my view that the portion sizes at Dandy Lane are exactly right for breakfast without bloating. 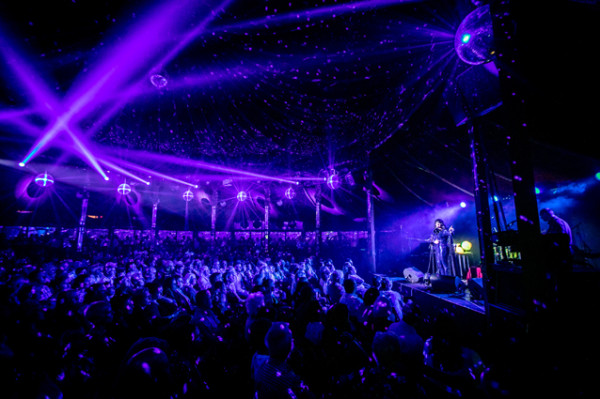 It really feels like Sydney Festival has begun for another year when you are settling in to whichever Spiegeltent is in town for another evening with Camille O’Sullivan on stage. One of the perennial performers of Sydney’s premier arts festival, Ms. O’Sullivan keeps us coming back each year because there is nobody else who does what she does the way she does it: pouring herself into each and every song with 100% commitment, holding back nothing, hurting herself hard for us as if her life depends on it. 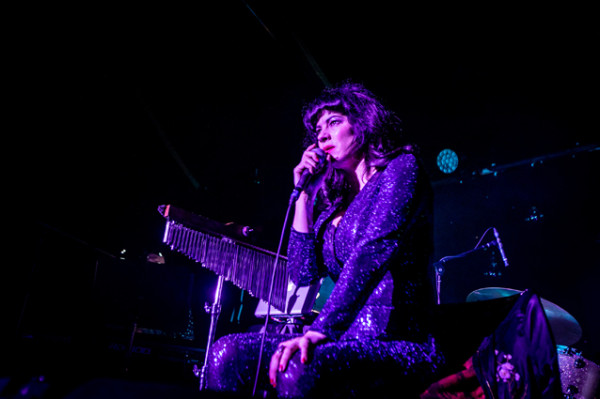 They are the songs of her heroes: Bowie, Cohen, Cave, Brel, utterly owned and reinterpreted in ways that momentarily make you forget the originals. Sometimes they’re spliced together with a wildly different song midstream (Pink Floyd’s Eclipse made an unexpected appearance like this on Opening Night) and at others they are so radically de and re-constructed it takes a few lines to work out what it is at all. 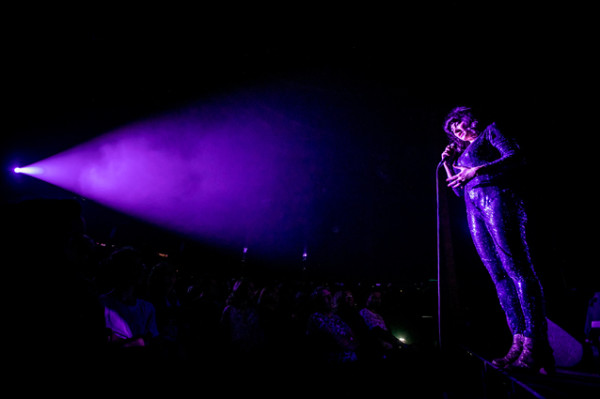 This is not everyone’s cup of tea, especially now that ever-increasing ticket prices ($60-$70 plus booking fee, this year) means that the vast majority of the audience here was either recently retired or just about to join their ranks. The occasionally hard-rocking trio behind her was either too loud or too abrasive for a fair few of them, who bled away throughout the evening. Their loss, but it was a shame to see so few younger faces in the crowd, as they would have probably loved it all so much more. 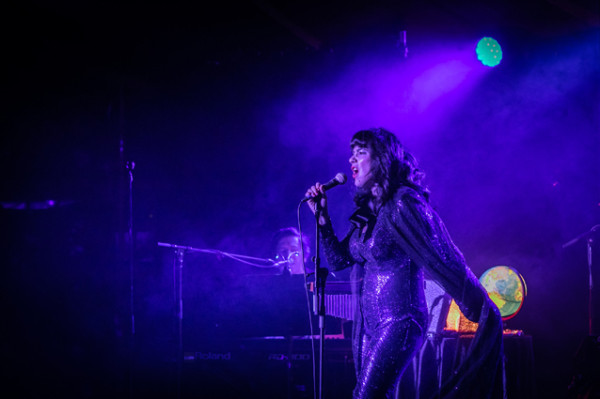 Still, the walkouts were a small minority, and those that remained seemed entranced by even some of the more obscure covers (Mott the Hoople’s All The Young Dudes was a raucous triumph) alongside her more well known interpretations, like Nick Cave’s The Ship Song or Cohen’s Anthem. The night was dedicated to the recently departed David Bowie and Leonard Cohen, so the focus was on their work this year, but however she compiles her set list, I’m sure we’ll return yet again next year to do it all again.

In a less enjoyable post-script, it was sad to leave the Magic Mirrors Spiegeltent excited by the show, only to find yourself in an unattractive and moribund Sydney Festival Garden in Hyde Park. What was once the beating, buzzing heart of the annual festival experience was a pale shadow of its former self, pared back into something that felt like a lame, badly laid out afterthought. It once was somewhere you could happily hang out for hours. Now it’s made of milk crates, cable ties, plywood and hoardings, somewhere between a childcare centre playground and a construction site, with a few food and drink stalls thrown in, including newcomer Nel Restaurant tucked away behind the Spiegeltent. It’s obviously all about the ticketed events these days in user-pays Sydney, even at festival time. Pity...