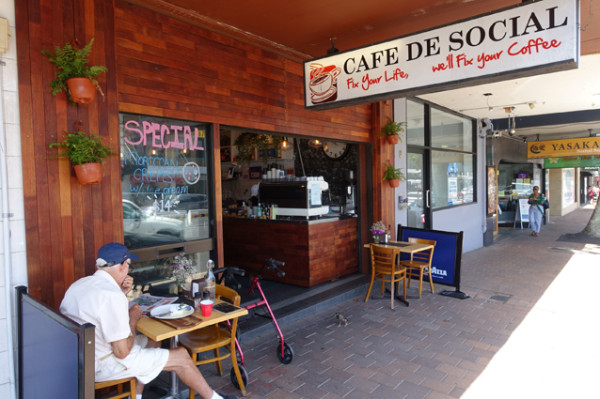 Café De Social is a likeable little Neutral Bay café set on busy Military Road. “We wanted something to go with socialising, so customers can come and talk – that’s why we also tried to create a cosy atmosphere,” owner Navjeet Singh explained, when I asked him about the name. 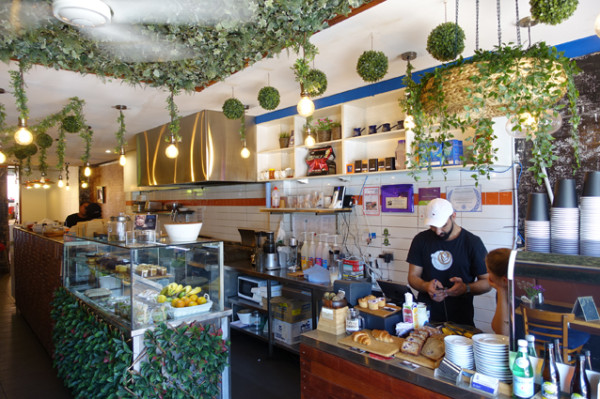 Inside Singh has hung a roof of mixed frosty leaves and covered his glass counter and walls with trellises of fake plants. Looped garlands, exposed light bulbs with their cords wrapped in leaves, and little, round topiary balls, all dangle from above. 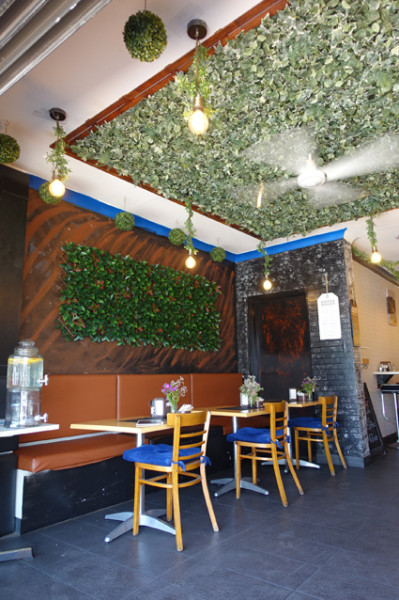 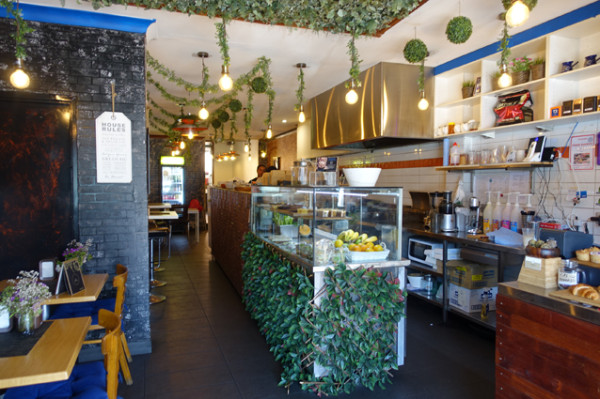 Outside, the fake greenery gives way to real stuff, with four ferns mounted on the wooden shopfront. There are also glass jars of pretty blooms on all of the tables. 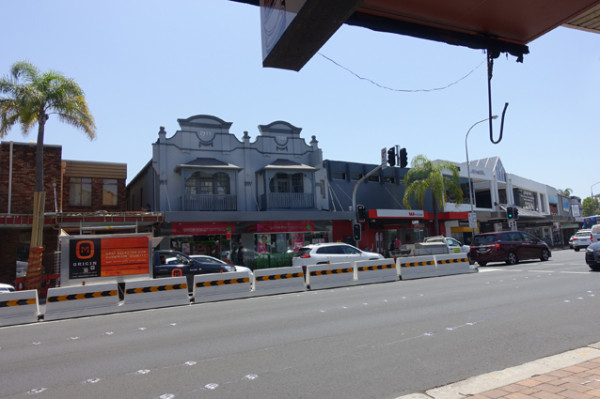 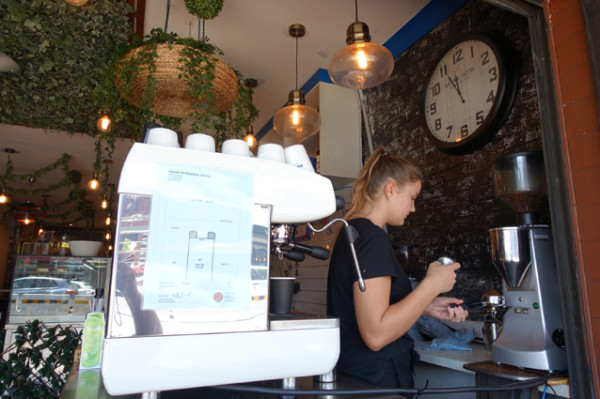 Café De Social are dog-friendly, though you and your pooch will have to be lucky to secure one of two tables in the meagre allotment of outdoor dining doled out by North Sydney Council. We were lucky enough to snaffle one, allowing us to watch the world go by as we tucked into lunch. 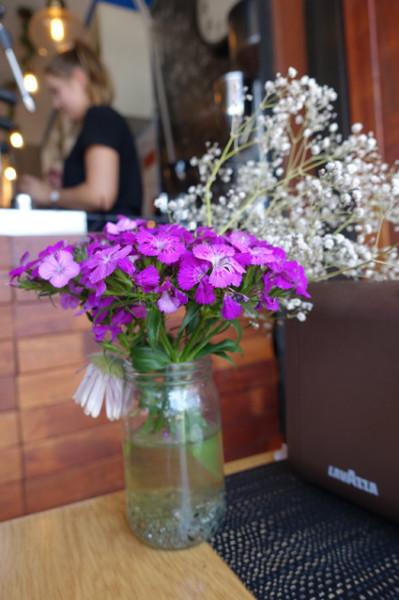 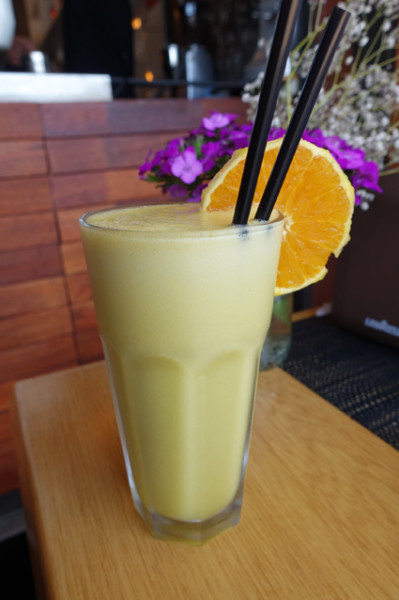 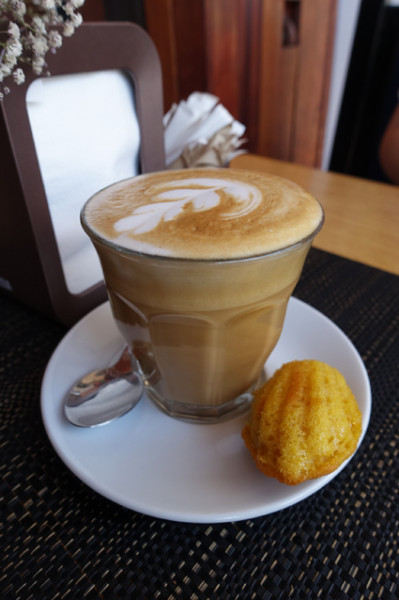 In terms of drinks, the Detox Juice ($6.50) is freshly squeezed and frothy. With orange, apple and pineapple juice, it’s well presented and nicely balanced with a hint of peppery celery as you hit the bottom. Arriving with a Madeleine, the Latte ($3.50) made on Lavazza beans (which aren’t generally a favourite), was serviceable but a little bit scorched. 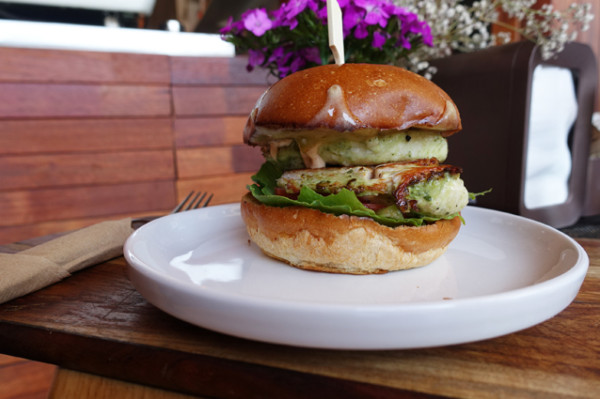 Built on a brioche bun made by a local baker in Brookvale, the Grilled Chicken Burger ($14) is a nice, honest burger. 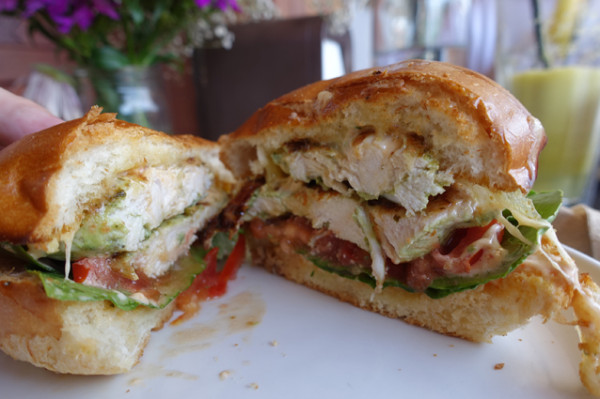 The bun isn’t too sweet, and it’s laden with grilled chicken, accentuated with melted cheese, tomato, lettuce and enough harissa mayo. to give it a little zing. I enjoyed eating it, noting the attention they paid to layering ingredients, that helped ensure the bun wasn't soggy before I could finish it. 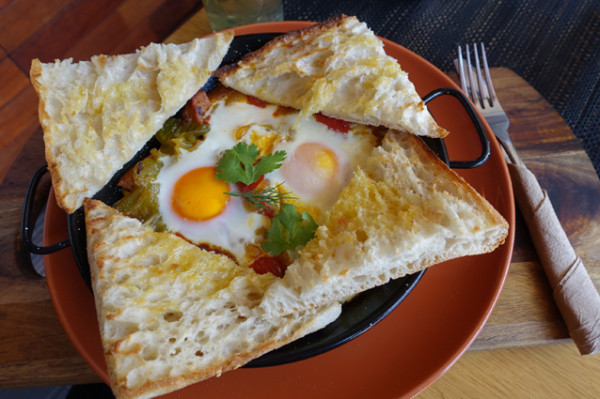 What they’re calling a Chakchouka ($14) here, has been deconstructed from the usual spicy, North African tomato-based stew. By cooking green capsicum long and slow, and flavouring them with cumin and other spices, they’ve come up with quite an interesting breakfast. Served in a little two-handled black pan, the sweet capsicums are joined by spiced onions, oven roasted tomatoes, hunks of beef sausage, then covered with two baked eggs that were slightly too set for my liking. Accompanied with buttered Turkish toast, the dish wasn't quite what I was expecting, but I did like the exploration of texture, and the fact you could taste each individual ingredient. As a new breakfast dish onto itself, rather than a chakchouka, I found it tasty and successful.

Coming from the other side of the Sydney Harbour Bridge, where breakfast for two rarely extracts much change from fifty bucks, I found the pricing here very competitive.