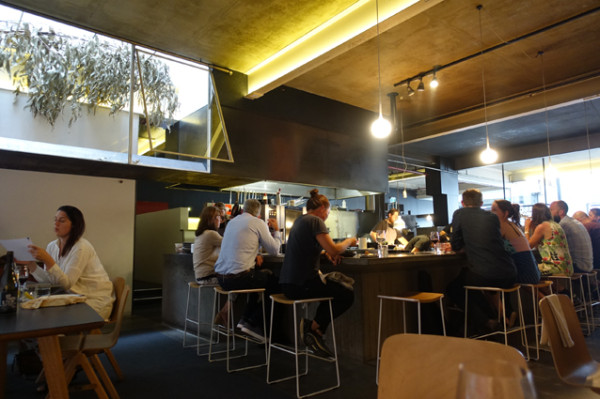 Hobart has a lot of beautifully preserved architecture, and the heritage-listed, Argyle Street art deco exterior of Franklin Hobart is no exception. 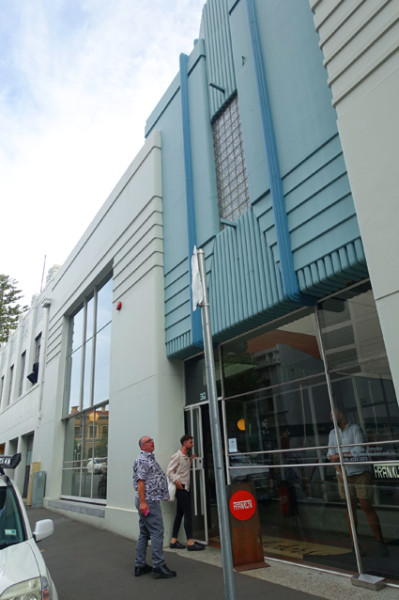 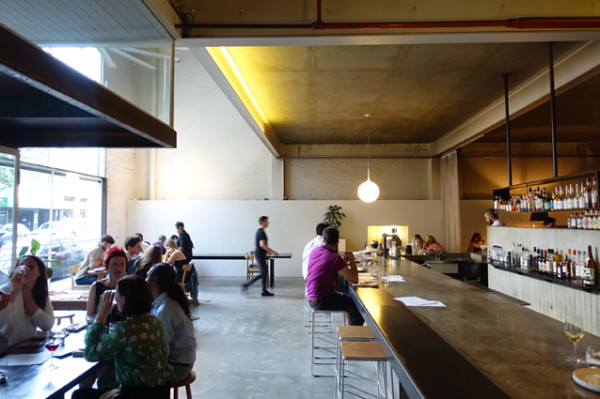 Prior to housing the Mercury newspaper’s printing press, the minimalist restaurant space was once a 1930s car dealership called City Motors. Today you’ll find it sleek, dark and angular, dominated in the light-filled front room by an austere polished concrete and metal bar. 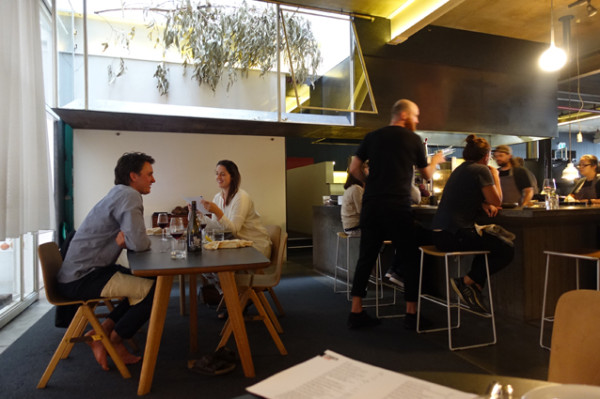 In the darkened rear, it has been softened with painted paling faux-walls, fifties-inspired furniture, and gauzy drapes that try to create some cosy lounge-room type nooks inside the industrial space. In the large open kitchen, centred around a wood-fire Scotch oven, you’ll find Analiese Gregory. You might recall Gregory’s cooking from her last Sydney venue, Bar Brosé, before she relocated to this island state. 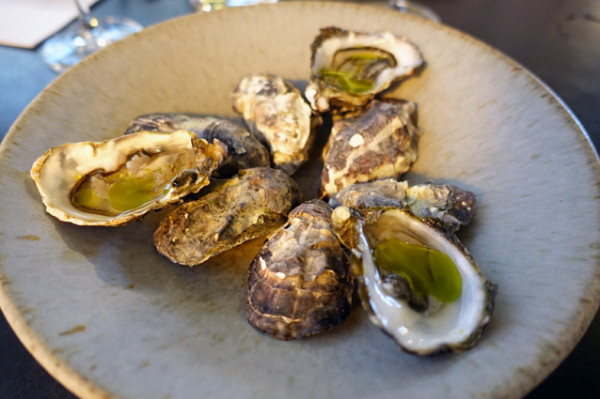 At Franklin her emphasis is showcasing Tasmanian produce, starting with Blackman Bay Pacific Oysters ($5/each) enhanced with a bright green dribble of elderflower vinegar. 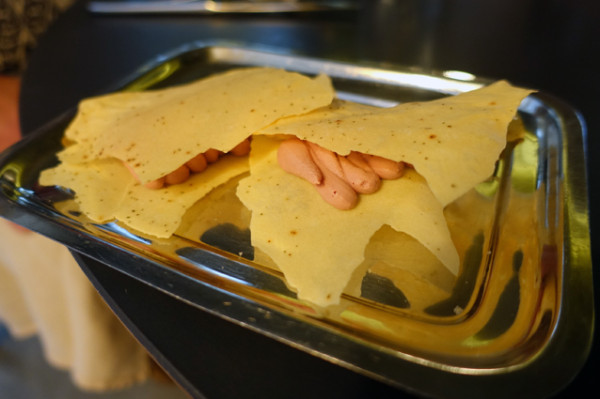 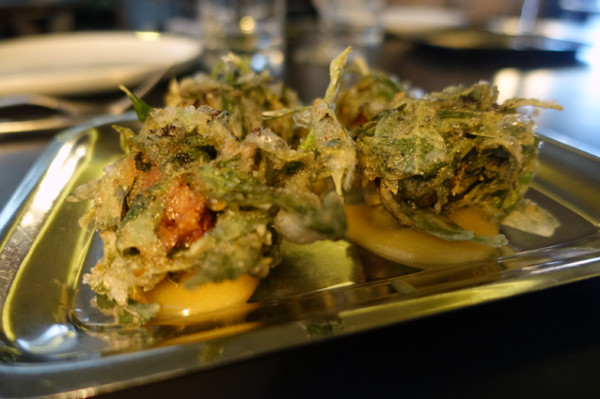 Crisp Octopus Head and Saltbush Dumplings ($4/each) are tasty, especially when dragged through a golden sauce that evokes preserved lemons. 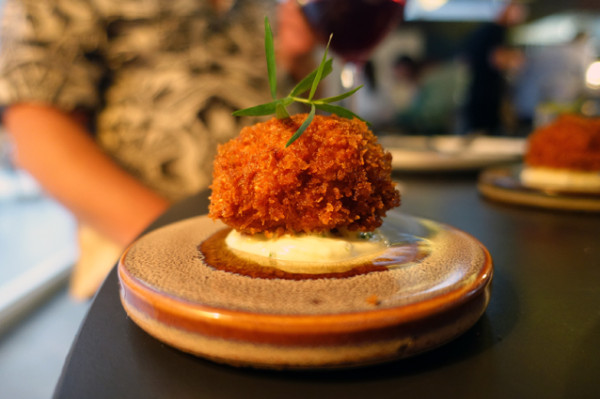 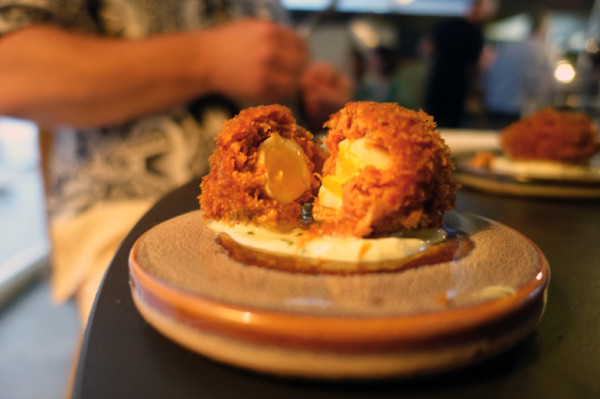 The only disappointment is a too-oily, set Scotch Quail Egg ($5) encased in sobrasada, a spreadable Spanish sausage. 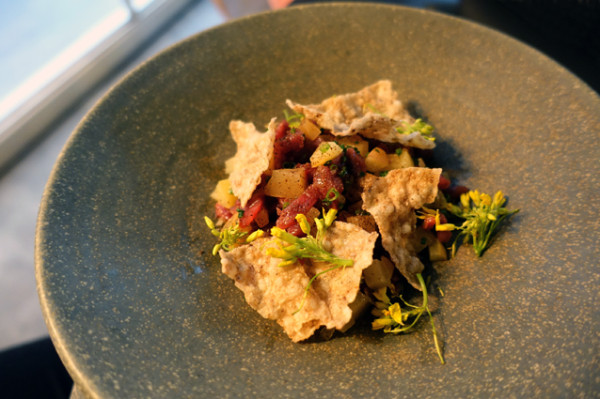 Gregory’s emphasis on local produce continues into our shared dishes with Bruny Island Wallaby ($20) served raw and delicate against a slight rumble of coffee brown butter offset by pickled pear. Eat it with a fork, or scoop it up with the edible blooms onto the accompanying buckwheat crisps, if you prefer. 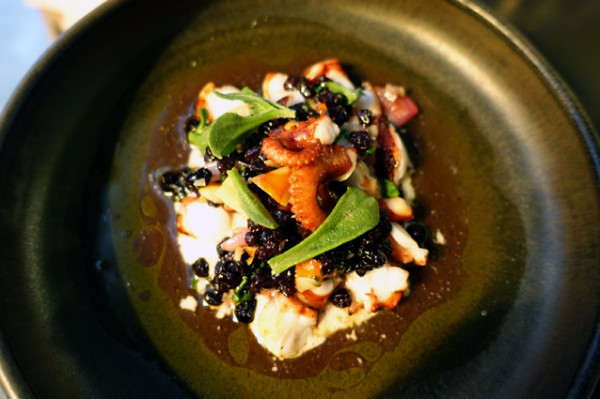 For our drinking journey, we left ourselves in the hands of Manager Forbes Appleby, whose list leans towards pricy. He kicked us off with a co-branded drop from local star winemaker, Peter Dredge, the 2017 Dr. Franklin-Stein Pinot Noir. I don’t know if it did dishes like the Wood Roasted Octopus ($24) any favours. Regardless it was a pretty dish with a nice smoky undercurrent brightened up by sweet and sour currants. 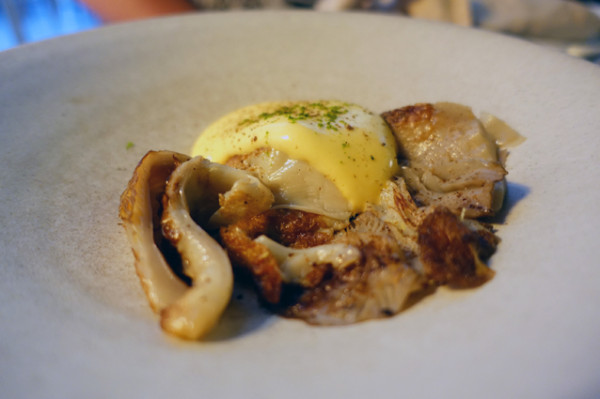 With most of the list leaning towards natural, we gave our palates a break by ordering the four listed sakes.  While quite slow to arrive, the four sakes all imported by Blackmarket, were bested by the pure intentions and natural rice characters of the Mutemuka Shuzo ‘Mutemuka’ ($15) from Koshi in Japan's Kumamoto Prefecture. It went particularly well against the Tunnel Hill Oyster Mushrooms ($16) served with braised mekabu and egg yolk sabayon. 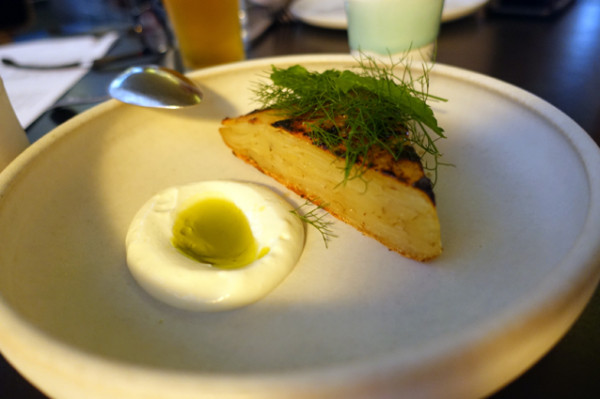 The buttery seaweed mushroom combination was insanely good; well I think it was - I would have needed a second mouthful to really be sure. And therein lies the sticking point for me, refined as we tried to share four-ways a well-executed triangle of Wood Roasted King Edward Potato Galette ($20): the portions at Franklin are too small. Combining four people with very small portions, left everyone wanting for more of each dish. Well, except for the Littlewood Lamb ($40), which, while still small, was dominated by unrendered fat and required too much sawing for my liking. With the benefit of hindsight, I’d opt for the ‘Feed Me’ ($85/head) option initially suggested by staff without any explanation that tackling the menu otherwise might lead to disappointment. 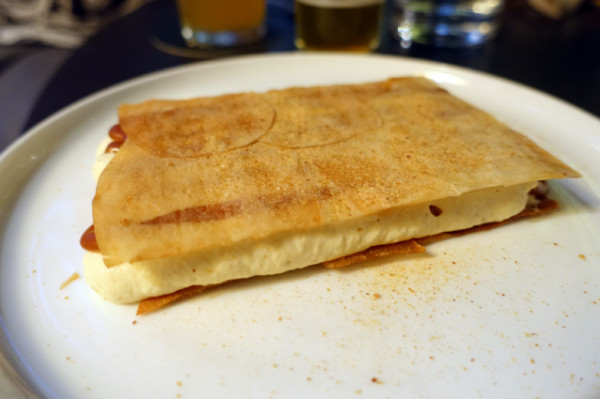 They redeem themselves by encouraging us to order the Crispy Potato ($16) dessert in duplicate. With lashings of salted caramel and a fluffy brown butter mousse, it’s a bit of a Gregory signature, travelling with her from Sydney, though here I hoped to taste more of the top-quality Tasmanian spuds.