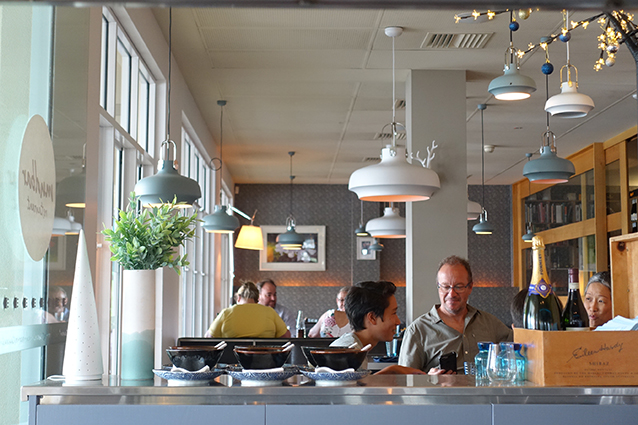 “Just keep Mudbar in the back of your mind,” my newfound Tasmanian friend advised, as we bonded at a Taste of Tasmania dinner. We were discussing my impending visit to Launceston, and whether I should dine at picturesque, nineteen-year stalwart, Stillwater, or the city's more recent newcomer, Grain of the Silos restaurant with former Sydney chef, Massimo Mele, at the helm. 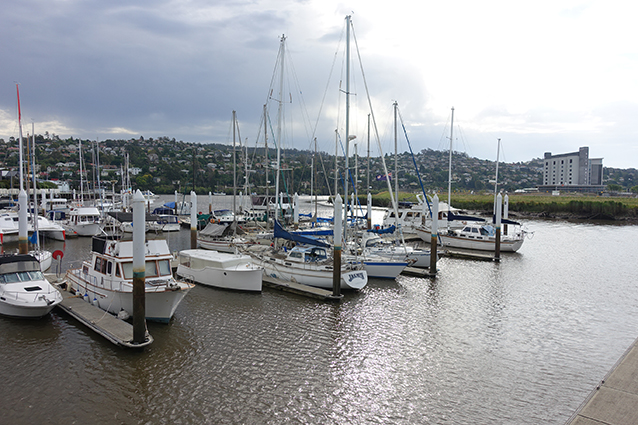 Reading menus as we took a winding route between Hobart and Launceston, their words echoed in my head, encouraging me to change my reservation(s). 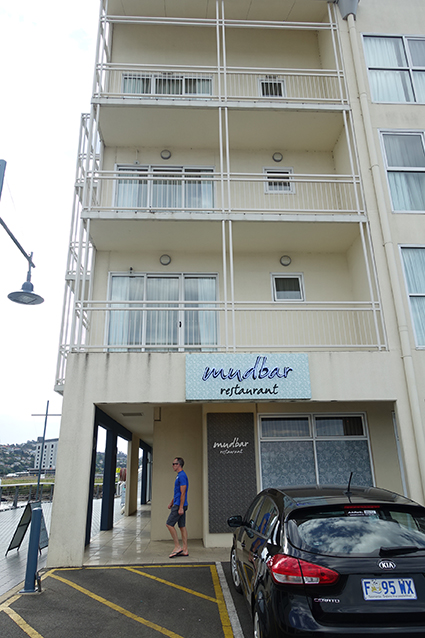 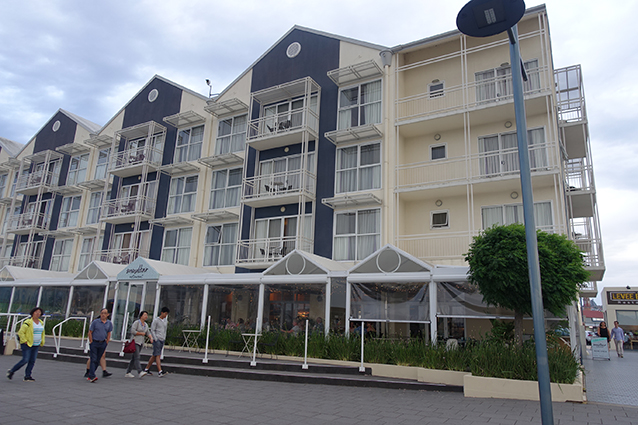 Located at the Old Launceston Seaport Marina - a sixty-berth marina that was transplanted from Rushcutters Bay after being constructed as The Olympic Yachting Centre for the 2000 Summer Olympics - the restaurant sits at the base of the Peppers Seaport Hotel. 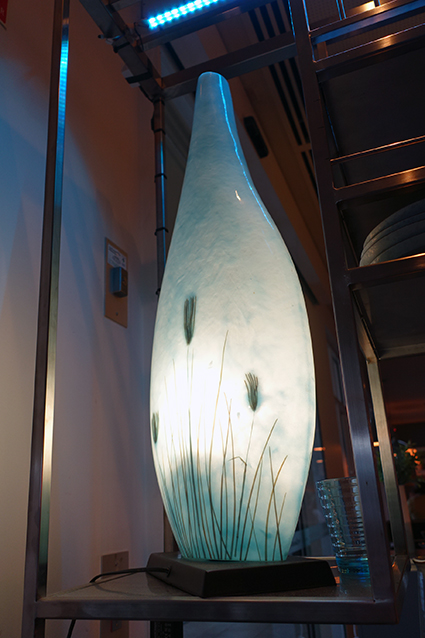 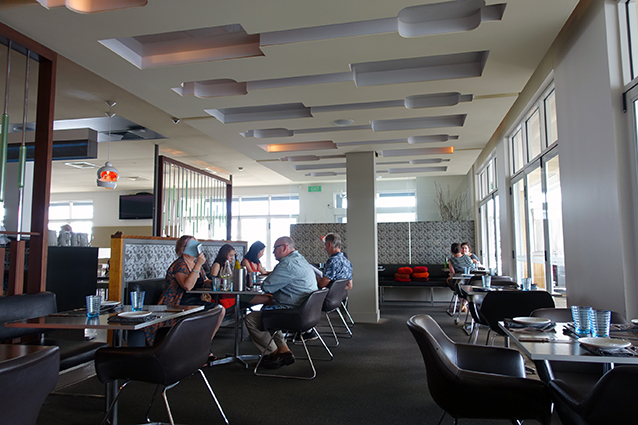 While the architecture isn’t anything remarkable, the darkened interior does keep guest attention focused on the floor to ceiling windows, and the view, aimed right at the Grain of the Silos. 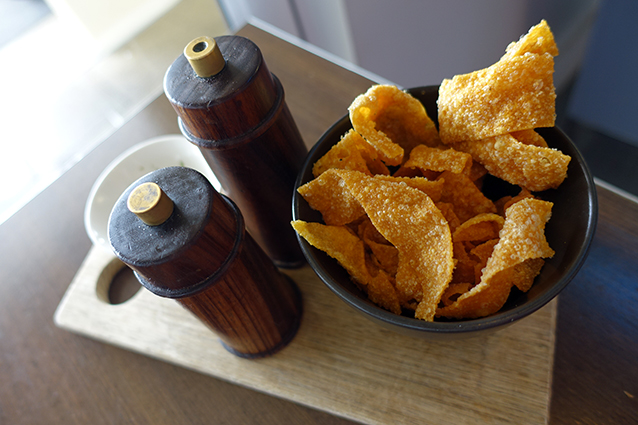 With only a little bit of guilt, I take in the vista and the menu while stuffing my face with complimentary crisps. 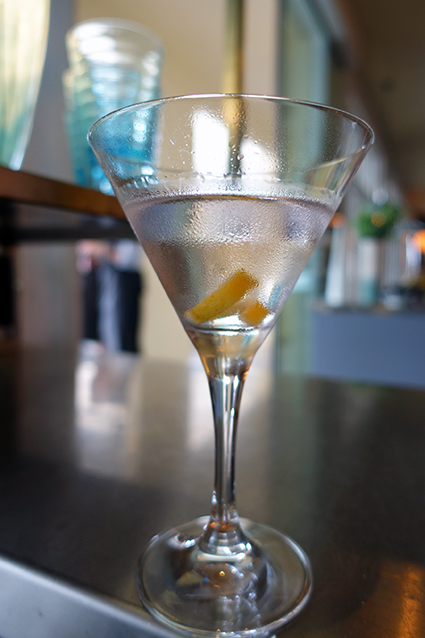 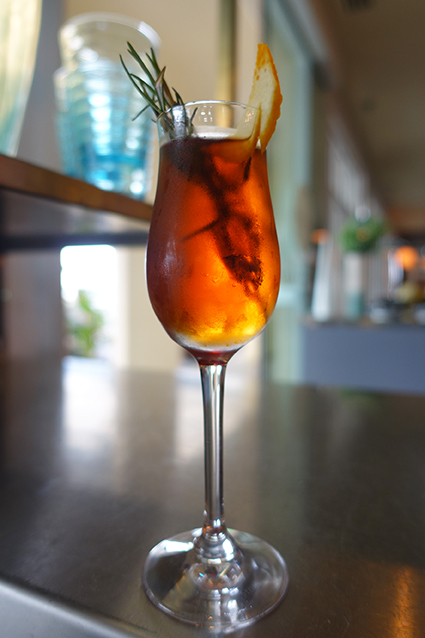 Tasmania's bounty is a definite a menu focus here, so it’s hard to pass up a Martini ($19) made with a Tassy vodka or gin. The bar will make it just made just the way you like it (for me that’s dirty and extra dry) on the gin or vodka of your choosing, which in my case was Hartshorn Sheep&rsquo;s Whey Gin. From their signature list, Aging Gracefully ($21), an aperitif that takes Ron Zacapa 23 Rum, orange cognac liqueur, aromatic bitters, smoked orange and rosemary and a squirt of Lagavulin’s sixteen-year-old whisky, proved a better oyster companion than the martini with its pine-like gin. 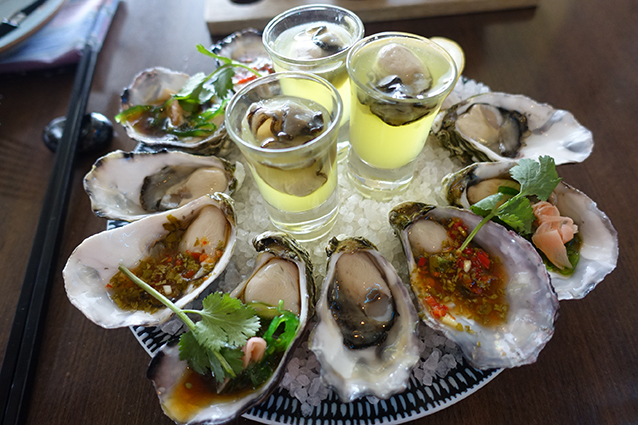 Looking a bit like a science experiment, the oyster shooters were actually the highlight of the Mixed Oyster Plate ($40/12). Rather than the ubiquitous Bloody Mary oyster shots, these oysters are immersed in the kitchen’s own wasabi reduction, which blends wasabi, soy, sakè and various spices. It’s my winner, though I appreciated getting to taste the Tassy Pacific oysters au natural, with a nahm jim vinaigrette, and finally with ponzu, pickled ginger and wakame, as I slurped my way around the plate. 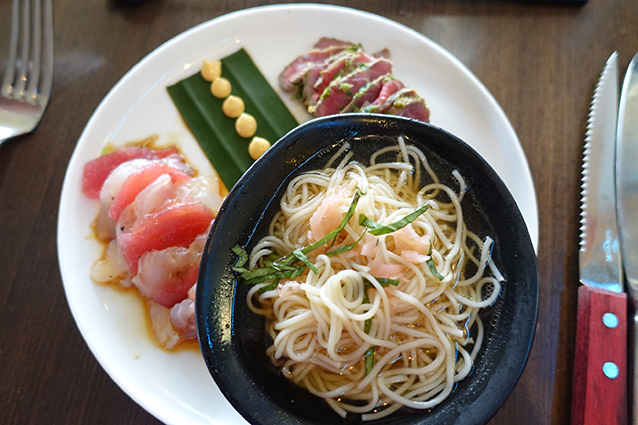 Keeping my focus on Tasmanian produce, I opted to kick off my Two-Course ($60) meal with a Japanese sashimi plate. Arranged around a fairly bland bowl of sōmen noodles, are a row of thin slices of yuzu-seared beef and a colourful array of alternating fishes – yellowfin tuna and blue-eye trevalla – sitting in ponzu. While the ingredients are great, the fishes would have benefited from keener knife-work. 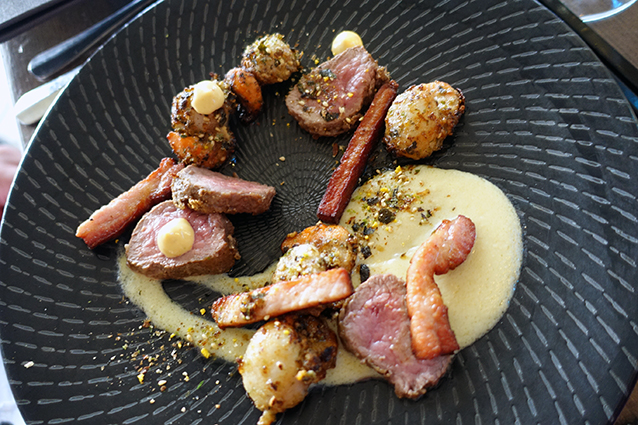 The Mudbarfarm lamb loin (from owner Doug Cameron's farm) and seared scallops felt like the kitchen just stuck a bunch of Tassy stuff that tastes really good on a plate – but who can argue with that? Scallops, in general, across Tasmania are about three times better than they are on the mainland, both in terms of flavour and texture. While I’m not quite convinced they meld well with lamb, both proteins are harmonious with the sweet (shiro) miso sauce, pork lardons, Japanese mint (shiso) and red yuzu; so it's a really tasty plate. 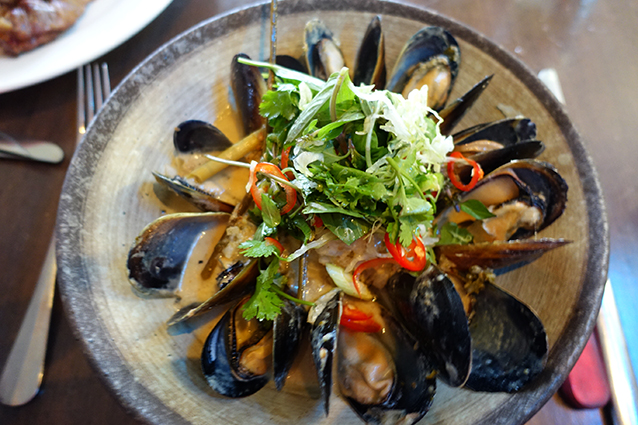 Centred around a mound of sticky rice, the blue mussel lemongrass curry bowl was my favourite mussel dish ever. Every mussel was open and perfectly cooked, taking away the usual diner indecision about whether to pry open a closed shell. The lively, Thai-style curry was made from scratch with whole spices, and when combined with briny mussel juices, it gave you an excellent reason to eat every mouthful of the clever sticky rice. 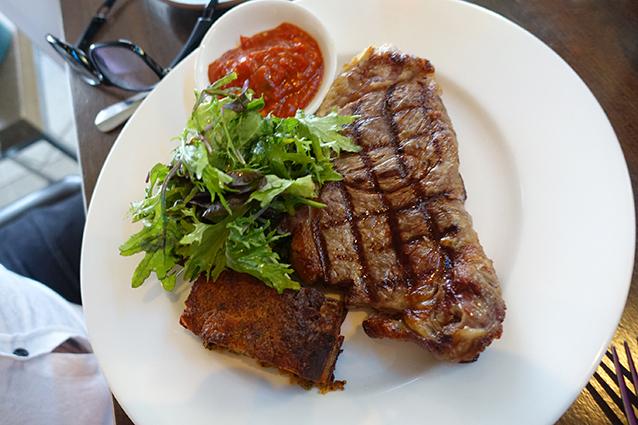 A prime yearling porterhouse steak (350g+) from the charcoal grill is well-cooked and tasty. It provides a perfect excuse to get amongst Mudbar’s excellent wine list, enhanced by Coravin technology, which allows you to taste some of the region’s pricier wines without shelling out for a bottle. 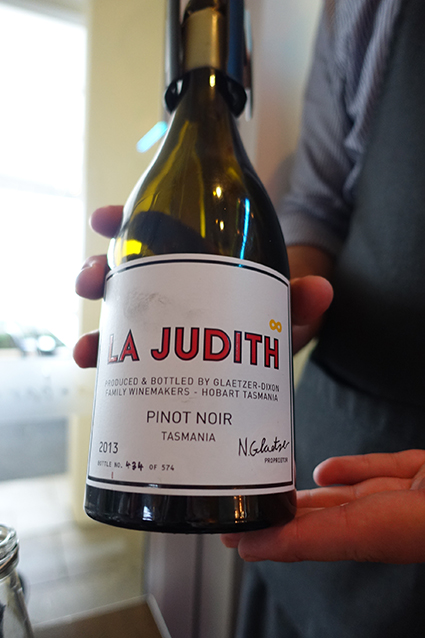 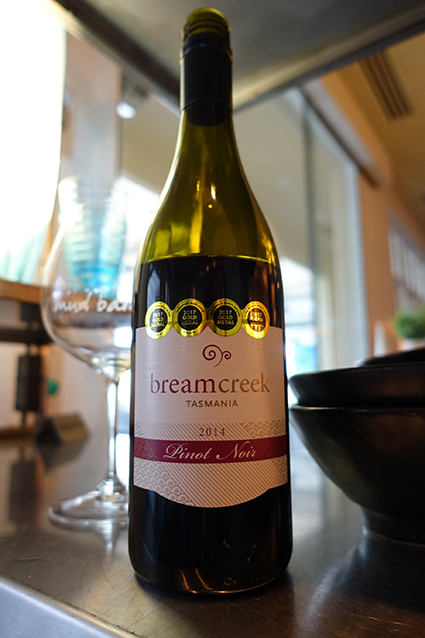 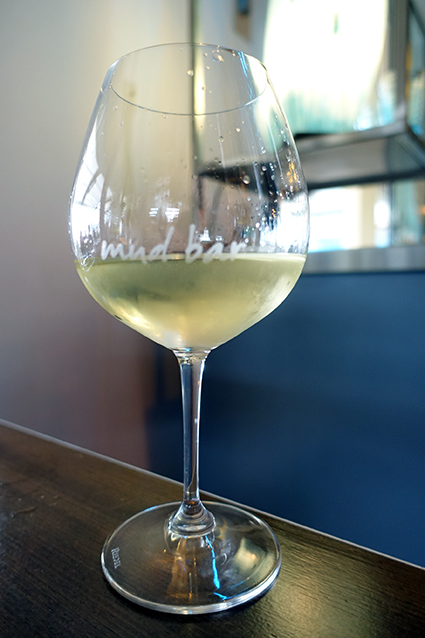 While it’s the first time I’ve coughed up sixty bucks for a glass of wine, I appreciated the opportunity to try the 2013 Glaetzer-Dixon ‘La Judith’ Pinot Noir ($62/150ml) from the Coal River Valley. The wine kicks off with blackberry and raisins; continuing with layers and layers of soft, unfolding texture over dry, lip-smacking acidity. There’s so much going on inside bottle number 434 (of the 574 winemaker Nick Glaetzer produced) it feels like a Sherlock Holmes mystery in a glass: tobacco, lead, leather and stuff I have yet to unravel. For contrast I drink a glass of the 2014 Bream Creek Pinot Noir ($14) that kisses you with dark cherries and chesterfield leather but feels hollow in the middle, and somewhat barbaric after La Judith (named for Nick’s mother).

In battle Chardonnay, the 2016 Hinton Bay Chardonnay ($22/glass) has an old-school style with butter, oyster shell and very evident oak, while the 2017 Tolpuddle Chardonnay ($26.50/glass) is leaner and racier, with good power, a lovely nose, and acidity that will soften over time. 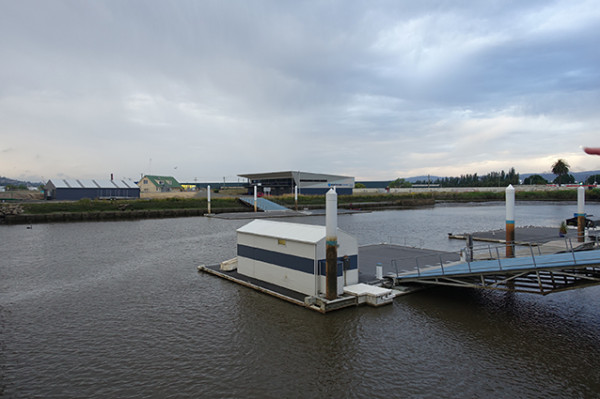 Warm and personable service rounded out a great experience here that made me feel confident I'd selected the right place to dine. And, even with these indulgent wine blow-outs, the bill still scraped in under three hundred bucks.