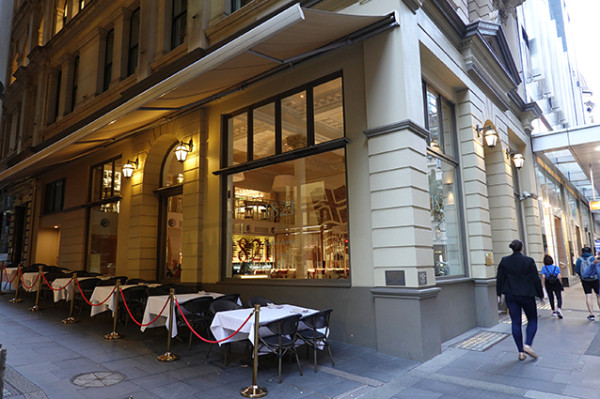 The external architecture is stately, the internal fit-out is soaring and monumental. 1821 made a big splash when it opened in late 2016 with star modern Greek chef David Tsirekas (ex-Perama) at the helm. 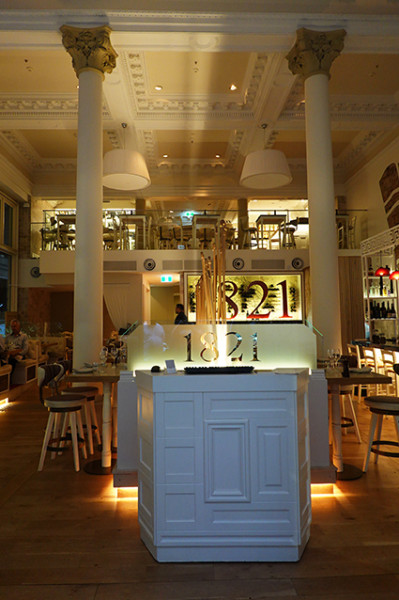 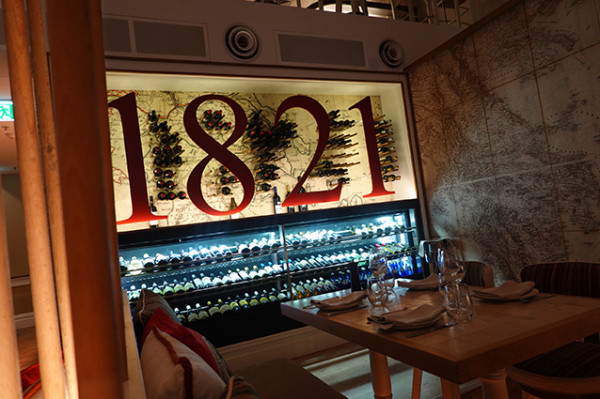 After Tsirekas was poached for some overseas launches last year, restaurateur Jim Kospetas (Universal Hotels) has kept the home fires burning by forging a clever partnership with BlueFish Restaurant Group in Greece. With 1821's menu now overseen by BlueFish’s George Economidis and executed in-house by head chef Luiza Gomes, what you can expect to find are accessible, seafood-focused, contemporary Greek eats. 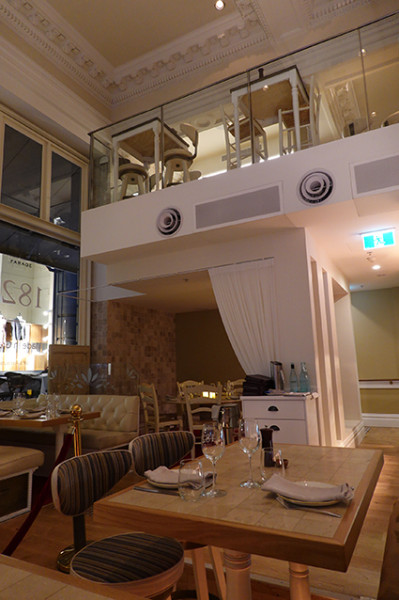 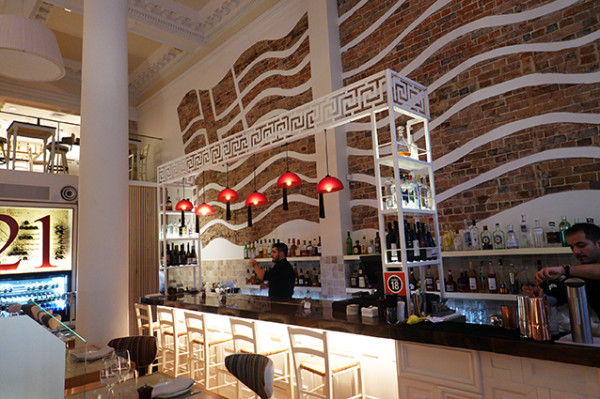 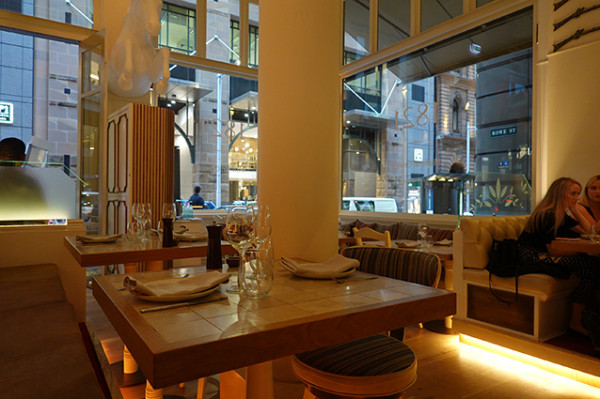 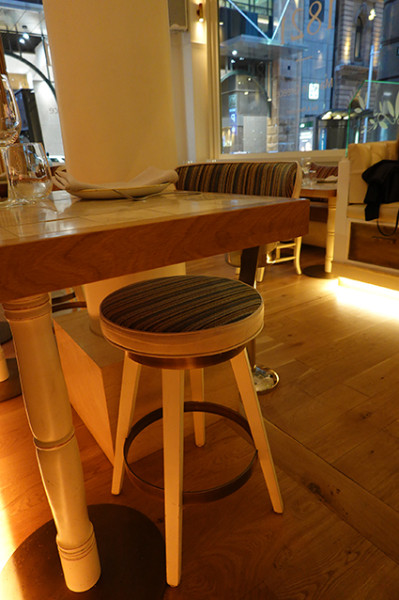 It’s certainly an eye-catching room, with the Greek flag in exposed brick and plaster relief on one wall, ornate columns and equally monumental tiled high tables with cushioned banquettes and soft, pliable stools that swivel for easy accessibility. 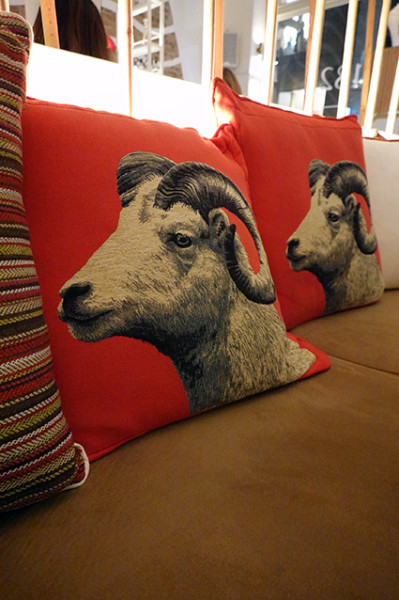 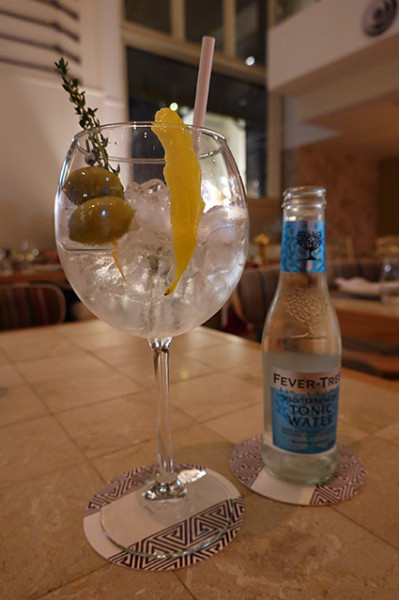 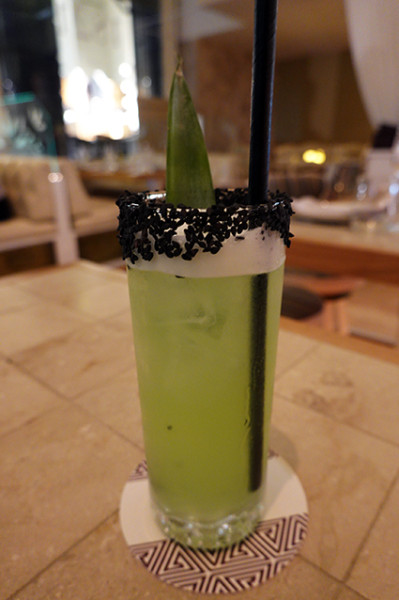 The level of comfort and decent table separation inclines you to relax into the horned goat pillows almost immediately. Sophisticated beverages help too; and Aaron Goodfellow has done a particularly nice job with the cocktail list. His Achilles Heel ($21) is an absolute cracker with melon-infused vodka, bianco vermouth, St. Germain, pineapple consommé, lemon juice, sesame oil and lemongrass syrup. It sounds hectic but it’s so nicely balanced it even made a staunch honeydew melon-hater like me love it before I even tasted the black sesame rim. For something less polarising, Tears & Tonic ($21) takes my favourite Gin Mare and teams it with Skinos Mastiha (a Greek liqueur) lemon peel, olives and thyme with Fever Tree Mediterranean tonic passed separately so you can balance your own drink. 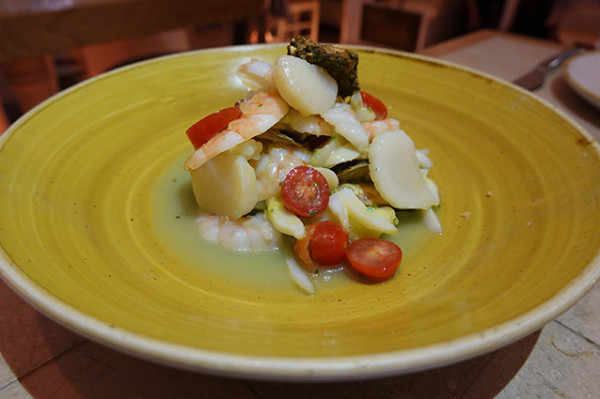 Designed as drinking snacks, the cold mezedes literally fly out of the kitchen. Our appetites are enhanced with a tangy, citrus-dressed Marinato ($28) teaming prawns, scallops, cuttlefish and cherry tomatoes with just the right amount of chilli bite. 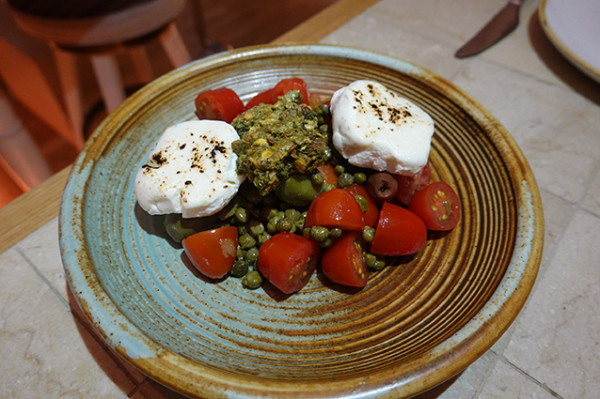 The Cherry Tomatoes ($18) here could make a Coles shopper weep, with their flavour and balanced acidity. They're teamed with Mizithra, a Greek goat’s cheese, green olives and gentle little capers bound with a tarragon olive oil vinaigrette. Adorned with a pistachio crostini, this simple plate is a standout because of the quality produce. 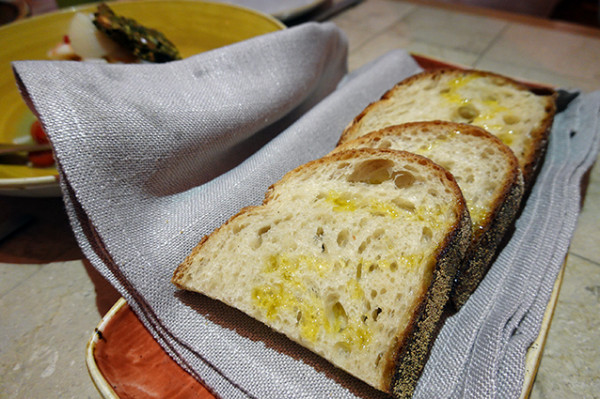 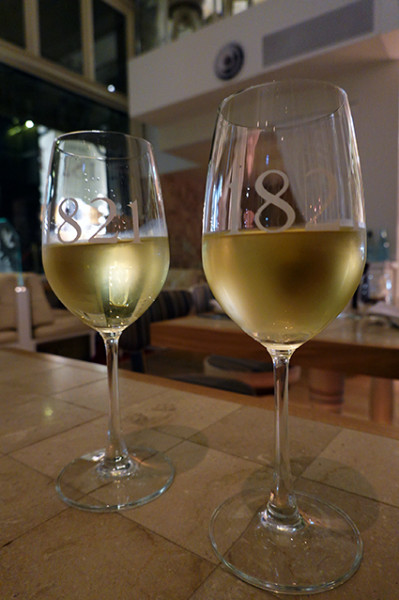 While bread is a bit of a let-down, I’ve got no complaints about wine, especially when served by staff able to make comparisons that guide drinkers towards drinking Greek wines. The 2017 Santo Assyrtiko ($17/glass) drinks like a dry Riesling that – along with flowers and citrus – gives you a minerally blast of the sea. The 2017 Domaine Zafeirakis Estate Chardonnay ($19/glass) started a bit tight, linear and lemony but came up peaches with our pasta dish. 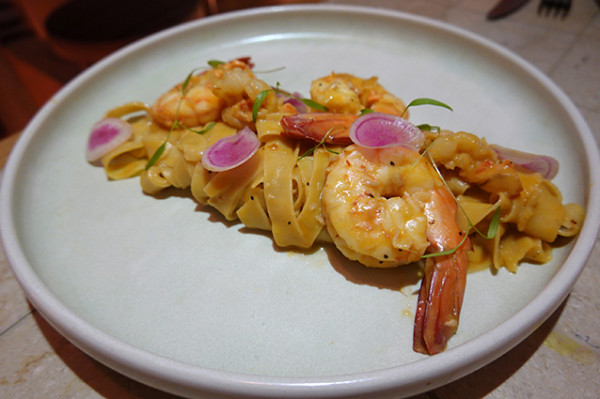 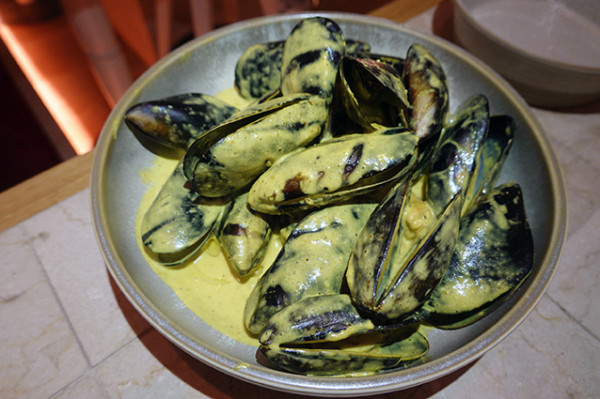 I’m not crash hot on the Mussels ($28). While the plump bivalves themselves are beautifully cooked – as they are in most Greek restaurants – the secret curry mix hasn’t quite been cooked into the coconut milk for long enough, leaving a bitter, floury mouthfeel that, even gussied up with lime and coriander oil, is hard to enjoy. 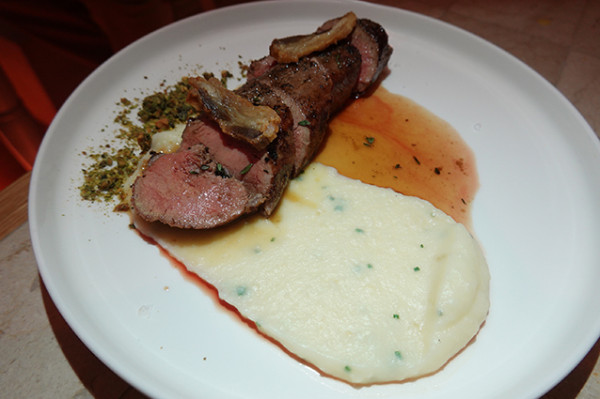 Lamb ($33) – another mainstay of Greek restaurants – is presented Souvla style (cooked over charcoal). The pink-centred meat is beautiful and tender with a salty ring of crackled skin, moderated by potato purée and a very mild demi-glace. 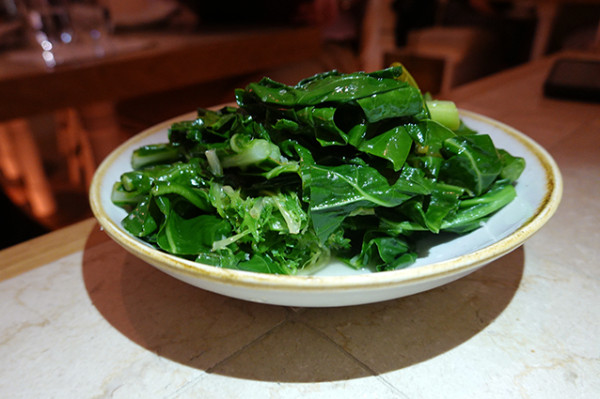 All it needs are some greens – Horta ($7) – a generously proportioned bowl of cooked bitter greens teamed with lemon juice, flake salt and olive oil. You can literally feel the iron working on your body as you wash them down with red wine – a brooding 2017 Lost Turtle Pinot Noir ($18/glass) that actually turns out to be heavier in weight than the Nebbiolo-style Greek red: 2017 Thymiopoulos Estate ‘Young Vines’ Xinomavro ($17/glass) I avoided ordering. 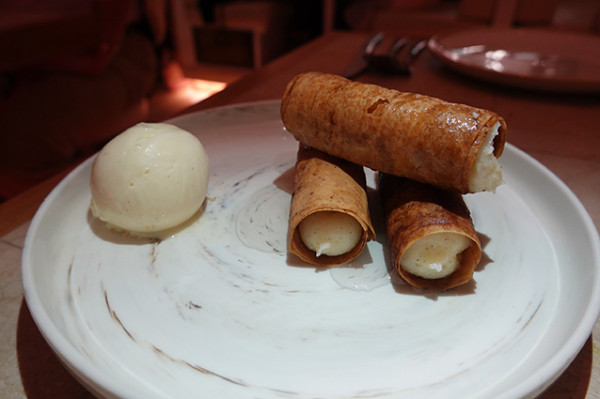 With the lamb less hefty than the usual Greek shoulder, if you don’t order a main to yourself, you’re likely to want dessert. Presented like Italian cannoli, the Galaktoboureko ($17) here is your must-eat. While modern in appearance, this traditional dessert update hits the sweet spot with all the same elements: filo pastry, custard, cinnamon and positively silky vanilla ice cream.

I’m tempted to return to 1821 with Greek friends…