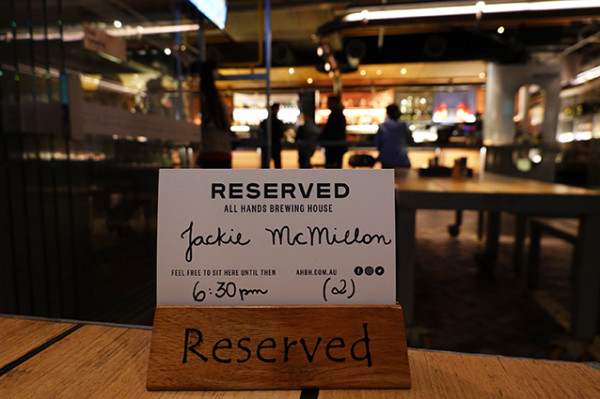 Still shy of its second birthday, All Hands Brewing House is one of the more recent newcomers to the King Street Wharf precinct. It is owned by Red Rock Venues, who kicked off their empire of function spaces, restaurants and pubs in Melbourne. 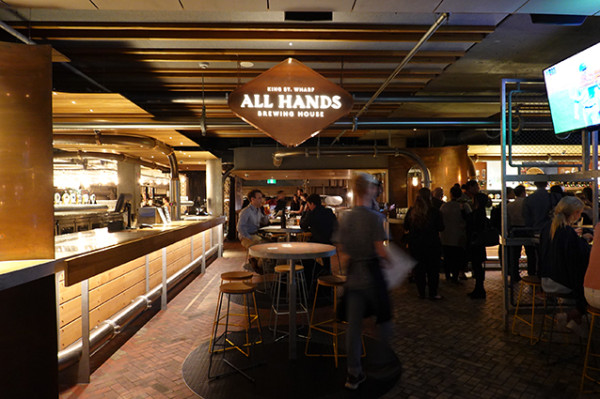 The micro-brewery is one of two forays the group have made into Sydney (they also own P. J. O’Brien’s), and part of an expansion that now sees them operating in four states. 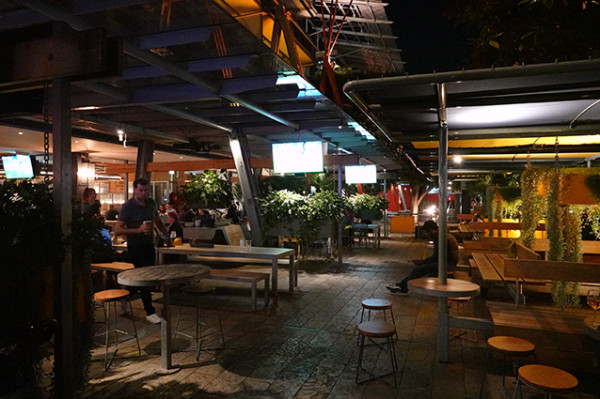 The All Hands Brewing House occupies a prime waterfront position on the edge of Darling Harbour. Fronted by an expansive, dog-friendly, beer garden, it extends deep into the bowels of King Street Wharf. 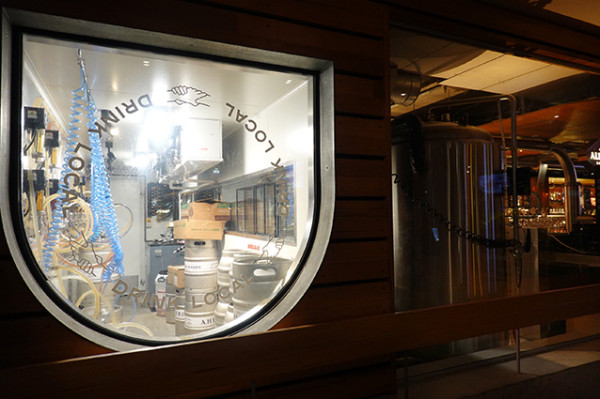 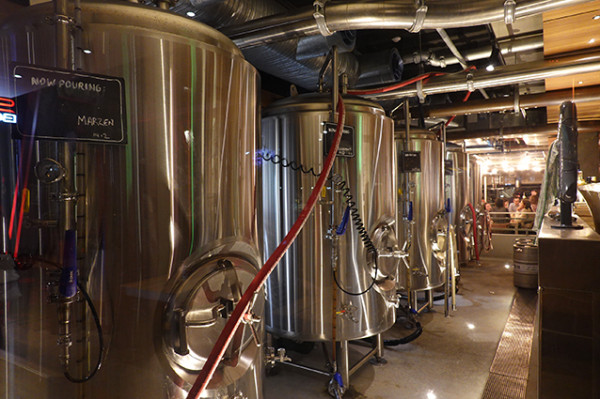 Tucked behind the shiny silver fermenters of the working micro-brewery, you’ll find some more intimate spaces to host your party, no matter how many mates or colleagues you choose to descend with. 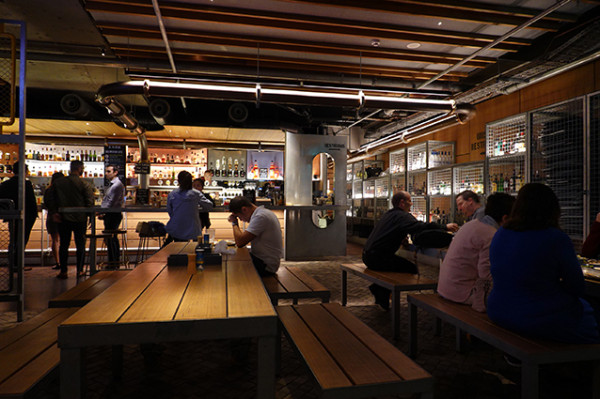 We pull up in the Port Quarter of the busy beer garden for a casual midweek dinner for two. While the wine list doesn’t suck for a brewery – you’ll find a lot of dependable wines that are not overpriced – obviously the main game here is beer. 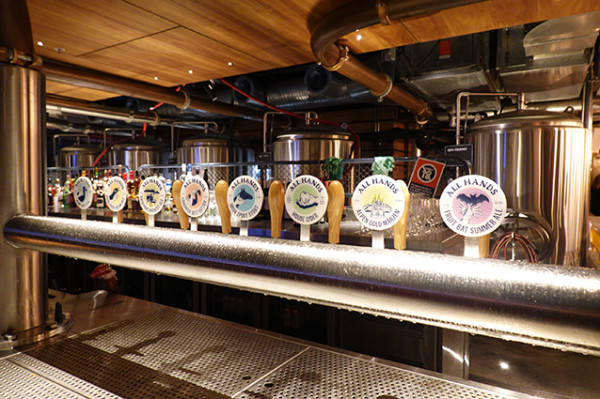 With most of the taps given over to their own beers (as they should be) the All Hands Tasting Paddle ($18) seemed the obvious way to go. 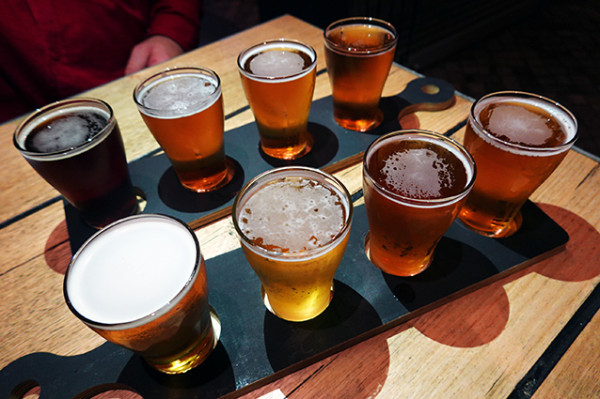 We ordered one apiece, to be able to take in eight of their nine draught beers. 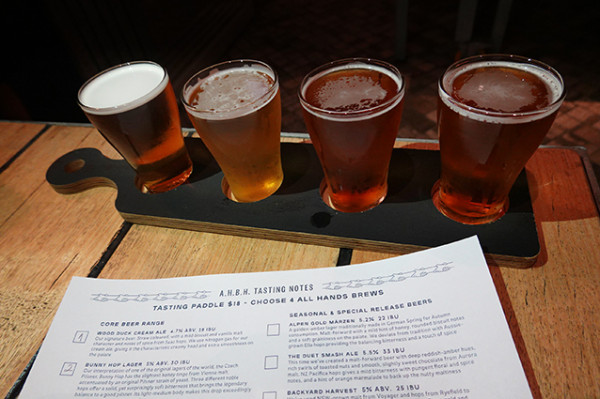 Presented with tasting notes, from the core range my favourite beer was the Fruit Bat Summer Ale ($11/pint), which gives you a last blast of summer with tropical fruit notes from two standard and two rotating types of hops. 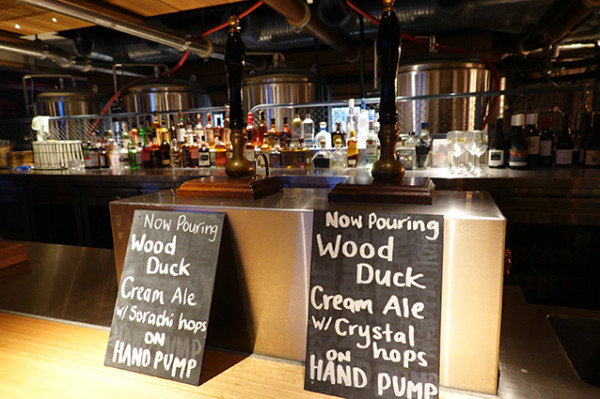 With stone fruit and a spicy end, plus a big burst of hop flowers, the Rouseabout Pale Ale ($10.50/pint) was a close second for me. At only 4% ABV, it’s definitely in the all-day drinker category too. 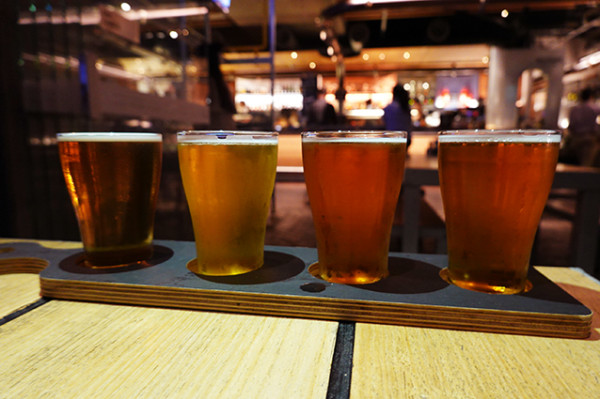 However where I think head brewer Sam Clayman has really struck gold, is in the seasonal and special release beers. My first mouthful of Backyard Harvest ($11/pint) tasted like the Australia I grew up in, where slightly wet lawn clippings mingled with the smoky fumes of the Victa lawn mower. The wet grassy notes come from the use of NSW hops, hand-picked then driven immediately to the brewery for infusion, allowing you to taste the provenance in this fresh, green and citrussy beer. It's certainly one of the most unique craft beers I've tasted. 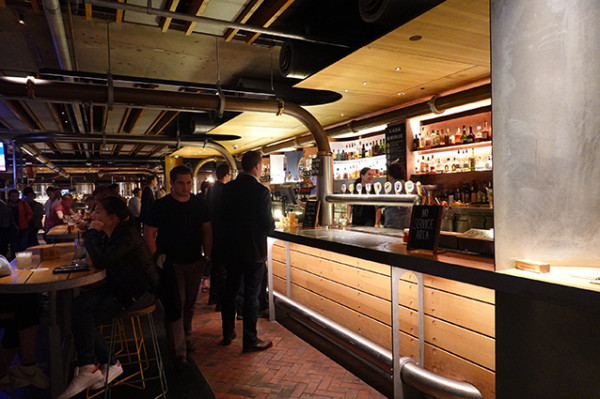 My only real gripe is beer matches are not listed on the menu, knocking out a great opportunity for diners to learn which eats to team with their favourite craft beer. 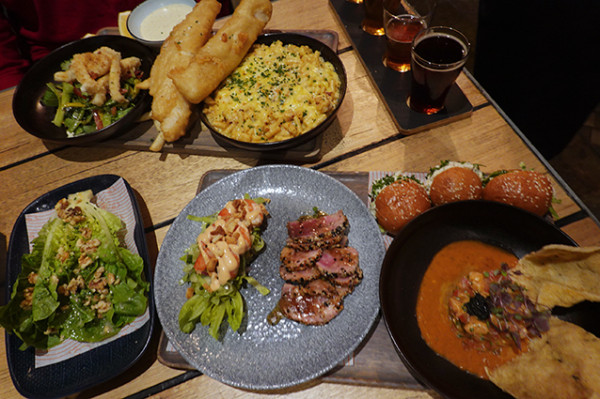 The one-page menu presents a please-all range of dishes running from share plates to salads to smoked items and seafood.  Basically, whatever you feel like eating, All Hands Brewing House has got your back. Wanting to taste across the menu, we hit up the Wharfies Platter ($95) that purports to be for two people, but probably could accommodate a third wheel. Far from greatly reduced portions on an artfully arranged board, it results in our table being swamped in a feast of individual dishes. 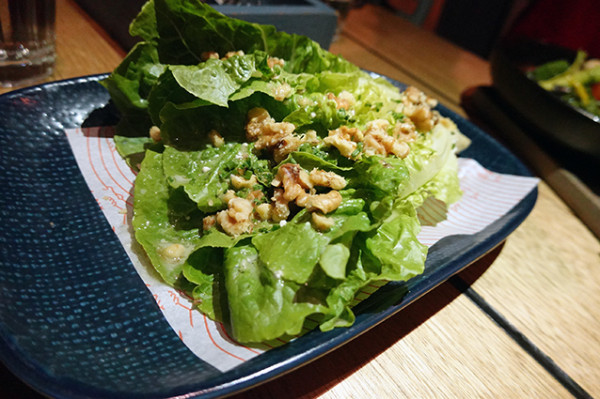 To be fair though, fearing a lack of vegetables, we did add on a Baby Gem Lettuce Wedge ($5) side. While totally unnecessary, drizzled with blue cheese dressing and scattered with walnuts, it was well-priced and quite enjoyable to eat. 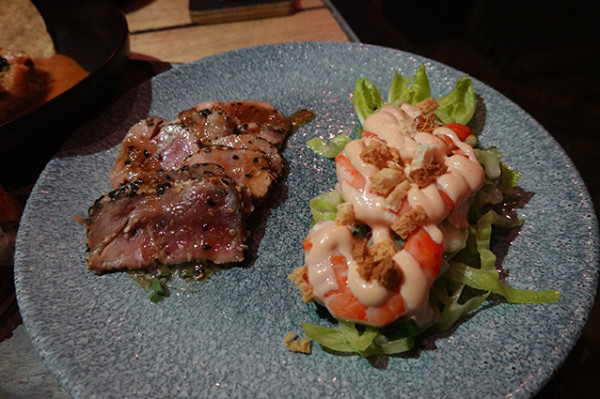 Kicking off with slices of lightly-seared togarashi-dusted tuna was a good way to ease in. While I appreciated the inclusion of a classic – the prawn cocktail – I wasn’t quite sold on the smashed avocado addition it was sitting on (bring back the simple prawns with iceberg lettuce and Marie Rose sauce). 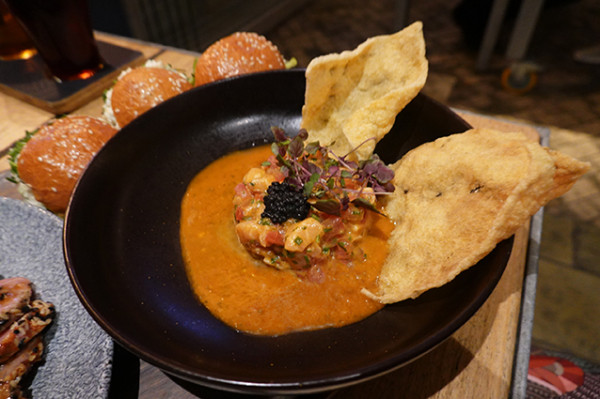 Presented full-size, the Avruga caviar-topped Ceviche of Tasmanian Salmon ($19) was a winner. Eaten from the clever cassava sails, it’s a far from shy and retiring mix of raw fish, chilli, lime and smoked garlic that summons chipotle and South America for me. The Blue Swimmer Crab Sliders ($18.50/3) I would probably skip over. The buns weren’t soft or delicious enough for me, but I do acknowledge that a brewery menu is smart to include some rapid-fire, absorbent, hand-held carbs in the mix. 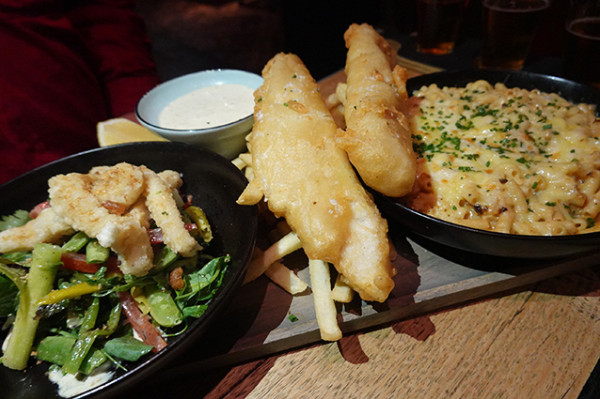 In a batter made from the All Hands Hump Day IPA ($11.50/pint), an alcoholic drop (6.2% ABV) that throws bitterness and pine resin with a lot of different hops, the beer battered fish and chips is crisp and absorbent. I was more taken with the Smokey Salted Squid Salad ($20) that - while frankly seemed a little bizarre, with pickled chillies, sugar snaps, pea tendrils and burnt shallots - turned out to really work against crisp golden fingers of tender salt and pepper squid, mostly because of the intriguing Baja cream. 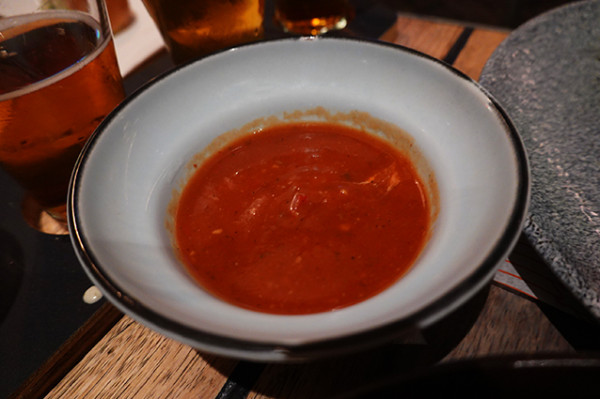 Saucing is something this kitchen does very well. I was blown away by their hot and flavoursome ghost chilli sauce, extracted upon request from the kitchen by our warm and bubbly Brazilian waitress (who incidentally has the same three favourite beers as me). 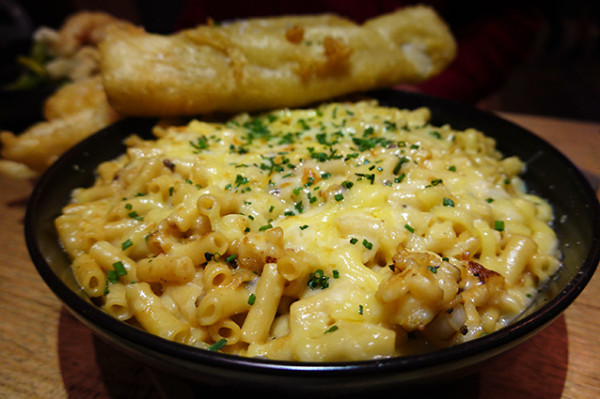 It’s a magnificent way to up the ante on my favourite dish – the Bug Tail Mac’n’Cheese ($34). Presented as a full-size pot of cheesy pasta, this dish has umami in spades. It goes so well with the ghost chilli sauce, I’m sure it has a whisker of it in the mix already, neatly helping you avoid death by cheese.

This one is solid and dependable, especially if you're dining with the masses.