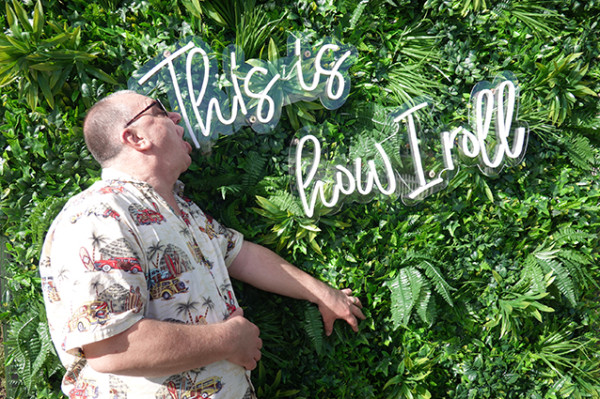 Build it and we will come, seems to be the message South Western Sydney sent to their local Liverpool City Council last month, when they initiated a new multicultural food festival called Liverpool on a Roll. 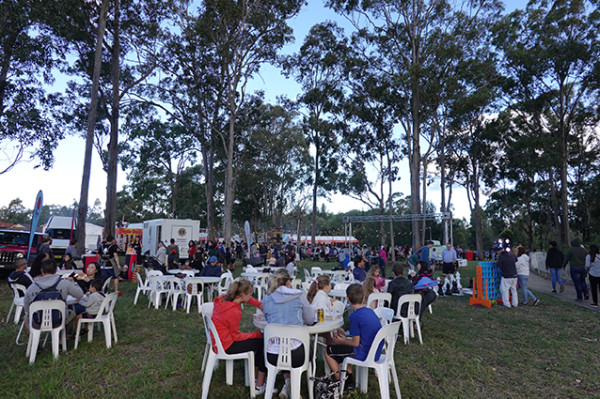 Despite a windy, wet start to the day, as the sun began to leave the sky, more than 10,000 local residents flooded into Greenway Park at West Hoxton. 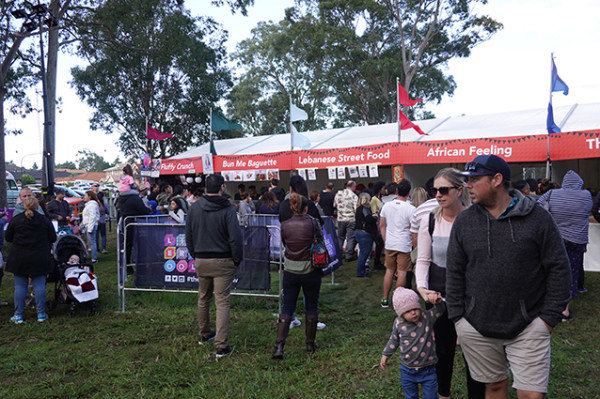 Rugged up in parkas and beanies, families and friends descended in droves to visit two rows of food stalls and a scattering of food trucks. 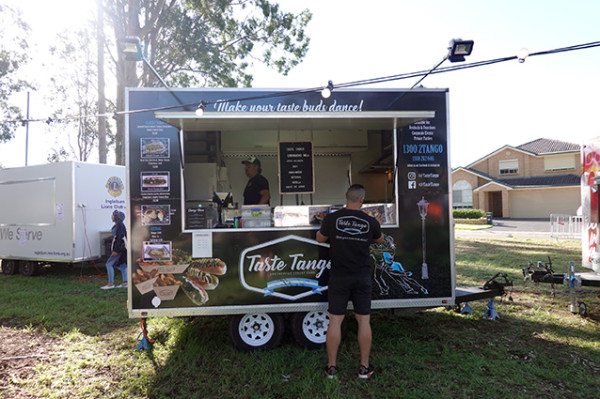 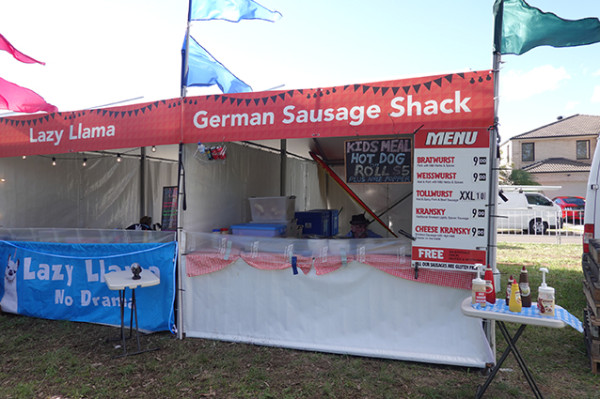 While many, like the German Sausage Shack, riffed off the theme by presenting items on a roll, lots of these local businesses took the opportunity to show residents what they do best. 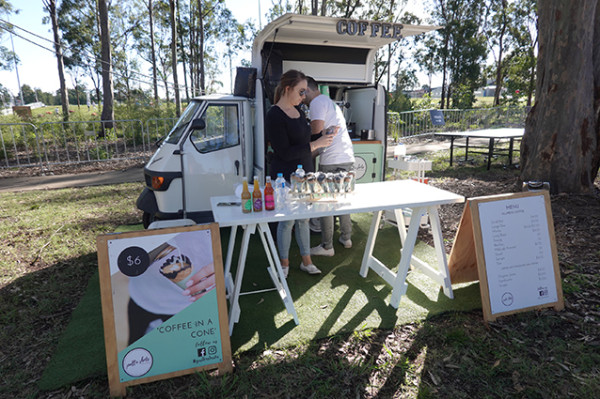 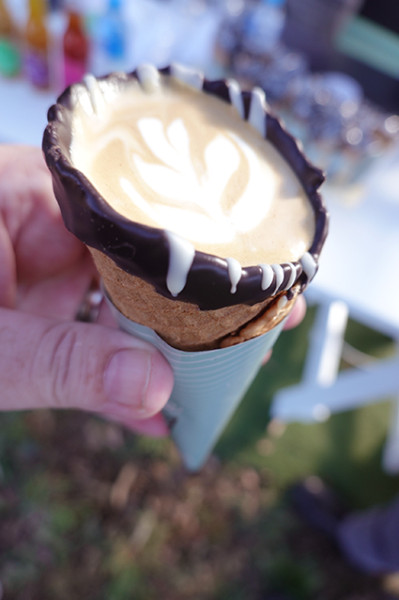 I kicked off my eating adventure with my first Coffee in a Cone ($6) from Pull’n Shots, a super-cute micro coffee van. 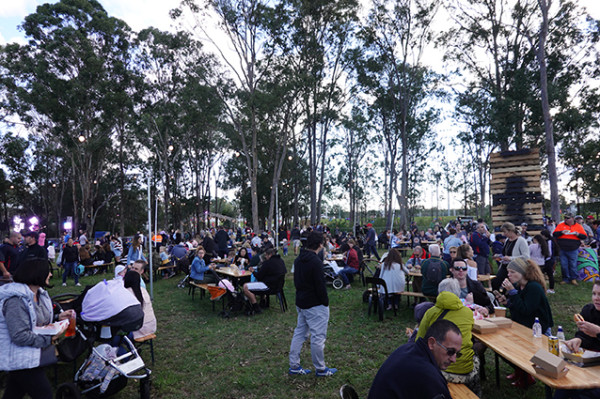 While the dark chocolate-lined cone did contain the coffee reasonably well, I’m not sure this hipster coffee innovation is really for me. 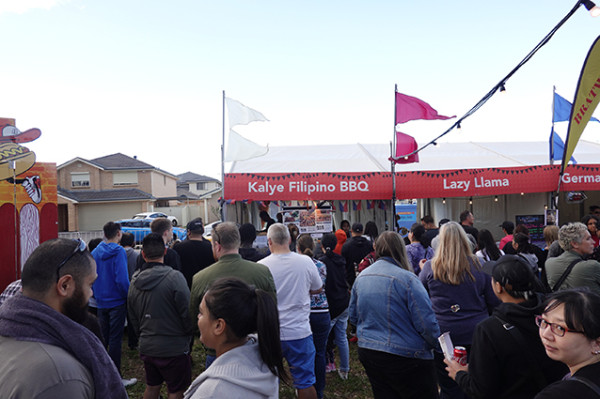 Joining the rapidly growing queue of people following their noses to Kalye, the Pinoy-style barbeque joint, I hit up a Kalye Plate ($12). 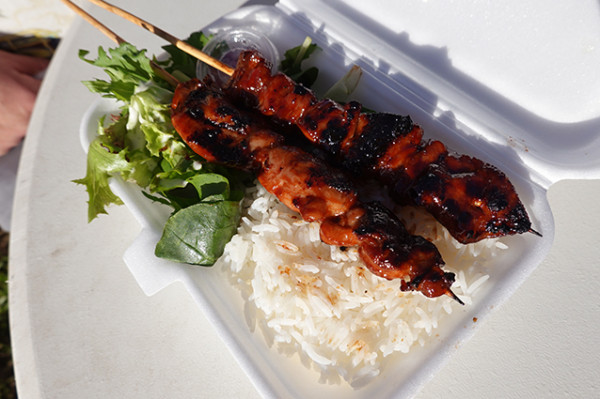 Showcasing their inihaw na baboy, this box teamed the two charred and tender, marinated, grilled pork skewers with rice and salad for a well-balanced Filipino snack. 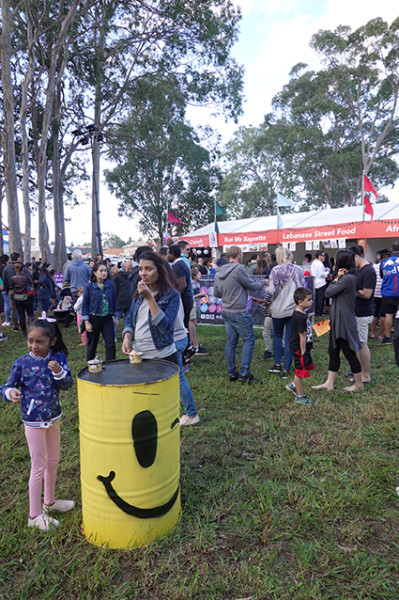 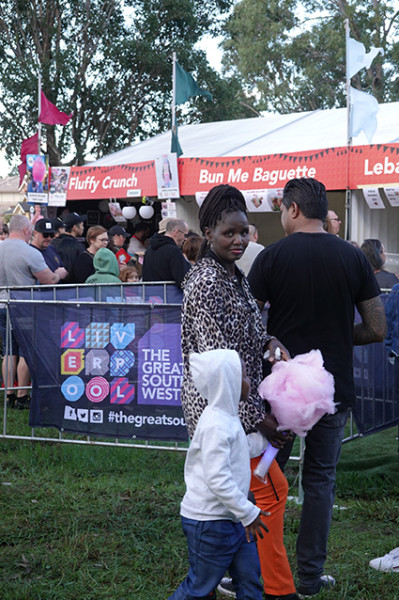 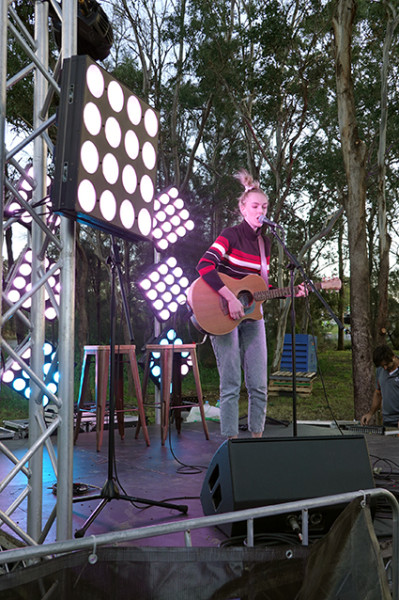 Dodging children clutching brightly coloured creations from Fluffy Crunch, there was more than food to catch my attention. Two stages, one in a licensed area that corralled us drinkers away from the family zone, offered up a range of musical acts including Chipping Norton local Brigida Pirolo. 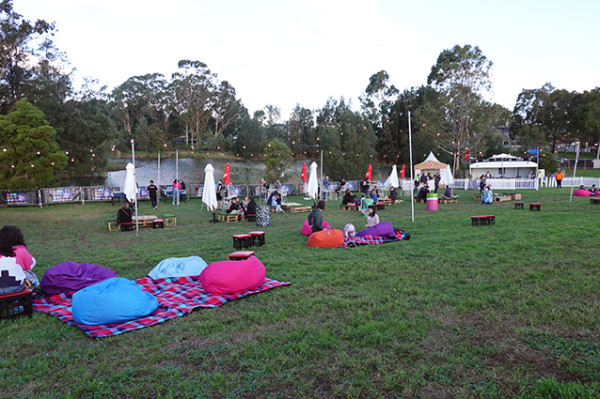 When they weren’t busily eating rolled Fruit Loop-topped creations from Cream’d Ice Cream, the kids were kept happy with lawn games nestled amongst the trees in the parkland setting. 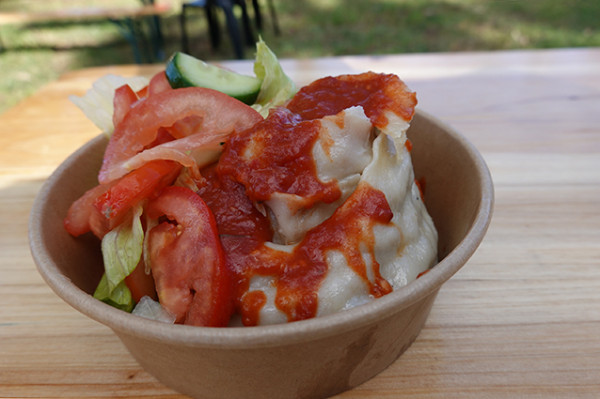 Scattered tables provided plenty of places to eat my first ever Hanum ($12), flower-like Uzbek lamb and potato dumplings. They were drizzled with adjika sauce (a tasty, lightly spicy sauce made from peppers, garlic, spices and walnuts) topped with a simple salad. 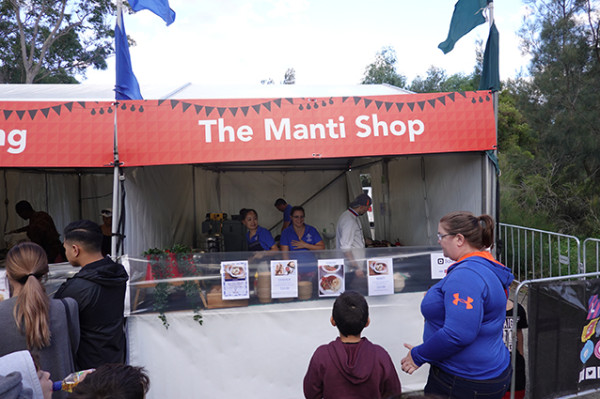 They came from The Manti Shop, a food van owned by the Uzbek and Russian catering company, Samovar. 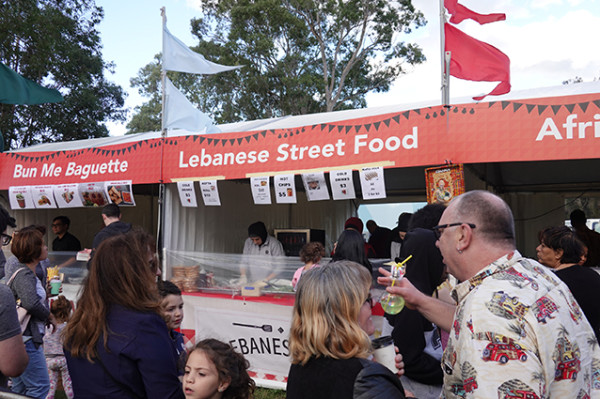 Jumping from Uzbekistan to Lebanon, another of the more than 150 different countries that residents from this local government area hail from, I visited the Lebanese Street Food stall for some walking around dishes. 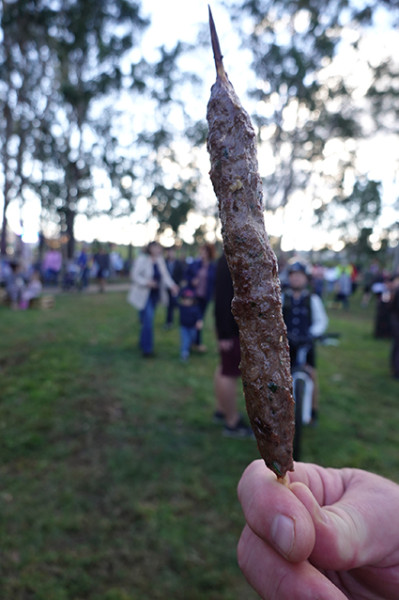 The Kofta Stick ($2) was the cheapest tasty bite I ate all evening, though I was pretty taken with the Kaak ($5) too. It’s a sesame-seed studded haloumi cheese toastie, cooked rather flamboyantly on the charcoal grill. 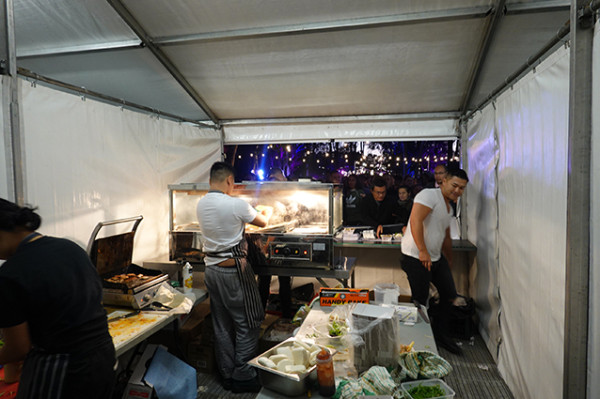 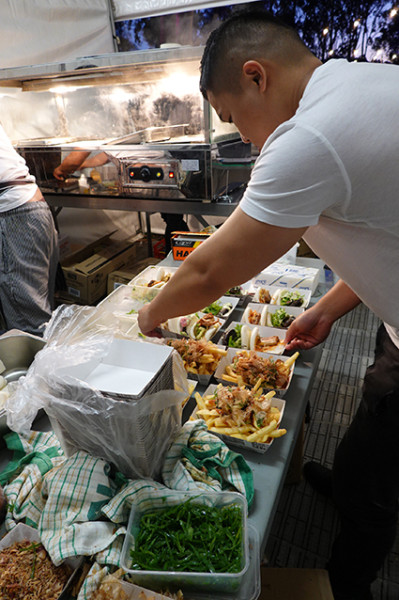 Two hours into the event, which kicked off at 5pm, Casula Powerhouse’s popular Bellbird Bar & Dining stall was 750 bao deep. Chef Federico Rekowski was manning the deep fryer, turning out tray after tray of their popular Okonomiyaki Fries ($8) while chef Steven Pham put the finishing touches on their Bao Sampler Packs ($12/3) that included fillings of crisp pork belly and soft-shell crab. Used to doing volume, their pristine chefs’ whites were so clean they seemed to be glowing when I dodged the queues for a final, backstage glimpse. 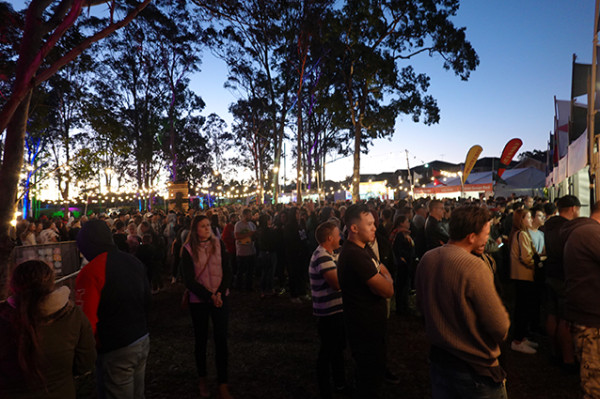 While there were undoubtedly lessons for Liverpool City Council generated by the long queues and vendors that sold out too early in the piece, I have no doubt they’ll remedy these hiccups next year when they build upon the success of this inaugural food festival.
Collapse