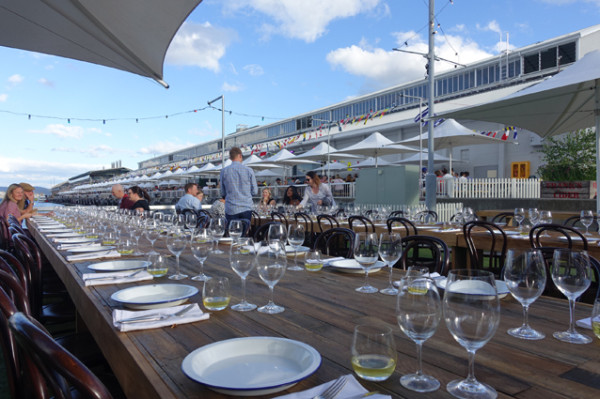 While many of the events I attended at Taste of Tasmania were heavily populated by interstate and international blow-ins, including me, the Luke Burgess Dinner ($160/head) I attended was the big exception. 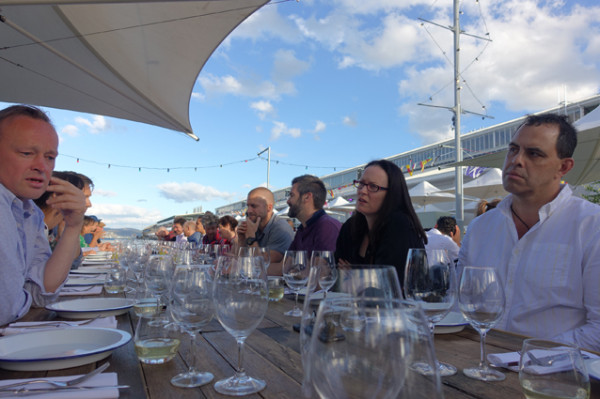 Burgess clearly made an enduring impression on Tasmanians at his former restaurant Garagistes, despite it closing back in 2015. 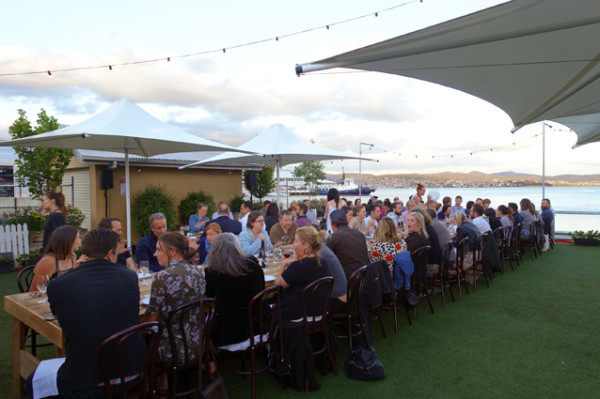 The nurses I sat with credited Burgess with starting them on their journey toward seeing food as pleasure rather than simple sustenance. They were pretty convincing – especially as they were breaking with their now vegan diet to enjoy this dinner. 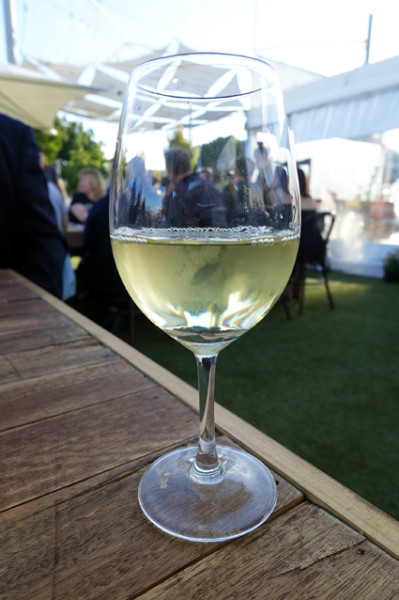 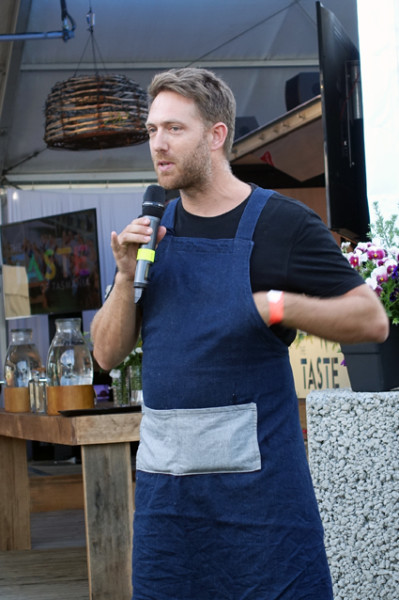 Over quite a few bottles of 2017 Sinapius Home Vineyard Chardonnay – wine dinners down here don’t follow the stingy Sydney model – I took the opportunity to learn more the island state from people who actually live in it. 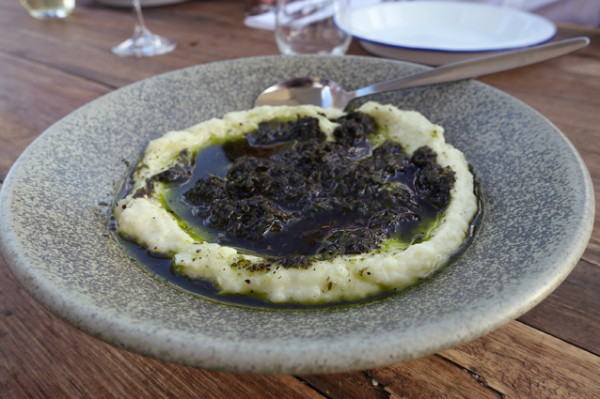 “All the vegetables were in the ground today,” explains Burgess by way of introducing his menu-free meal and his overall cooking philosophy. 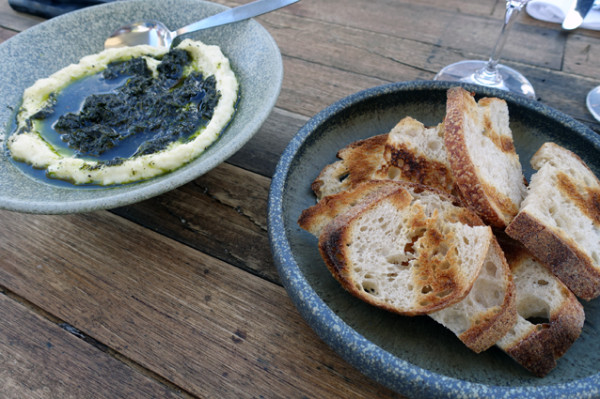 Burgess prefers to cook with what the fisherman has caught that morning, and the farmer has harvested that day. 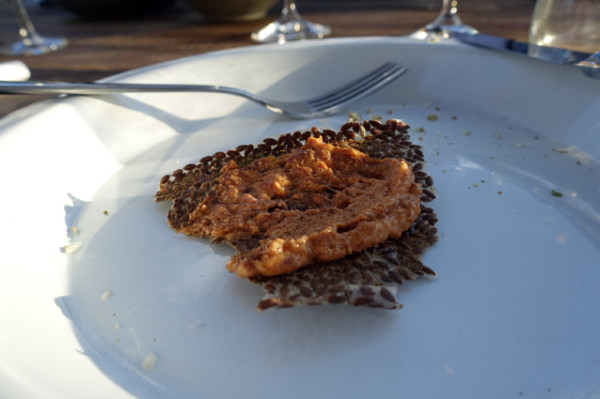 Our grumbling tummies were quickly sorted with linseed crackers topped with puréed salami. 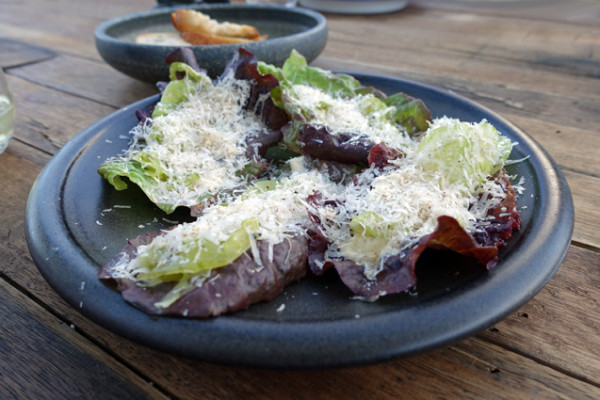 We moved onto lettuce leaf boats filled with sweet green onion then dusted with Pecorino cheese. 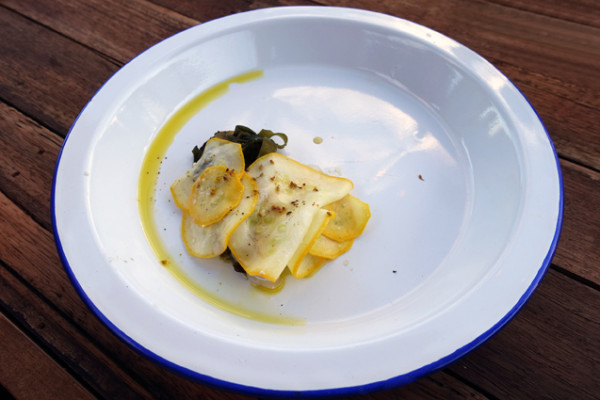 It’s all very simple, with Burgess relying upon the freshness of the produce to elevate each dish. Most of the dishes are presented family sharing style, though we each get a little plate of ling treated with koji and salt, served with wakame salad and green tomato juice under thin slices of summer squash. 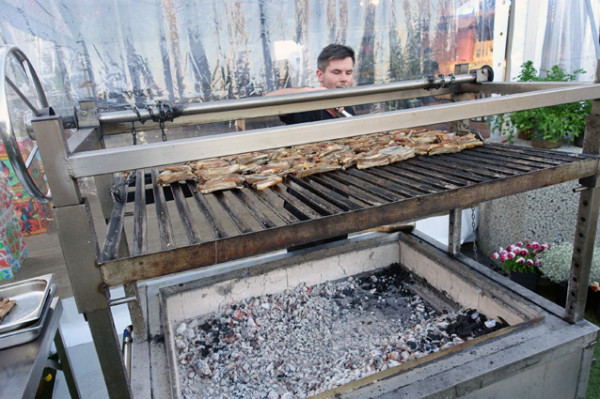 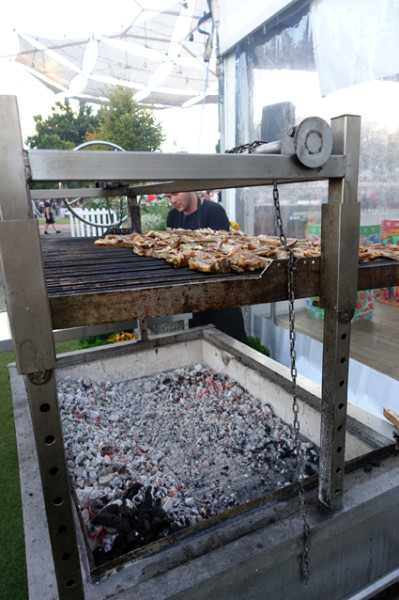 Cooked over hot coals, lamb ribs are next on our agenda. 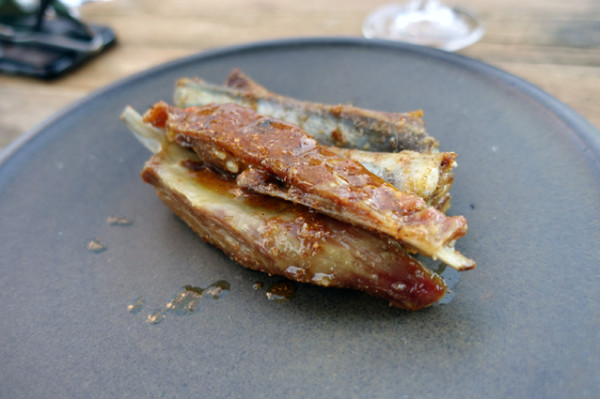 The super crisp fat is a highlight against the gently flavoured lamb. 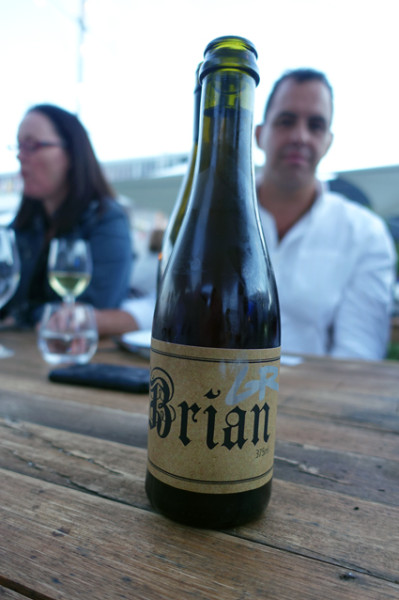 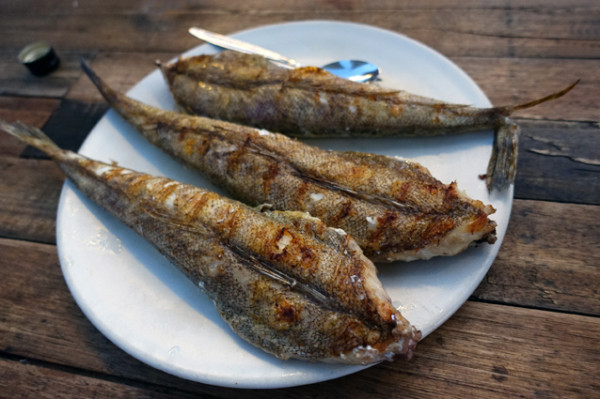 With them we move onto a wine called Brian – the 2017 Brian 3 Pinots (375ml) to be precise. It’s made from Pinot Noir, Pinot Meunier and Pinot Gris and has a juicy, refreshing fruit-driven flavour with a spicy finish. 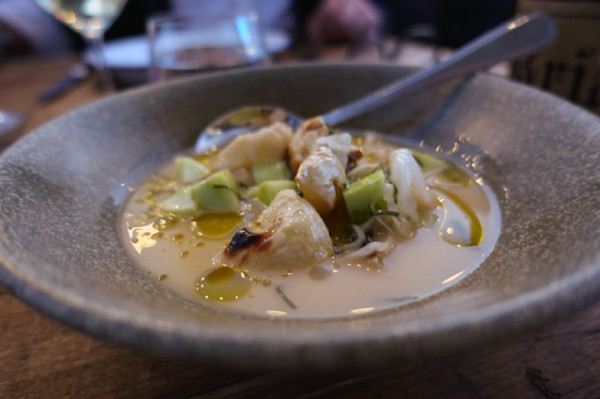 As we each skewered our own flathead and consumed the simply cooked fish against turnips and young onions, we could hear Mojo Juju warming up the crowd on the festival main stage. 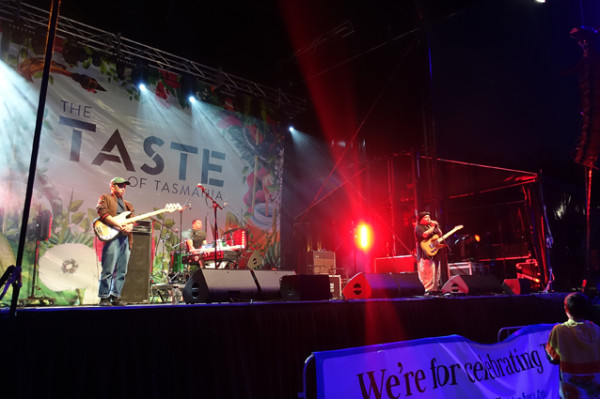 While Burgess rustled up our dessert, I ducked out for a peek. 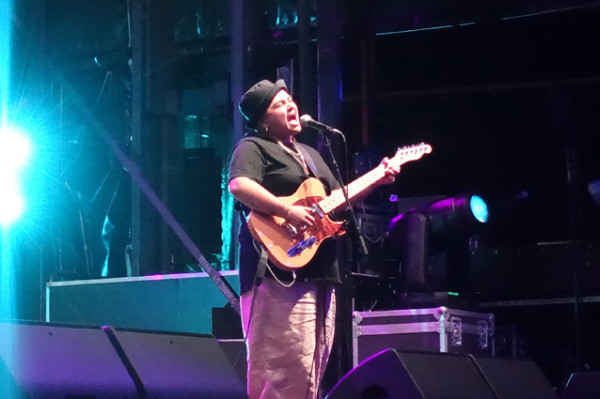 Looking much more comfortable singing their own material than they were on New Year’s Eve forced by the promoters into a strange thematic duet, Mojo Juju held the audience enthralled with their emotional and political songs. 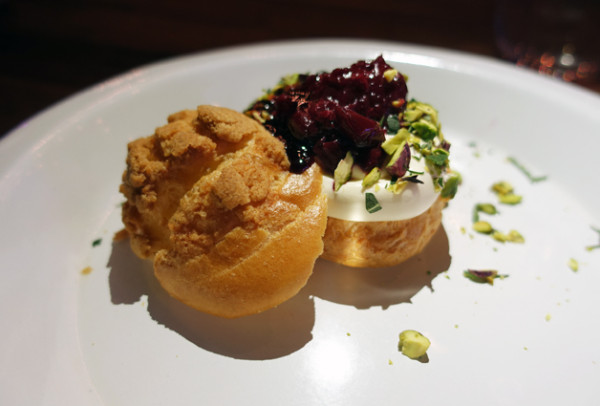 Playing to the home state’s excellent cherries for the plate's only sweetness, our profiterole dessert was just the ticket to end a fun meal with newfound Tasmanian friends.

Inspired by the Burgess dinner, the next day we took a produce drive that saw us sample multiple varietals of cherry. 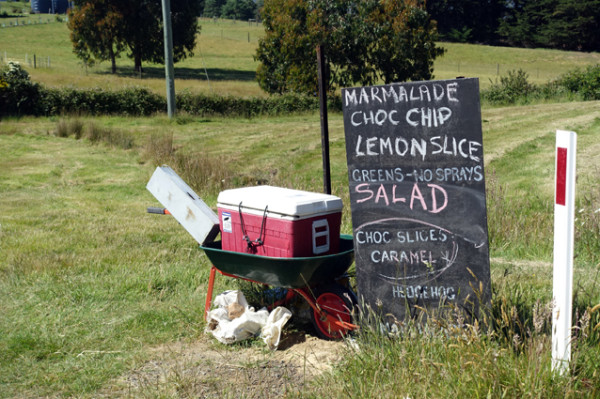 However, the best pitstop we made was this chilly bin in a wheelbarrow by the road in Pelverata. It lured us in with a chalkboard promising spray-free salad greens, marmalade and more cakes than your average cake stall. 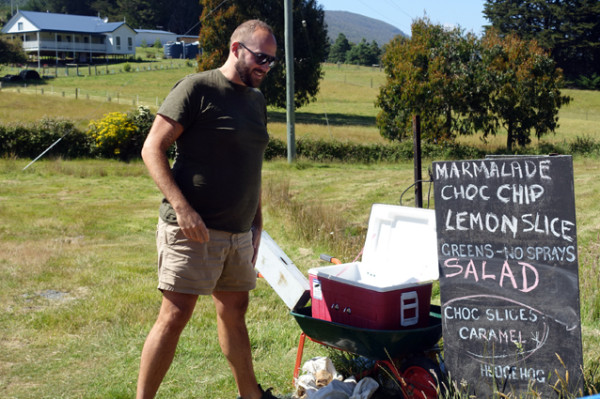 We lifted the lid and filled the honesty box, taking away an array of treasures from honey joys to lemon slice and chocolate chip cookies, all neatly hand-packaged and labelled with honest ingredients and a best before date.

In between cherry stops, we pulled in at Banjo's Bakery Cafe. This affordable Tasmanian bakery chain captured my attention by promising six scallops in every Scallop Pie ($8.50). 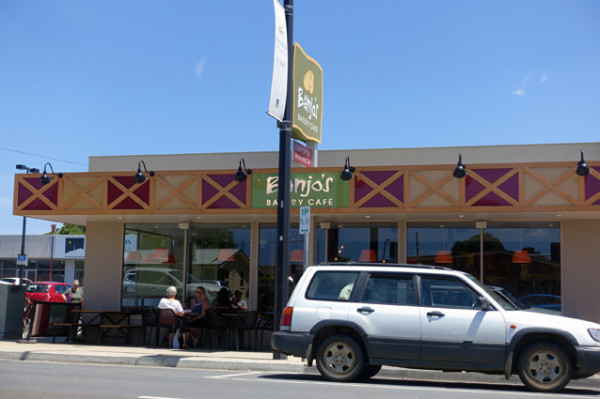 We counted seven in ours, though didn’t rate this pie’s pastry or the super-mild curry flavour. 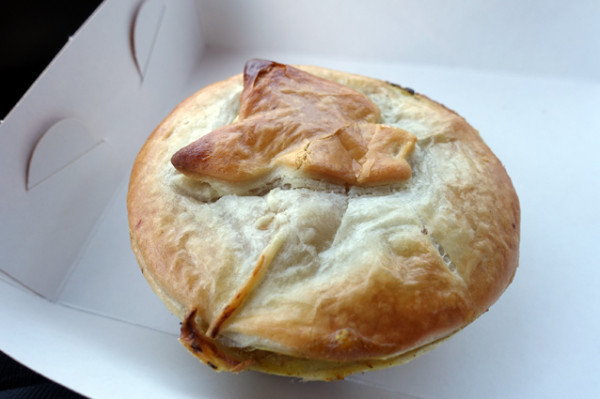 Using super-tiny scallops meant they weren’t as toothsome as the big ones I liked at Doo-Lishus.