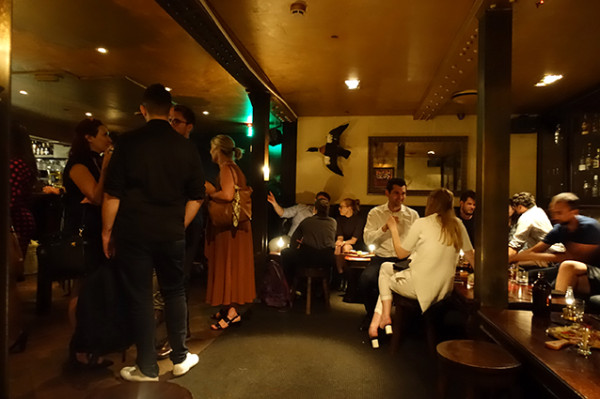 With the cool weather starting now, my palate has moved from gin to whisky. To get ready for the winter season, I visited a couple of whisky bars to keep you informed about where to drink this warming amber spirit. First, I got reacquainted with an oldie but a goodie – Eau-de-Vie in Darlinghurst. I was reminded of Sven Almenning’s moody speakeasy tucked in the rear of the Kirketon Hotel because he recently embarked upon a three-million-dollar equity crowdfunding drive for an upcoming bar venture. As all that Almenning touches usually turns to gold, it seemed  like a great opportunity for customers to get in on the ground floor on a Nick & Nora’s Melbourne after the successful launch of Nick & Nora’s Sydney in Parramatta. 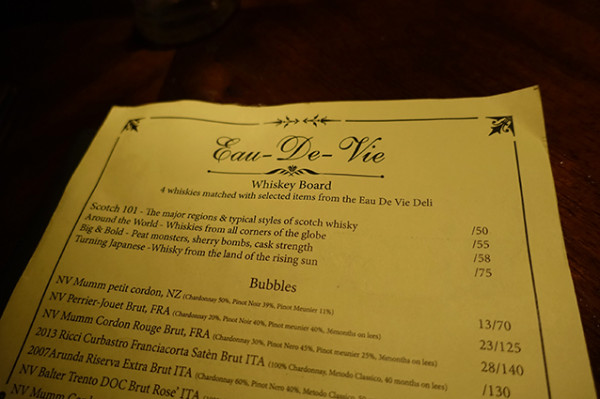 Almenning’s strength is in his training and his people - just recall former star bartenders, Luke Redlington and Max Greco. Today, just showing a modicum of interest had one of the bartenders embark with me upon a lively discussion about the perks their cluster of future bar-owners will receive in The Speakeasy Group venues. Having the forethought to make a table reservation means despite landing in a loud and busy bar, we’re whisked straight to a lounge for our whisky board. From the menu of four flights, we opt for Scotch 101 ($50/each). 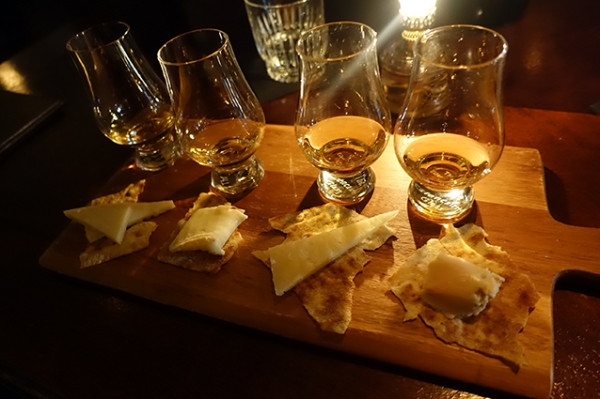 Presented on a wooden board with an accompanying cheese and cracker bite from the Eau-de-Vie deli, our whisky flight kicks off with the Aultmore 12-Year-Old. It’s a fairly simple dram that’s light and fruity, from a Speyside distillery that’s been bottling whisky since 1897. It’s matched to Primo Amore – a red-wine infused Italian cheese. Matured for 16 years in bourbon barrels, the Ancnoc 16-Year-Old has a bit more going on with vanilla and cereal notes, plus a good bit of wood. It’s teamed with an Italian soft cheese – Taleggio – that smells funky but eats creamy, bringing up some fruit in the whisky. Chalky Manchego, a Spanish sheep milk cheese, is teamed with the 12-Year-Old Old Pulteney. It’s a good balance to the whisky’s sweetness and faint salty lick. The best whisky on the board to my palate is the Talisker 10-Year-Old, which is the only smoky whisky. It's got a hint of pear-like sweetness, and some earthy swampy qualities, plus peppery heat on the finish. Eating a strong cheese like Gorgonzola with it, lowers the smoky dryness, and brings up the whisky's sweetness for me. 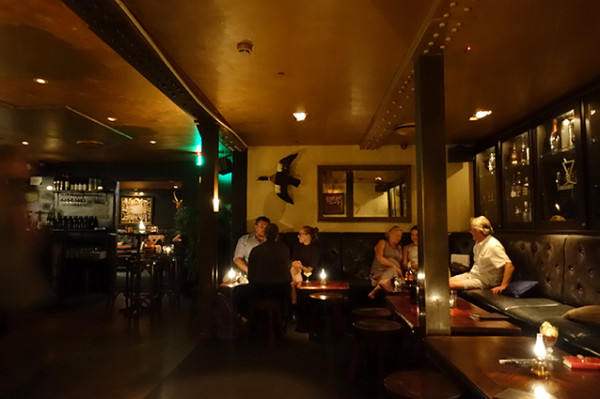 While we've had our noses buried deep in the glass, the bar has emptied out and become the relaxed speakeasy I first visited nearly a decade ago. It's been fun getting reacquainted with it over four wee drams.

NOTE: You can see previous reviews of this venue HERE and HERE.