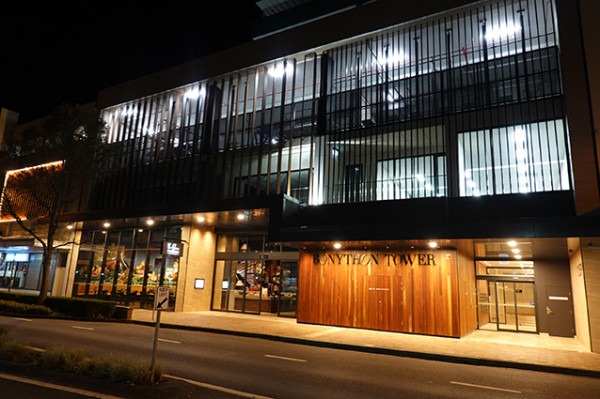 Gosford can elicit a bit of cultural cringe from Coasties who would rather be identified with prettier parts of the Central Coast. Australian business legend, John Singleton, is set to change all that with The Bon Pavilion. You’ll find his new restaurant on the main street of Gosford – a stone’s throw from the waterfront – at the base of his new 14-storey, luxury development, Bonython Tower. 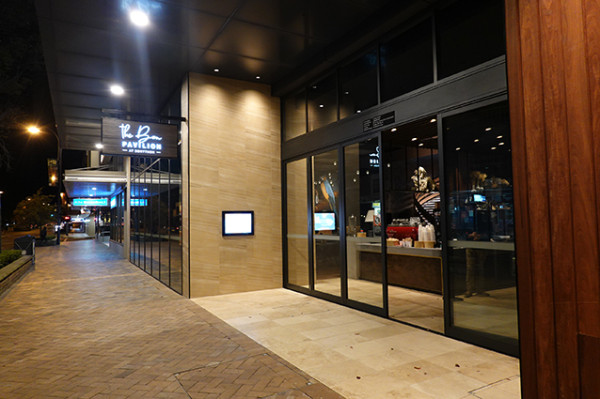 Singleton is no stranger to the Central Coast, with luxury accommodation Bells at Killcare and Pretty Beach House, and glamour bakehouse, Saddles at Mount White, in his extensive portfolio. While Singleton’s second luxury tower in Gosford, Ravello Residences, is busily making record price sales off the plan, the entrepreneur already has his eyes upon making the surrounding area attractive to his new high-end residents. To help his new Coasties avoid unnecessary ninety-minute drives between Gosford and Sydney, Singleton has installed executive chef Sean Connolly at Bon Pavilion. 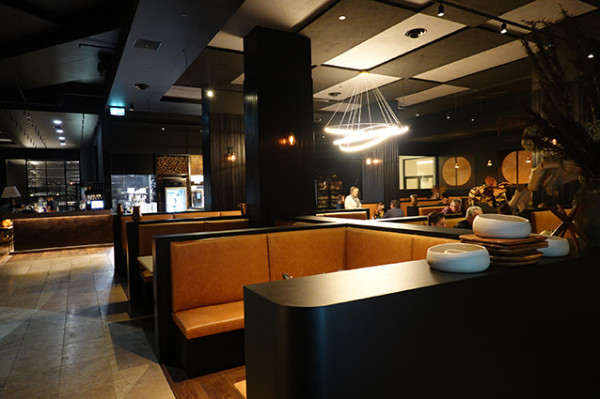 I’ve been a fan of Connolly’s cooking for more than a decade, kicking off with a 2008 meal at Astral, moving through half a dozen visits to The Morrison Bar & Oyster Room, and even a bit of stalking across the ditch in Auckland at The Grill by Sean Connolly. Connolly creates deceptively simple cuisine that wins on flavour. His other strength is in his people – having a finger in so many spaces, Connolly smartly assembles dependable people who can ensure each space stays consistent with his vision. At Bon Pavilion, that’s Liam Mundt, a Connolly-veteran who has relocated his life to the Central Coast. 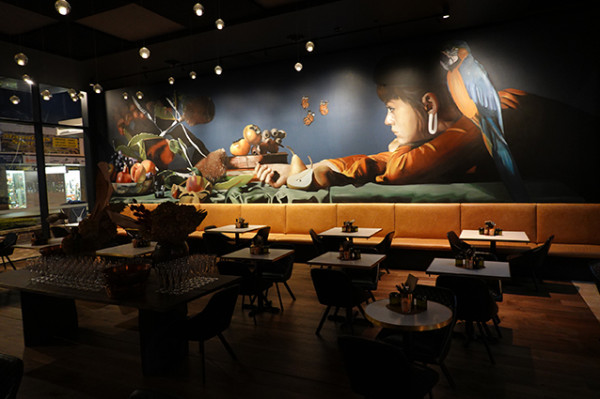 Mundt takes me through the expansive open venue, kicking off with their day-time café with its eye-catching mural. Commissioned by Singleton, the impressive wall-length mural by Adelaide mural-icon Lisa King, summons the three Fs: food, local fauna and the feminine form. It’s a lovely backdrop for a relaxed space where you can enjoy a decent coffee on a padded tan banquette if you happen to miss your train, or find the highway traffic is giving you the shits. 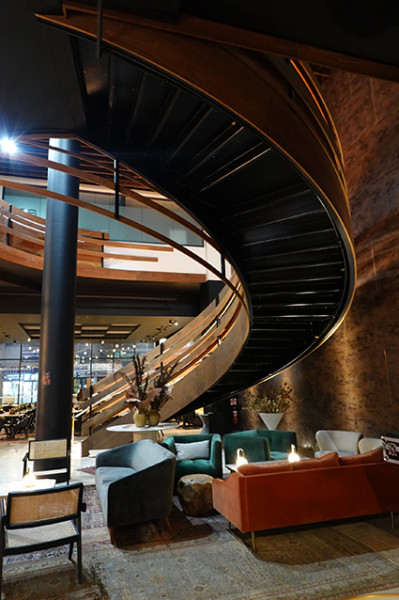 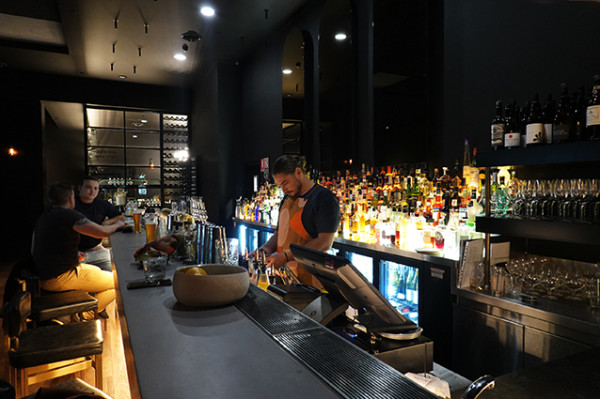 Walking past the room’s centrepiece – a magnificent, weight-bearing sweeping staircase – you’ll find a well-stocked sports bar, complete with screens so you can keep track of the action. 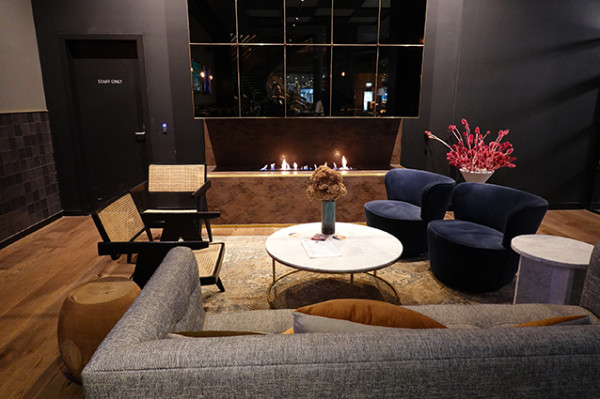 If a red wine enjoyed in a comfy fireside nook is more your speed, The Bon Pavilion has also got you covered. 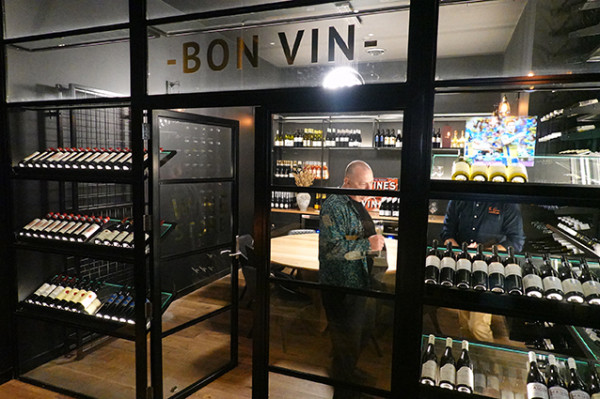 They can even supply you with a takeaway bottle for later via the Bon Vin wine room... well they can when their off-licence comes through. 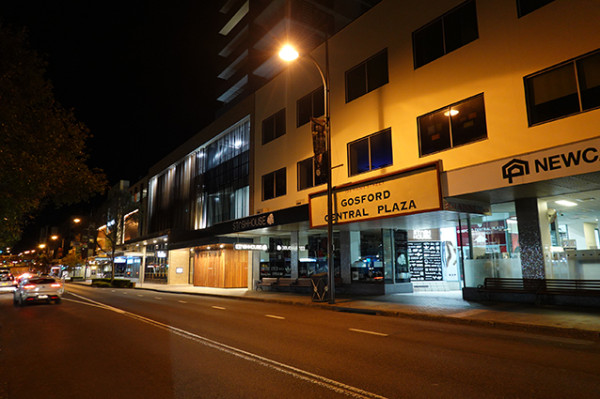 Despite arriving to an almost completely deserted main street at just on six at night, by the time we’re settled in our own burnt tan booth we’re joined by ninety fellow diners. 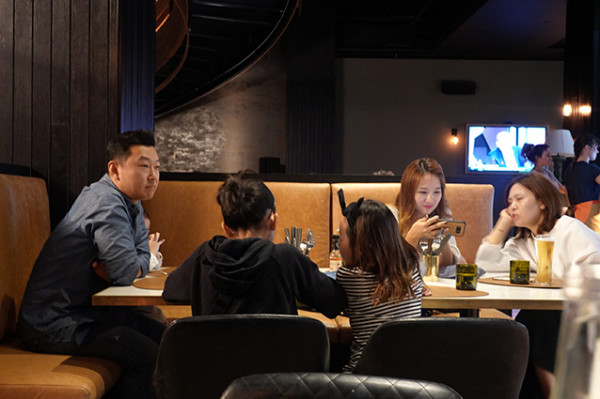 The crowd is mostly family groups, tucking in for a comforting Sunday night dinner. 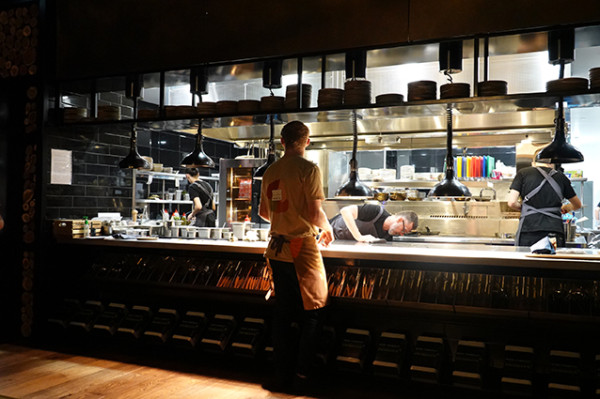 In the open kitchen I can see Tony Gibson, who worked with Connolly at Astral, drilling the team so every Prawn Cocktail ($26), made on toothsome Yamba prawns and crisp iceberg lettuce, comes out adorned with the correct amount of ‘tomato blush mayo.’ or whatever posh thing they’re calling Marie Rose sauce these days. 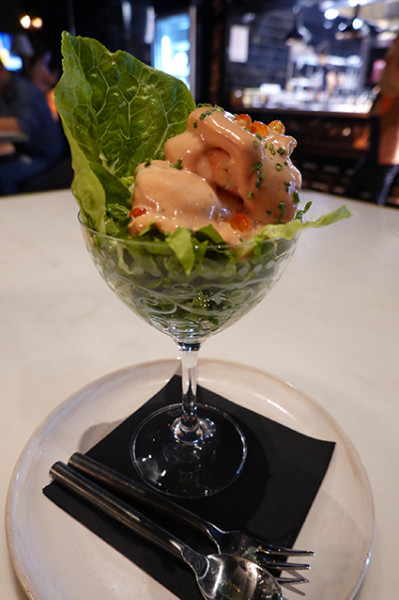 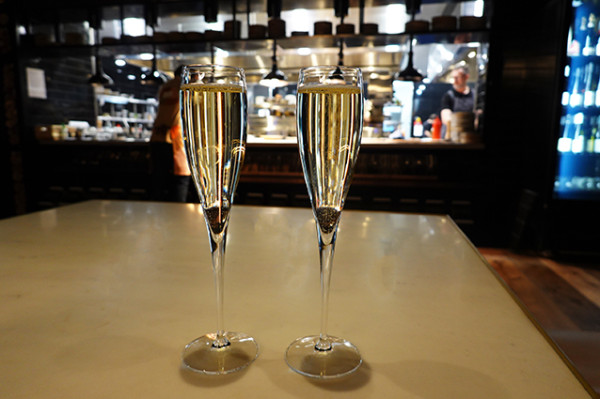 A few glistening pearls of roe, and it’s complete, and you’ll feel as fancy as your Mum did when she ate one in 1983.  Well-handled classics never get old - particularly when you have NV Pol Roger Brut Reserve ($155/bottle) on hand to go with them. 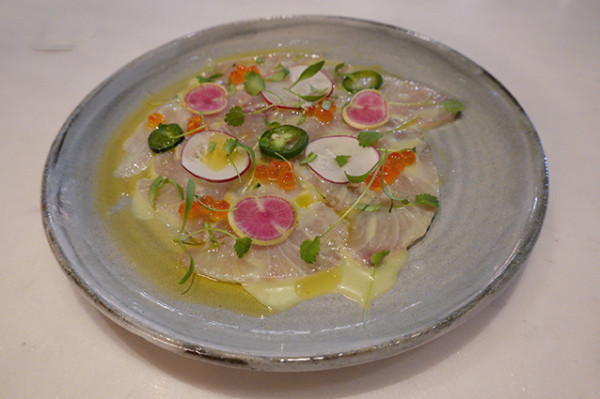 Connolly is not reinventing the wheel with this menu, but he is demonstrating to the Central Coast just how good updated classics can be. His pretty Kingfish Ceviche ($23) is partially ‘cooked’ with lime juice, and would be an easy-to-like segue for someone new to eating raw fish. 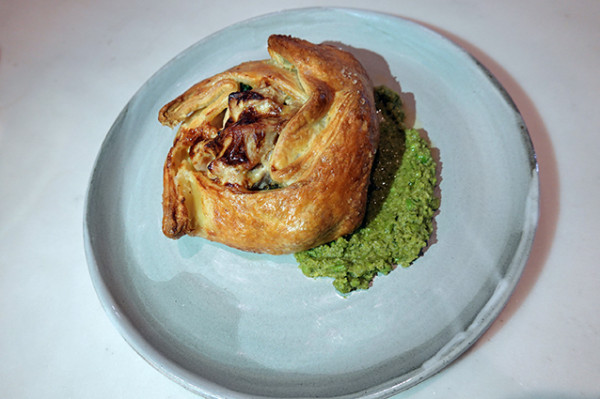 Yamba prawns also make an appearance in the Chicken and Prawn Pie ($28). Golden, buttery pastry retains its crisp bite while literally exploding with leek cream sauce when you cut into it. Tender, juicy chook, mushy peas and meaty whole prawns tucked around the pie’s base, make eating this pie a thoroughly enjoyable exercise - one that I’d like to repeat again in the future. 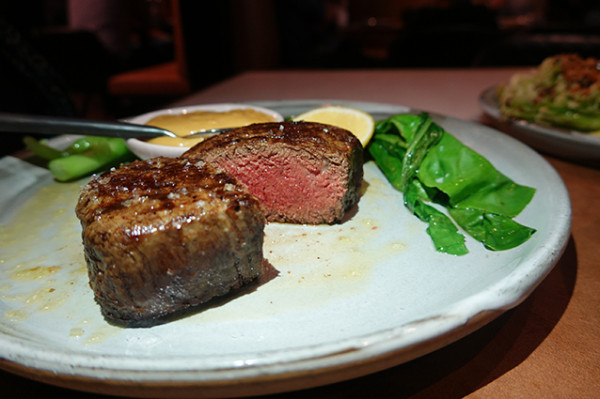 If there’s a better steak on the Central Coast than Connolly’s 250g Grasslands Eye Fillet ($50) I certainly haven’t eaten it. The flavour is perfect; the seasoning – down to textural salt flakes resting on the top - is perfect; the resting is perfect - it’s a bloody enjoyable piece of grass-fed meat, served with a miso-Hollandaise that's another strong suit. 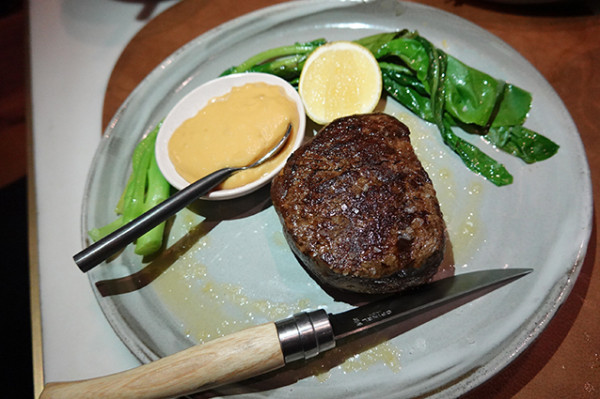 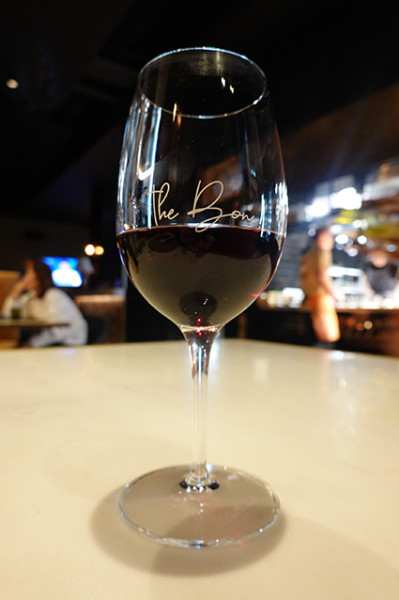 Mundt matches our steak to the 2015 De Iuliis Touriga Nacionale ($10/glass) from the neighbouring Hunter Valley. This red wine has got a lovely nose, and a silky-smooth palate with no grippy tannins. It feels like a bargain (at least to a Sydneysider) to drink a glass of nice wine in a fancy restaurant for just ten bucks. 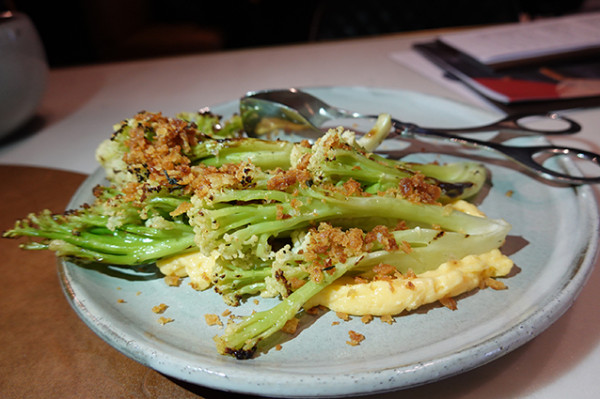 Mains aren't huge, so you probably will want a side or two. Don’t be afraid of Grilled Fioretto ($12) - it’s just a silly brand name for cauliflower that looks like broccolini (but is actually a cauliflower flower). Here it's well-teamed with a surprisingly tangy egg yolk jam and a crunchy dusting of breadcrumbs. 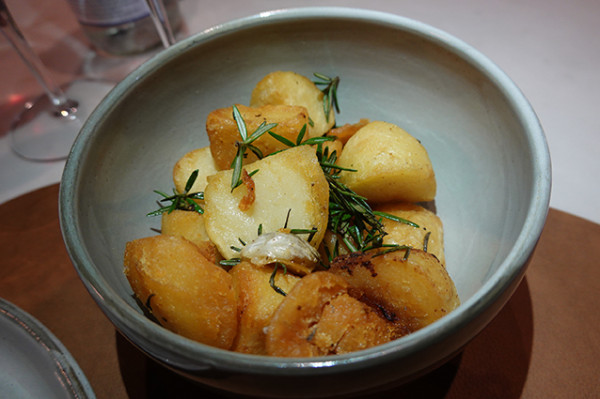 Duck Fat Potatoes ($12) are good, but not Simon Sandall good, so I’ve at least identified somewhere that Connolly can lift his game. 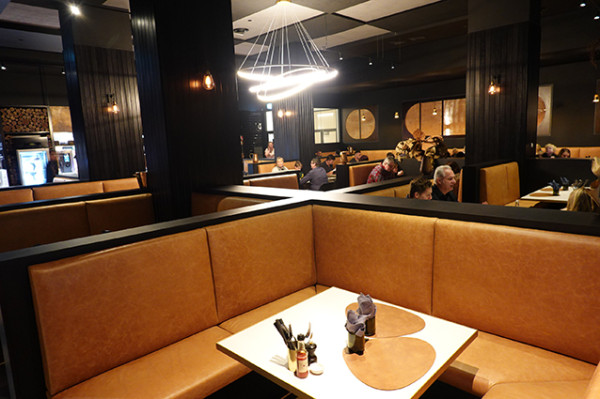 As we unwind into a soundtrack that includes the Rolling Stones, Janis Joplin and Jimi Hendrix’s rock ballad, The Wind Cries Mary, I ponder the Aussie bushfire colour palate of Bon Pavilion that extends to crisp, brown dried plant décor lining the entranceway. Bushfires, at least in indigenous fire management terms, are about regrowth and renewal, rather than destruction. This is a good motif for what The Bon Pavilion is hoping to achieve for Gosford. I wish them every success.